Doctors agree: School shouldn't start so early in the morning! 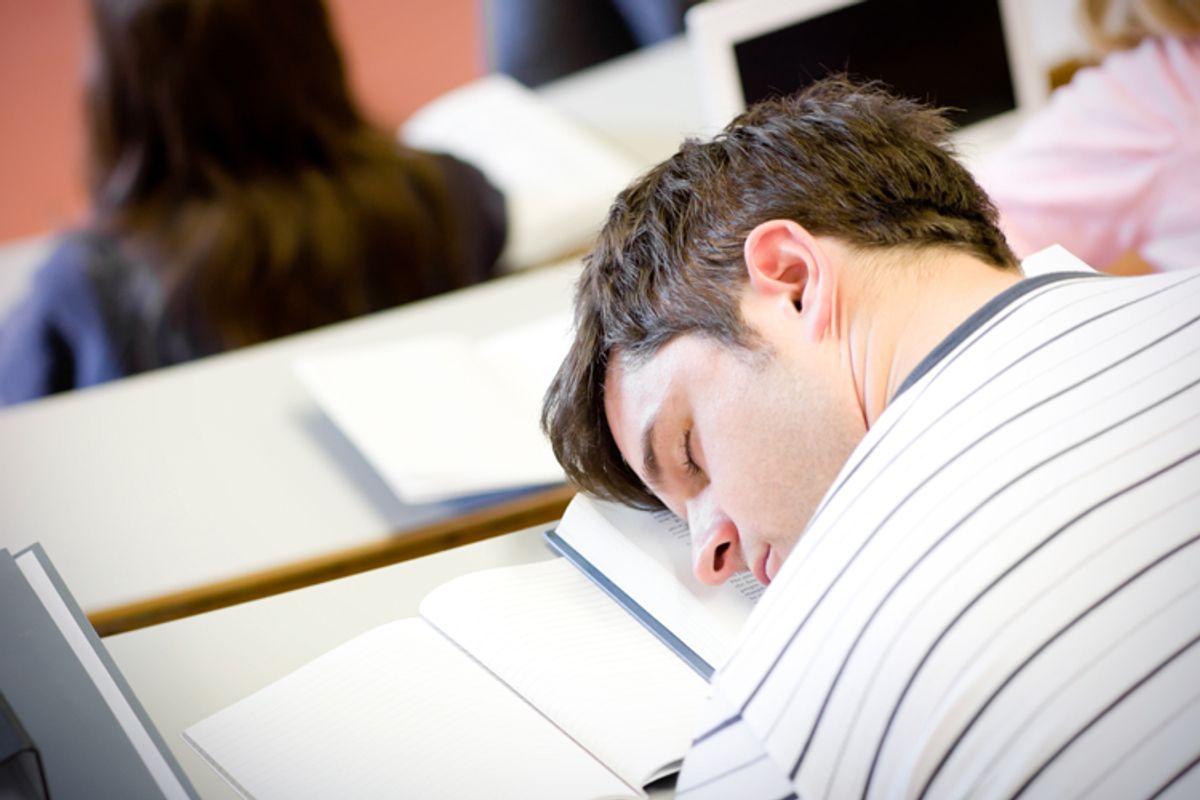 The influential American Academy of Pediatrics released an important new policy statement -- just in time for the start of a new school year.

Specifically, the AAP recommends an 8:30 a.m. start time for middle school and high school students. This change, the AAP says, could help stem sleep deprivation, which is the sad norm for many students across the nation.

“The research is clear that adolescents who get enough sleep have a reduced risk of being overweight or suffering depression, are less likely to be involved in automobile accidents, and have better grades, higher standardized test scores and an overall better quality of life,” Dr. Judith Owens told NBC. Owens, director of sleep medicine at Children's National Medical Center, led the team in issuing this policy statement.

“Studies have shown that delaying early school start times is one key factor that can help adolescents get the sleep they need to grow and learn,” Owens explained.

The decision to push back start times is ultimately left up to local schools, which are not required to follow AAP policy directives. And there has been much debate on the subject. A school's policy change must navigate demands of parents, teachers, extracurricular activities, bus schedules and potentially work schedules.

The AAP is not alone in making this recommendation. Last year U.S. Secretary of Education Arne Duncan suggested that schools start later to give students the opportunity to sleep in.

It is recommended that teens get nine hours of sleep per night. Most, between the ages of 15 and 17, received less than seven hours of shut-eye, according to the National Sleep Foundation.

Back in 2012, the Washington Post published an Op-Ed by Valerie Strauss and Abigail A. Baird, which stated that teens are "facing an epidemic of sleep deprivation." They also explain:

"If it was just a matter of early-morning fogginess this wouldn’t be a big deal, but sleep deprivation in teens has been linked to lower levels of Human Growth Hormone, which is integral to a teenager’s physical growth, brain development, and maturation of their immune system, as well as higher rates of anxiety disorders and depression. A 2010 study in the journal Sleep found that teenagers who go to bed after midnight are 24 percent more likely to suffer from depression and 20 percent more likely to consider harming themselves than those who go to bed before 10:00 p.m."

The fact that the AAP is recommending this shift -- and punctuating it with a definitive time, 8:30 a.m. -- marks an important place in the debate. One that is not lost on this medical group.

“The AAP is making a definitive and powerful statement about the importance of sleep to the health, safety, performance and well-being of our nation's youth,” Owens explained to NBC.

The organization, Owens stated "is both promoting the compelling scientific evidence that supports school start time delay as an important public health measure, and providing support and encouragement to those school districts around the country contemplating (the change).”