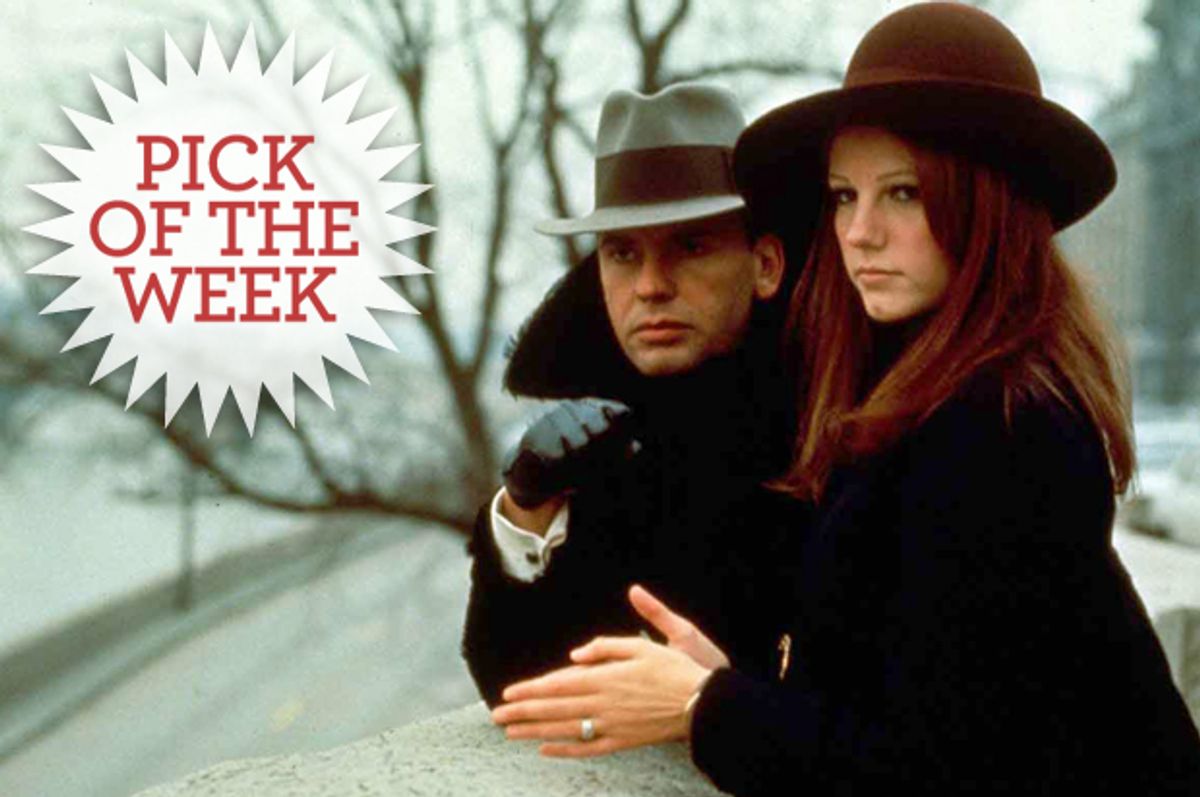 Jean-Louis Trintignant and Stefania Sandrelli in "The Conformist"
--

It’s easier to describe the historical importance and immense influence of Bernardo Bertolucci’s 1970 film “The Conformist” than to describe what it’s about, or to discuss the peculiar experience of watching it in 2014. Indeed, I suspect there is no separating form and substance with “The Conformist,” and the minute you say that it’s primarily an exercise in prodigious visual style, or that it’s a political thriller about a Fascist secret policeman on a murderous mission in France, you have committed an important taxonomical error. Either or both of those descriptions make “The Conformist” seem less peculiar, less sui generis, than it is. The unsettling blend of images and ideas in this movie cannot satisfactorily be disentangled or decoded, and it’s the very strangeness of Bertolucci’s masterpiece that has made it so influential in cinema history.

There are various substandard prints of “The Conformist” available on DVD or the Internet, but this new release is the result of a 2011 restoration from original source materials, supervised by cinematographer Vittorio Storaro and approved by Bertolucci. The differences may be subtle in any given scene, but the film as a whole is far more intense, and seems less like an artifact of a bygone era. That said, there’s no doubt that “The Conformist” may feel alienating or confusing to contemporary viewers accustomed to certain conventions of realism, and to stories constructed as a series of familiar “beats.”

That alienating effect was part of Bertolucci’s design from the beginning, which was driven more by a distinctive late-‘60s combination of Freudian psychology and Marxist ideology, and also by the confrontational mode of Brechtian theater, than by the Hollywood pattern. The acting in “The Conformist” is undeniably hit-and-miss, and sometimes deliberately histrionic in the Italian style. Iconic French actor Jean-Louis Trintignant gives a memorable performance in the title role of Marcello Clerici, an Italian aristocrat who volunteers to be a secret agent for Mussolini’s regime, but it’s the kind of performance that reveals by concealing. Clerici is a tormented but impassive figure, imprisoned beneath his debonair surface, who is able to watch a woman he loves being murdered with no evident emotion. (Trintignant’s dialogue was presumably dubbed into Italian by another actor, a common practice of the time.)

The story proceeds in great leaps from one episode to another, many of them unrealistic or dreamlike. In fact, it’s not so much a sequence of episodes as a sequence of images: Clerici goes from the vast, empty spaces of Fascist-modernist office buildings to a mental hospital that appears to be outdoors (in fact, it’s the Roman Colosseum) to a crowded ballroom of Parisian dancers who freeze in place to watch an apparent lesbian coupling between Clerici’s wife and his lover. Bertolucci and Storaro shaped not just film history but the aesthetic of advertising, design, fashion photography and music video. Again, the most memorable moments are blatantly artificial, as when the bars of light coming through Venetian blinds match the stripes on Stefania Sandrelli’s dress, or the famous shot when fallen leaves rush upward from the ground outside Clerici’s crumbling family mansion.

Even if you’ve never seen “The Conformist,” you’ve seen movies or TV episodes or commercials or other elements of visual culture that were shaped by it. To cite one example, I realized after this viewing that the murder of Adriana in “The Sopranos,” one of the most shocking scenes in David Chase’s landmark series, directly quotes the similar killing of a woman in a rural, wooded setting at the moral climax of Bertolucci’s film. Francis Ford Coppola’s “Godfather” films, especially the masterful “Godfather: Part II,” were heavily influenced by the flashback structure, expressionist color scheme and haunted, menacing mood of “The Conformist.” Storaro would go on to shoot several later Coppola films, most notably “Apocalypse Now," as well as the distinctly Bertolucci-like “Reds” for Warren Beatty.

As John Patterson of the Guardian has observed, the influence also went in the other direction: Marlon Brando went from “The Godfather” to Bertolucci’s “Last Tango in Paris,” and Robert De Niro (who played the young Don Corleone in “Godfather II”) later starred in Bertolucci’s “1900.” In between those two films, De Niro gave his iconic performance in Martin Scorsese’s “Taxi Driver,” a classic of nightmare expressionism that could almost be described a free-form American variation on the theme of “The Conformist,” complete with its unreliable narrator, perverse sexual subtext, violent climax and sustained mood of grotesque surrealism or hyperrealism.

“The Conformist” is a voyage into the past in two different senses, and indeed into two different pasts. It’s hard to say which one seems more distant to us today: the European avant-garde of the late ‘60s, when this film was made, or the high style and severe repression of Fascist Italy in the late ‘30s, the era it depicts. While the fashions and cars and hairstyles are all period-correct, and no one since Leni Riefenstahl had captured the modernist architecture of the Fascist era as Storaro did, you’ll only get frustrated if you expect the kind of dense historical drama that explains the social and political context of Fascist Italy.

Bertolucci was adapting a well-known postwar novel (by Italian writer Alberto Moravia), so the movie certainly has characters and a story. As the senior Fascist official who recruits Clerici observes, the latter’s motivations for serving the regime as a spy, informant and potential killer are not entirely clear. Moravia’s title echoes Clerici’s expressed desire to fit in, to be “normal,” a desire with roots in Clerici’s isolated, aristocratic upbringing, and also in a mysterious episode of childhood sexual abuse in his past. When Clerici goes to church to confess a long ago crime that seems to come with a lurid story attached, his priest wants to hear every detail – but then, once he learns that Clerici is affiliated with the Fascist secret police, grants a hasty absolution.

“The Conformist” has often been interpreted as a story about repressed homosexuality, and while that’s a possible reading it strikes me as unnecessarily reductive. Clerici becomes enmeshed in two overlapping triangles, one involving two men and another two women. If the former is officially about violence and the latter about sex, both can be understood as symbolic realms subject to multiple interpretations. Clerici is first instructed to infiltrate the circle of his former university professor, Quadri (Enzo Tarascio), now an anti-Fascist expatriate in Paris. Then, after a surreal interlude in a brothel on the French-Italian frontier, his orders change: Now he is to “eliminate” Quadri, at a time and place of his choosing.

But the Paris trip is also a honeymoon for Clerici and his dim, fashionable new bride, Giulia (Sandrelli), who immediately befriends Quadri’s seductive French wife, Anna (Dominique Sanda). Meanwhile, Clerici is relentlessly shadowed by Manganiello (Gastone Moschin), a veteran Fascist agent whose respectful and even servile manner clearly masks a darker agenda. (Coppola would enlist Moschin for a vital supporting role in “Godfather II.”) None of this, one might say, makes any sense: Clerici has no training as an assassin and doesn’t even know how to use a pistol, Quadri and his wife seem to understand the nature of Clerici’s mission the whole time, and anyway, what kind of third-rate spy agency sends a new recruit on his honeymoon and a dangerous mission at the same time?

But those are not the important questions. Like “Taxi Driver,” this movie has a profoundly damaged protagonist whose perceptions cannot be trusted. Whether the erotic triangle between Clerici, his wife and Anna or the triangle of violence between Clerici, the professor and Manganiello should be understood literally or as fantasy – and whether Clerici’s own memories of sexual abuse reflect objective reality – is never clear within the frame of the film. Indeed, it cannot be clear in this kind of film, which is meant to illustrate a psychological and political phenomenon that is still very much with us, in which an individual surrenders his autonomy, his sense of right and wrong and his ability to tell truth from lies, and willingly enslaves himself to a dominant ideology.

The restored version of “The Conformist” is now playing at Film Forum in New York, with other cities and home-video release to follow.