"Last Days in Vietnam": Is the humiliation of 1975 about to be repeated? 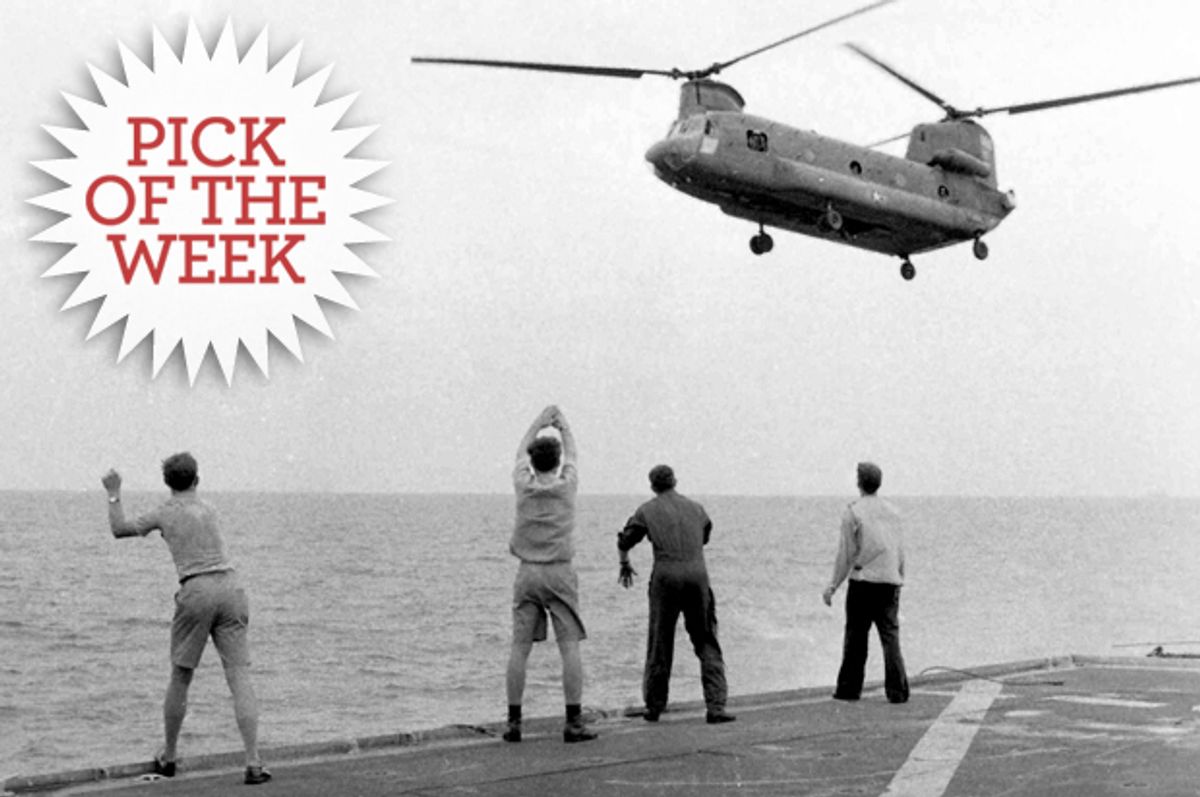 It’s become a commonplace of political discourse to say that Americans keep on fighting the Vietnam War over again in search of a different outcome, but that doesn’t make it untrue. One of the principal items of the neoconservative agenda, circa 2003, was to banish the “Vietnam syndrome” once and for all and refurbish American national pride by managing a successful conquest of Iraq. Look how well that turned out. When congressional hawks like Sens. Lindsey Graham and John McCain try to drag President Obama back into the Iraq War – which they seem to be accomplishing, inch by bloody inch – they are clearly haunted by the trauma of 1975, when the United States evacuated its last forces and watched the North Vietnamese Army roll into Saigon.

As one retired CIA official observes in Rory Kennedy’s mesmerizing documentary “Last Days in Vietnam,” that humiliating denouement, with its infamous photos of Marine helicopters pulling people off Saigon rooftops, was of a piece with everything that had gone wrong in Vietnam for years before that. Plans were botched or poorly executed or frantically changed at the last minute, promises were made and then broken, naive idealism was mixed with unbelievable arrogance. But one of the things that makes Kennedy’s film so powerful is that it’s not just a story of stupidity and tragedy and incompetence, although there’s more than enough of those qualities to be found in the history of America’s Vietnamese misadventure.

Of all things, “Last Days in Vietnam” is a tale of heroism, courage and selflessness; a tale about how many American servicemen, intelligence officers and diplomats risked their careers and in some cases their lives to rescue as many Vietnamese civilians as possible. These efforts ranged from an unauthorized CIA “black ops” program involving clandestine cargo planes loaded with people to the 18-hour helicopter airlift from the grounds of the U.S. Embassy to the enormous flotilla of Vietnamese commercial and naval craft that were escorted to the Philippines. One CIA officer drove a van around Saigon to collect the cooks and dishwashers who had worked for American agencies, and the tailor who had made the agents’ suits.

Even Graham Martin, the final U.S. ambassador in Saigon and a figure often mocked by historians and journalists, comes off here as immensely complicated. He was an old-time Cold Warrior with a diffident Ivy League demeanor, who had dithered over evacuation plans for months and refused to face the fact of imminent Communist victory. But Martin also felt an intense personal commitment to Vietnam; his only son had died in combat during the war, and he refused to leave the embassy until the last possible moment, when he received a direct personal order from President Gerald Ford to quit evacuating Vietnamese and get the hell out. Martin departed on the next-to-last chopper, after what was left of the South Vietnamese government had surrendered and North Vietnamese tanks could be seen on the streets a few blocks away.

Most of Kennedy’s film is about the dramatic, bewildering and occasionally inspiring chaos of late April 1975, when it became clear that the South Vietnamese military was crumbling and the end was near, but she also offers some crucial prehistory to those events. That’s where we want to look if we wonder whether the past is prologue, whether another Saigon-style humiliation awaits America in Baghdad. Just before his presidency disappeared into the Watergate morass, Richard Nixon had sent Henry Kissinger to Paris in early 1973, where he negotiated a cease-fire with North Vietnam followed by a total American withdrawal. But the Paris Peace Accords, as one observer notes in the film, were “a masterpiece of ambiguity,” crafted by Kissinger to mean different things to different people. For instance, the South Vietnamese government thought it was being promised continued American support, including airstrikes or renewed military intervention if the North violated the treaty. In retrospect, it appears that the North Vietnamese had a better understanding of American politics and public opinion; once the Yanks had pulled out they weren’t coming back, and the puppet regime in Saigon became easy pickings.

Add to all that the fact that a year and a half after the Paris agreement, Nixon was forced to resign. Whatever else you want to say about the guy, he had a shrewd strategic mind and many years of experience with foreign policy, whereas Ford, Nixon’s fill-in vice president, had been a little-known Michigan congressman with no experience in world affairs. When the North Vietnamese broke the treaty and sent 160,000 troops south in a massive invasion, Ford asked Congress for $722 million in emergency aid, which would not have been nearly enough to stem the tide and was rejected anyway. After the billions of dollars and 58,000 American lives that had been poured into Vietnam for no discernible purpose (beyond inflicting immense suffering on that nation and its people), there was no appetite in Washington or anywhere else to prolong the agony.

So Ford got the honor of presiding over the low point of the entire Cold War era, a Waterloo moment of American hubris brought crashing to earth. Through a collection of contemporary interviews with both Vietnamese and American survivors and fascinating file footage (a great deal of which I’ve never seen before), Kennedy makes this day-before-yesterday era feel startlingly present. A number of famous images are placed in context, including that still photo of a rooftop helicopter (not actually on the U.S. embassy) and those video clips of sailors pushing choppers off a ship into the ocean (to make room for more). Even Kissinger, that seemingly immortal war criminal, shows up to perform his gravel-voiced buck-passing ritual, insinuating that he understood the human costs of war the whole time and what went wrong was all the fault of shortsighted politicians.

Something like 130,000 Vietnamese civilians were evacuated around the time of the North Vietnamese victory, creating the bedrock for a new American immigrant community that would grow to at least 1.2 million people. Many more Vietnamese who worked for Americans or the South Vietnamese government were left behind, of course; analysts now believe that at least 100,000 civilians were executed by the new regime, while another 200,000-plus may have died in labor camps. What you take away from the tragic history of “Last Days in Vietnam” very much depends on what you bring to it. A core principle of neocon ideology – represented today, in rump-state form, by hawks like McCain and Graham – is that America should have sucked up the moral and financial cost and kept on fighting toward a glorious final victory. The long-term consequences, such people would argue, would have been continued American hegemony and an untormented American soul, or something like that.

Both in the context of Vietnam in the '70s and Iraq circa 2014, that seems not just like wishful thinking but an especially sadistic and nihilistic species of wishful thinking. But those of us who believe that both wars were stupid and self-destructive ideas in the first place also need to consider the historical evidence of “Last Days in Vietnam” with some humility. I have no idea whether we’ll be watching ISIS march into Baghdad in a year or two, or how many Iraqi civilians we’ll be willing to extract if that happens, and I don’t presume to know what strategy might best avert that eventuality. But what’s currently turning Obama’s hair gray, and should lead to sleepless nights for Hillary Clinton and Chris Christie and anybody else with half a brain cell who hopes to succeed him, is that the endgame of this imperial misadventure looks every bit as ugly as the last one.

“Last Days in Vietnam” is now playing at the Lincoln Plaza Cinema and Sunshine Cinema in New York. It opens Sept. 12 at the E Street Cinema in Washington; Sept. 19 in Boston, Los Angeles and Philadelphia; Sept. 26 in Irvine, Calif., San Diego, San Francisco and San Jose, Calif.; Oct. 3 in Chicago, Denver, Minneapolis and Seattle; Oct. 10 in Phoenix; and Oct. 17 in Atlanta and Houston, with other cities and home video to follow.