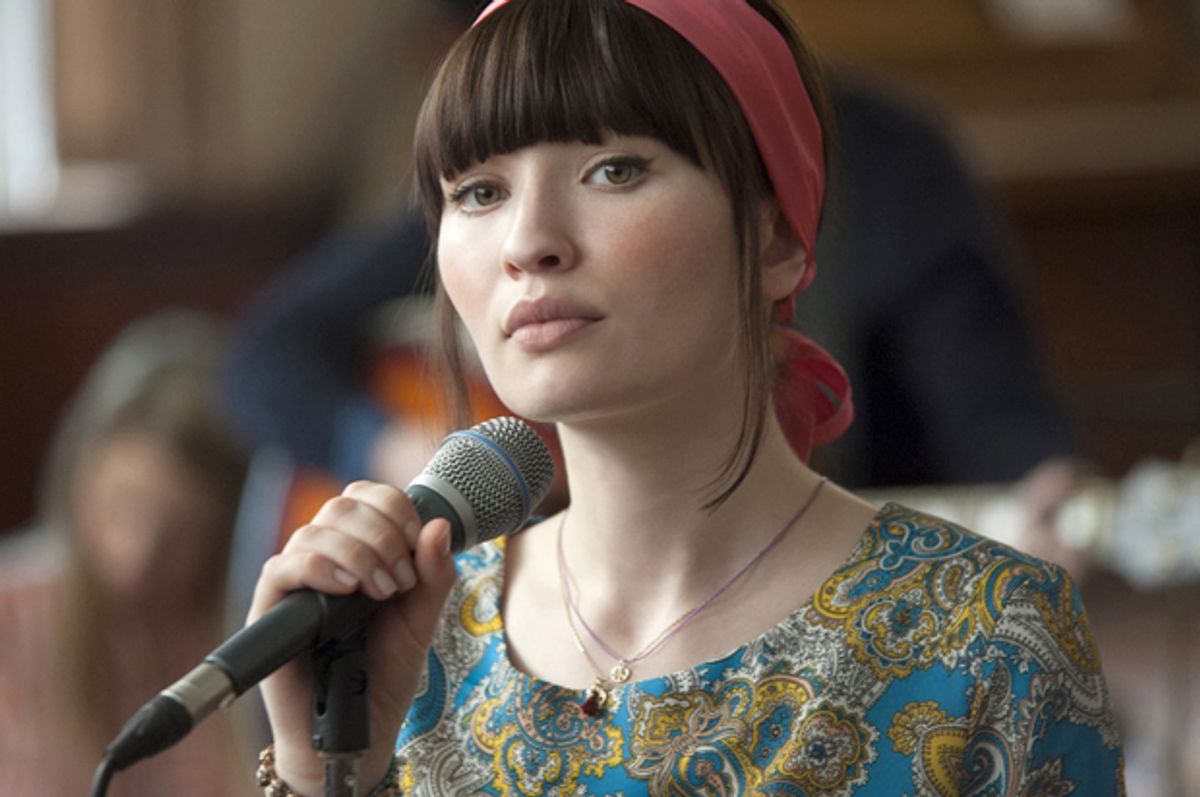 If you’ve been longing for the inevitable moment when Wes Anderson turns his attention to resuscitating the movie musical, your wish has been granted. Almost. That’s at least a reasonable shorthand description of the sunny and inexorably charming Glasgow-set musical “God Help the Girl” – at least, it’s as sunny and charming as a story about mental illness and suicide can get – which marks the writing and directing debut of Belle and Sebastian frontman Stuart Murdoch. This movie is a must-see for fans of Murdoch’s ornate pop craftsmanship, which finds a wonderful instrument in the personage of Aussie actress Emily Browning (of “Sucker Punch” and “Sleeping Beauty”). She’s already high on my personal list of “why the hell isn’t this person a movie star?” and turns out to have a marvelous singing voice as well as irresistible stage presence.

It’s easy to snark all over “God Help the Girl,” which is an exceedingly lightweight comedy-drama with pretty much the same plot as every other movie about arrested-adolescent outcasts who start a band. But if Murdoch’s not necessarily a natural filmmaker or storyteller, he has a clear artistic vision and largely executes it. For one thing, he makes one of the grayest and rainiest cities in the world look as balmy and sun-kissed as Cuernavaca. For another, the songs in “God Help the Girl” – most of which can also be found on the 2009 album of the same title – are some of Murdoch’s best since the late-‘90s heyday of Belle and Sebastian. To the extent that this movie is an extended music video starring Browning (with help from Olly Alexander and Hannah Murray, who play her winsome bandmates), it’s a pretty doggone delightful one.

In fact, Murdoch’s bittersweet songwriting aesthetic has always had a strong narrative element – ABBA meets Motown meets “The Umbrellas of Cherbourg” – and if musicals still existed as anything beyond novelty items, he’d probably have written six of them by now. His somewhat threadbare story is purportedly set in the present, although it's a present that feels a lot like Murdoch's youth in the '80s or early '90s. Eve (Browning) flees from the mental hospital where she’s being treated for anorexia and depression to her friendship, musical partnership and almost-romance with the impossibly nerdy and nervous James (Alexander), the least studly lifeguard in history and an aspiring singer-songwriter in his own right. They in turn recruit the posh and sheltered Cassie (Murray), and the least plausible pop sensation in Glasgow history is born. Eve has to choose between earnest but nebbishy James, a dreamboat Swiss-German rock star called Anton (Pierre Boulanger) and the pop-star destiny that may await her. If you have any questions about how that’s likely to turn out, let me refer you to something called “all other movies ever made.”

Some of the musical numbers in “God Help the Girl” – including the title tune, “Come Monday Night” and “I’ll Have to Dance With Cassie” – are so masterfully executed and charged with complicated emotion they elevate the whole movie to a level of weightless, post-teenage ecstasy it can’t quite maintain. Instead of inserting the obligatory minor-key emo number on the soundtrack during Eve’s two-thirds moment of crisis, Murdoch simply has her sing a lovely song about loneliness (“Musician Please Take Heed”). This isn’t a memorable or especially serious film, despite its nod toward “issues,” but it has an insouciant spirit all its own. It’s for those who love Belle and Sebastian, Emily Browning, the pop tradition of Scotland and the second-hand buzz emanating from Wes Anderson’s filmography, and I just can’t bring myself to get mad about any of that.

”God Help the Girl” is now playing at the Village East Cinema in New York and the Laemmle Royal in Los Angeles, with national release to follow beginning Sept. 12. It’s also available on-demand from Vimeo.