Even Judge Judy has taken pictures she "didn't want floating around"

Reminder to millennials: You did not invent compromising photographs 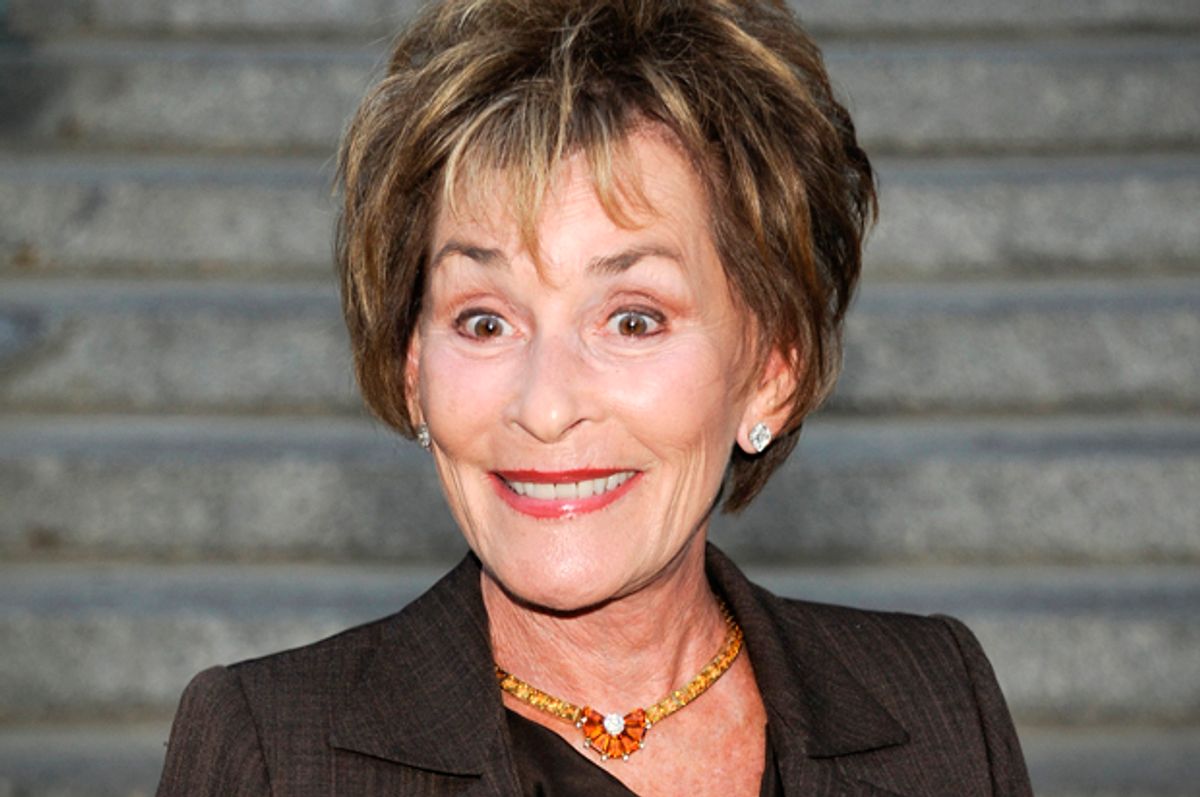 Of all the things we learned over the past few weeks of what will go down as the Great Celebrity Nude Leak of 2014, surely nobody expected this: the revelation that once upon a time, there were incriminating photos of Judge Judy out there somewhere. And you thought Jennifer Lawrence invented nudity. Judge Judy, you saucy girl!

I admit that I generally avoid all things Judge Judy-related, because when I want cantankerous, verbally abusive content, I have the Internet. But as Rich Juzwiak irresistibly points out on Gawker, her honor appeared this week on "The Talk" to discuss the hacked nudes and admitted that "I'm not a prude, and I say this from experience." She then said that during her second marriage, "I cut up all those pictures that I didn't want to see floating around, because you have to be smart enough to say if you don't want to revisit something and because of the world that we live in, your boyfriend today isn't going to be your boyfriend 30 years from now." And then she added the terse warning, "Don't take the pictures."

Of course, by her own admission, Judge Sheindlin was operating in a period in which eradicating photographs "you don't want to revisit" could be a matter of simply cutting them up. In the digital age, it's considerably more complicated to put our naked genies back in their respective bottles. In fact, it's basically impossible, a reality that has given us unfortunate Jason Segel movies and the word "fappening."

Though Judy's photos are apparently lost to the ages, her candid admission is a gentle reminder that humans, even famous humans, have been taking their clothes off – sometimes in front of other people and sometimes in the presence of cameras – for some time now. Though the devices have changed, the act itself is not a recent development. You can look at the screen careers of Sally Field, Goldie Hawn, Julie Andrews and Romy Schneider and see nudity galore. In their early careers, Arnold Schwarzenegger, Sylvester Stallone, Madonna, Vanessa Williams and Marilyn Monroe famously and verifiably posed nude. And though the images purporting to be of Greta Garbo, Jean Harlow, Lucille Ball, Burt Lancaster and Joan Crawford that abound on the Internet -- as well as an incredibly cute series of images long believed to be of Betty White (that I sincerely hope are authentic) -- remain somewhat more in dispute, it should be clear that taking naked pictures was not something Steve Jobs came up with as a way to sell iPhones. It's not even something that grew out of the now ubiquitous career-ascending or -descending Playboy pictorial that first caught on in the '90s, or the conveniently leaked, attention-getting sex tape that was de rigueur for every reality star of the 2000s.

The main difference between times long past and now is that the release of nude photographs – especially those released without the party's consent – doesn't have to be a threat to the person's personal life or career. Despite the robust revenge porn industry, you can find plenty of people willing to not look at images that were not intended for their eyes, and that's a marginal sign of progress. Oh, and there used to be a whole lot more pubic hair. That's the other thing. If Judge Judy had been born in a different time, she wouldn't have had the option of just cutting up all the photos she didn't want hanging around. But human nature being as persistent and predictable as it is, I'll bet she'd still have taken them anyway.