“Cable companies could make this page so slow, it will still be loading”

The FCC may soon make your Internet a lot slower. Here's what a huge coalition is doing today to stop them 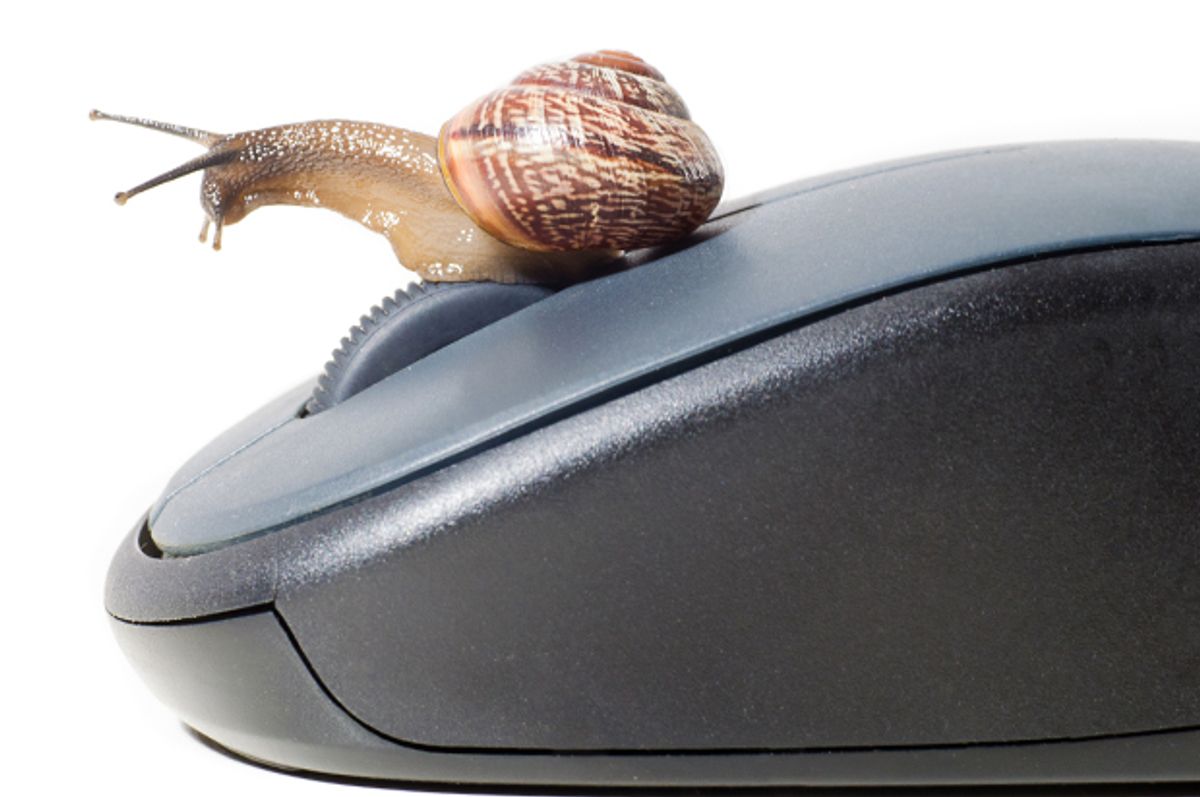 The “spinning wheel of death” icon you may see at your favorite websites today does not mean you forgot to pay your broadband bill. It’s part of a large-scale event designed to raise awareness and drive activism around net neutrality, the idea that Internet service providers should offer equal access to every page on the Web. Leading websites like Netflix, Upworthy, Kickstarter, Digg, Reddit, Wordpress, Etsy, Boing Boing, Vimeo and Meetup – along with dozens of participating organizations from the American Civil Liberties Union to the Sierra Club to Democracy for America – are participating in what they’re calling the “Internet Slowdown.” Anyone who has a website can get the code and join the protest; even pornography sites are taking part, which certainly guarantees a wide level of, let’s say, outreach.

Participating sites will still load at the same speed – but the spinning wheel is meant to dramatize what would happen if Federal Communications Commission chairman Tom Wheeler, a former cable industry lobbyist, succeeds in creating an Internet “fast lane.” Under a proposal put out by the FCC in April, companies could pay Comcast or AT&T or Verizon to speed their preferred content to consumers more quickly. This paid prioritization would create a permanent digital divide, reducing competition and innovation on the Internet and discriminating between content for the first time.

Amid a massive backlash, which included a group of activists “occupying” the FCC, Wheeler argued that the FCC would not allow telecoms to “divide haves and have-nots,” saying that under his strategy, the agency would police any abuse of the fast lane on a case-by-case basis. More important, the proposed rules offer a choice, between the Wheeler proposal and a plan that would reclassify broadband Internet as a common carrier service, like phone lines, giving the FCC stronger authority to ensure that no company could discriminate against any kind of content. “We look at reclassification as the only path forward for real net neutrality protections,” said Tim Karr, senior strategy director at Free Press, one of the organizations putting together the Internet Slowdown. “The issue is about our rights to control our Internet experience.”

The FCC’s public comment period for its new Internet rules closes Sept. 15. So during the Internet Slowdown – where the spinning wheel icon will be accompanied by text like “Cable companies could make this page so slow, it will still be loading” – users will be encouraged to sign a letter to the FCC backing reclassification and opposing Internet fast lanes, through an action website called Battle for the Net. The letter will also forward to congressional representatives and the White House. In addition, if users leave their contact information and ZIP code, they will receive a phone call connecting them to the office of their member of Congress, so they can register their personal support for net neutrality.

Even though 4 million people have already delivered comments to the FCC – “it’s the largest response on any rule making in their history,” Karr told Salon – with near-unanimous support for reclassification, the groups organizing the Internet Slowdown feel the issue could still benefit from increased public awareness. The participation of so many websites and advocacy groups ensures that tens of millions of people will see the message today that Internet content should remain free of discrimination. And it’s likely to be just the beginning. “This is an escalation, but it leaves room for further escalation,” said David Segal of Demand Progress, another organizer of the Slowdown.

This public awareness campaign resembles the “Internet Blackout,” which a similar coalition used to prevent the Stop Online Piracy Act (SOPA) from passing Congress in 2012. SOPA was a gift to the movie and music industries, which would have enabled the shutdown of websites based on subjective copyright claims. Hundreds of sites, including Wikipedia, redacted their content, instead posting links to help people contact their representatives. Tumblr claimed they generated 3.6 calls per second that day. The bill never even got a vote, as lawmakers quickly pulled their endorsements.

At the outset, protecting net neutrality appeared to be a much bigger lift. The FCC is a regulatory agency, seemingly not as responsive as members of Congress who face reelection. Asking the FCC to affirmatively pass reclassification is harder than asking lawmakers to not pass a bill. Stopping SOPA had a trans-partisan coalition, while conservatives believe reclassifying broadband as a common carrier service would cause excessive regulation of the Internet. And incumbent companies rich enough to pay fees to get on the fast lane might welcome the opportunity to muscle out competition that cannot afford it. For example, while the biggest corporations on the Internet – such as Netflix, Google, Facebook and Amazon – have publicly come out in opposition to chairman Wheeler’s rules, only Netflix has so far agreed to participate in today’s Internet Slowdown. Google and Facebook have not responded to requests for comment from Salon or other outlets.

Despite these obstacles, activists have impressively built a coalition of Internet users and businesses that have actually shifted the center of gravity on the issue. They targeted Wheeler’s Democratic counterparts on the FCC, Jessica Rosenworcel and Mignon Clyburn, who have been reluctant to go along with the Wheeler proposal and sell out net neutrality. They pressured Democratic Leader Nancy Pelosi and even President Obama to come out against the concept of fast lanes (amazingly so, as the president contradicted the agency head he appointed). They got reclassification into the debate when at one point it seemed like a pipe dream. And they constructed an event to rival the Internet Blackout. “We want this to be the biggest online action since SOPA,” said Tim Karr of Free Press.

For someone like me who worked his way into journalism from a personal blog, there would be no way to do what I do without the protections of an open Internet. In a country increasingly dependent on Internet use, people intuitively understand that controlling their daily Web experience will lead to disastrous outcomes. The forces fighting for the Internet are using old-fashioned methods – calls and letters, protests and mass collective action – to protect the most modern technological achievement. Do we still have a society where organizing against concentrated power matters? We’re about to find out.