The new "MTP" moderator will inevitably be weighed against Tim Russert. Chuck Todd should forge his own path 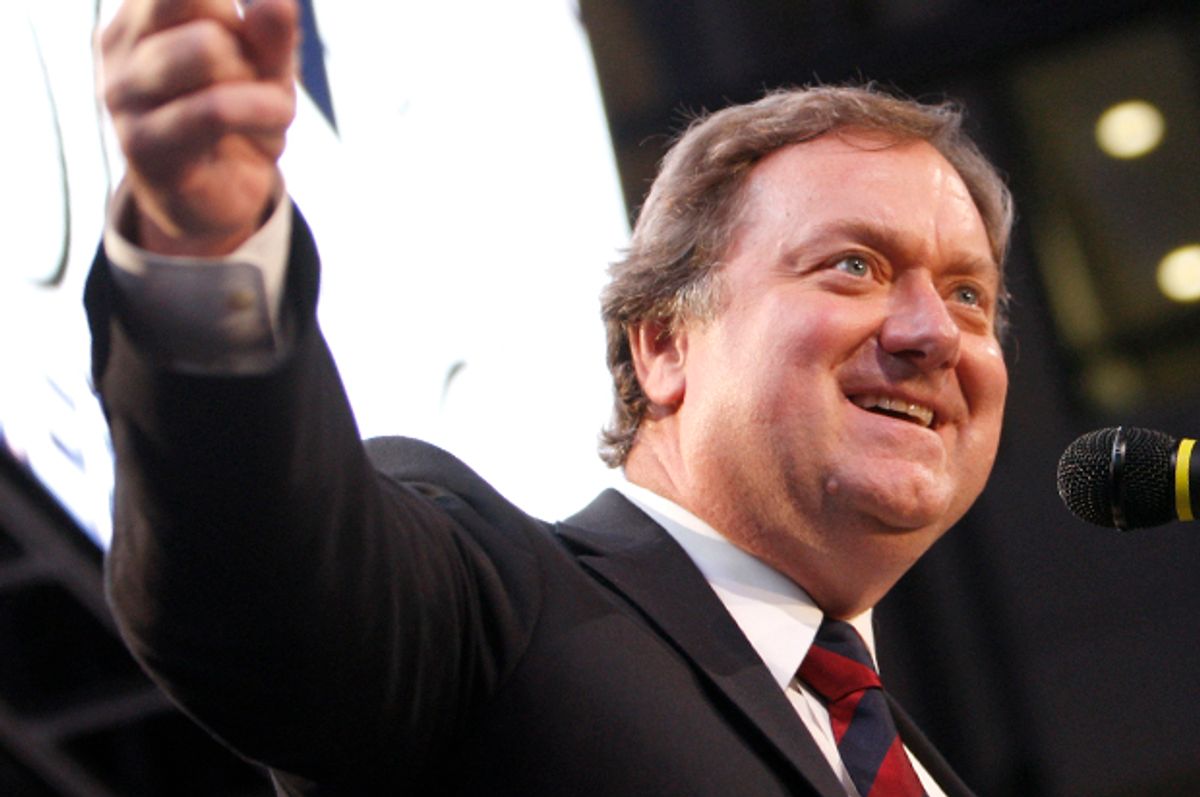 "Meet the Press" is back, baby. The longest-running show in TV history, and the pride of NBC News, placed first in the Sunday morning ratings for the first time in many months. That's no surprise. It was new moderator Chuck Todd's inaugural broadcast and featured a one-on-one interview with President Obama, who had much news to discuss. As the weeks go on we'll see if Todd can maintain such a lead, or whether he, like moderator David Gregory before him, will struggle to surmount the not especially stiff competition of Bob Schieffer and George Stephanopoulos.

What kind of show does NBC News want? A "No. 1 show" is likely where the demands begin and end. How Chuck Todd gets there will be up to Chuck Todd. He will not be compared to his immediate predecessor. David Gregory left no "legacy." He's only been out of the job for a few weeks and only a smattering of political television-consuming human beings remember that he even existed. Todd will be compared, just as Gregory was, to Tim Russert, who hosted the program from 1991 until his sudden, sad death in early 2008.

The longer Gregory's slide went on, the more we would hear about Russert, whose legend was well constructed during his life and since has only grown into something more, something close to journalistic near-perfection. He was charismatic, tough, unrelenting, and managed to command the grudging respect of those whom he sought to destroy. No one got off the hook with Tim Russert (except for those who got off the hook). And, most important, he got those fat ratings every Sunday morning.

And now that Todd has replaced Gregory, positive reviews of his debut last week are being compared to, yes, the myth of Russert. In the New York Times this week, Alessandra Stanley praised "Tim Russert’s signature move. .. the go-to-the-video moment: Every Sunday, his show became an delicious cat-and-mouse game in which Russert would invite his guests — senators, governors, political consultants — to express their views and then he would whip out a tape of an old interview when they said the opposite."

Russert was certainly the most prepared journalist of his time. Whether he was grilling a politician on "Meet the Press" or in a presidential debate, he had done his research, and had every questionable or inconsistent comment from interviewees over the span of their lifetimes jotted down on notecards. Where he most frequently erred, though, was in being prepared in the wrong, or least interesting, way -- he sought to humiliate a politician for the sake of humiliating a politician, no matter how inane the subject matter, rather than using his interviews to enlighten and inform public debate. He was the one who famously popularized the "gotcha" attack and drew great throngs of viewers craving their Sabbath fix of sadism. Russert, at his worst, represented the nadir of the post-Watergate journalism gone awry, in which "collecting a scalp" became the primary goal in and of itself, even when a scalping wasn't warranted.

Russert's most common move was to take conflicting statements from an interviewee -- no matter how many years apart -- read them to the interviewee, and then shame the interviewee for a while about their character before, weirdly and abruptly, smiling and calling for a commercial break. (Sometimes it wasn't even taking conflicting statements -- he also popularized the irritating habit of asking a politician "ARE YOU RUNNING FOR PRESIDENT?" 10 million times in a row, Jack Bauer-style, as though a nuclear device would explode in the downtown of a major American city if they refused to make up their mind on the spot.) He could never accept that a politician's views might evolve. Even worse, his body slams typically glossed over more substantial policy questions in favor of the cheaply earned squirm. Matt Yglesias described a typical moment of this in 2007.

Actually, the balls Russert favors may be hard, but the pitches he throws aren't curveballs, which go someplace useful. They're sillyballs, which go somewhere pointless. Russert has created a strike zone of his own where toughness meets irrelevance. John McCain entered the zone last May, when he went on the show and repeatedly asserted that the Bush tax cuts had increased the federal government's revenue. Hearing this, a tough but conscientious journalist might have pointed out that this is demonstrably false. Russert, however, reached for a trusty hardball and sent it sailing. McCain, he pointed out, was now supporting extending the very same Bush tax cuts that he had once opposed.

Well, yes, but this was a bit like asking someone who says the world is flat why he used to say the earth was round. The contradiction Russert pointed out was real—but hardly central. In fact, if tax cuts actually had increased revenues, then McCain's change of heart would have been perfectly logical. The real problem was that McCain's theory of the relationship between tax rates and revenue wasn't true. In Russertland, though, as long as you acknowledge the contradiction, the questioner is satisfied. "You say the world is flat, but just three years ago you said it was round." "You know, Tim, yes, I used to say the world was round, but times change, and that's why I support the Bush administration's bill to construct a restraining wall to prevent ships from sailing over the edge of the sea." And so on.

Russert's master showmanship too frequently started from a presumption of guilt and fed the paranoid assumptions of total crookedness. This could lead him down the wrong roads. During the '90s he fed the ultimately hollow Clinton conspiracy theories -- Travelgate, Troopergate, Whitewater, etc. And in one of his lowest moments, when Hillary Clinton was running for the Senate in 2000, he -- as many others, weirdly, did at the time -- tried to "slam" Hillary Clinton for her role in, umm, her husband's constant adultery.

Russert: The issue of trust and character has been raised repeatedly in this campaign. Mrs. Clinton, I want to start with you. In January of '98, you went on the "Today" Show and talked about what had occurred at the White House. I want to play that for you and our viewers and our voters and give you a chance to respond.

Lauer: So these charges came as big a shock to you as anyone.

Lauer: And so when people say there's a lot of smoke here, your message is ... Where there's smoke ...

Clinton: There isn't any fire.

Lauer: If an American president had an adulterous liaison in the white House and lied to cover it up, should the American people ask for his resignation?

Clinton: Well, they should certainly be concerned about it.

Lauer: Should they ask for his resignation?

Russert: Regrettably, it was proven true. Do you regret misleading the American people?

Clinton: Well, you know, Tim, that was a very painful time for me, for my family, and for our country. It is something that I regret deeply that anyone had to go through. And I've tried to be as forthcoming as I could, given the circumstances that I faced. Obviously, I didn't mislead anyone. I didn't know the truth. And there's a great deal of pain associated with that, and my husband has certainly acknowledged that and made it clear that he did mislead the country, as well as his family.

"Gotcha" journalism can be as gimmicky as you're willing to take it. Russert seemed over the years to experiment with his "gotcha" techniques, much like the Beatles did with multitrack recording. This is where "the trap" would come in. What fun these were! In this clip from a presidential debate, Russert reads Hillary Clinton an anonymous quote from a politician musing about the acceptability of torture in a ticking-time-bomb situation. Clinton responds that, well, U.S. policy is not to torture. Who was the anonymous fellow being quoted? Russert, in cringeworthy, reality-show host fashion, drops the bomb: "William. Jefferson. Clinton."

Russert's gimmick was growing tired by the time of his death. He was slammed from the left and right for the "inanity" of his techniques in debates and as host of "Meet the Press" during the 2008 presidential cycle, when there were actual interesting policy splits within the parties worth exploring. Had Russert lived and continued hosting the show, he could have ended up like Thomas Friedman: someone whose "brand" kept him going, but whose style and techniques had long ago become mockable shtick. David Gregory's failure was in trying to continue the Russert shtick without ever having built up the brand.

Chuck Todd has an opportunity to change all of this and make political journalism all the better for it, if he so chooses. He can get away from the temptation to "slam" each and every interviewee who graces his set. We know well enough by now that politicians are frequently opportunistic and hypocritical, and the quest for discoveries of such behavior become less titillating and more forced. What would be novel is a more straightforward approach. No one understands what the hell is happening in Washington anymore, if they ever did. We still have standoffs over the debt ceiling every time it needs to be raised because people don't understand what the debt ceiling is. How about the next time there's a debt ceiling standoff, we don't have an Republican National Committee spokesperson debate a Democratic National Committee spokesperson about it? Or we don't go for the easy "well, you voted against raising it before but now you want it raised" slam? How about having some people come on "Meet the Press" and explain what the debt ceiling is, and why breaching it is bad. That would be a much more edifying segment than yet another Lexis-Nexis printout that shows how John Boehner and Barack Obama have inconsistencies in their records.

Maybe when Tim Russert devised his style it was needed. Maybe there weren't enough mainstream media figures out there calling bullshit on hypocrisies. Well, it's 2014, and we have a firmly established understanding of politicians' hypocrisies at this point -- they exist. What else you got?