Rosie O'Donnell's honest confession on the mixed blessing of being thin

On her first day at "The View," she admits the "turbulence" of weight loss 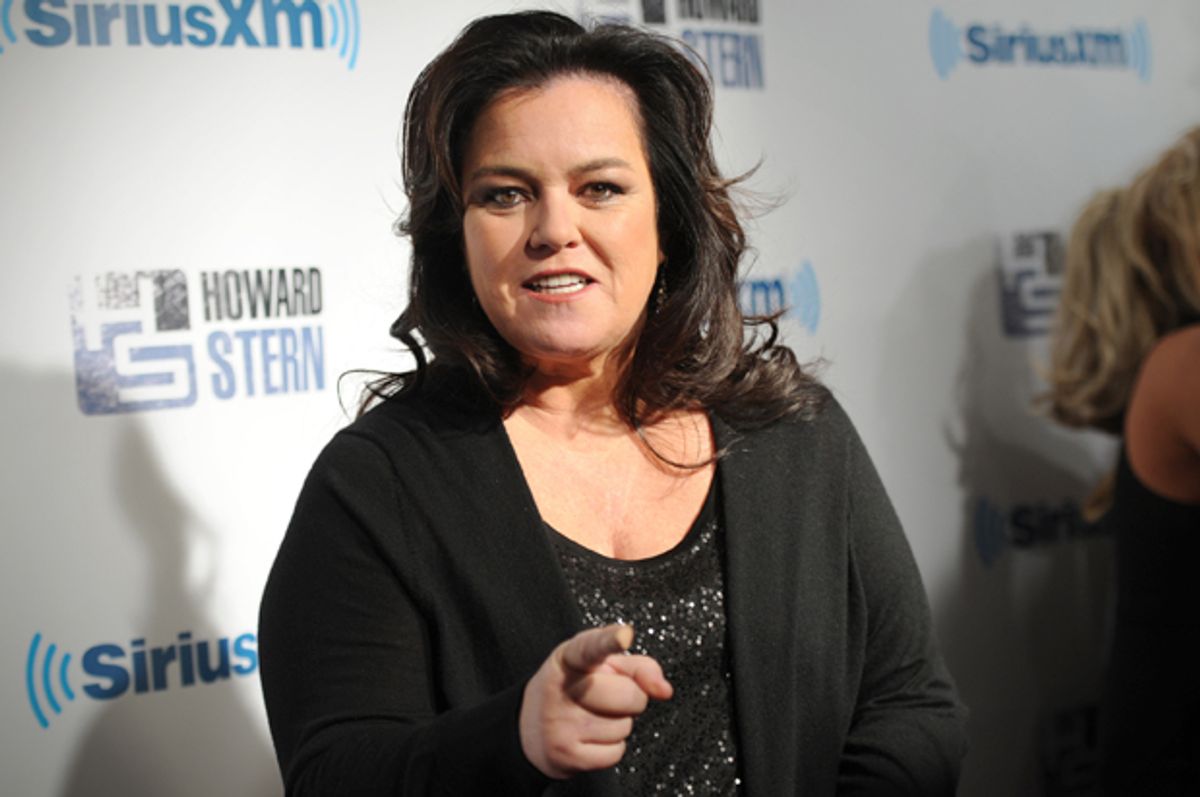 Our culture obsesses on weight. We equate fat with laziness and moral failure; we reward people for getting thin. So it was a moment of honest, awkward truth when Rosie O'Donnell returned to co-hosting "The View" Monday and revealed that her recent 50-pound loss was not in fact the most amazing, fantastic, glorious thing that ever happened to her. That, in fact, it was a mixed blessing.

Speaking on the season premiere of the show she famously parted ways with a few years ago, the newly slimmed down O'Donnell talked about the "massive heart attack" she had two years ago and the vertical gastric sleeve procedure she had a year later. She says that "Since then, I can't ignore it anymore. It's not like I don't want the cupcake that I saw, I just know that that's not a good choice." And she admits, "The fact that I look so different has been difficult and unexpected. Everyone assumes that obese people would just be jumping for joy that they were healthier and thinner and able to fit into store-bought sizes, we don't have to go to the plus store. But it's also filled with a lot of emotional turbulence, you wouldn't expect." She went on to explain, "There are many issues for why people gain weight. Some gain weight as a layer of protection. To keep people away from them. I never wanted someone to want to approach me in a sexual manner because of my physical body because of child abuse issues. I think they are all interwoven and they don't exist separately, so they come up, and I'm having to put out fires and talk to my therapist and get through it and find a different way to cope with my anxiety and my feelings of PTSD rather than eating over them."

Any kind of physical transformation – even an ostensibly positive, healthy one -- is an identity shift. It takes time to adjust to being different, and to the different ways that people treat you. And as O'Donnell herself acknowledges, for some, weight can form a protective barrier between the person and the outside world. When your outside persona has been built around being the big girl, what happens when you're not that big girl anymore?

It's been a long time since I walked in those suddenly looser pants, but I know the feeling. After spending my entire adolescence as the Chubby Friend, I lost, over the course of several months in college, more than 40 pounds. And because much of the dramatic initial loss took place over a summer, I still recall returning to school in the fall and being surprised and unprepared for the response my new body invited. I was an awkward teenager, but suddenly I was getting catcalls on the street. Suddenly a professor assumed – and told me – that my request to change partners on a class project must have been motivated by a sexual history with him. I had, over the span of a relatively short space of time, traded in one set of people's assumptions about me for a seemingly directly contradictory new set. What I learned was that whether you're fat or thin, people will make judgments about the person you are based on the size you are, and sometimes it's hard not to internalize those judgments. Our bodies, but especially women's bodies, are often treated as public property. Simply walking down the street can be viewed as an invitation for critique and interpretation. The overweight girl is indolent and weak. The thin one is vain and sexually available. It was hard enough back then; it's a whole different kind of challenging in a culture in which it's an actual job for a bottomless array of sites to scrutinize women and pick them apart for the size of their butts. I don't envy my daughters.

I've managed to stay roughly the same size in the more than two decades since that initial weight loss, by remaining active and maintaining a relatively healthy diet. If you have a choice between running the risk of a "massive" heart attack and being in a less extreme and endangering size range, I totally endorse the latter, as, I suspect, would O'Donnell. Despite her admission of "emotional turbulence" along the way, she says, "A lot of marriages break up once one person gets healthy. Luckily, my wife is very healthy, always been healthy, loves me and encourages me to be healthy." It's OK to be happy for someone who's achieved a lifestyle change for her health. But it's OK to also acknowledge that change can be fraught with some pain as well. And to offer the message to others that O'Donnell does, one that is too often left out of those smiling "after" photos, that a big weight loss can be a good thing, but that "It's also full of anxiety and vulnerability."