The racial parenting divide: What Adrian Peterson reveals about black vs. white child-rearing 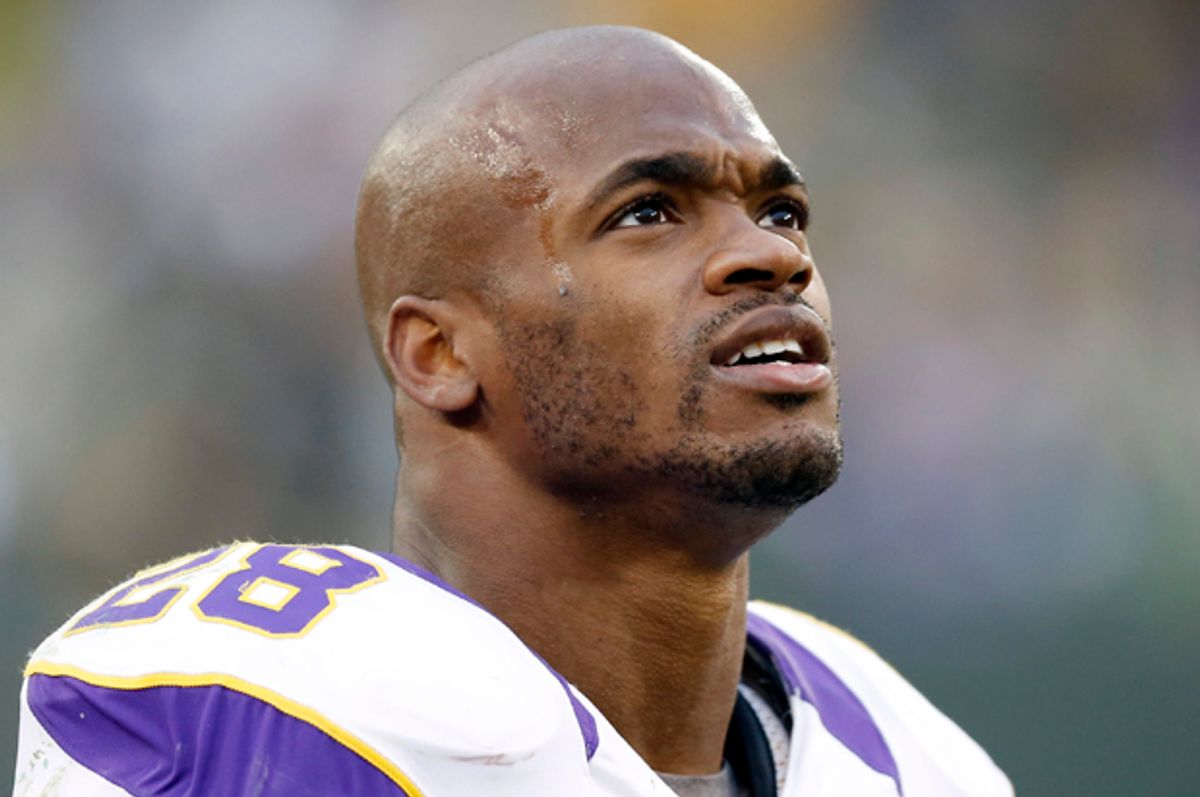 In college, I once found myself on the D.C. metro with one of my favorite professors. As we were riding, a young white child began to climb on the seats and hang from the bars of the train. His mother never moved to restrain him. But I began to see the very familiar, strained looks of disdain and dismay on the countenances of the mostly black passengers. They exchanged eye contact with one another, dispositions tight with annoyance at the audacity of this white child, but mostly at the refusal of his mother to act as a disciplinarian. I, too, was appalled. I thought, if that were my child, I would snatch him down and tell him to sit his little behind in a seat immediately. My professor took the opportunity to teach: “Do you see how this child feels the prerogative to roam freely in this train, unhindered by rules or regulations or propriety?”

“Yes,” I nodded. “What kinds of messages do you think are being communicated to him right now about how he should move through the world?”

And I began to understand, quite starkly, in that moment, the freedom that white children have to see the world as a place that they can explore, a place in which they can sit, or stand, or climb at will. The world, they are learning, is theirs for the taking.

Then I thought about what it means to parent a black child, any black child, in similar circumstances. I think of the swiftness with which a black mother would have ushered her child into a seat, with firm looks and not a little a scolding, the implied if unspoken threat of either a grounding or a whupping, if her request were not immediately met with compliance. So much is wrapped up in that moment: a desire to demonstrate that one’s black child is well-behaved, non-threatening, well-trained. Disciplined. I think of the centuries of imminent fear that have shaped and contoured African-American working-class cultures of discipline, the sternness of our mothers' and grandmothers' looks, the firmness of the belts and switches applied to our hind parts, the rhythmic, loving, painful scoldings accompanying spankings as if the messages could be imprinted on our bodies with a sure and swift and repetitive show of force.

I think with fond memories of the big tree that grew in my grandmother’s yard, with branches that were the perfect size for switches. I hear her booming and shrill voice now, commanding, “Go and pick a switch.” I laugh when I remember that she cut that tree down once we were all past the age of switches.

And then I turn to Adrian Peterson. Not even a year ago, Peterson’s 2-year-old son, whom he did not know, was murdered by his son’s mother’s boyfriend. More recently, Adrian Peterson has been charged with negligent injury to a child, for hitting his 4-year-old son with a switch, in a disciplinary episode that left the child with bruises and open cuts on his hands, legs, buttocks and scrotum.

In the text messages that Peterson sent to the boy’s mother, he acknowledged having gone too far, letting her know that he accidentally “got him in the nuts,” and that because the child didn’t cry, he didn’t realize the switch was hurting him. It would be easy to demonize Peterson as an abuser, but the forthrightness with which he talked about using belts and switches but not extension cords, because he “remembers how it feels to get whooped with an extension cord,” as part of his modes of discipline suggests he is merely riffing on scripts handed down to him as an African-American man.

These cultures of violent punishment are ingrained within African-American communities. In fact, they are often considered marks of good parenting. In my childhood, parents who “thought their children were too good to be spanked” were looked upon with derision. I have heard everyone from preachers to comedians lament the passing of days when a child would do something wrong at a neighbor’s house, get spanked by that neighbor, and then come home and get spanked again for daring to misbehave at someone else’s house. For many that is a vision of a strong black community, in which children are so loved and cared for that everyone has a stake in making sure that those children turn out well, and “know how to act.” In other words, it is clear to me that Peterson views his willingness to engage in strong discipline as a mark of being a good father.

Perhaps it is time to acknowledge that the loving intent and sincerity behind these violent modes of discipline makes them no less violent, no more acceptable. Some of our ideas about discipline are unproductive, dangerous and wrong. It’s time we had courage to say that.

I am not interested in haggling any more with black people about the difference between spankings and abuse, because when emotions and stakes are both as high as they are, lines are far too easily crossed.

Stakes are high because parenting black children in a culture of white supremacy forces us to place too high a price on making sure our children are disciplined and well-behaved. I know that I personally place an extremely high value on children being respectful, well-behaved and submissive to authority figures. I’m fairly sure this isn’t a good thing.

If black folks are honest, many of us will admit to both internally and vocally balking at the very “free” ways that we have heard white children address their parents in public. Many a black person has seen a white child yelling at his or her parents, while the parents calmly respond, gently scold, ignore, attempt to soothe, or failing all else, look embarrassed.

I can never recount one time, ever seeing a black child yell at his or her mother in public. Never. It is almost unfathomable.

As a kid in the 1980s and 1990s I loved family sitcoms. "Full House," "Who’s the Boss?," "Growing Pains." You name it. But even before my own racial consciousness was fully formed, I remember knowing that I was watching white families very different from my own, in part, because of how children interacted with their families. Invariably on an episode, a child would get mad, yell at a parent, and then run up the stairs (white people’s sitcom houses always had stairs) and slam the door.

What I know for sure is that yelling, running away or slamming anything in the house that my single mama worked hard to pay for would be grounds for some serious disciplinary reprisal. Even now, when I think about what kind of behavior I would permit as a parent, I am clear that slamming doors in my home is unacceptable.

Still, I also know that my anger was not an emotion that found a free and healthy range of expression in my household. My mother is my own personal hero, but just as she did many things differently than her own mother did when it came to raising daughters, I know I will think very intentionally about making space for my children to experience a full range of emotions – anger included -- in the safety of home. They can’t slam the door, but they can close it.

As for Adrian Peterson, he will have to deal with the legal consequences of his actions. It has long been time for us to forgo violence as a disciplinary strategy. But as Charles Barkley notes, if we lock up Adrian Peterson, we could lock up every other black parent in the South for the same behavior. Instead, I hope Peterson is a cautionary tale, not about the state intruding on our “right” to discipline our children but rather a wakeup call about how much (fear of) state violence informs the way we discipline our children.

If the murder of Michael Brown has taught us nothing else, we should know by now that the U.S. nation-state often uses deadly violence both here and abroad as a primary mode of disciplining people with black and brown bodies. Darren Wilson used deadly force against Michael Brown as a mode of discipline (and a terroristic act) for Brown’s failure to comply with the request to walk on the sidewalk.

The loving intent and sincerity of our disciplinary strategies does not preclude them from being imbricated in these larger state-based ideas about how to compel black bodies to act in ways that are seen as non-menacing, unobtrusive and basically invisible. Many hope that by enacting these micro-level violences on black bodies, we can protect our children from macro and deadly forms of violence later.

Perhaps it is audacious of me to encourage black parents to focus less on producing well-behaved children in a world that clearly hates them. Black boys and girls are suspended or expelled from school more than all other demographics of boys and girls, often for similar behaviors, simply because their engagement in those behaviors is perceived as more aggressive.

White children in general are raised to be Columbus, to “discover” the world anew and then to manipulate and order the universe to their own liking. If we take away the colonizing impulse in living this way, I think it would be amazing to have the luxury of raising black children who also view the world as a space of their own making, a space to be explored, a space to build anew. A space where occasionally, simply because you live there, you can opt to walk in the middle of the street instead of being confined to the sidewalk, much as you might sling your leg across the arm of a chair in your own home, because it is home.

But for so many black children, these kinds of frivolous choices will get you killed or locked up. For black children, finding disciplinary methods that instill a healthy sense of fear in a world that is exceptionally violent toward them is a hard balance to find.

The thing is, though: Beating, whupping or spanking your children will not protect them from state violence.  It won’t keep them out of prison. Ruling homes and children with an iron fist will not restore the dignity and respect that the outside world fails to confer on adult black people.

What these actions might do is curtail creativity, inculcate a narrative about “acceptable” forms of violence enacted against black bodies, and breed fear and resentment between parents and children that far outlasts childhood.

Violence in any form is not love. Let us make sure first to learn that lesson. And then if we do nothing else, let us teach it to our children.