"This Is Where I Leave You": Terrific cast almost rescues turgid middlebrow crap

Tina Fey is wasted, but Jason Bateman, Adam Driver and Jane Fonda have strong moments in a formulaic family farce 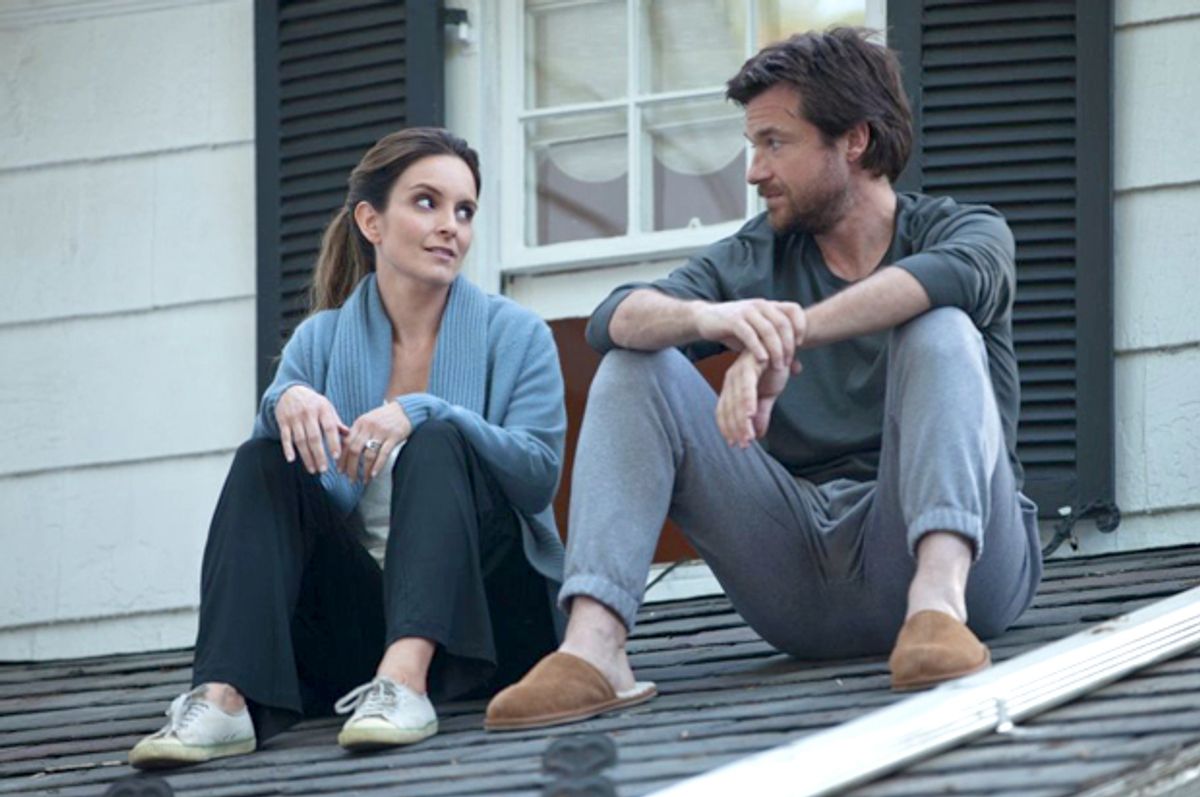 Tina Fey and Jason Bateman in "This Is Where I Leave You" (Warner Bros. Pictures)
--

A star-studded family dramedy crowded with comic actors being serious and serious actors being funny (or trying to), “This Is Where I Leave You” is a set of familiar gestures that’s utterly incapable of being surprising. But just because a movie is neither original nor memorable doesn’t mean it’s ineffective. I struggled, for as long as I could, against being drawn into the early-midlife crisis of Judd Altman (Jason Bateman), a likable, faintly narcissistic guy who has to face the implosion of his marriage and the death of his father at the same time. But Bateman’s always been an actor who can do a lot with a little, and he conveys the impression that this lost middle-class American’s entirely ordinary level of pain stands for something larger and more universal.

It doesn’t, of course. “This Is Where I Leave You,” which was directed by Hollywood veteran Shawn Levy (of “Date Night” and the “Night at the Museum” franchise), is frequently irritating and occasionally insulting. The repeated gags involving a precocious toddler and his potty chair, in particular, are like chewing sandpaper after the first iteration. It adds up to nothing in the end. Still, I’m forced to admit I kind of liked it, largely based on a cast that elevates supremely mediocre material to – well, what exactly? To haute-mediocrity? To adequate disposable entertainment? To a VOD selection you won’t bitterly regret three months from now? Something like that. If Tina Fey is almost entirely wasted in a humorless role as Judd’s unhappily married sister, other actors fare better. Adam Driver is almost puppyish as Judd’s irresponsible, philandering younger brother, who comes to the wedding with his older girlfriend cum therapist (the terrific Connie Britton), and Jane Fonda adds a note of queenly precision to what could have been a caricature role as the family’s fearsome mom, who has enormous new boobs and a secret she isn’t ready to share.

What you can say for Jonathan Tropper’s screenplay (based on his own bestselling novel) is that it doesn’t opt for the most blatantly obvious solution to Judd’s dilemma, which begins with the discovery that his wife, Quinn (Abigail Spencer), is spending her birthday in bed with his douchey radio-host boss (Dax Shepard) just as Judd is bringing the Martha Stewart-worthy birthday cake home. Tropper’s basic mode is that of warmed-over or dumbed-down Philip Roth, including the strong aftertaste of male fantasy with undertones of misogyny. It’s impossible not to root for Judd to divorce his wife’s “whore ass,” as he puts it in an angry outburst (which got a round of applause at the screening I attended), or to go after the cute skating instructor (Rose Byrne) who seems to have been waiting around in their hometown, pining for him, ever since high school.

But I’m skipping ahead, largely because I just don’t want to bother synopsizing a movie that’s been made at least 25 times before, with minor variations on the model. Now shaggy, unemployed and ensconced on a friend’s sofa, Judd gets the word that Dad has died and has to reconnect with his family, who barely seem to be on speaking terms. Oldest brother Paul (Corey Stoll) is married to Judd’s ex-girlfriend Alice (Kathryn Hahn), and they’re struggling to conceive a child, which leads to a supposedly hilarious baby-monitor mishap. Wendy (Fey) is married to some successful but evil businessman who barely has a speaking part, but she still has a major love-jones for the surfer dude across the street (Timothy Olyphant), who suffered a debilitating brain injury years ago. Yeah, it’s a family ensemble movie featuring a brain injury, along with an unexpected pregnancy, at least one infidelity and several near misses, and a major character who comes out at last. (I’m not telling!)

To continue the warmed-over Roth flavor, Hillary (Fonda), a therapist who supported dead Dad’s sporting-goods business by writing privacy-invading self-help books about her own family (I realize that doesn’t make much sense), insists that they all sit shiva, despite their purely notional and atheistic version of Judaism. Wendy, Fey’s character, observes at one point that Mom’s shiva chair is in the spot where they usually put the Christmas tree. There’s some hit-and-miss humor, charitably speaking, involving the young and supposedly hip local rabbi (Ben Schwartz), who aspires to a hip-hop DJ demeanor but is still known to the family as “Boner.” The three adult brothers sneak off and get stoned at temple during Dad’s memorial service, a scene that is apparently required in every movie ever made about a middle-class Jewish family.

Thing is, amid the pain of all this by-the-book comedy, everybody in the cast gets at least one good scene with Bateman, even Kathryn Hahn and Connie Britton, who both make bids to steal the movie in teeny-tiny roles. Britton’s character, a high-powered 40-ish therapist, knows she’s making a dreadful mistake in falling for feckless Phillip (Driver) but can’t help herself; it’s a dignified and complicated portrayal of human confusion. As for Driver, I know him mainly from his movie roles (since I basically can’t stand “Girls”), but his limber, thoughtless, idiotic and lovable character here is full of surprises. Fey’s lost and embittered wife is easily the worst-written character in the film, but she has nice chemistry with Bateman; indeed, Wendy’s only dramatic function is to make him face his flaws, begin to grow toward manhood and bag the hot skating instructor.

This is stating the obvious, and feigning surprise over something that isn’t surprising, but with this level of talent in the cast you ought to be able to make a really funny, crackling and heartbreaking family comedy, instead of an instantly forgettable Shawn Levy movie driven by middle-aged male self-pity and toddler-poop jokes. The fact that it could have been a lot worse, and that some really good actors manage to rescue a few moments from the retread formulaic glop, is not much of an endorsement. Compare a tame, treacly, least-common-denominator comedy like this one to almost any showrunner-driven cable series, and you understand why Hollywood has almost entirely lost the adult audience, and why its business model appears to be in terminal decline.