The iPhone 6's weird affair of the heart

What's the insane allure of lining up for a device? 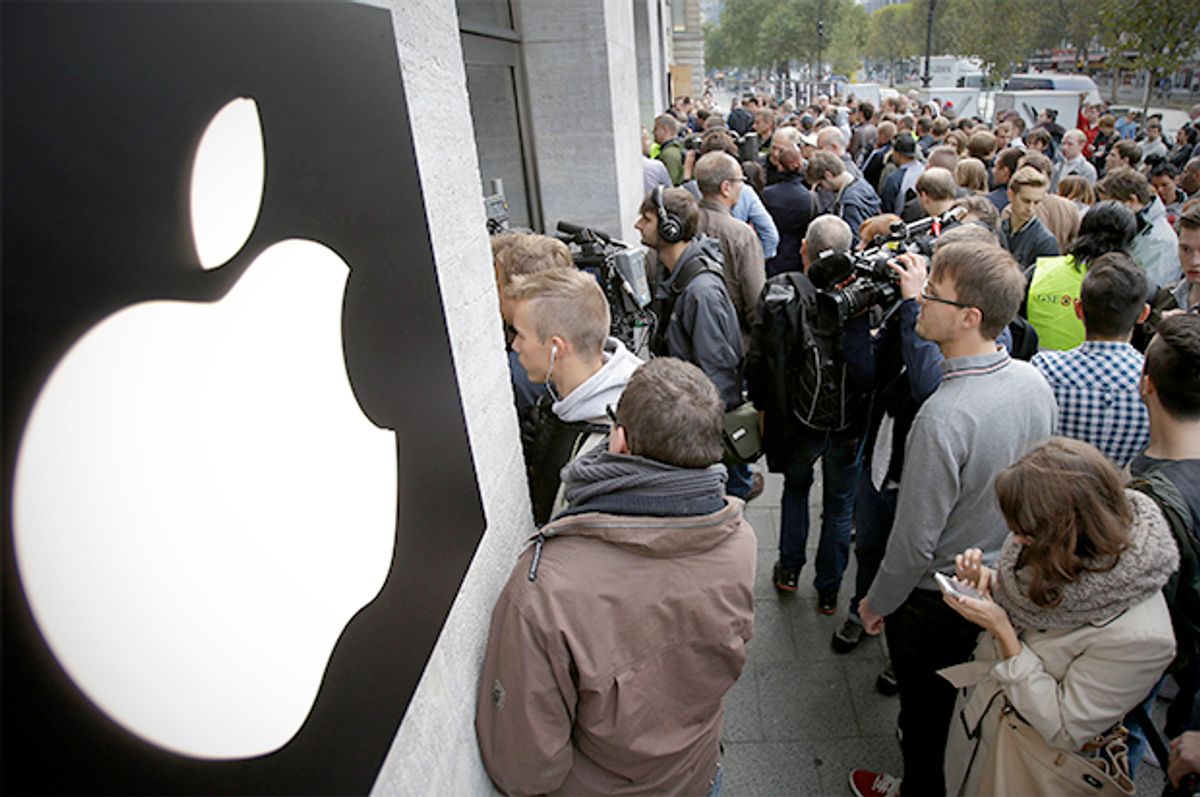 Everyone, remain calm. In a worldwide case of mass hysteria usually reserved for raptures and Michael Bay movies, the iPhone 6 went on sale Friday, setting off global reports of tragedy and devastation.

There was, for example, the "devastated" customer in Sydney who was dealt the "crushing blow" of being sent to the back of the line after waiting all night. Also in Australia, there was a similarly "devastated" young man who'd waited all night to be the first to purchase the new phone at Perth's Apple Store. But tragedy struck when he dropped it as he opened it for news reporters on live television. In New York, the lines at the Apple stores were already far into the hundreds by 8 a.m., and the line at the flagship store on Fifth Avenue Friday morning was extending well up into the Upper East Side. And, of course, because it's New York, some of those line-sitters have been professionals who've been hired to snag the magical devices – and many others are entrepreneur types who are planning on reselling them. Yet as Racked reports, "No matter that the phone's been available for preorder for days, or that you could take a train to a Westchester or Long Island mall today and walk out with a phone fairly easily — once you've waited outside the glass cube, you're in the club." And based on the crowds, it's a remarkably big club.

I confess that the idea of sleeping on a sidewalk to purchase anything has never appealed to me. If I didn't do it for Live Aid when I was teenager, I'm sure as hell not doing now it for something that's basically a device to ignore my family members. I likewise don't share the desire to spend Thanksgiving camping outside a Wal-Mart, waiting to stampede toward televisions. But at least I can almost understand Black Friday. I can get my head around the illusion of stalking a great bargain, the triumphant sensation that might come from a feeling of getting one over on The Man. I can't, after all, receive a compliment about any item of clothing I'm wearing without blurting how much I paid for it. My children think that "Nineteen dollars!" is an acceptable alternative way of saying "Thank you." But waiting for hours to pay full price for something? That doesn't even make sense.

Maybe my bafflement is just that I still feel remarkably satisfied with my old iPhone 4. That's right, I said 4. I can only fit, like, 400 songs on it. I don't even care, ha ha! It's like I forgot to need to buy something when what I have is still pleasing! Plus, my tiny lady hands and I are unsure about how we feel regarding a new device obviously designed by and for those possessing big burly man mitts. Because I'm a woman, my dainty fingers naturally recoil from the brutish design of the new iPhone – and my snugly fitting pants protest against the bulk as well. In Business Insider Wednesday, Jim Edwards reported, "I'm told that in one Apple Store right now, all customers are asking is, 'Will it fit in my pocket?'" My ovaries, meanwhile, render me incapable of the tenacity, determination and no doubt stealth peeing skill needed to pull off a wait of great duration to obtain one. In the Guardian Friday, Christopher Hooton brilliantly captioned a photograph of the massive throng outside the Apple store in Covent Garden, "There is literally not a single woman in this iPhone 6 queue." Sure, there are females queuing up elsewhere -- the top story in the Sydney Morning Herald Friday is about a girl brought to tears after being booted from the iPhone line. She called her experience "a waste of my heart, waste of my love." But as Hooton notes, the launch is really "a veritable sausage party."

Yet that brokenhearted Sydney girl knows what those lines Friday are about. They're a love story. A love story between masses of mostly guys and a phone. A phone that you can buy at the mall with little to no waiting. Today. Or order delivered to your house. But the heart wants what it wants, and it wants to suffer a little -- or to pay somebody else to suffer. It wants cold and sleep deprivation. It wants, for one day, an experience -- one that takes place in the real world, surrounded by other humans.