Once upon a time on the Bowery

Photos from the earliest days of CBGB take you up close to Patti Smith, Talking Heads, Blondie and a loud new scene 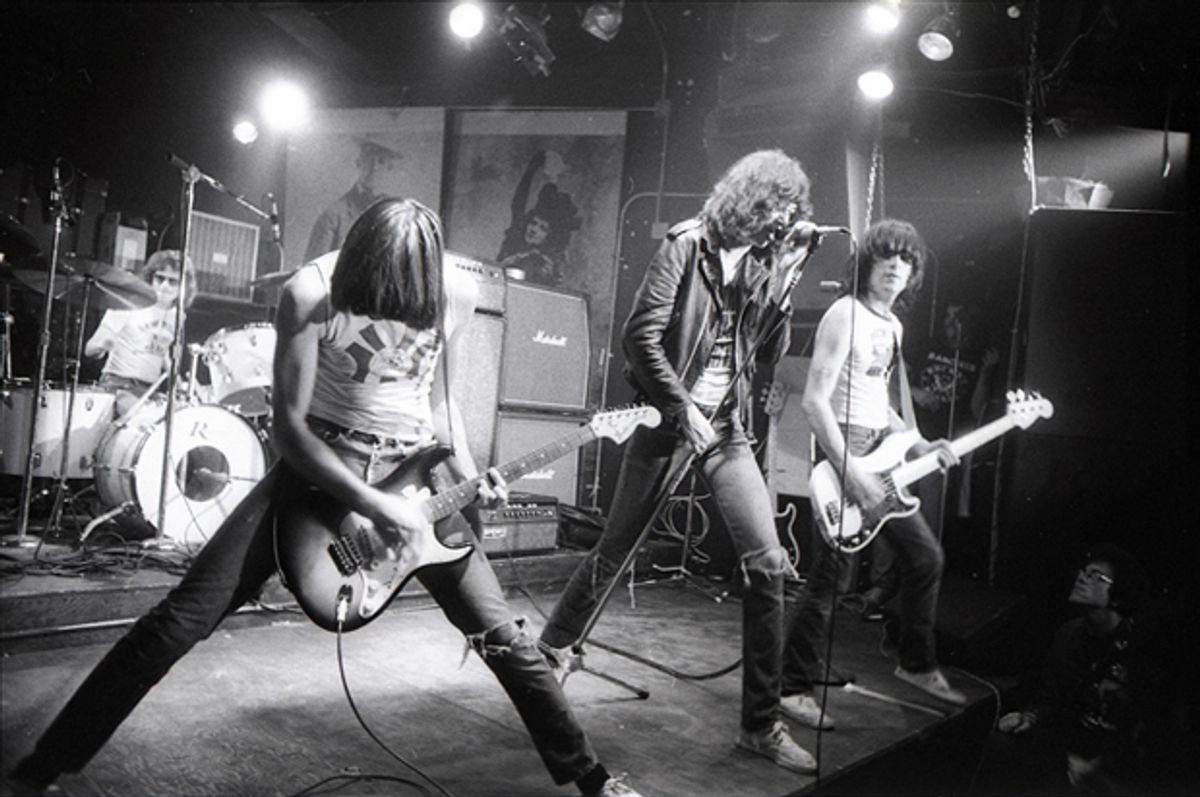 When I moved to New York in 1976 to work as a photographer’s assistant, I quickly began looking for a place to hang out in and hear live music. I’d seen the ads in the back of the Village Voice — where the bands had odd interesting names like Blondie, Richard Hell and the Voidoids, and Suicide — and headed down to the Bowery to see what was going on at this place CBGB’s (nobody called it CBGB). I remember standing out on the Bowery — this club in the middle of nowhere — then walking under the awning and paying my $2 to the cute girl at the front desk. The first band I saw was Television. and I could tell from their sound that they must be Velvet Underground fans — interesting. Then after they went off, I heard the juke box, saw the pinball machine, got a cheap beer and stuck around for 3 years.

When I initially went to CBGB’s, it wasn’t with the intention of taking photographs. I was just looking to hear some good music. But after hanging out there for a few days, I started to think that this would be a very cool place to try something I’d already been thinking about — photographing by available light at night. So I took my Leica camera, and pushed the Tri-X film like crazy, until I could take pictures of people lit up by the street lights on the Bowery. Not just the people in bands, but everyone - artists, filmmakers, waitresses, bartenders, managers, friends.

I was going to document this scene like Brassai documented Paris in the 1930s. Talking Heads, 1977
This was their first weekend as a foursome at CBGB’s, after adding Jerry Harrison, before they started recording the LP "Talking Heads: 77." Patti Smith, Bowery 1976
Patti lit up by the Bowery streetlights. I tapped her on the shoulder, asked if I could do a picture, took two shots and everyone went back to what they were doing. 1/4 second at f/5.6 no tripod. Blondie, 1977
This was taken at the Punk Magazine Benefit show. According to Chris Stein (seated, on slide guitar), they were playing “Little Red Rooster.” Bathroom, 1977
This photograph of mine was used to create the “replica” CBGB's bathroom in the Punk Couture show last summer at the Metropolitan Museum of Art. So I got into the Met with a bathroom photo. Ramones, 1977
“The kids are all hopped up and ready to go...” view from the unique "side stage" at CBGB's that you had to walk past to get to the basement bathrooms. Hilly Kristal, Bowery 1977
When I used to show people this picture of owner Hilly Kristal, they would ask me “Why did you photograph that guy? He’s not a punk!” Now they know why. None of these pictures would have existed without Hilly Kristal. Dictators, Bowery 1976
Handsome Dick Manitoba of the Dictators with his girlfriend Jody. I took this shot as a thank you for him returning the wallet I’d lost the night before at CBGB's. He doesn’t like that I tell people he returned it with everything in it. Alex Chilton, Bowery 1977
We were on the median strip on the Bowery shooting what became a 45 single sleeve for Alex’s "Bangkok." A drop of rain landed on the camera lens by accident. Definitely a lucky night! Ramones, 1977 - never before printed
I loved shooting The Ramones. They would play 2 sets a night, four nights a week at CBGB's, and I’d be there for all of them. This shot is notable for Johnny playing a Strat, rather than his usual Mosrite. Maybe he’d just broken a string. Love that hair. Richard Hell, Bowery 1977 - never before printed
Richard exiting CBGB's with his guitar at 4am, about to step into a Bowery rainstorm. I’ve always printed the shots of him in the rain, but this one is a real standout to me now. Patti Smith + Ronnie Spector, 1979
May 24th - Bob Dylan Birthday show - Patti “invited” everyone at that night’s Palladium show on 14th Street down to CBGB's to celebrate Bob Dylan’s birthday. Here, Patti and Ronnie are doing “Be My Baby.” Legs McNeil, 1977
Legs, ready for his close-up, near the front door of CBGB's. Suicide, 1977
Rev and Alan Vega - I thought Alan was going to hit me with that chain. This was the Punk Magazine Benefit show. Ian Hunter and Fans, outside bathroom
I always think of “All the Young Dudes” when I look at this shot. These fans had caught Ian Hunter in the CBGB's basement outside the bathrooms, and I just stepped in to record the moment. Tommy Ramone, 1977
Only at CBGB's could I have gotten this shot of Tommy Ramone seen through Johnny Ramones legs. David Godlis is a photographer who lives, works, and sometimes sleeps in New York City. His CBGB Punk Book is available thru Kickstarter. You can find more info at GODLIS.com or instagram @godlis.