In this no-budget satire, an aspiring NYC photographer "discovers" the teen rappers behind "I'll Cut Yo Dick Off" 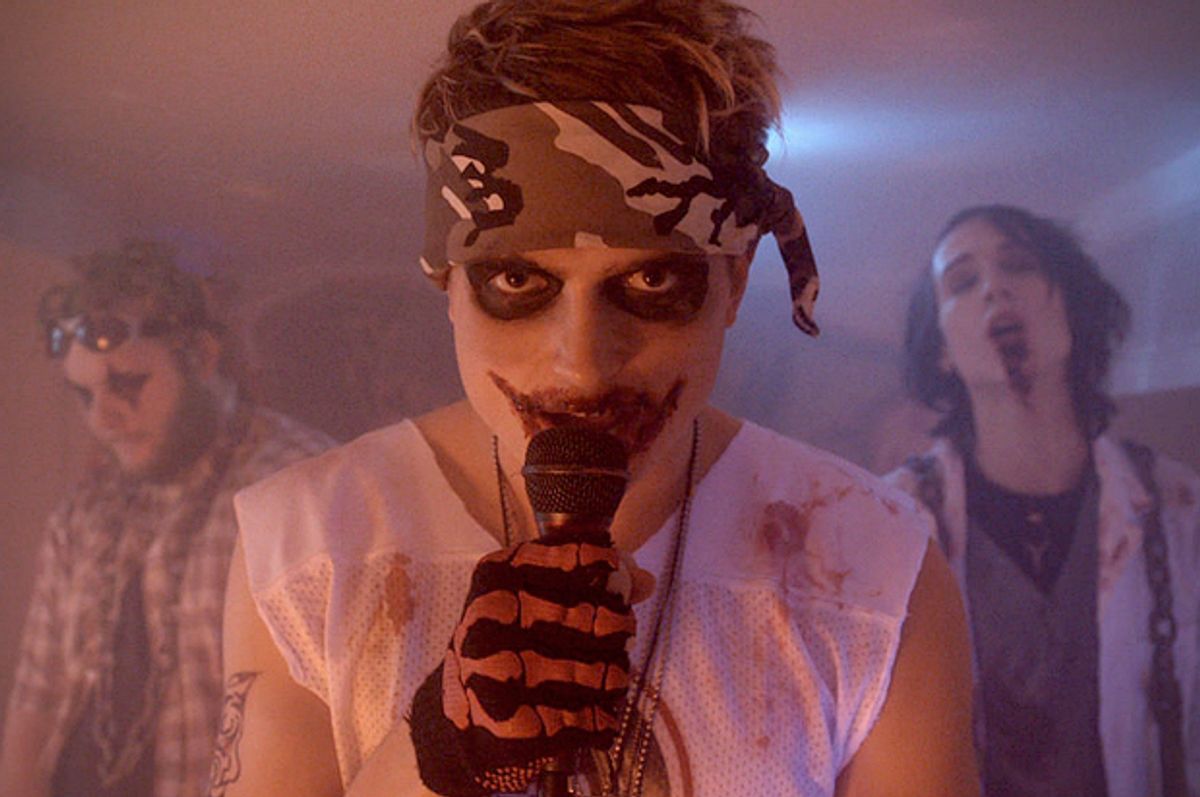 If it were literally possible to make a film with shoestrings, then Michael M. Bilandic’s “Hellaware,” a trippy, occasionally hilarious and oddly poignant Americana odyssey, might be that film. A former employee of Kim’s Video, the late, lamented emporium of offbeat cinema in New York’s East Village, Bilandic has made exactly the kind of movie the Kim’s crowd would cherish: ultra-cheap yet self-aware, both satirical and earnest, with a sting in its tail. You could even say that “Hellaware” has grand ambitions, of a certain tongue-in-cheek sort: This fable of NYC hipsters and exurban juggalos captures a fundamental split in American culture, with equal-opportunity ridicule.

Despite the general vibe that “Hellaware” was shot in a few days on borrowed locations with no props (all of which is presumably correct), it features witty and unhurried performances from Keith Poulson and Sophia Takal, two young veterans of the New York indie-film scene. Poulson plays Nate, an unemployed aspiring photographer who seems a little too easygoing and kind for the predatory and pretentious Manhattan-Brooklyn art world. His girlfriend has dumped him for a man with pigtails, who used to be a professional skateboarder and now sells primitive crayon drawings that look like the work of a disturbed but not especially talented 11-year-old. I’m not going to claim these early scenes are perfectly executed, but the concept is delicious; anyway, if you’re not going to grade “Hellaware” on the appropriate curve, there’s no point bothering with it in the first place.

Nate drowns his sorrows in a long night of booze, coke and cultural speculation with his friends Bernadette (Takal) and Gauguin (Duane C. Wallace), who may or may not be a couple. Bilandic captures the strange muzziness of relationships among mid-20s artistic types, where it seems fundamentally unclear who is with whom or what that even means, with asperity. Nate understands that, in theory, he needs to become ballsier and more ruthless to become a successful artist, and do something that feels ethnographic, anthropological, confrontational or voyeuristic, preferably all at once. So it is that he comes across the Young Torture Killaz, a hopelessly terrible rock-rap group from rural Delaware whose one and only video, for the inspiring anthem “I’ll Cut Yo Dick Off,” has become a minor Internet sensation.

It’s kind of wonderful, if not actually surprising, that this video – only snippets of which are seen in the film – became a huge YouTube hit in real life more than a year ago, when it was widely viewed and widely mocked by people who presumably did not realize that the band was fictional and their brand of ultra-violent darkness was intentionally moronic. One could ask why that’s even an important distinction, I guess. Somebody wrote that song and recorded that video because they thought it was funny and cool. How many theoretical hoops they had to jump through to get there is kind of irrelevant, isn’t it? You could say that “Hellaware” poses the question of how to tell the difference between pigtail-wearing hipster artists from Williamsburg and drugged-out Goth-juggalo teenagers from Delaware. Is one group really more self-conscious, more “performative” and more culturally aware than the other?

Anyway, Nate and Bernadette hit the road to see a “concert” by Young Torture Killaz in person, and if there’s even a 1 percent chance you’re going to check this out, I shouldn’t spoil the delirious delights of that evening, which hints at horror movie or violent thriller without ever exactly turning into one. As part of his new obnoxious-artist persona, Nate makes all kinds of promises to the Killaz he has no intention of keeping (although, in fairness, he does make a good-faith effort to acquire the legendary hip-hop narcotic beverage known as “purple drank”). “Hellaware” runs barely 70 minutes, and among the numerous areas I wish Bilandic could have developed further, the actual characters of the dissolute Delaware teens rank high on the list. Still, it comes as a surprise to Nate to learn that Killaz rapper and lyricist Rusty (Brent Butler) is a real person with a job and a parole officer, who might not want pictures of himself smoking dope, vomiting and passing out stuck to a wall for the delectation of bearded gawkers in Bushwick.

If Nate strikes the art world’s version of a Faustian bargain, his Mephistopheles is a famous gallery owner and outsider-art aficionado called Olivier LaFleur (Gilles Decamps), who loves the Larry Clark-style photographs of the Killaz but seems disappointed that Nate is not personally an ex-convict, a drug dealer or a sexual predator. Olivier assures Nate that only the work matters, and he doesn’t want to hear any bogus bourgeois concerns about human relationships or responsibility – and in a total ass-backward fashion, he turns out to be right. There are hints of “Taxi Driver” and “The Wicker Man” to the final switchback, but the ending of “Hellaware” feels even less developed than the rest of the film. There’s a stringent, pure poverty to this movie that forms a large part of its appeal and also illustrates its theme. I hope Bilandic gets more money the next time around, but I also hope he never winds up with too much of it.

“Hellaware” opens this week at Cinema Village in New York, with other cities to follow. It’s also available on-demand from Amazon, Google Play, iTunes, Vudu, YouTube Movies and other sources.