Many more people are killed by cars than bikes, so why are cyclists treated like enemies of the state? 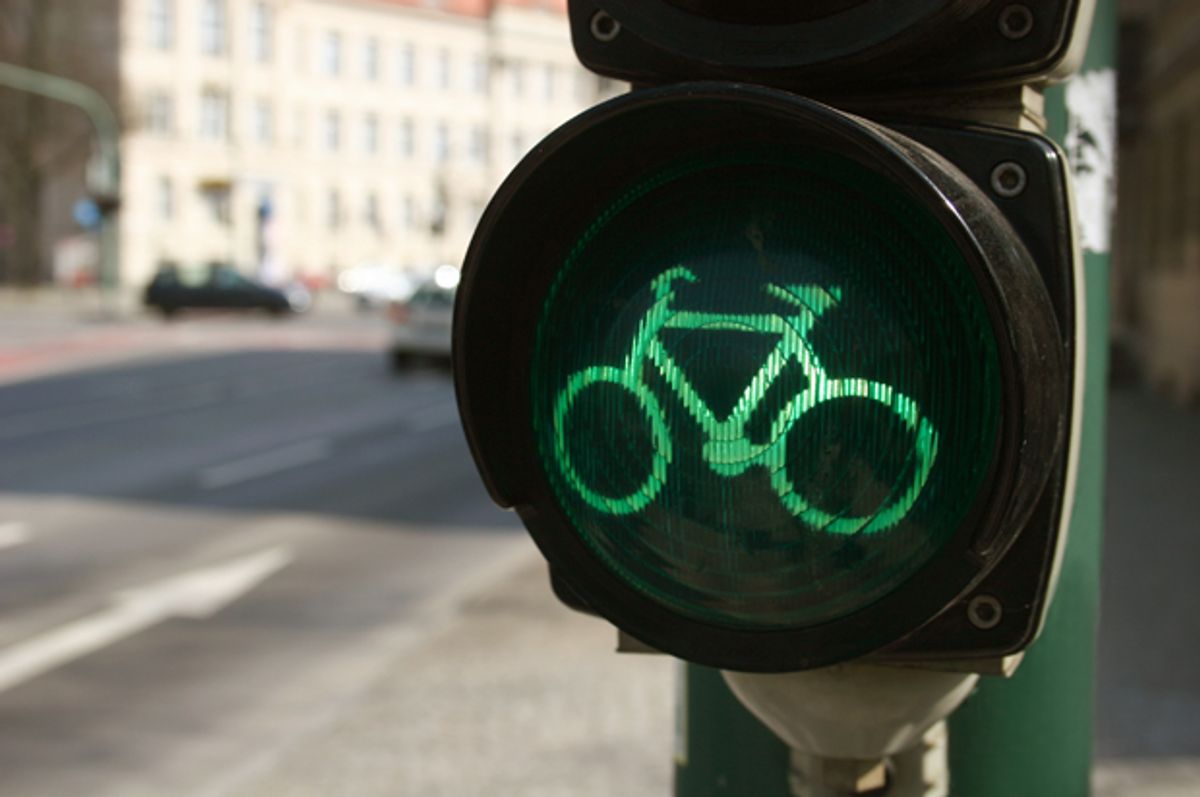 Here are the facts: A woman was hit by a man on a racing bike in New York’s Central Park last Thursday, and died from her injuries on Monday. Swerving to avoid a group of pedestrians on the park’s crowded road loop, the cyclist had crashed into the victim, a mother of two from Connecticut. He waited at the scene for the police. It was the second time in two months a pedestrian has been killed by a cyclist in New York City, and both incidents took place in Central Park.

The death of Jill Tarlov was a tragedy; the circumstances and the contours of fault, blame and criminality have been sketched out elsewhere, so I won’t do the same here.

The public debate, however, has predictably evolved into something more expansive. It has prompted New York City’s semi-annual referendum on Bike Culture, an event so fraught with threats and hyperbole they ought to sell tickets.

Fortunately, it’s free – so grab some popcorn and start your browsers.

If you want to understand the friction that cyclists cause in the nation’s densest and least car-dependent city, this nebulous phrase, “Bike Culture,” is a good place to start. Many bike riders would have trouble defining it. Yet, like all such designations, it’s a useful term for outsiders. Once we establish that there is such a thing as Bike Culture, we can diagnose its problems and hold it accountable when something goes wrong.

Those who generally have a low opinion of the city’s bike-riding population, especially the New York Post, have viewed the Central Park collision as a moral tale about cyclists at large. Andrea Peyser, a columnist from the depraved tabloid, calls bikers “terrorists on wheels,” putting her in fierce competition with Washington Post writer Courtland Milloy for the annual Bikelash Awards. From the New Yorker to the New York Statehouse, people on bicycles have been denounced as reckless and self-righteous scofflaws.

It feels pointless, as a bicycle rider, to rebut these pieces, because each one is the same as the last. (Adam Sternbergh’s 2011 guide to the form is evergreen.) Suffice it to say that a number of bike riders feel the vitriol is disproportionate. Deaths caused by bicycles are exceedingly rare. Between 1996 and 2005, 11 New York City pedestrians were killed by cyclists. During the same period, 225 cyclists and 1,944 pedestrians were killed by cars. And in the last nine years, six New Yorkers have been killed by bicycles. But a New York City pedestrian is killed by a car every 30 hours.

Those numbers don’t excuse dangerous, aggressive or disrespectful bike riding. (On the contrary, they serve as a reminder that we — despite our own vulnerability amid buses, trucks and cars — can also cause harm.) But they do raise a question bicycle riders ought to confront: Why, when cars are hundreds of times more dangerous, have bicycles become the de facto urban menace?

Why does state Sen. Diane Savino feel it’s acceptable to yell at cyclists out her car window: “Find a fucking bike lane and get in it!”? (Especially when her borough, Staten Island, has only six bike lanes.)

What, in short, is Bike Culture – and how can we fix it? What unites lycra-clad racers, tykes on trikes, immigrant deliverymen, moms with Dutch step-throughs, dads with baby seats, fixie kids, Citibike bros, and the regular Joes and Janes commuting up Second Avenue with their right pant legs tucked into their socks?

More than anything, I’d argue, this disparate group is defined by what it lacks: proper infrastructure. To ride a bicycle in New York, as in so many other American cities, is to be in a constant state of mental agitation, primed to adapt to dangerous, unfriendly and inscrutable road conditions. Bike Culture has no shape of its own. Its contours are imposed from without, like hot metal filling a mold.

New York drivers tend to believe they have spent the last decade making concessions, and now expect cyclists to adhere to a code of conduct as regimented and rule-bound as their own. But that’s not yet possible. There is no network of bike lanes or paths that mirrors, in the most remote sense, the automobile or pedestrian street grid. Urban cyclists routinely find themselves at junctures that planners simply haven’t foreseen, where no one seems sure of what’s expected.

Those routes that do exist may be full of people waiting to cross the street (1st Avenue), or plowed snow (Bleecker Street). They may be in the reach of car doors liable to open at any second, or cut through every two blocks by cars turning left (Sixth Avenue). They may switch, at an intersection, from the right side of a busy street to the left — as the bike lane on Lafayette Avenue in Brooklyn does.

Every time a taxi, delivery truck or police car parks in the bike lane, that whole, controversial piece of infrastructure becomes worse than useless. Because cyclists must then join the rapid flow of traffic, a blocked bike lane is more dangerous to cyclists (and more bothersome to motorists) than having no bike lane at all.

I can see how the culture of riding a bicycle in New York might seem, to motorists and pedestrians, like a strategy devised at the offices of the Bike Lobby. But if there’s any appearance of unity about it, it’s because all cyclists are reacting to the same challenge: how to navigate, on a 20-pound bicycle going 10 miles per hour, an environment designed for and occupied by 2,500-pound automobiles going 30 miles per hour. That sometimes means breaking automobile traffic laws. When it does, cyclists (of course) have a responsibility to make sure they don’t put pedestrians at risk.

Bike Culture, such as it exists, is a highly malleable and responsive thing. Fixing the city’s transportation network will fix the way cyclists use it.