The American family is a myth: Why our national moral panic must stop

As a kid, I thought I'd be married with three kids by now. But now I see "family" as something totally different 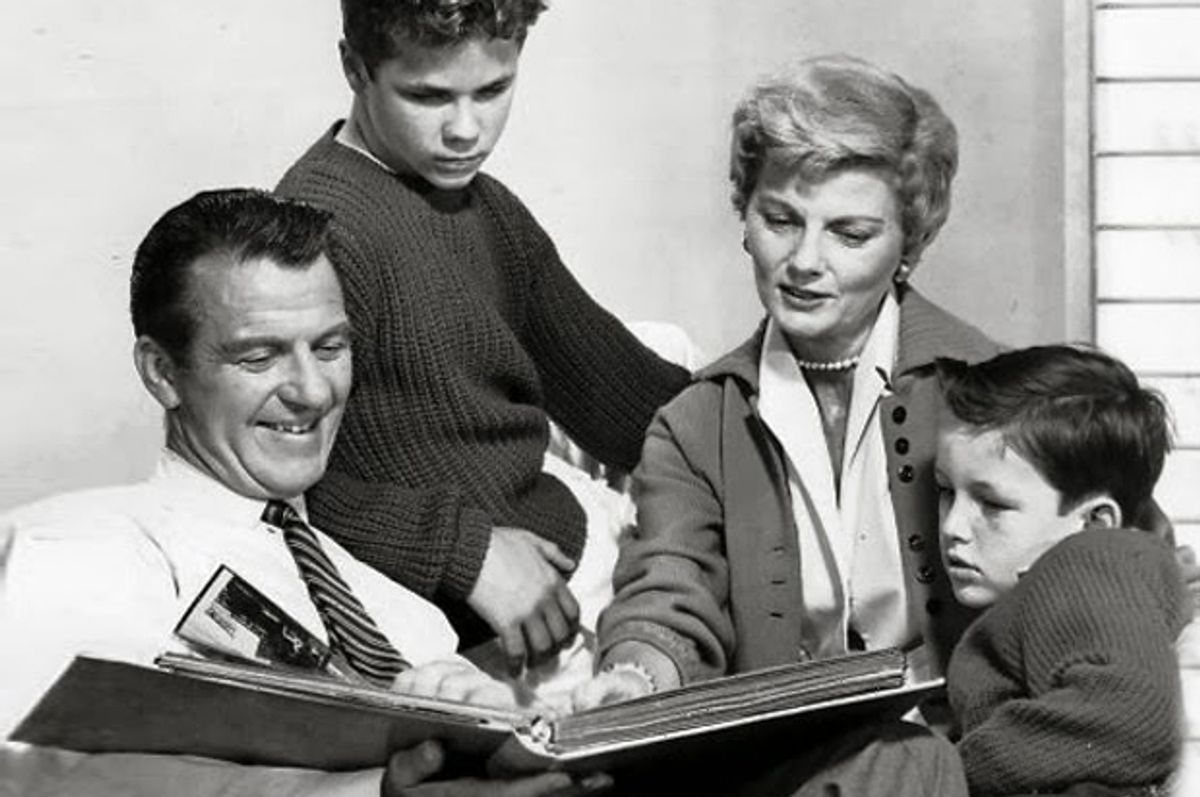 In about two months, I turn 34. The other day I remembered that I was supposed to be on baby No. 3 by now. My 22-year-old self thought 24 was a great age to meet a partner, date for two years, get married at 26, play for two more years, have a first baby at 28, a second at 31, and a third at 34, a boy first, and then two girls, spaced evenly apart. I think of this, of how absurd it feels as I sit at a computer in an empty home, with far simpler goals – going on more dates in my 30s than I did in my 20s, for instance. Every other day I shift from wondering whether I even really like children to having my ovaries scream as I see yet another precious baby born to a Facebook friend.

For now, my mother has started borrowing other people’s grandchildren. She shares them with her friends.

In the midst of this, I find myself frowning at a recent New York Times story that declares that marriage is disappearing. More than 40 percent of new mothers are unmarried.  And the rate of white single-parent households now equals the rate of black single-parent households in 1965 when Daniel Patrick Moynihan issued an infamous report declaring black communities to be caught in “a tangle of pathology.” To solve the problem of emasculated men and domineering women, he proposed creating pipelines for African-American men to get good jobs, in order to assume their rightful place at the head of black families.

Isabel Sawhill, echoing Moynihan, writes, “The decline in marriage and the growth of childbearing outside of marriage is partly a result of the limited economic prospects of those at the bottom. We should provide more education and job opportunities for unskilled men in particular, but the evidence that these policies will restore stable families is sketchy.”

She tries to steer a middle ground between a liberal agenda that proposes new ways for governments to support families – for instance, the paid maternity leave the Obama administration now supports -- and a conservative agenda that sees the decline of marriage as a cultural and moral problem. Frankly, I find these episodic moral panics, even the ones that appear in Sawhill’s subdued and pragmatic tones, to be tiresome, repetitive and lacking in creativity.

We don’t need more rules to police parents of unconventional families. We need better options for what families can look like in the first place.

I’m reminded of a conversation that I had with my dissertation adviser more than a decade ago, wherein he told me, “As black America goes so goes America. The things we experience always happen about 50 years before America experiences them. Marriage rates will continue to go down, not up,” he told me. To my more conservative 20-something self, it was remarkable that he leveled these charges as mere observation rather than indictment.

He was right, it seems. And what 50 years ago we understood to be a pathology in black families, is now framed as an invitation to rethink our ethics around parenting and families.

Still, irresponsible parenting is not the problem. Sawhill’s call for more “responsibility” doesn’t take into account the extensive ways that our societal structure only rewards one type of family configuration - - heteronormative, middle class, property-owning and generally white.

In the fourth grade or so, we received an in-class assignment to make a family tree. It began with our immediate family -- mother, father, brothers and sisters. I took the worksheet and could only fill out two names, mine and my mother’s. I hated the worksheet because I learned then that my grandmother, aunts, uncles and beloved cousins, who were more like big brothers, were not considered “immediate family,” though they were the family that I ate Sunday meals with, spent holidays with and loved. I was ashamed and embarrassed that my worksheet looked so bare, compared to those of my mostly white classmates.  I didn’t tell my mother about the worksheet, but I remember a few years later that she mentioned in passing a conflict at work, something about her co-workers with larger families. In telling me the story, in which apparently our family structure had been called into question, my mother simply looked at me and remarked: “You and me – we are a family.”

I grew up under the specter of Moynihan and his figurations of black pathology. Born to a single teen mom, I made it my entire goal up until age 18 to make it to college without becoming a teen mother. Then my goal was to graduate college, without becoming a mother or before I could financially support my offspring. Like my Crunk Feminist Collective colleague Robin Boylorn writes, “For most of my life not getting pregnant has been a tremendous accomplishment.  The hallmark of my success as a girl, and my mother’s greatest accomplishment as a parent, was getting me through school without having a baby.” For this working-class black girl, that desire “not to be a statistic” and not to struggle like my mom struggled, that desire not to “get on welfare,” made me an unrepentant good girl in the worst of ways, uncomfortable with my own sexual and romantic desires and unwilling to explore them.

I cloaked my middle-class aspirations and the respectability policing that come with them in the language of evangelical Christian purity, hoping that in following all the rules, God would grant me not only multiple degrees and career success, but eventually a wonderful man and a couple of kids.

I wonder what I might have done differently, but I also wonder if working-class black girls who aspire to middle-class stability have many other options outside of near perfection.  Working-class folks know that Americans have serious disdain for poor mothers. We don’t really believe poor people should have the right to have children and we certainly don’t believe poor folks need to have the sexual pleasures that come along with making them. Even though Sawhill attempts to make allowances for planning a working-class family, for most people planning a family means that you wait until you are solidly middle class in order to have one. What I knew as a working-class black girl was that routine sexual exploration could have derailed all of these goals.

But having spent most of my young adult life trying to make it into the middle class, which also meant making sure I didn’t have a baby, now I’m supposed to spend the remainder of my young adulthood trying to figure out how to have one. Perhaps I planned too well.

For black women, there are no guarantees that after putting your career first, partners will automatically come later. Most professional women who want to marry do marry, no matter the race, but we also tend to partner past prime child-bearing age. So I find myself at times “waiting to exhale,” knowing that the next three or four years will make a big difference in how my family life will look long-term.

It seems to me that the decline of marriage means not that we need to parent more responsibly but rather that we should build families more creatively.

If I don’t have children or I don’t ever partner long-term, am I destined to be a woman without a family? What does it mean that I might need a “Golden Girls”-type arrangement with my homegirls by age 45?

And what do we – professional, overachieving chicks – do with the sense of failure? On most days, being a feminist both helps and affirms the rightness of my quest to think more expansively about what it means to build community and family.

But there is often still that gnawing, nagging feeling that if I just hold on a bit longer, the (beautiful) man will come, and the baby – just one, no more than two – might come, too. How to hold a desire for this version of a life and a fierce and intense commitment to my life of independence and scholarly solitude is not something I’ve figured out.

Culturally, marriage has become the most readily accessible, mass-marketed Tupperware container in which we hold and transport notions of love, family and aspiration. Those of us reaching for other kinds of containers often come up short.

What increasing rates of divorce and increasing choices to not marry tell us is that microwaveable marriages no longer feel automatically healthy or worth it. Folks want real substantive, sustainable and creative relationships.

Last week, I explored with my feminist theory students what polyamorous relationships might look like, what it might mean to consider that we can’t get all we need from one person. They – young feminists – only balked, the incredulity palpable, their eyes trained on me as if attempting to stab me, killer of their dreams.

Though I am not “poly” as some of my folks might say, I do take some pages from the playbook of poly folks, queer folks and black folks, namely that I think very expansively about chosen family and kinship networks. The challenge is that even though we toss around terms like chosen family, we still don’t feel ultimate responsibility to each other. Unlike marriages or formal partnerships, where couples make housing, living and financial decisions together, we still have not created societal structures and language around helping groups of friends who have opted to become chosen family to do the same.

Do I freeze my eggs or don’t I? Do I move closer to my friends or don’t I? Do I hit up that old, kinda all right bf and ask for a sperm donation or don’t I? Do I want kids ever? When I do want them will I be able to have them? Do I want a husband? Does he have to live with me?  These questions all swirl in the back of my mind as I grind through an academic and activist life, trying to create economic possibilities for myself that were a dream for my mother and wholly out of reach for my grandmother.

On those days when the family I planned so hard to have seems wholly out of reach for me, when for yet another year I must mark a tax form, “family of one,” I choose to remember my mama’s moxie: “You and me – we are a family.”