A cheating husband, a dangerous woman and a crime that may or may not have happened -- in a canny French thriller 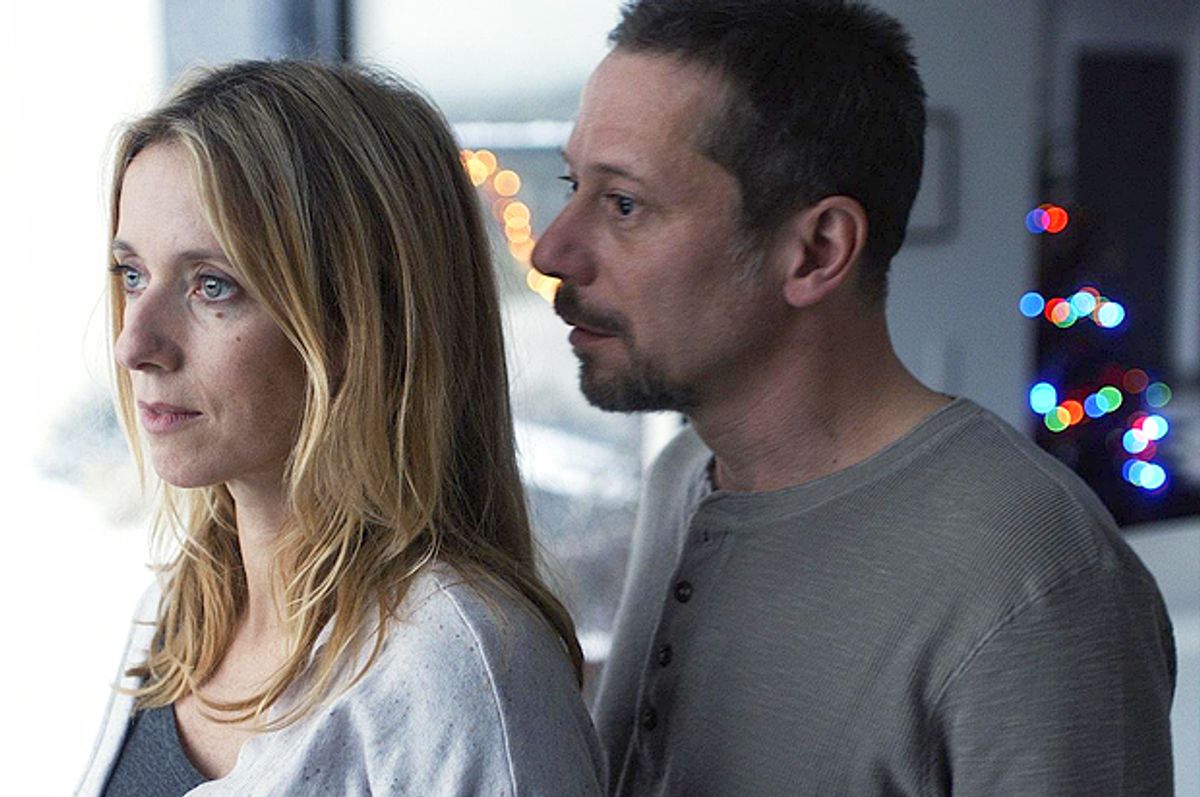 Léa Drucker and Mathieu Amalric in "The Blue Room."
--

A compact and resonant psychological thriller directed by French actor Mathieu Amalric, who is also its star, “The Blue Room” makes a fascinating European companion piece to David Fincher’s “Gone Girl.” (Amalric is a major star in France, but American viewers may know him best as the villain in “Quantum of Solace” or for his recent supporting role in “The Grand Budapest Hotel.”) I suppose it’s just coincidence that both movies are premiering at the New York Film Festival and then opening in theaters right away, but it feels like fate. In relative terms, almost nobody will see Amalric’s movie, and that’s too bad: Like “Gone Girl” it’s a study of a middle-class marriage in terminal decay that contains both a dreamlike, symbolic level and also a more conventional murder mystery, built around the archetype of the “dangerous woman.” But this film hews an entirely different path to reach essentially the same destination.

You could even say that “The Blue Room” derives from a similar literary source, a genre-based bestseller poised between pulp and literary fiction. In this case that source lies deep in the past, an early '60s novel by legendary crime writer Georges Simenon, primarily famous in its time for its unusually explicit sex scenes. (Those were the days when “French novel” really meant something!) Amalric co-wrote this contemporary adaptation with Stéphanie Cléau, and the two of them make a potent odd couple as Julien and Esther, adulterous lovers whose illicit affair unleashes a chain of disastrous consequences. At first “The Blue Room” unfolds in a series of intimate close-ups, all set within a world that seems faintly unreal, as if jointly constructed by Freud and Kafka. We move back and forth between the couple’s intense and sometimes violent lovemaking – always in the same “blue room,” in the same hotel -- and Julien’s interrogation by cops, shrinks and judges, some time later. But why are these officials so interested in the details of an extramarital fling between a provincial tractor salesman and a small-town pharmacist?

If Fincher’s “Gone Girl” is a farcical and satirical social portrait spread across two and a half hours, “The Blue Room” feels suspended in space and time, a canny, spiny miniature confined to 75 minutes. We understand from the cars and the cell phones that it’s the 21st century, but Julien and Esther appear to live in an archetypal French country town, virtually unchanged since Simenon’s day. We see brief snippets of ordinary life – Julien owns a John Deere dealership, probably a first appearance for that product placement in French cinema – just enough to make clear that the couple’s torrid love affair marks a significant rupture in that reality.

Are the affair and its nightmarish consequences real events, or figments of Julien’s disordered imagination and guilty conscience? (As Julien confesses, although he’s known the tall and striking Esther since their school days, he always assumed she was out of his league.) Ultimately that question gets a more or less satisfactory answer, but Amalric’s direction is at its most interesting when we’re not sure about that, and about lots of other things. We don’t know whether Julien’s stressed-out wife, Delphine (Léa Drucker), knows or suspects her husband’s infidelity, and we don’t know whether the cryptic notes Esther delivers to Julien, after he breaks it off with her and tries to patch things up with Delphine, are signs of criminal psychosis or just lovelorn hopefulness. (Does a card simply reading "À toi!" ("Your turn!") mean "time to get divorced" or something more sinister?) One big difference from “Gone Girl” is that there’s no Big Reveal, in which all the suspicious circumstances are explained and we know who is guilty, and of what. Julien himself is not entirely sure what has happened, and how much he is to blame.

Amalric and cinematographer Christophe Beaucarne structure much of “The Blue Room” around Julien’s bewildered and increasingly disheveled face, as he tries (and fails) to understand the people around him. He barely listens when Esther asks him a fateful question early in the film, he carries an innocent game with Delphine much too far during a beach vacation, and he repeatedly lies to the investigating magistrate (Laurent Poitrenaux) when he gains nothing by it and is sure to be exposed. In both “The Blue Room” and “Gone Girl,” the real mystery is not a whodunit but the unplumbed narcissistic and masochistic depths of the male ego. Julien and Nick Dunne, the Ben Affleck character in “Gone Girl,” could both be described as unfaithful husbands who inflict elaborate punishment on themselves for their real misdeeds, and who create or empower the female monsters they think they deserve. As Julien mumbles to the judge at one point, he had no plan, no malice aforethought and no clear idea of how his erotic adventure was going to play out. Isn’t that always the way it is, with guys?

"The Blue Room" opens this week in New York and Los Angeles, with more cities and home video to follow.