Talking reunions and nostalgia with Polaris, the now-reunited house band from the beloved '90s Nickelodeon show 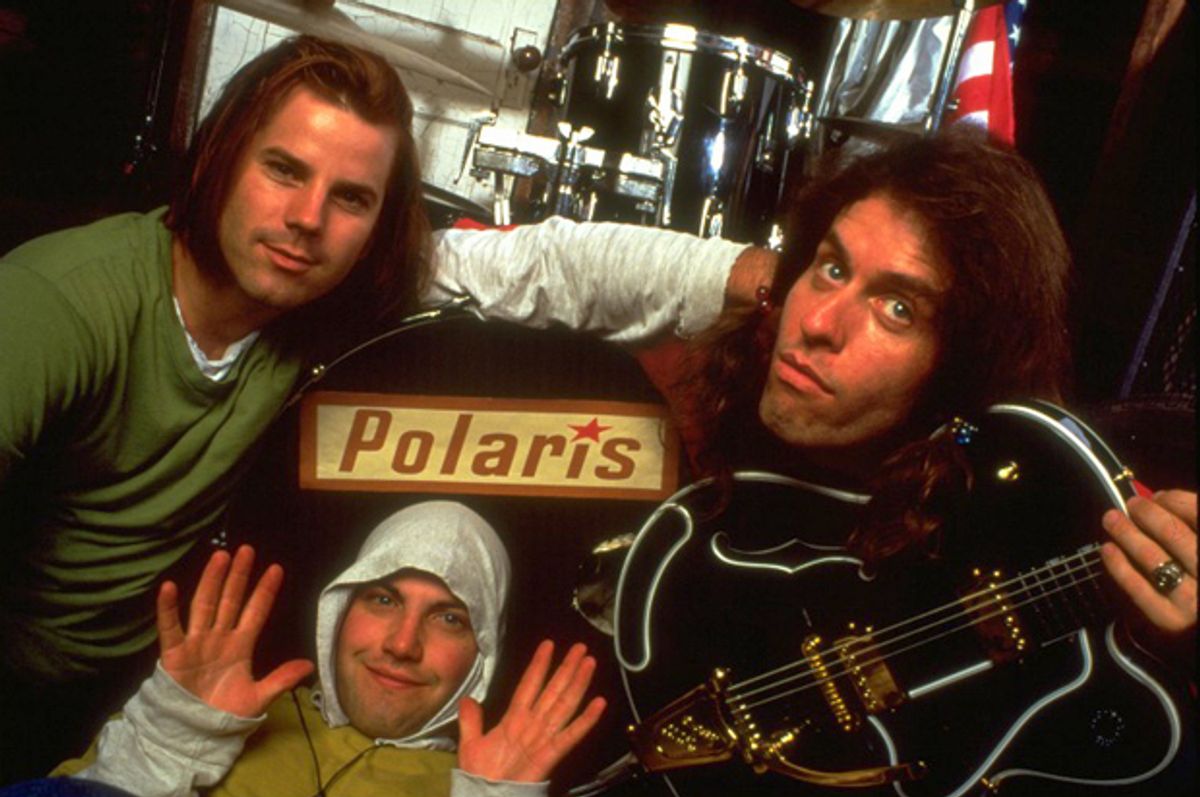 Polaris became a band by accident, and achieved cult status on TV.

The group was the house band for “The Adventures of Pete & Pete,” a children’s TV show that ran on Nickelodeon for three seasons from 1993-96. Polaris contributed “Hey Sandy,” which they performed in the show’s opening credits, and the band appeared in one episode. Now, 18 years after the series went off the air, and 15 years after Polaris released its sole album, the band has booked its first-ever tour, a nine-date trek that starts Oct. 4 in Providence, Rhode Island. The tour follows the band’s debut performance two years ago at a “Pete & Pete” reunion in Los Angeles.

“You’ve watched us over and over and over for 58 seconds, but we haven’t really done anything besides that,” singer Mark Mulcahy says. “We’re the tease of teases, you know? If you want to see us, then you’re probably pretty happy at this point.”

Originally, there was no Polaris. “Pete & Pete” creators Will McRobb and Chris Viscardi had asked Miracle Legion, a beloved New Haven, Connecticut, act, to record a theme song for the show. Miracle Legion at the time was stuck in record-label limbo, and questions over ownership of the band’s name precluded the musicians recording new material as Miracle Legion. The experience made guitarist Ray Neal wary of Nickelodeon’s offer, but with nothing else to do, Mulcahy accepted the invitation, and brought bassist Dave McCaffrey and drummer Scott Boutier with him. When it seemed like the trio should have a name, Polaris won out.

By the time the trio released “Music From the Adventures of Pete & Pete” in 1999, the show had been off the air for nearly three years. Polaris’ initial run ended when the show did, and Miracle Legion split the same year. Boutier and McCaffrey went on to play together in Frank Black & the Catholics; now Boutier is a stay-at-home dad with three sons, and McCaffrey is a special education teacher at a high school in Rhode Island. Mulcahy has since released four solo albums, including last year’s “Dear Mark J. Mulcahy, I Love You.”

With the tour looming, Mulcahy, Boutier and McCaffrey talked about the cult cachet of Polaris, delving back into the band’s slim catalog and the possibility of a full-on Miracle Legion reunion.

Why didn’t you tour back then?

Mulcahy: It was a thing that never had any of the normal approaches of any other band I’ve been in, which was to start a band and write some songs, play some gigs and make a record. The reason it was even Polaris is that we were kind of Miracle Legion, we were all kind of stuck in a bad record contract. When [McRobb] asked us to do it, no one really wanted to do it, so I said I’d do it myself. It was so much randomness. The only thing that was planned and direct was to write the song.

McCaffrey: The band was sort of specifically geared toward doing music for the TV show, and at the time, of course, Miracle Legion was still a band. At that time, if we played out, we were Miracle Legion. The album didn’t come out until after the show had already stopped.

How aware were you that the band had developed this cult status over the years?

Mulcahy: I’ve noticed some strange Wikipedia pages about it, and we played a gig in Los Angeles a few years ago, which was our first gig ever. It was a strange Beatles-at-Shea-Stadium thing for me. All these people knew all the words to the songs. I don’t really keep tabs on how many records get sold, but we must have sold enough records that people know the music. It’s really weird to put out a record in 1999 or something and then, well, maybe we should do a tour 15 years later. It’s completely out of the norm of what I’ve done. But that’s the selling point: the weird rareness of Polaris.

Boutier: I had no clue. We’d been asked to do some of those “Pete & Pete” reunions, and we just thought no. And they kept happening and happening, and we said, “Sure, we’ll go out.” In a way, it is kind of amazing that it’s happening without us really trying.

McCaffrey: One thing that really helped, I guess, was that every show opened with us playing, so it wasn’t just a one-off thing. Every time a kid sat down to watch “The Adventures of Pete & Pete,” it started off with Polaris, so maybe that imprinted Polaris in their minds.

So after playing one gig a couple years ago, why tour now?

Mulcahy: It started with this thing at New York Comic Con, and that was going to be it: this one show.

Are you a Comic Con fan?

Mulcahy: When I was a kid I liked comic books, but I always wonder if there’s something happening in comic books that makes them something grown-ups look at. I don’t really know what Comic Con is. I know it’s a tremendous promotional thing for Hollywood, because so many movies are comic-based now. It’s going to be interesting to be there. I’m going to be there for two days, so I’ll find out what it is.

There’s even a new song, your first as Polaris since the ’90s.

Mulcahy: There’s two songs: “Great Big Happy Green Moon Face” and another one called “Baby Tai Kwon Do.” I tried to write them like I was going back in time, in my head, which means nothing. I kind of ran them by Will, because that’s how all those songs as Polaris were written: He would say, “Yes, that’s a song we want.” So I played it for him and he goes, “Yeah, I think it’s pretty good, but it doesn’t have quite enough of this or that,” so I took his advice and tweaked it a little bit. It still sounds like a song I wrote anywhere in time, but it’ll be nice to have a new song — two new songs, really — and we’re putting it out as a cassingle, which is kind of how we started. The first thing we put out was the cereal box tape [a cassingle included in boxes of Frosted Mini Wheats in 1995]. We found a place that still makes those.

Will there be more new stuff?

Mulcahy: I thought about that this morning: Would we ever be able to make another album? I certainly would, depending on how all of this goes. If it goes well and seems like something we could keep doing, I think it would be good to make a record, but I also have a sense in my head — I don’t know if people want us to make another record. Like maybe, “This is what this band is, and I don’t want any more.” Two songs is probably OK, but I don’t know that we could sustain a whole — I don’t know. I’d love it do it, because I really like recording with Scott and Dave. It would depend on how backward or forward it felt, and right now — forgive this crappy metaphor — but I’m in neutral right now.

Would you ask McRobb to weigh in on any more new material?

Mulcahy: I would always keep Will involved. He’s the grandfather. He invented this whole thing. I want him involved. I wish he could be more involved. Even though he’s done a million things since, and he’s a very successful guy, this is what defines him, at least for me.

Mark, a couple of the old Polaris songs pop up in your solo sets. How much of the band’s music did you have to kind of rediscover?

Mulcahy: That was interesting. There’s a couple that I do, because they’re easy enough, and then some of them are a little bit harder. It was interesting to try to play them as a group and play them as they were arranged. But for me, playing with Scott and Dave, it’s too comfortable. It doesn’t really matter what song we play, because I’ve played a hundred million gigs with those guys. It’s terra firma. There’s nothing bad about it. The whole thing is just a super pleasure, you know? It’s nice to play a record you haven’t played that much, and we’ll probably put in a few other songs, maybe a few Miracle Legion songs that I don’t normally do because they’re hard for me to play. This is a chance for me to go into the deep cuts. Most Miracle Legion songs, Ray can play but I can’t.

McCaffrey: For me, they never really went away. I would listen to the album now and then, and my wife loved the album, so it wasn’t like they were out of my scope. Certainly when it came time to go play them, I had to sit down and do my homework and learn how the songs go.

Boutier: Toward the end of us playing dates as Miracle Legion, we may have thrown one or two of the songs in there. In a way, it was easy diving in there: listen to those songs and let’s play them. It wasn’t like digging through that large of a catalog. Here’s these 12 songs; that’s all we’re expected to play. There was certainly some rust. In a way, I guess it’s easier to practice for one show. If you’re doing multiple shows, you maybe want to know some other songs so you can change it up.

Given that Polaris is three-quarters of Miracle Legion to start with, what are the chances of a full reunion?

McCaffrey: I could see it happening, but will it happen? I’m not sure. Mark’s got his own thing going, and his album last year did well, and I love it. So he’s pushing his solo thing along as well.

Mulcahy: You certainly learn to say “never say never” in show business, but I don’t know. If there was a reason, yeah. I don’t imagine doing it just for the laugh. There’s some level of bands doing reunion tours, like the Pixies would be the top of the pile, and a million people want to see the Pixies, because they’re kind of a legend in a way. I know them a little bit, and I know they had no idea what was going to happen, and of course they’ve been completely reborn. And I know Dinosaur has done really well. I don’t know that Miracle Legion is quite that band. I could see us playing one gig or something, but nobody knows who actually cares. If we played in New Haven, it would probably be something. There’d be no reason why we wouldn’t do it.

Boutier: I don’t necessarily differentiate between the two. It’s just who’s playing and what songs we’re playing at that time. It’s not something I would say, “Yes, I’d like to do it,” or “No, I wouldn’t.” It’s still very surprising that Polaris is playing a show.