Cornel West: "The state of Black America in the age of Obama has been one of desperation, confusion and capitulation" 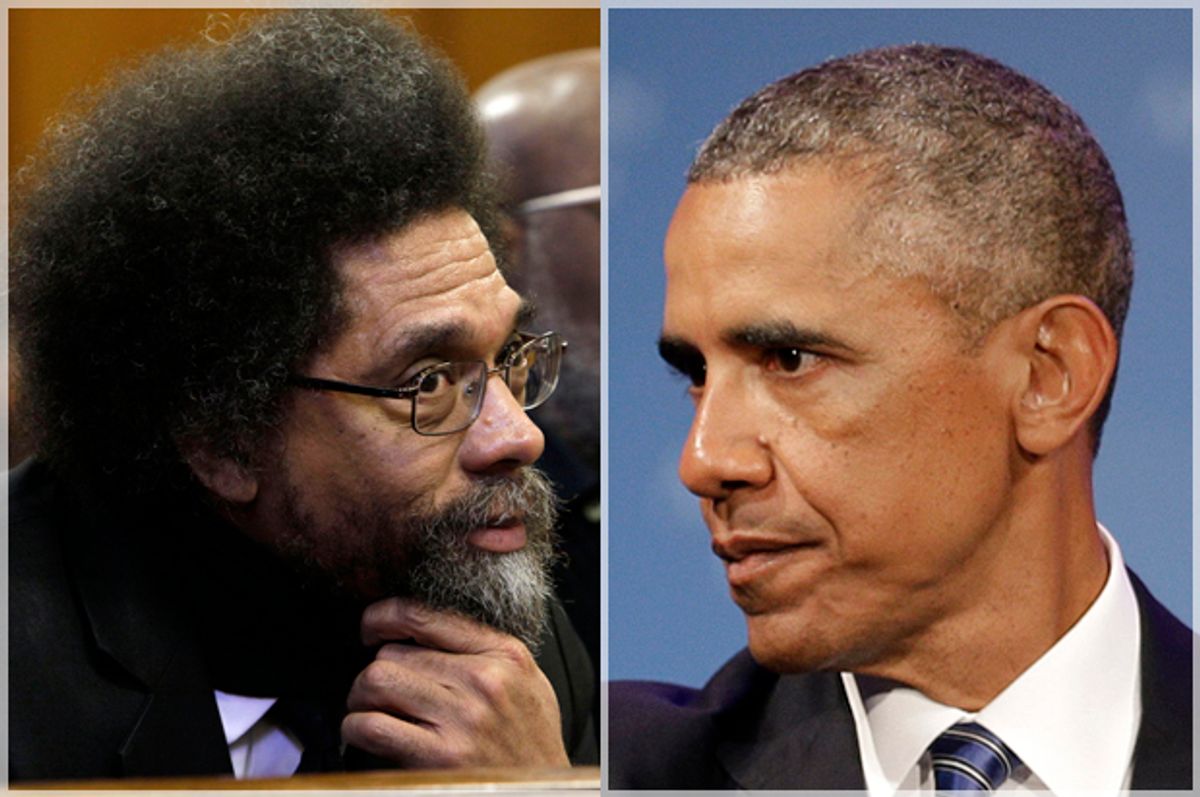 The great irony of our time is that in the age of Obama the grand Black prophetic tradition is weak and feeble. Obama’s Black face of the American empire has made it more difficult for Black courageous and radical voices to bring critique to bear on the U.S. empire. On the empirical or lived level of Black experience, Black people have suffered more in this age than in the recent past. Empirical indices of infant mortality rates, mass incarceration rates, mass unemployment and dramatic declines in household wealth reveal this sad reality. How do we account for this irony? It goes far beyond the individual figure of President Obama himself, though he is complicit; he is a symptom, not a primary cause. Although he is a symbol for some of either a postracial condition or incredible Black progress, his presidency conceals the escalating levels of social misery in poor and Black America.

The leading causes of the decline of the Black prophetic tradition are threefold. First, there is the shift of Black leadership from the voices of social movements to those of elected officials in the mainstream political system. This shift produces voices that are rarely if ever critical of this system. How could we expect the Black caretakers and gatekeepers of the system to be critical of it? This shift is part of a larger structural transformation in the history of mid-twentieth-century capitalism in which neoliberal elites marginalize social movements and prophetic voices in the name of consolidating a rising oligarchy at the top, leaving a devastated working class in the middle, and desperate poor people whose labor is no longer necessary for the system at the bottom.

Second, this neoliberal shift produces a culture of raw ambition and instant success that is seductive to most potential leaders and intellectuals, thereby incorporating them into the neoliberal regime. This culture of superficial spectacle and hyper-visible celebrities highlights the legitimacy of an unjust system that prides itself on upward mobility of the downtrodden. Yet, the truth is that we live in a country that has the least upward mobility of any other modern nation!

Third, the U.S. neoliberal regime contains a vicious repressive apparatus that targets those strong and sacrificial leaders, activists, and prophetic intellectuals who are easily discredited, delegitimated, or even assassinated, including through character assassination. Character assassination becomes systemic and chronic, and it is preferable to literal assassination because dead martyrs tend to command the attention of the sleepwalking masses and thereby elevate the threat to the status quo.

The central role of mass media, especially a corporate media beholden to the U.S. neoliberal regime, is to keep public discourse narrow and deodorized. By “narrow” I mean confining the conversation to conservative Republican and neoliberal Democrats who shut out prophetic voices or radical visions. This fundamental power to define the political terrain and categories attempts to render prophetic voices invisible. The discourse is deodorized because the issues that prophetic voices highlight, such as mass incarceration, wealth inequality, and war crimes such as imperial drones murdering innocent people, are ignored.

The age of Obama was predicated on three pillars: Wall Street crimes in the financial catastrophe of 2008; imperial crimes in the form of the USA PATRIOT Act and National Defense Authorization Act, which give the president sweeping and arbitrary power that resembles a police or neofascist state; and social crimes principally manifest in a criminal justice system that is in itself criminal (where torturers, wire tappers, and Wall Street violators of the law go free yet poor criminals, such as drug offenders, go to prison). This kind of clear and direct language is rare in political discourse precisely because we are accustomed to be so polite in the face of crimes against humanity. The role of the Black prophetic tradition has always been to shatter the narrow and deodorized discourse in the name of the funky humanity and precious individuality of poor people. How rarely this takes place today! The profound failings of President Obama can be seen in his Wall Street government, his indifference to the new Jim Crow (or prison-industrial complex) and his expansion of imperial criminality in terms of the vast increase of the number of drones since the Bush years. In other words, the Obama presidency has been primarily a Wall Street presidency, drone presidency, mass surveillance presidency unwilling to concretely target the new Jim Crow, massive unemployment, and other forms of poor and Black social misery. His major effort to focus on poor Black men was charity and philanthropy—not justice or public policy.

The state of Black America in the age of Obama has been one of desperation, confusion, and capitulation. The desperation is rooted in the escalating suffering on every front. The confusion arises from a conflation of symbol and substance. The capitulation rests on an obsessive need to protect the first Black president against all forms of criticism. Black desperation is part of a broader desperation among poor and working people during the age of Obama. The bailout of Wall Street by the Obama administration, rather than the bailout of homeowners, hurt millions of working people. The refusal of the Obama administration to place a priority on jobs with a living wage reinforced massive unemployment, and the sheer invisibility of poor people’s plight in public policy has produced more social despair among weak and vulnerable citizens. The unprecedented historical symbolism of the first Black president has misled many if not most Black people to downplay his substantial neoliberal policies and elevate his (and his family’s) brilliant and charismatic presence. Needless to say, the presence of his brilliant and charismatic wife, Michelle—a descendent of enslaved and Jim-Crowed people, unlike himself—even more deeply legitimates his symbolic status, a status that easily substitutes for substantial achievement. The cowardly capitulation of Black leadership to Obama’s neoliberal policies in the name of the Black prophetic tradition is pathetic. The role of the NAACP, National Urban League, and Black corporate media pundits, who so quickly became Obama apologists, constitutes a fundamental betrayal of the Black prophetic tradition. The very idea of Black prophetic voices as an extension of a neoliberal and imperial U.S. regime is a violation of what the Black prophetic tradition has been and is. This violation enrages me when I think of the blood, sweat, and tears of the people who created and sustained this precious tradition. The righteous indignation of the Black prophetic tradition targets not only the oppressive system that dominates us but also the fraudulent figures who pose and posture as prophetic ones while the suffering of the people is hidden and concealed. To sell one’s soul for a mess of Obama pottage is to trash the priceless Black prophetic tradition. Is it not hypocritical to raise one’s voice when the pharaoh is white but have no critical word to say when the pharaoh is Black? If the boot is on our neck, does it make any difference what color the foot is in the boot? Moral integrity, political consistency, and systemic analysis sit at the center of the Black prophetic tradition.

Since the rise of the neoliberal regime, the Black struggle for freedom has been cast or reduced to an interest group, one among other such groups in American politics. Even the motto of the Black Congressional Caucus, the apex of Black elected officials, is “We have no permanent friends or permanent enemies—only permanent interests.” How morally empty and ethically deficient this motto is— no reference to moral principles, ethical standards, or grand vision of justice for all; just permanent interests, like the Business Roundtable for Wall Street oligarchs, the American Israel Public Affairs Committee (AIPAC) for the security of Israel, or the National Rifle Association for gun ownership. The Black prophetic tradition indeed includes interests but goes far beyond such narrow calculations and stresses a moral high ground of fairness and justice for all. The Black prophetic tradition surely begins on the chocolate side of town, but like the blues and jazz, it has a universal message for all human beings concerned about justice and freedom.

Excerpted from "Black Prophetic Fire" by Cornel West in Dialogue with and Edited by Christa Buschendorf. Copyright 2014. Excerpted with permission by Beacon Press. All rights reserved.