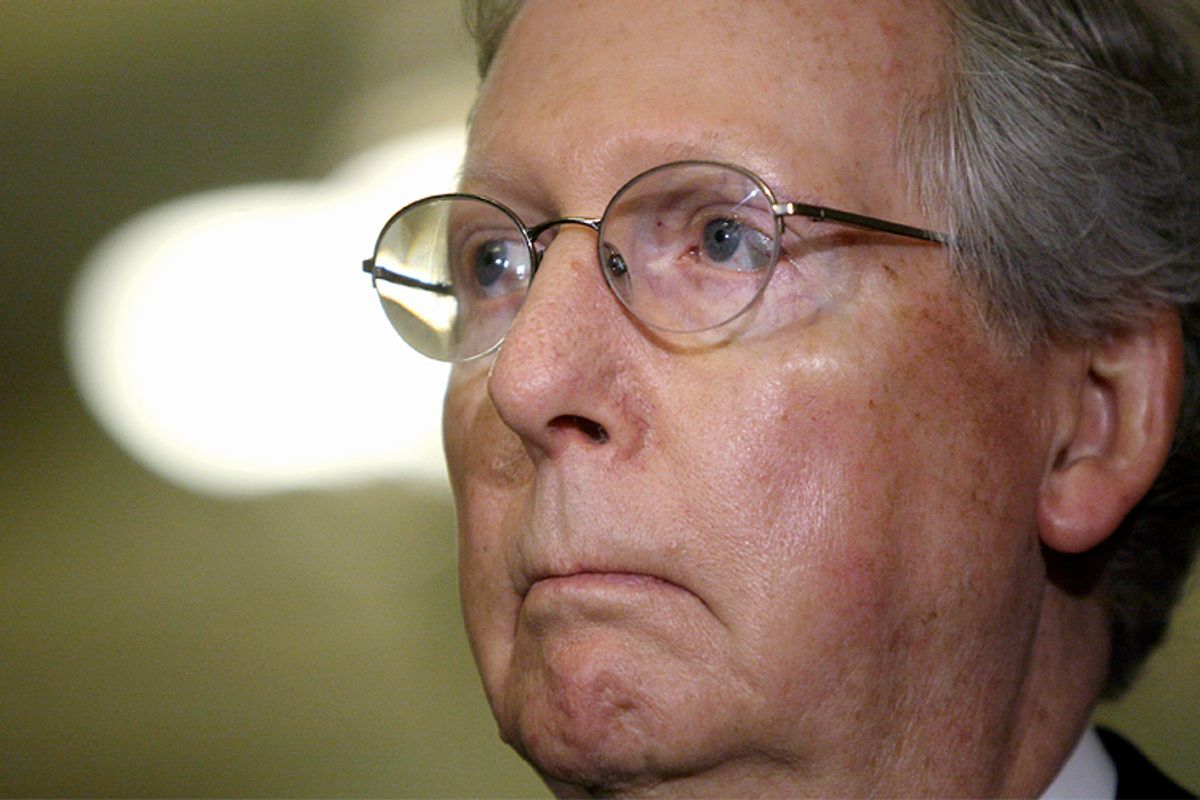 When a poll this week showed Democratic challenger Alison Lundergan Grimes leading Kentucky Sen. Mitch McConnell by two points, it provided a glimmer of hope for Democrats in a contest that had seemed to slip away from the party’s grasp over the summer.

Still, the Bluegrass Poll, which found Grimes ahead 46 to 44 percent, remains an outlier for now. Prior to this week, Grimes hadn’t led in a single independent poll since June, with most surveys showing McConnell building a lead in the mid-single digits – roughly in line with the 53 to 47 percent victory he won six years ago, when it had also briefly looked like the incumbent was in jeopardy. This time may yet be different, but we can’t safely say that the race has moved appreciably in Grimes’ direction until we see a few more surveys that dovetail with the Bluegrass Poll.

But there’s reason to believe that McConnell may fear for his political career more than his campaign's confident pronouncements let on. The evidence doesn’t come in the form of yet another bad poll for the senator. Instead, his bizarre appearance on Kentucky Sports Radio today reeks of political desperation.

The backstory: Grimes appeared on KSR host Matt Jones’ program a few weeks ago, much to the McConnell camp’s consternation, and Jones was eager to get McConnell on the show as well. Jones had trouble nailing McConnell down for a date – until, Jones says, the senator suddenly called in and demanded to be included on the show with just 10 minutes’ notice. The host obliged. What followed was nothing short of awkward:

Much of the conversation, predictably, centered on sports. Even on that topic, McConnell sounded every part the crank.

“It is OK, I know it’s not acceptable to you as an Obama enthusiast, but it’s OK to be for both Louisville and Kentucky [sports teams]” he told Jones.

With even the sports talk infused with bitter political jabs, the purely political part of McConnell and Jones’ conversation hardly went any better. The two sparred over McConnell’s opposition to a minimum wage increase, the Affordable Care Act, and marriage equality. Things got particularly heated, though, when Jones pressed the senator for his views on climate change.

The senator went on to echo Colorado Republican Senate candidate Cory Gardner, declaring that the question of whether humans contribute to climate change “is not a yes or no question” and reiterating, for those who had any doubts, “I am not a scientist.”

After the interview concluded, Jones slammed McConnell as “needlessly angry,” while a producer offered that the senator “came across as a little bit of a jerk.” He certainly did not come across as a man who’s serenely confident less than four weeks before voters head to the polls.