America's sex and race failure: Why Raven-Symone and an Ohio couple are struggling

How a TV star shunning labels, and a lesbian couple with a Black baby illustrate the fight to assert one's humanity 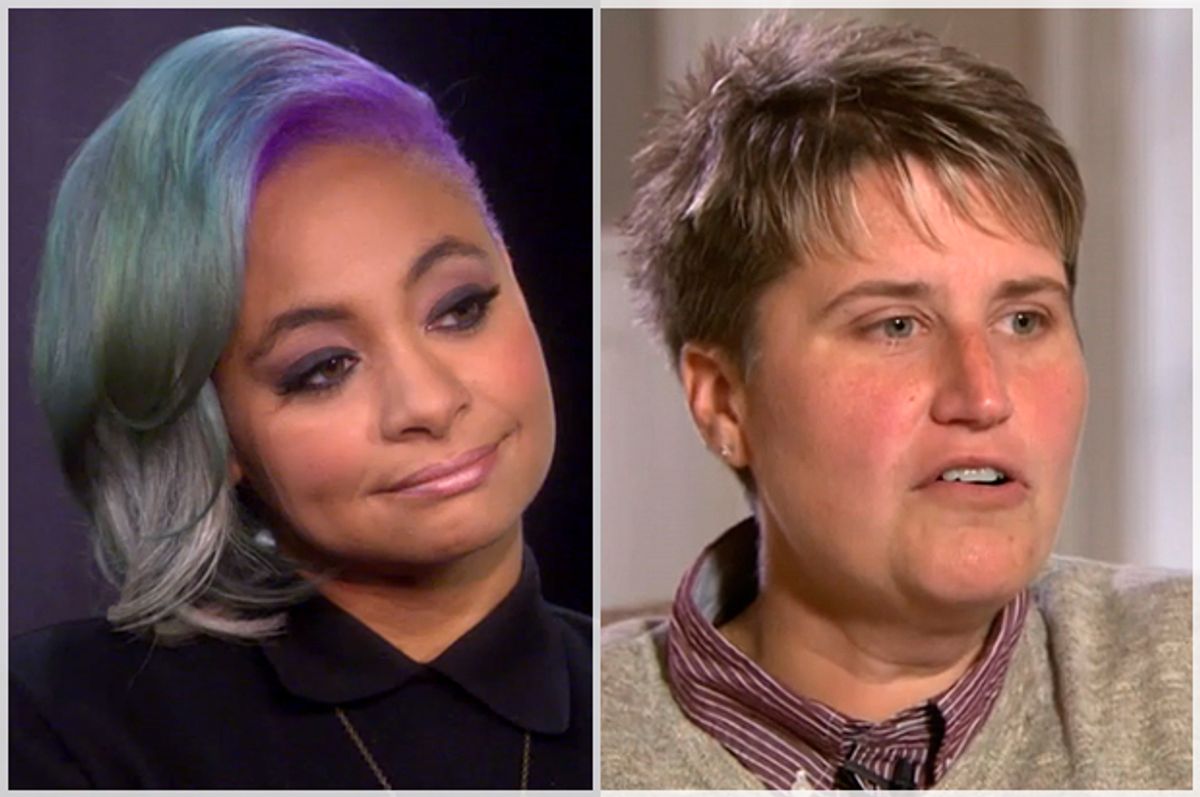 This week, iconic Cosby (grand)kid Raven-Symoné caught up with Oprah, telling her in an interview: “I don’t want to be labeled gay….I’m a human who loves other humans. …I’m American not African American.  I don’t know what country I’m from in Africa, but I do know I have roots in Louisiana. I’m an American, and that’s a colorless person.” It would be tempting to frame these recent remarks on race and gay identity from the Cosby Show and Disney star as just more ideal and myopic millennial musings on race. But I think her comments tell us something about the operations of contemporary notions of the “human” that are worth unpacking.

Let me begin by saying that using one’s Louisiana roots is perhaps the worst place to begin in an argument about how the term “American” is a “color-less” one. Both sides of my family have lived in Louisiana since the earliest census records I could find. That census, the 1870 census was the first to record the names of all the black people that had been freed within the last decade. With great care, citizens were designated with a “C,” “M,” or “W,” for “colored,” “mulatto” and “white” respectively. Well into the late 20th century, my grandmother referred to Black people as colored.

Certainly, Raven-Symoné’s arguments bear the trace of the postracial rhetoric so prominent among certain (though not all) segments of millennials.  But her desire to not acknowledge or carry the “African” designation in “African-American” is far from new. To be clear, many Black people who are Americans, are not “African American” in the sense that we mean that term today, namely as native born Black people. Voluntary rather than forced migrations of diasporic Black people from the Caribbean and from West Africa have been a characteristic of the U.S. Black population since the early 20th century.  The side eye I’m giving to Raven-Symoné is not about a desire to demand that all Black people in the U.S. take on the moniker “African American,” but rather about the fact that her framing suggests that it is the connection of Africa to blackness that has her wanting to disavow a hyphenated identity.

For instance, she refers to her racial identity by calling her skin “darker” (but not black or brown) and characterizing her hair as having a “nice and interesting texture.” She is well aware of being raced, invoking the tell-tale signs of cultural-racial identifications, namely skin and hair, to describe herself. But her internalized sense of anti-blackness seeps through the careful layers in the hesitant ways that she describes her skin as “darker” when of course by Louisiana standards “she’s bright-skinned” and can assuredly access light-skin privilege. And her description of her hair texture as “nice” suggests that there are hair textures that are not “nice,”or “good” as is the more common refrain in African American communities.

Among the many things I find troubling in her statement is the idea that America is color-less. It is a society built on a foundational color schema in which black skin is figured as the condition for unfreedom and white skin as the condition for freedom. Louisiana itself had a notoriously restrictive definition of the one drop rule as Dr. Yaba Blay discusses in her book “One-Drop: Shifting the Lens on Race,” Louisiana law classified all people with “one-thirty-second or less” of Negro blood would be “deemed, described, or designated” officially as ‘colored, ‘mulatto,’ ‘black,’ ‘negro,’ ‘griffe,’ “Afro-American,’ ‘quadroon,’ ‘mestizo,” ‘colored person,’ or ‘person of color.’ Well into the 1980s, i.e. well into Raven Symoné’s lifetime, this law was used to designate putatively white people as black.

Why then is the identity of “American” figured as the site of freedom and liberatory identity? To see one’s “dark” skin as limiting bears all the marks of the anti-black thrust of white supremacy. This is an uncomfortable truth to tell in a world where more and more brown-skinned people are uncomfortable with the strictures of Blackness, hoping that 20th century racial identifications will loosen their vice grip on the current one.

Then there is her refusal of the identity of “gay.” This makes more sense to me. As a gender studies scholar, I’m deeply aware of the way in which same-sex relationships and queer sexual identities exist along a whole spectrum, so that one’s attractions might not be aptly or accurately characterized as “gay.” Still, the ease with which Symoné so fearlessly claims her queer same-sex relationship in public has everything to do with her being a beneficiary of the gay rights struggle and of the work of Black gay luminaries like Audre Lorde, James Baldwin, Marlon Riggs, Lorraine Hansberry and Barbara Smith who have preceded her, proudly proclaiming both their queerness and their blackness.

But Raven-Symoné’s desires are also not to be understood outside of a long trajectory of Black people grappling with what Langston Hughes, a gay Black man, called “the racial mountain.” W.E.B. DuBois famously referred to this as a kind of “two-ness,” “two thoughts, two unreconciled strivings, two warrings in one dark body.” George Schuyler, a Harlem Renaissance era Black conservative, derisively dismissed a notion of Black American identity arguing, “The Aframerican is merely a lampblacked Anglo-Saxon…indistinguishable from the mass of Americans. …aside from his color…your American Negro is just plain American.” In his 1961 essay, “The Discovery of What It Means to Be an American,” James Baldwin declared himself as “American as any Texas G.I.” But he also cautioned that America like all societies “is really governmed by hidden laws, by unspoken but profound assumptions on the part of the people,” and that we (writers) should give ourselves to exposing them so that that we might be liberated from them.

More recently, playwright and novelist Trey Ellis declared in a famous manifesto in 1989 called the “New Black Aesthetic” that “We're not saying racism doesn't exist, we're just saying it's not an excuse.” His words sound strikingly similar to singer/songwriter Pharrell’s claim earlier this year, that "the New Black doesn't blame other races for our issues. The New Black dreams and realizes that it's not pigmentation: it's a mentality and it's either going to work for you or it's going to work against you. And you've got to pick the side you're going to be on. “

For at least a century, Black people have been grappling with what their blackness means, accepting it, reveling in it, resisting it, redefining it, reducing its salience, and laying it to the side. These “New Blacks” or “Brand New Negroes” as I have previously called them, are not particularly new or original in either their struggle or their solution. In Raven-Symoné’s case, her refusal to identify as a person of African descent feels like an internalization of anti-blackness offered up as a kind of cosmopolitan notion of race.

My Louisiana Black self is not here for it. That is in large part because I don’t feel “relegated” to Blackness. I’m not “resigned” to it. I was assigned blackness at birth, but I choose it each day as a political and cultural identity and set of commitments.

If Raven throws off those political and cultural identifications, that is her right, but it is not without political implication or consequence.

And it is particularly ironic to see this queer Black girl refusing identifications that have been politicized and embraced in the world by other queer Black people attempting to make space for all these groups to exist as human.  I’m reminded here of the largely queer Black organizers of the Black Lives Matter campaign doing such important work in this moment in Ferguson.

This kind of rhetorical move is also salient coming on the heels of recent reports of an Ohio lesbian couple opting to sue their sperm bank for erroneously giving them black donor sperm.  I get suing for negligence and shoddy service. But for this queer couple, the presence of their Black daughter disrupts their ability to exist comfortably in the space of whiteness that defines their community, a community that they admit is deeply homophobic. Having chosen to be a queer family in the midst of a heteronormative white universe in Ohio, their Black child has now disrupted their access to white power and privilege. This biracial black girl is growing up with distraught, devastated queer parents who love her despite her blackness. Having internalized antiblackness, they note their discomfort with taking her to a black neighborhood for haircuts and their fear of the racist reprisal of neighbors and family members.

Just a few shades lighter than Raven-Symoné,  their daughter’s connections to blackness and queerness will not so easily be thrown aside. She is a Black girl, and is understood as such by her family and community. Her blackness has been disruptive, inconvenient, and stigmatizing – for her white mothers. But what her queer parents share in common with Raven-Symoné is an internalization of anti-blackness and a tortured attempt to grasp on to some notion of the American dream, that blackness seems to be preventing.

Though Raven Symoné is that odd and unique admixture of American Louisiana Black and not biracial, her discomfort with the fact of her own blackness, and with the limits of a gay label are in some ways connected to the failure of the American project to understand humanity in ways that fully include queer and Black people. Thus Raven makes the millennial maneuver of thinking that the fictiveness of race means that simply throwing off the labels will free her. That will no more work than thinking that putting race in scare quotes will disappear racism.

Race and gay identity may be social constructs, but so are buildings – which is to say, neither despite their origins, is without consequence for the material world. There indeed is nothing “natural” about race. But one's “natural” inclinations to duck and dodge its tentacles will not in fact stop their all-consuming reach.

Asserting one’s humanity in the face of such obstacles is a move I can empathize with. We force Black and queer folks to assert their humanity all too often. But as Dara Tafakari asked on Twitter, “Why is it when celebrities want to distance themselves from Blackness, they emphasize humanity? Why are the two seen as mutually exclusive?”

Perhaps Raven-Symoné simply wants to remove herself from the racial project and political legacy of the Cosby Show, which 30 years ago was deeply invested in representing “the best” of American Blackness. But she, and those Ohio mothers, would do well to recognize that it is precisely America’s deeply homophobic and anti-Black conceptions of who is human that have created these problems in the first place. Turning back to them for salvation is not the solution.