Two of our best actors fall into empty, reassuring fairytales of male redemption with "The Judge" and "St. Vincent" 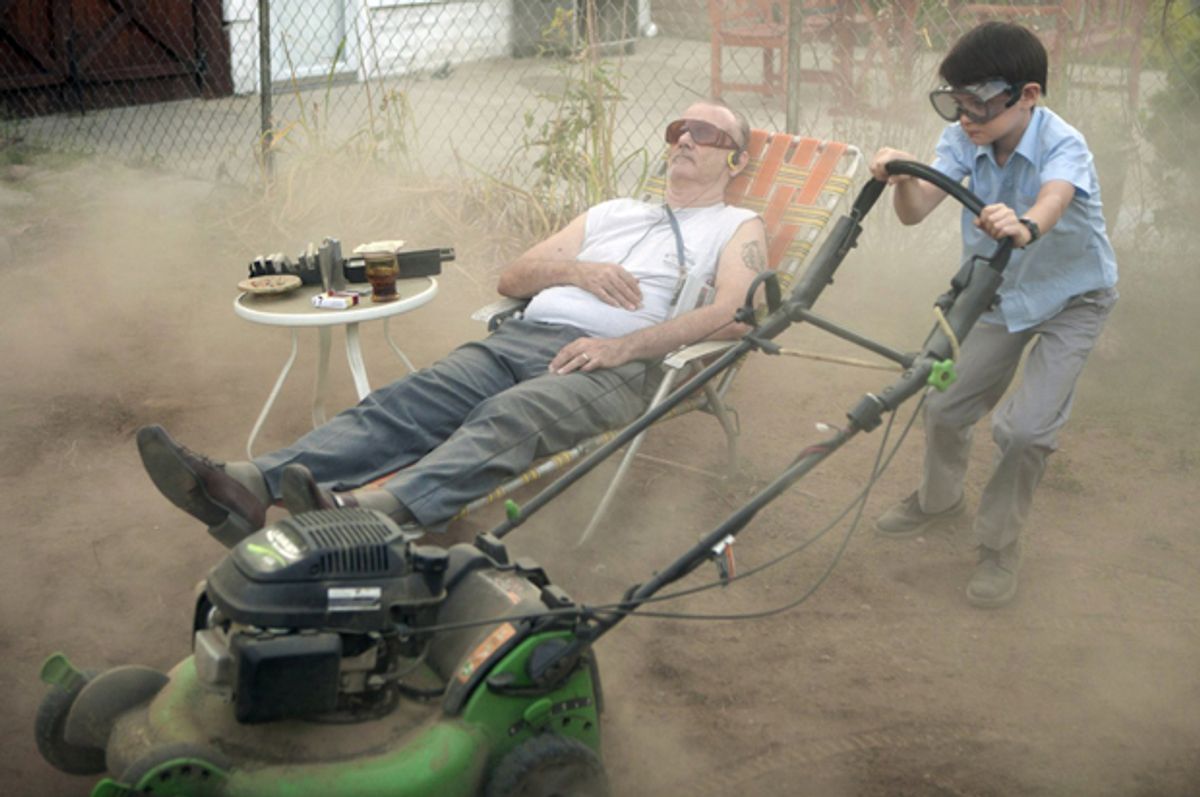 On balance, I’d rather see Robert Downey Jr. playing a metal-clad superhero than striking a lot of actorly poses in a superficially meaningful “human” drama like “The Judge,” in which he plays a soulless big-city lawyer who reluctantly returns to his picturesque Indiana hometown, where – surprise, surprise – he encounters a measure of redemption. It’s less like a story than an oft-told fable, or at least a simulation of one, a set of familiar gestures meant to engage a set of audience reflexes and unconscious yearnings. Here’s the star looking pensive in a shot held for several seconds – that alone is supposed to pierce us to the heart – while whimpery pop music plays. Here he is digging his old bike out of the garage, and his old Metallica T-shirt out of the closet. Here he is embracing his mentally disabled younger brother (no, I’m not kidding), or strolling into the hometown bar now owned by his (extremely hot) onetime sweetheart.

Once a famous Hollywood problem child, Downey is now an A-list star, which comes with its own set of risks. High among them is making this kind of “star package” movie, which is simultaneously overstuffed with plot detail and not actually about anything. Can you make a movie starring Downey and Robert Duvall, two of the finest living American actors, as an estranged father and son, stuff Vera Farmiga, Billy Bob Thornton and Vincent D’Onofrio into supporting roles, and still have it turn out dreadful? Well, the Hollywood dream factory’s ability to spin gold into lead is legendary, but “dreadful” is probably the wrong word. “The Judge” is watchable but thoroughly specious. It’s dull and reassuring, an infantile fantasy of homecoming and forgiveness set in a mythical version of America no one in the target audience has ever seen. It’s two-plus hours expended on a dumbed-down version of the last book of “The Odyssey,” with a few flashback references to some battles and monsters that don’t matter anymore.

I’m sure Downey’s agent and financial advisor urged him to make this film, and I’m also well aware of the industry calculation at work: This kind of lightweight, heart-warming melodrama, in which both the star and the audience are “protected” – Downey’s supposedly roguish character is never all that despicable, and makes all the choices we want him to make, precisely on schedule – plays well with audiences. It’s “what people want.” Whereas I say the hell with people and what they want. People also want fast food, celebrity gossip and reality TV; they seem delighted to prostrate themselves before the national-security state and deliver every detail of their lives to any corporate entity with the right user interface. Just because they eagerly suck down second-chance fairytales in which all past sins are absolved and we all get another go-round at life and love doesn’t make them healthy.

It’s not exactly coincidence that Bill Murray, another great actor with an uneven career arc, has just made a version of the same story with “St. Vincent,” also out this week. (Or, for that matter, that Jason Bateman, Tina Fey, Adam Driver, et al., delivered the suburban-family ensemble take on this myth a few weeks ago in “This Is Where I Leave You.”) “St. Vincent” is a grittier, more indie-flavored tale, with Murray as a curmudgeonly Irish-American drunk, Melissa McCarthy as his single-mom Brooklyn neighbor and Naomi Watts as, no lie, the Russian hooker with a heart of gold. While first-time writer-director Theodore Melfi crafts a more convincing simulacrum of realism than the Hollywood factory that produced “The Judge” -- and Murray, as always, supplies any number of small, memorable moments -- he ultimately relies on the same defanged sentimentality. In both cases, the end of the story is implicit in the beginning: Downey’s high-priced scumbag lawyer and Murray’s misanthropic gambler and boozehound are never bad people, only misunderstood (by others and by themselves). Indeed, they are only people who have convinced themselves they are bad, based on a faulty interpretation of the evidence. Since no one is actually bad, all that’s required is the intervention of the adorable tot, hard-ass parent or hot chick who shows up to inform them they are in fact awesome. (Each of these movies has two of those three ingredients.)

It’s not like the fable of the scoundrel redeemed is some new idea, and it wasn’t new when Charles Dickens wrote “A Christmas Carol” either. But at least Ebenezer Scrooge really is a flint-hearted old miser who behaves abominably; it takes quite a bit of spiritual spelunking, mingled with terror of the hereafter, to reveal his injured, Christmas-loving inner child. You could say the same of Jack Nicholson’s Oscar-winning performance as Helen Hunt’s mean-spirited and homophobic neighbor 17 years ago in James L. Brooks’ “As Good as It Gets,” which feels like the unacknowledged modern template for all such stories. Of course we come to Scrooge, or to Nicholson’s Melvin Udall, hoping they will be redeemed by a sentimental education, will right their wrongs and expiate their sins. But compared to today’s pre-redeemed, affection-swaddled semi-scoundrels – who make the long, arduous moral trek from not-so-bad to awesome -- those guys look like Raskolnikov. We want the sentimentality without the education, forgiveness without expiation; we want assurance that there are no evil people, so that we don’t have to consider whether we have tolerated them, enabled them or become them.

”The Judge” and “St. Vincent” both open in theaters this week.