"It breaks my heart": How a SWAT team upended my baby's life -- and got away with it

A SWAT team blew a hole in my 2-year-old's chest -- and just got off scot-free. But here's why it gets even worse 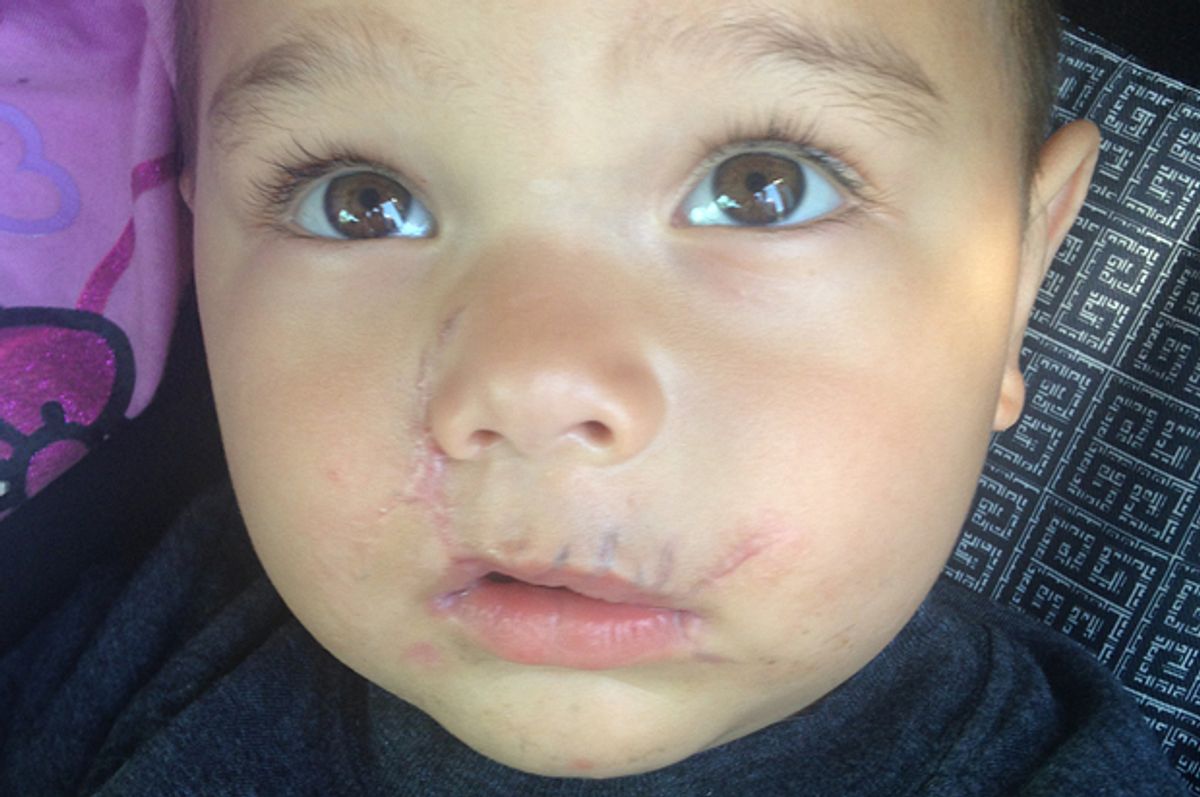 My son will be 2 years old next week. He’s recovering from a total of eight surgeries, one of which was to reattach his nose to his face.

For those who don't know, it’s been over five months since the night a SWAT team broke into the house in which we were staying. It was the middle of the night, and even though our minivan with car seats inside was parked in the driveway and our children’s toys were in the yard, the SWAT officers claimed they had no way of knowing there were kids inside. We were staying with relatives and my whole family was sleeping in one room. My husband and I, our three daughters and our baby (nicknamed "Baby Bou Bou") in his crib.

Dressed like soldiers, they broke down the door. The SWAT officers tossed a flashbang grenade into the room. It landed in Baby Bou Bou’s crib, blowing a hole in his face and chest that took months to heal and covering his entire body with scars.

On Monday, we were devastated and heartbroken by the grand jury’s decision to not charge any of the officers involved in injuring our son. I relive that night every time I hold my son, see my daughters afraid and watch my husband in pain. Bou Bou will be 2 years old next week, and my gift to him will be my continued commitment to demand justice for what was done to him. We will not give up, we will not remain silent – we will continue to fight.

Bou Bou’s birthday is October 14. We are very happy we can celebrate with him — after the raid, we weren’t sure if he would make it. But our joy and relief he is alive can’t take away any of the psychological damage done by that raid. We’ve been trying to find a new normal ever since. But it’s been hard.

First Bou Bou was in intensive care and we spent all our time at the hospital, not knowing whether he would live. He came out of the medically induced coma only to be subjected to surgery after surgery. My tiny son has had eight operations in the last five months. In the most recent one, surgeons opened up his chest to scrape away all the scar tissue that was attached to the bone and reopened his face to reattach his nose. And it’s far from over. Doctors tell us that my son will have to have double reconstructive surgeries twice a year, every year for the next 20 years.

He’s not even 2. No child should have to endure what he’s going through. This shouldn’t have to be his new normal.

The SWAT officers were searching for a relative who did not live in the home where we were staying. They suspected he might have some drugs, and for that reason alone, they raided the house, armed for war. They never found what they were looking for. But they crippled my family.

Not only did they blow up my son, but they also violently threw my husband to the floor. His shoulder is still so injured that he cannot care for our kids alone and awaits surgery himself. Before this happened, my husband and I worked vigorously the last 10 years to be free of debt. But now I have to stay home, and in five short months our family has taken on nearly $900,000 in medical bills, some of which have now gone into collections.

The SWAT team raid happened while we were staying in Habersham County, Georgia. After initially offering to cover the medical expenses, the county has since refused to cover any of our medical costs, all of which would never have happened if the SWAT team hadn’t broken into the home. The county refusing to pay has been very hurtful.

My kids have nightmares all the time. We all find ourselves waking up in a cold sweat, remembering that night.

Baby Bou Bou will not leave my husband’s and my side, even at our house. He wants to be constantly held. Our 3-year-old daughter is also very clingy and it is very hard for her to go to school. Bou Bou and I have been going with her and sitting at school all day. Otherwise she won’t stay.

Our days are really difficult. There are no words that can describe the hurt I feel in my heart when I try to explain to my kids what happened. As a mother, I just don’t know what to do some days. Everything’s just been so difficult and it feels like it will never get better.

I can’t explain to my kids that the cops are there to help them. They know otherwise, and they’ve been traumatized by it. My kids don’t even feel like I can protect them. When we’re at the mall and see security guards, they’re scared. It breaks my heart.

But I know that we are not the only ones suffering. I watched what happened in Ferguson this summer. It’s a tragedy, but I want the people there to know that the battle they’re fighting, they’re not alone. My family is standing with them and fighting with them. And all across the country, I know we need to get the grenades and the other military equipment out of the cops’ hands. It doesn’t matter how well law enforcement is trained to use military weaponry; it has a lot to do with their views and culture -- if there’s a culture of racism, training will not make a difference.

My family is struggling, but we thank everyone for their prayers and their support and we’ll continue to fight until we get justice. This is not a one-person battle, but a community fight. We need to stop the militarization of police.