"Whiplash" examines the line between education and abuse 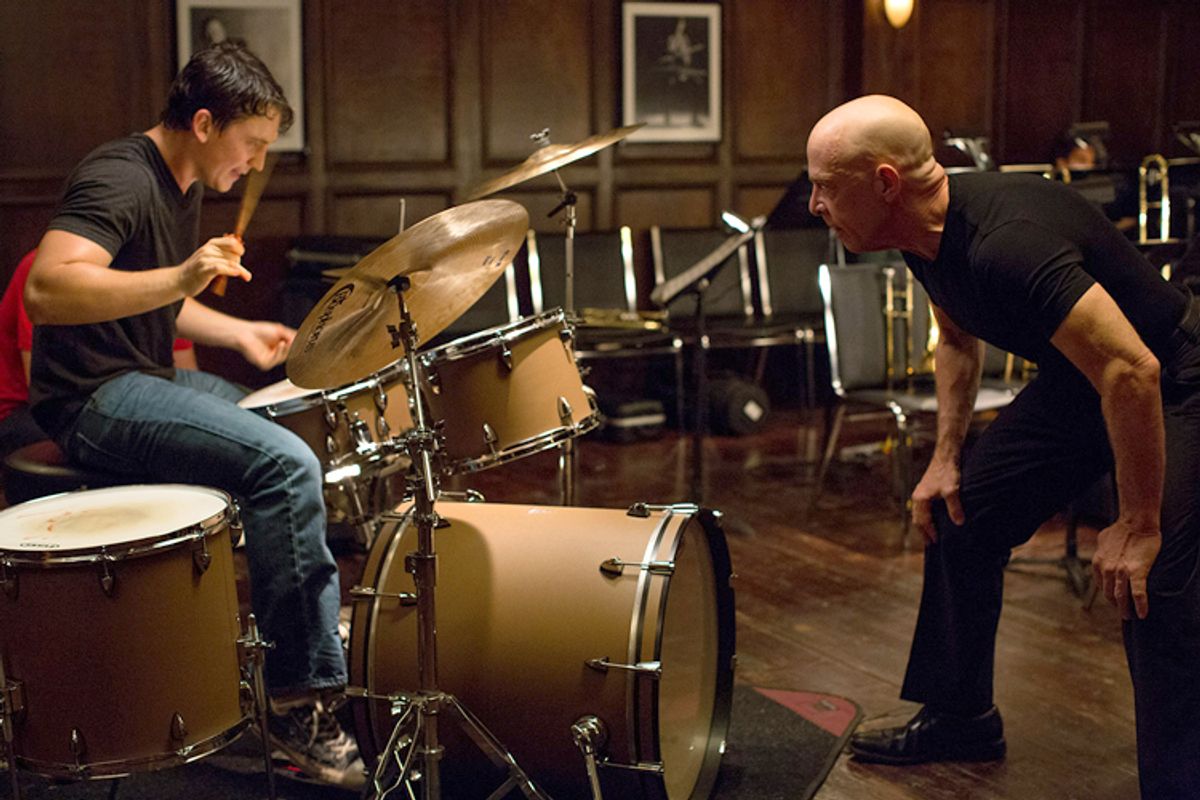 Provocative and emotionally intense, and built around propulsive performances from a pair of actors who drive each other forward, writer-director Damien Chazelle’s “Whiplash” was the breakout hit at Sundance this year. It hits theaters this week, right after its New York Film Festival rollout, and looks from here like a probable Oscar nominee in one or more major categories. (In fairness, this year's field is overcrowded and unpredictable.) What’s more, “Whiplash” possesses an unexpected cultural resonance, engaging contemporary debates about education, coaching and the ways we nurture those ambiguous qualities called “excellence” or “genius.” (This is a revised and expanded version of a review I published from Sundance, incorporating my observations from a second viewing.)

“Whiplash” has already provoked some controversy and may spark more. I think it’s a mistake to assume that Chazelle is entirely endorsing the sadomasochistic teacher-student relationship at its center, or declaring that that’s the best way to teach music or art or anything else. He is, however, saying that abuse and brutality are one way to teach, and can be highly effective if you decide you don’t much care about the damage caused along the way. My father always used to talk about how much he hated the Christian Brothers back in Dublin, who whacked him on the knuckles every time he screwed up conjugating a Latin verb. But he learned the verbs, and grew up to become a prominent scholar. You can consider “Whiplash” the “Zero Dark Thirty” of jazz movies, and the comparison is less facetious than it sounds.

Chazelle, who is only 29, made one previous feature when he was barely out of college, a whimsical jazz musical called “Guy and Madeline on a Park Bench” that barely made it off the festival circuit in 2009. “Whiplash” is also about jazz, at least on the surface, but that’s where the similarity ends. If “Guy and Madeline” was a retro confection set in an imaginary world, “Whiplash” is a muscular and accomplished work of kinetic cinema set in the paradoxical world of the jazz conservatory, where a music that was once an informal, improvisational form learned in smoky nightclubs and all-night jam sessions has effectively become a subset or adjunct of classical music. built around two tremendous acting performances, and it’s really about teaching and obsession and the complicated question of how to nurture excellence and where the nebulous boundary lies between mentorship and abuse.

Chazelle clearly understands the intensely competitive world of music education, but the real subject matter of “Whiplash” is the nebulous boundary between mentorship and abuse, between challenging a student to do better and breaking his will. It’s a movie about jazz to precisely the same extent as “Black Swan” is a movie about ballet. Miles Teller really does play the drums, and that’s where his character, a socially awkward 19-year-old named Andrew, is most at home. (A professional drummer’s hands are used for the most difficult passages, but Teller is genuinely pretty good.) The big-band musical performances in the film are intensely compelling and beautifully orchestrated; they drive the drama forward to a large extent, just as the big game drives a football movie or opening night drives a backstage musical. Chazelle also captures the fact that music is a physical endeavor, a fact exaggerated by the demands of the drum kit; Andrew literally sheds blood, sweat and tears in his pursuit of greatness.

If there’s another genre to which “Whiplash” belongs, it’s the boot-camp movie, with J.K. Simmons’ suave and profane Terence Fletcher as the drill sergeant. Fletcher leads the top-ranked jazz ensemble at New York’s top-ranked music school – I think the fictional model is the Manhattan School of Music, rather than Juilliard -- and he rapidly seizes on Andrew, both for his obvious talent and his obvious vulnerability. From the first moment between them, when Fletcher asks Andrew to play and then leaves without paying attention, it’s clear that Andrew’s eagerness to please has caught Fletcher’s eye, not necessarily for healthy reasons. Andrew appeals to Fletcher’s sadistic urge to dominate, to break down his students’ personalities and remake them in his own image. But the question Chazelle wants to ask us is not an easy one: Is some version of that necessary, however contained and mitigated, if we want to train great drummers, great dancers, great doctors and great engineers?

Teller gives a raw, fearless almost naked performance as Andrew, but even in a year that looks overloaded with memorable male roles, I’m sticking on the 2015 Oscar bus with J.K. Simmons right now. A bald, wiry, growly fellow recognizable to generations of movie and TV viewers for his roles in HBO’s “Oz,” the cop series “The Closer,” Sam Raimi’s “Spider-Man” trilogy and many others, Simmons has always been a potent and precise screen presence. But Fletcher is the masterpiece of his career to date, a magnetic, commanding and duplicitous figure whose every gesture is controlled and considered and whose inner world remains under wraps. His teaching style rests largely on vicious and offensive homophobic mockery: “That’s not your boyfriend’s dick; don’t come too early,” he tells a sax player. But the young men (and a smattering of women) in his ensemble clearly respect him and respond to him. The impossible challenge faced by Andrew, a raw and unformed kid who still goes to the movies with his dad (a nice supporting turn for Paul Reiser), is to figure out how far this guy can take him, and whether to submit to tyranny, resist or walk away.

Fletcher will start the band and stop them seconds later — after four bars, or even two — to hunt down an out-of-tune trombonist, or swap out a front-line player for an alternate. He pits Andrew against two other drummers, including the older incumbent, in a harrowing, hours-long showdown aimed at compelling one of them to play a fantastically difficult beat (on an up-tempo composition that lends the film its title) exactly the way he wants it. But as his relationship with Andrew develops into malice, brutality and even literal violence, our understanding of Fletcher becomes more complicated. Late in the film, Andrew sees Fletcher playing jazz piano in a nightclub — quietly, and beautifully — and the two have a drink while Fletcher explains his pre-modern educational philosophy: “No words in the English language are more dangerous than ‘good job.’”

Now, I know plenty of people (in the home-schooling world, for instance) would agree with him, at least to a point. If Fletcher really existed, his Nietzschean tactics would likely get him fired as the football coach at Oklahoma, let alone as a music professor. But he could also making a mint preaching his philosophy on Dr. Phil’s program, until he spun off into his own tough-love franchise. There are some bothersome limitations in a powerful and ambiguous movie that struck me, two-thirds of the way through, as among the year’s very best. Chazelle introduces a sequence of melodramatic plot twists that feel extraneous to the love-hate story of Andrew and Fletcher, and defaults to a fascist-flavored conclusion he may not have thought through all the way. With that caution, “Whiplash” is a thrilling viewing experience, one that marks the emergence of a remarkable young American director and the breakout performance of a great American actor who’s been with us for decades.

"Whiplash" is now playing in New York and Los Angeles, with national release to follow.