For all his odes to liberal ideals, Maher's latest effort to demonize Muslims reveals a disturbing, illiberal truth 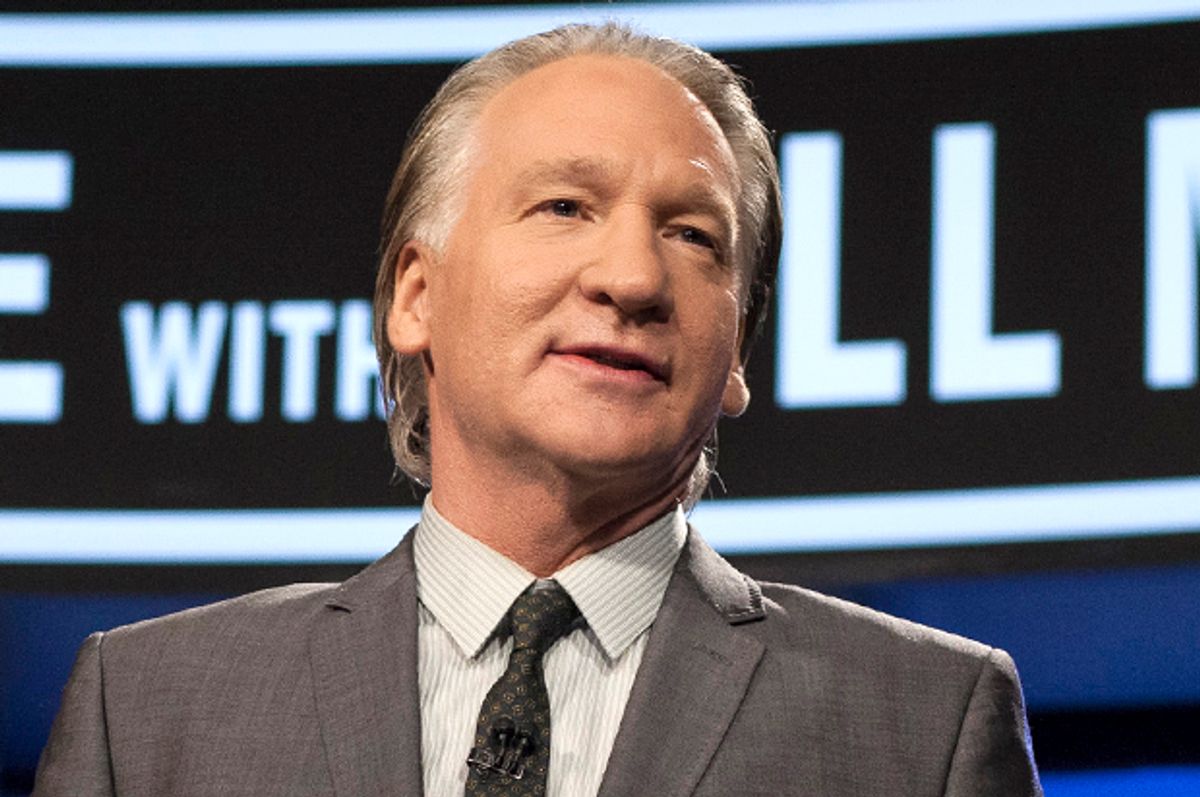 Indian author and activist Arundhati Roy once said, “There’s really no such thing as the ‘voiceless.' There are only the deliberately silenced, or the preferably unheard.”

Her words seem particularly apt this week in light of Bill Maher’s recent opening of the Islamophobic floodgates during his "Last Word" interview with Sam Harris and Ben Affleck. In the now infamous segment, Harris argues “Islam is the mother-lode of bad ideas” and that “We are misled to think the fundamentalists are the fringe.”

Muslim American academic Reza Aslan was subsequently called on by CNN to comment on Maher’s views, which he demurely dismissed, but what was most interesting was comparing the treatment of Aslan and Affleck, both voices arguing against anti-Muslim prejudice, by mainstream American TV anchors.

In his interview with CNN, Aslan, a professor of religion, was forced into an apologetic stance in which he sought to elicit a recognition that Muslims are diverse in their outlooks and beliefs, despite being persistently dismissed by both skeptical CNN interviewers.

The discussion subsequently continued without Aslan, his voice having largely been ignored until that point anyway, but what was telling was that his contribution was recast as a hostile and angry response by a third CNN presenter, Chris Cuomo: “His tone was angry. He wound up kind of demonstrating what people are fearful about when they think of the faith in the first place, which is the hostility of it.”

“Angry” is just another term used to invalidate someone’s position by attempting to root their arguments in emotion rather than rationality – it’s what men do to women in the “angry feminist” variation, and it’s what white people do to ethnic minorities (women especially, through the angry black woman stereotype). Cuomo was seeking to delegitimize Aslan’s perspective by making him appear as an extension of the irrational and angry faith the anchors had consistently upheld as the only valid perception of Islam.

Compare this dismissal of Aslan’s polite frustration with the response to Ben Affleck’s visceral anger and disgust at Maher’s original statements. “It’s gross and racist” Affleck retorted, his annoyance evident. But unlike Aslan, who’s subaltern identity meant he required approval from the anchors in order for his arguments to be given credence, Affleck’s white privilege allowed him to express a similar sentiment to Aslan in far cruder and more assertive terms, yet without being dismissed.

I was reminded in watching the clip of a statement by the activist Audre Lorde: “Black and Third world people are expected to educate white people as to our humanity.” Discussions involving Muslims begin with the assumption that Muslims must prove their humanity to a hostile audience, the same premise which requires Muslims with no connection to ISIL or violent jihadis to begin a campaign like “Not In My Name” so they can avoid guilt by association.

The debate has been framed as a discussion over the nature of liberalism but that is, frankly, to give Maher’s bigotry far too much credence.  Maher called Islam "the only religion that acts like the mafia, that will fucking kill you if you say the wrong thing," a statement which, when deconstructed, is a textbook illustration of bigotry.

For a start, religions don’t do or think anything – people articulate ideas or act in the name of religion; Affleck was spot-on when he queried whether Maher had somehow determined the “the codified doctrine of Islam." And he was even more accurate when he lambasted Maher’s attempt to play on white victimhood by casting himself, a highly influential TV host, as part of an oppressed group whose voice was somehow being suppressed on issues relating to Islam and Muslims -- all the while demonizing Islam and Muslims, largely unchallenged, on primetime Television.

This phony martyrdom is a classic example of what the writer Richard Seymour terms “white victimhood,” rebranding minorities as aggressors with the fictitious power to mimic the type of systemic discrimination actually experienced by those cast as outsiders. This attempt at “liberal victimhood” ultimately serves -- just like white victimhood serves to undermine anti-racist struggles -- as a way of delegitimizing the very real and enduring struggle against institutional racism and individual prejudice experienced every day by Muslims. ‎

TV hosts like Maher appear to revel in deliberately inviting debate with known moderate Muslim figures in order to seemingly undermine them, and thus simultaneously undermine the very notion of a moderate Islam.  There are no moderates, the common refrain goes; or as Maher himself stated on the show, “Its not a few bad apples”, implying that the net of suspicion should be cast on every Muslim who isn’t merely a “nominal Muslim.” (The thinking here being that the only good Muslim is one who doesn’t actually identify with their faith.)

The sheer recklessness of claiming that Muslims share "too much in common with ISIS," a violent guerrilla group which has incidentally beheaded far more Muslims than it has Americans, can hardly be overstated. There is an increasing and alarming consonance between the far-right discourse of Muslims -- that they are an existential threat out to destroy western civilization -- and the language spouted by Maher and others, who insist that it isn’t a minority, but the majority, of Muslims who represent a threat to liberal ideals. And this discourse isn’t happening in a vacuum. New York City public transit currently features a series of ads paid for by the polemicist Pamela Gellar, featuring the phrase, “Yesterday’s moderate is today’s headline,” above a picture from the beheading of James Foley. Meanwhile, the latest advertisement for TV series "Homeland" features Clare Danes as a blonde red-riding hood in what writer Laura Durkey describes as a “forest of faceless Muslim wolves.”

A consequence of this Islamophobia, and the ‎intellectual jousting over the place of Islam in Western societies, is that Muslims are facing increasingly tough conditions. According to NYPD figures, anti-Muslim hate crimes are up 143 percent since last year.

Just as minarets or face veils have become imbued with a significance ‎beyond that attributed to them by Muslims themselves, discrimination ‎against those bearing religious symbols becomes justified through the ‎fallacious reasoning that people have chosen to subscribe to those ideas, and thus are fair targets. But people don't choose the significance that ‎others attribute to their symbols -- especially when they themselves have so little access ‎to defining them for themselves. People don’t have a choice in the stereotypes and ‎assumptions people make on the basis of their skin color, nor do they have a ‎choice in the stereotypes concerning the symbols which people interpret ‎according to the dominant narrative of extremism and cultural ‎incompatibility. ‎To be Muslim in America today is to be first and foremost a walking signifier for other people’s prejudice -- regardless of how many credentials come after your name.

It is the height of civilizational arrogance to assume you understand a creed, the manifestation of which varies not only in transit from Asia to Africa via the Middle east and  Europe; but which also varies in its understanding even within nations and among peoples. And it is bigotry without bounds to suggest that those adherents of a faith -- a faith persistently maligned in the public sphere, with little to no ability to rectify its public perception -- are the ones wielding any power to redefine or even constrain American ideals.

American Muslims are literally being left out of the conversation over what it means to be American. When they are present, they are forced into justifying their own humanity in order to absolve their very presence in the debate. More typically, they are simply kept absent, a faceless monolith for Americans to cast their darkest prejudice upon, fuelled by a self-righteous notion that they are in fact the carriers of a superior moral ideal, under threat from the enemy within.

It is a telling indictment of our times that some of our most illustrious academics, who happen to be Muslim, should have to sit through the public humiliation of an interview in which their competency is questioned on the basis of their religious identity. In any conversation in which American values are being discussed, Islam is the image against which America constructs its own civility, the bogeyman against which to contrast American greatness and  American Muslims are the unwitting casualties of a struggle which persistently dismisses them as the unalterable “other.”