"Fury": Brad Pitt brings the macho back to WWII in this relentless battle flick 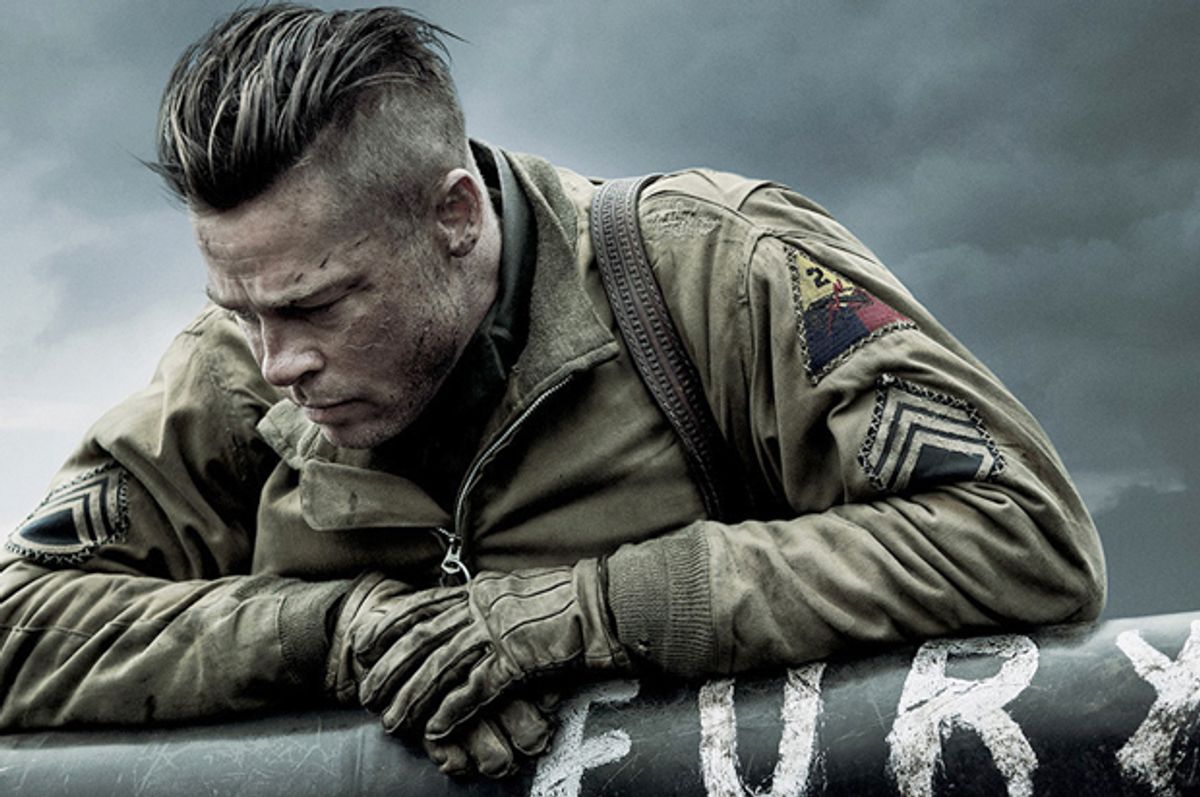 David Ayer, the writer and director of “Fury,” Brad Pitt’s new World War II tank-battle saga, is single-handedly trying to put the macho back into the movies. That sounds like I’m busting his chops, but it’s not entirely a bad thing. Ayer’s brand of cinemacho involves no CGI space-battles or robot superheroes; he appears uniquely interested in the long-neglected category of Movies for Your Dad, featuring hardboiled and morally conflicted heroes facing the final test of their moral fiber. If Ayer’s pictures all combine ultra-violence, tough-minded realism and masculine sentimentality, at least the blend is distinctive, and bears little or no resemblance to the teen-oriented action fantasies that dominate Hollywood production. He wrote two of the most relentless and memorable cop movies of recent years, “Training Day” and “End of Watch” (he also directed the latter), and with “Fury” he turns his intense focus to an even more neglected genre, and to the war that became the crucible of 20th-century American manhood.

Like Ayer’s cop flicks, “Fury” is a gripping ride all the way through, if somewhat restricted in its emotional and visual range. That fits well enough, since it seeks to capture the way decent or at least ordinary men can become lost in violent tasks and lose their connection to the outside world. "Fury" may be too narrow in focus, almost too minimalist, to be remembered as a great war film. (It reminds me, more than a little, of the insanely claustrophobic Israeli tank film “Lebanon.”) But if you get yourself past the star power and the marketing campaign and go see it, you won’t soon forget it. Ayer and cinematographer Roman Vasyanov gradually ratchet up the tension, as a tank crew led by hardened Sgt. Don “Wardaddy” Collier (Pitt) gets trapped behind enemy lines in Germany and must face a battalion of SS troops all by themselves – and then release it in a nearly ludicrous orgy of violence with a Peckinpah-scale body count.

That cartoonish conclusion, while excitingly staged, is a letdown in dramatic terms, because up to that point Ayer handles the story’s moral ambiguity with electrical precision. If Wardaddy sometimes comes off as the archetypal decent man in an indecent situation, he’s also a professional soldier, willing to brutalize a new recruit in the interests of survival and getting the job done. I’m not sure this movie or this role quite possesses the breadth necessary to win Pitt an Oscar (which is clearly one of its goals), but he gives a terrific performance, offering glimpses of other levels and depths within the man that are never revealed.

In the most obvious ways, “Fury” reaches back to the rousing, band-of-brothers tradition of ‘60s and ‘70s war movies like “The Big Red One” or “The Dirty Dozen,” but it also reflects, more than a little, the post-Vietnam shadow that fell across later films like “Platoon” and “Full Metal Jacket.” It has absolutely none of the ironic or rueful postmodern consciousness that afflicts most latter-day WWII flicks, from “Inglourious Basterds” to “The Monuments Men” and even “Saving Private Ryan.” Wardaddy and his guys don’t waste any time worrying about the rightness of their cause or bellyaching about the human costs of war; they’re fighting Hitler, after all. But Ayer’s a bit too smart to make a straightforward and uncomplicated tale of war heroism; this is more like a story that reminds you, without lecturing, that there’s no such thing and never was. These men are severely traumatized by what they’ve been through, even if they don't quite have the vocabulary to express it. Once out of sight of his men after a battle, the laconic Wardaddy drops to his knees to vomit. As gradually becomes all too clear, the line that separates American heroes from war criminals is almost too fine to perceive.

It’s the spring of 1945, and Allied troops are converging on Berlin from all directions. Everyone knows the war will be over within days or weeks, but Wardaddy’s tank platoon and a few other undersupplied fragments of the U.S. Army are trying to wipe up pockets of resistance across southern Germany. His crew are a deliberately stereotypical collection of army types: Shia LaBoeuf in a low-key, focused performance as “Bible,” the scripture-quoting born-again; Jon Bernthal as “Coon-Ass,” the debauched and dangerous good ol’ boy; and Michael Peña as “Gordo,” the bilingual Latino from the Southwest. Their longtime machine-gunner has been killed, and it falls to a raw draftee named Ellison (Logan Lerman), who trained as a clerk-typist, to clean what’s left of the former gunner out of the tank and take his seat. Ellison serves as our window into the world of the war, which he is eager to avoid or resist. When the other guys meet Ellison, at first they start guessing where he’s from, as in one of those classic war films. When he starts to answer the question, they tell him to shut up: They don’t actually give a crap. It falls to Wardaddy to break this kid, condition him to killing and earn him a “war name,” so they all have a chance to go home.

Many of the so-called soldiers still fighting on the German side at this late stage are teenage boys and men over 50, and early in the movie the pickings are pretty easy. Fury -- that’s the name painted on Wardaddy’s tank -- rolls through a succession of crossroads vehicles, encountering the corpses of locals suspected of disloyalty, hung from lampposts by the SS. When the Americans take a middle-sized town after a brief but intense battle, they seize the spoils of war in routine fashion: Whatever booze and food the retreating Germans have left behind – and the town’s women, with or without what we would now consider full adult consent. Wardaddy spots a penthouse apartment where two well-dressed female cousins, the remnants of local society, have holed up. He takes Ellison up there for a tense, tender, wrenching and emotionally violent scene that boils Ayer’s essential question into a few minutes: Can the contamination of war within one person, or one unit, be contained and controlled? Or does it always end by corrupting everything?

There was clearly more to Don Collier before he became Wardaddy, but Ayer never gives us more than a few hints. Collier speaks German (a lot better than Pitt’s character did in “Inglourious Basterds”), which comes in handy more than once, and drops a few comments that suggest a degree of worldliness and education beyond the Texas tough-guy act. “Ideals are peaceful,” he says to Ellison, “but history is violent.” By becoming Wardaddy, he has essentially agreed to surrender to that historical logic, to give up his individuality to a larger force. One can say that it’s pure accident that Wardaddy is fighting on the “right” side, just as a series of accidents strands the men of Fury in their broken-down tank, right in the path of one of the last surviving SS units, all too eager to die for the Fatherland. Who goes home a hero, who dies a martyr’s death and who gets ignominiously buried in the ruins of the Thousand-Year Reich? That too is a question for history.