It's okay if Amal Alamuddin is Mrs. Clooney now 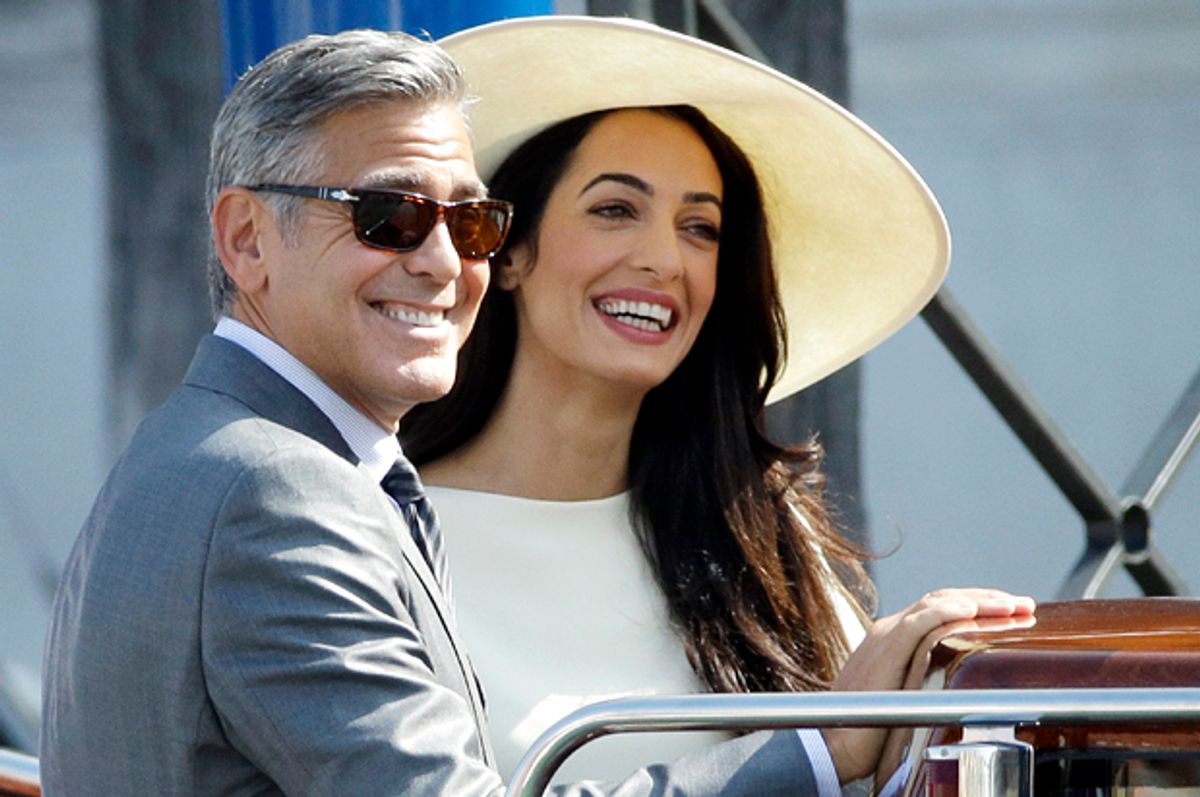 She's over the age of 35; she's built a thriving law career -- in fact, she's currently hard at work in the campaign to return the famed Elgin Marbles back to Greece -- and she's newly married. And if the woman who was until recently known as Amal Alamuddin would like to now be known as Mrs. Clooney, so be it.

Perhaps it was the fact that while in the real world, an impressive estimated 86% of American women take their husband's names, high profile females who marry are still usually presumed to go on with their maiden ones. Traditionally, even those those who call feminism a "negative word," like Marissa Mayer, have not transformed their names after marriage. And while self-proclaimed feminist Beyonce called her 2013 tour "The Mrs. Carter Show," it's worth noting that her husband Jay Z is legally Mr. Knowles-Carter, allegedly because the Knowles side was "keen to keep the name going strong." So when newlywed Amal Alamuddin's name quietly reappeared on her Doughty Street Chambers firm's site as Amal Clooney, it created a swift what-does-it-all-mean? sensation. CNN breathlessly mused whether she would be at least still be using Alamuddin as a middle name, while the Guardian reported that "Predictably, everyone is losing their minds," and then predictably, generated several hundred comments about it.

For the vast majority of heterosexually coupled population, the issue of what to do about last names isn't even an issue. Most women take their husband's names, and very few men take their wives'. For it to be a subject of conversation or debate at all is usually an indication of privilege, and with privilege comes lots of opinions. Writing last year in the Guardian, Jill Filipovic asked, "Why, in 2013, does getting married mean giving up the most basic marker of your identity?" At the other end of the spectrum, noted bad advice giver Steve Harvey has opined that "If you want to keep your last name you got, marry your daddy." These are your options, ladies, and whatever you do, you're wrong.

I was recently at an event where a fellow guest I knew only slightly hesitantly introduced my spouse by my last name. It wasn't a big deal for us to say that we don't share a name, but what surprised me was that the man then pressed me on the subject. "Well, why not? Isn't that confusing? Is it because your last name is so simple? What if your name was complicated, would you have taken his then?" Dude, what's it to you? At the same event, I hung out with a professionally successful friend who is newly married for the first time, at over the age of 50, and who changed her name to her husband's. And here's what I know – we're both fine.

The new Mrs. Clooney is a smart cookie. She's no brainless dupe of the patriarchy. I think it's a safe bet that her choices come from a place of thoughtful contemplation. There are compelling reasons to blend a family name and there are compelling ones to maintain nomenclature autonomy, and they aren't necessarily about surrendering one's identity. I wish that our culture was more encouraging and supportive, to both men and women, about how we approach these issues and how we can make the ones that feel right for each couple. But a married woman's last name doesn’t represent a declaration of her devotion or lack of it, or her intelligence or lack of it. It's a personal decision. And Amal Clooney is perfectly capable of making her own.