Is this a new way to lean in, or a hint to put off having children? 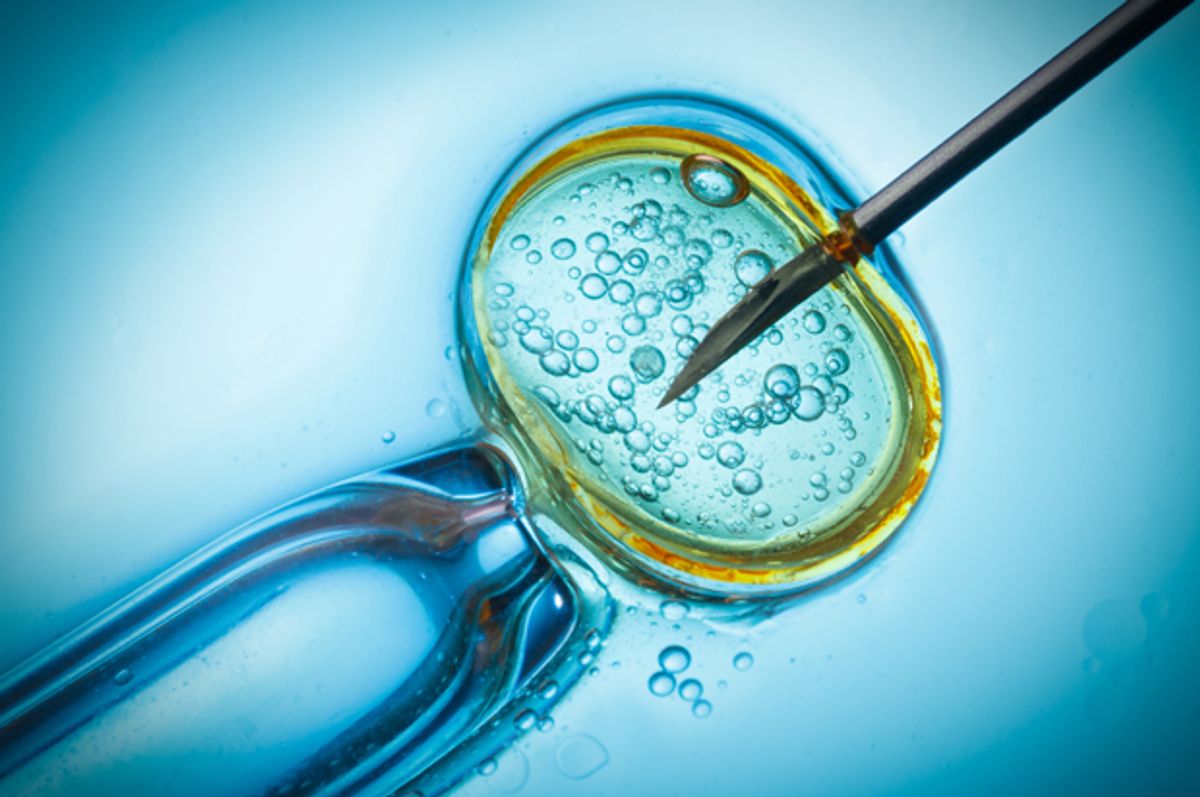 In an expansive gesture and hopeful sign for reproductive health, NBC reports Tuesday that both Facebook and Apple are now offering coverage for employees who wish to freeze their eggs. Facebook recently added the perk, and Apple plans on rolling it out starting in January. The news that the two giants "appear to be the first major employers to offer this coverage for non-medical reasons," represents a mostly welcome shift in the way that work and family are perceived in the workforce.

Egg freezing represents to women a kind of fertility insurance policy, an acknowledgment of possible future motherhood and also that life may also throw a few curveballs along the way. The stars don't always align to have the perfect moment to start a family or a perfect partner to do it with, and blissful fertility isn't always a guarantee for anybody. And the biological reality is that these are issues that women, whose childbearing years are finite, have to consider – especially as they're also trying to ascend in their careers.

As NBC's Danielle Freedman reports, egg freezing is an expensive process – "up to at least $10,000 for every round, plus $500 or more annually for storage." Though Apple and Facebook are offering their coverage under different employee benefit terms, the amount of coverage is the same – up to $20,000.

The tech world is currently actively, and often awkwardly, grappling with how to be more inclusive to women -- hey, remember just last week, when Microsoft CEO Satya Nadella addressed the wage gap by telling women, "It’s not really about asking for a raise, but knowing and having faith that the system will give you the right raise"? For two large companies to generously offer female workers the opportunity to explore more fertility options is a good thing, and it certainly goes a long way toward destigmatizing the often complicated issues around bringing babies into the world. Brigitte Adams, an "egg freezing advocate" and founder of Eggsurance.com, told NBC Tuesday that the new policies are "very forward-looking."

And yet, much like the burgeoning tech trend of offering workers vacations before they start their jobs, there's something about the idea of offering women assistance in freezing their eggs that hints of an implied deferral of childbearing. If your company has kindly given you the option, as a relatively young worker, of putting your baby-making plans on ice, would you be less inclined to jump the proverbial gun earlier? An April Bloomberg Businessweek story describes a "typical" egg freezer: "They’re great at their jobs, they make a ton of money, and they’ve followed all of Sheryl Sandberg’s advice." And it adds that "In a 2013 New York University study of 183 women who'd frozen their eggs, 19 percent said they might have had a child earlier if their workplace had been more flexible." But what does "flexible" really mean? Is it offering women better opportunities to put off having kids while in the most go-getter period of their lives?

What's telling and hopeful about the changes at Facebook and Apple is that they also come along with supportive parental leave packages. Facebook's has been called "one of the best maternity leave policies in Silicon Valley," with one of the longest leave times for both men and women, and for birth, surrogacy and adoption. Earlier just this month, Apple announced it has expanded its parental leave policy saying, "expectant mothers can take off up to four weeks before delivery and 14 weeks after, while expectant fathers and other non-birth parents can take a six-week leave."

That's what makes the new moves toward covering egg freezing even more positive and exciting – and with luck, exemplary to other businesses. They aren't just telling women that if they work for Facebook or Apple they will get financial coverage for freezing their eggs; they're making it clear to men and women alike that incorporating reasonable time off to have children – at any stage – is part of the corporate personality. That's a better way to lean in, for everybody.