"We hope they were duped": How prosecutors gave banks the best "penalty" ever

Wells Fargo engaged in awful, deceptive practices. For its sins, it engaged in a settlement that brought... profits 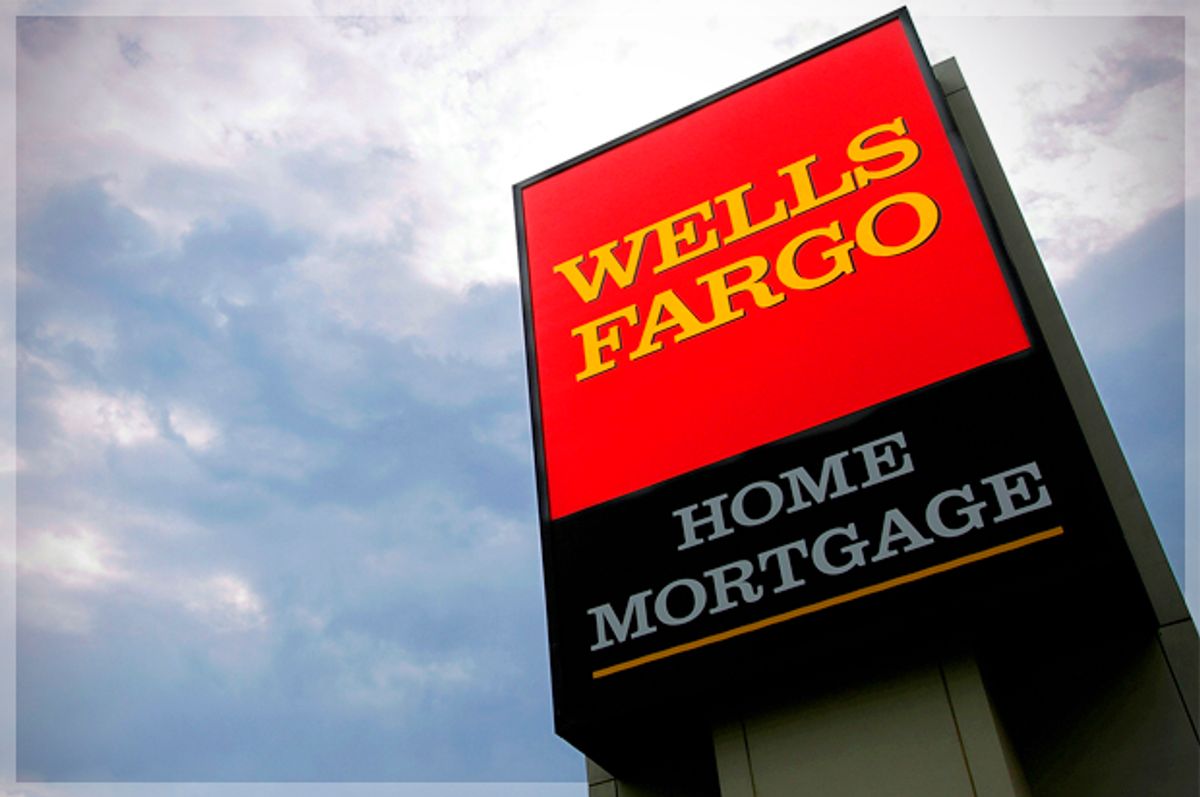 Defenders of Eric Holder’s legacy on financial crimes keep saying that, although we sent no bankers to jail for their tsunami of fraudulent behavior, at least we punished the parent companies in settlements, and forced them to compensate victims. I call it “settlement justice,” and it has become the template for how the perpetrators of white-collar crime get treated in America.

Usually, supporters of “settlement justice” tout the headline numbers ($37 billion!) and leave it at that. But it’s what happens after law enforcement signs the deal that matters. And one New Jersey lawyer’s detailed inquiry into a post-crisis settlement with Wells Fargo shows conclusively how banks wiggle out of their commitments, and why only prison cells can stop a Wall Street crime spree.

The story concerns the “Pick-a-Pay” loan program, one of the more toxic mortgage offerings during the housing bubble. These loans offered a variety of different initial payment options for borrowers to choose: a sum corresponding to a 15- or 30-year fixed rate loan, an interest-only payment, or a minimum payment that created “negative amortization,” where the principal balance would actually increase with each passing month.

Borrowers naturally trended toward choosing the lowest payment. But they were never told about the implications, and when the pay option expired, their monthly mortgage bill would skyrocket, usually leading to default.

These were not loans, but neutron bombs with a long fuse. And roughly half a million borrowers took these Pick-a-Pay loans under false pretenses from 2003-2008. Wachovia Bank and its subsidiaries sold the loans, but when Wells Fargo bought Wachovia at the end of 2008, they assumed responsibility for them.

Homeowners began to complain when the payments shot up, and law enforcement started investigating as well. Because Pick-a-Pay loans were designed to fail, and because Wachovia never disclosed the consequences, Wells Fargo was liable for violations of multiple consumer fraud statutes.

Between October and December, 2010, nine states (Arizona, California, Colorado, Florida, Illinois, Nevada, New Jersey, Texas and Washington) reached “assurances” with Wells Fargo to end their investigations in exchange for a deal. Under the agreements, Wells Fargo would offer eligible homeowners loan modifications. Wells Fargo also gave cash - $1.8 million to Washington, $33.8 million to California, $3.98 million to New Jersey – to compensate homeowners who already lost their homes. Homeowners would retain their right to sue Wells Fargo over the Pick-a-Pay loans, but they would get some measure of immediate relief.

Simultaneously, attorneys at the firm Berns Weiss were working on class action litigation against Wells Fargo over the same Pick-a-Pay loans. They eventually settled that case, In Re Wachovia, for $75 million. And Wells Fargo used that second settlement to pull a bait-and-switch on the nine states in the first settlement.

The two settlements looked similar: Pick-a-Pay loan customers would become eligible for loan modifications, and would get a cash award. But the class action settlement included a waiver of the homeowner’s right to sue Wells Fargo over the fraudulent loans.

Homeowners in those nine states were informed about a “new settlement” that gave them a bunch of new loan modification options (in reality, these options were the same as what they had from the old settlement). They also got a check for $178.04, which represented the $75 million, minus a whopping $25 million in attorney’s fees, distributed to half a million Pick-a-Pay customers across the country. By cashing that check, borrowers relinquished their future right to sue.

According to Wells Fargo, that included the right to defend themselves over future foreclosure actions on the properties, which the bank subsequently pursued. According to New Jersey attorney Joshua Denbeaux, who wrote a detailed report on Wells Fargo’s actions, “The strategy has been to pursue foreclosure at the earliest opportunity as aggressively as possible in order to force homeowners out.” While Denbeaux disputes that the class action settlement prevents homeowners from defending their homes from foreclosure, Wells Fargo has won several cases in court based on this theory, allowing them to basically steal homes for profit.

Getting tens of thousands of homeowners to deceptively sign away their rights for $178.04, and then rip off their homes, is bad enough, but it gets worse. Wells Fargo never complied with the minimal obligations in the class action settlement. They were supposed to offer loan modifications to every Pick-a-Pay loan customer who qualified. But according to Wells Fargo, the homeowners had to affirmatively apply for the loan modifications first, in order to trigger the bank’s obligations.

This is untrue; as Denbeaux points out, the settlement notice repeatedly says things like “you will automatically receive benefits if you qualify.” Wells Fargo relied on vague and contradictory language buried in the fine print of the settlement to make their claim.

By September 2012, Wells Fargo had only granted 1,746 loan modifications out of a pool of 500,000 potentially eligible customers. They denied over 64,000 others for a modification. The class action attorneys sued Wells Fargo for non-compliance, arguing that, in addition to pretending that the homeowner had to ask for the loan, Wells Fargo also inflated property values, falsified income information and engaged in other deceptions to deny homeowners loan modifications for which they qualified under the settlement.

After a year of legal wrangling, the judge in the case acknowledged last September that Wells Fargo’s justifications for their actions were “misleading and unreliable.” But he added that his court “could not devote much time to this case anymore.” The case is being reassigned to a new judge.

Remember that Wells Fargo had to offer modifications because these homeowners were abused by predatory lending. As “punishment,” Wells Fargo purchased these same homeowners’ due process rights for $178, and then stiffed them on the loan modifications to which they were entitled. Attorney Josh Denbeaux calls it “a seemingly endless cycle of misleading, deceptive and exploitative practices, in response to (Wells Fargo’s) misleading, deceptive and exploitative practices.”

Denbeaux has made each of the nine Attorneys General aware of his findings, asking them to re-open their investigations. None of the AGs have responded. Denbeaux is working with the activists at New Jersey Communities United for a responsible solution to this mess. “(Wells Fargo) signed a settlement with nine state attorneys general which they had no intention of honoring,” Denbeaux said. “For everyone’s sake we hope that (the AGs) were duped, because the alternative would be unthinkable.”

There are so many troubling pieces to this story. You have class action attorneys taking one-third of the settlement money for themselves, and failing to protect homeowners from waiving their rights. You have state Attorneys General looking the other way while their settlement agreements get invalidated. And you have Wells Fargo examining every comma and period to find a way to squirm out of paying up to homeowners who they wronged.

But most of all, this case is a damming indictment of the concept of “settlement justice.” When law enforcement reaches agreement with a bank on a settlement, for the bank that’s clearly the beginning and not the end of the story. As we see with Wells Fargo, they will continue to fight to limit their losses, and law enforcement will take little or no action in response. If it wasn’t for an inquisitive defense attorney, we wouldn’t know the extent of the abuses here.

And the Wells Fargo case is only one example. In the year since the Justice Department made a ballyhooed “$13 billion” mortgage settlement with JPMorgan Chase, only 2,633 borrowers received principal reductions on their loans. JPMorgan has satisfied the majority of the “consumer relief” in that settlement by making loans to low- and moderate-income borrowers. In other words, JPMorgan profits off their “penalty.” This is like sentencing a shoplifter to opening a lemonade stand.

That’s why there’s no substitute for exacting justice on the perpetrators of the crimes directly, so everybody knows such conduct will not be tolerated. “Settlement justice” does not work, not for the criminals, not for the victims, and not for the safety of the financial system from future frauds.