Cornel West was right all along: Why America needs a moment of clarity now

It’s sad that it's come to this. But social justice in America is officially stunted -- and there's only one answer 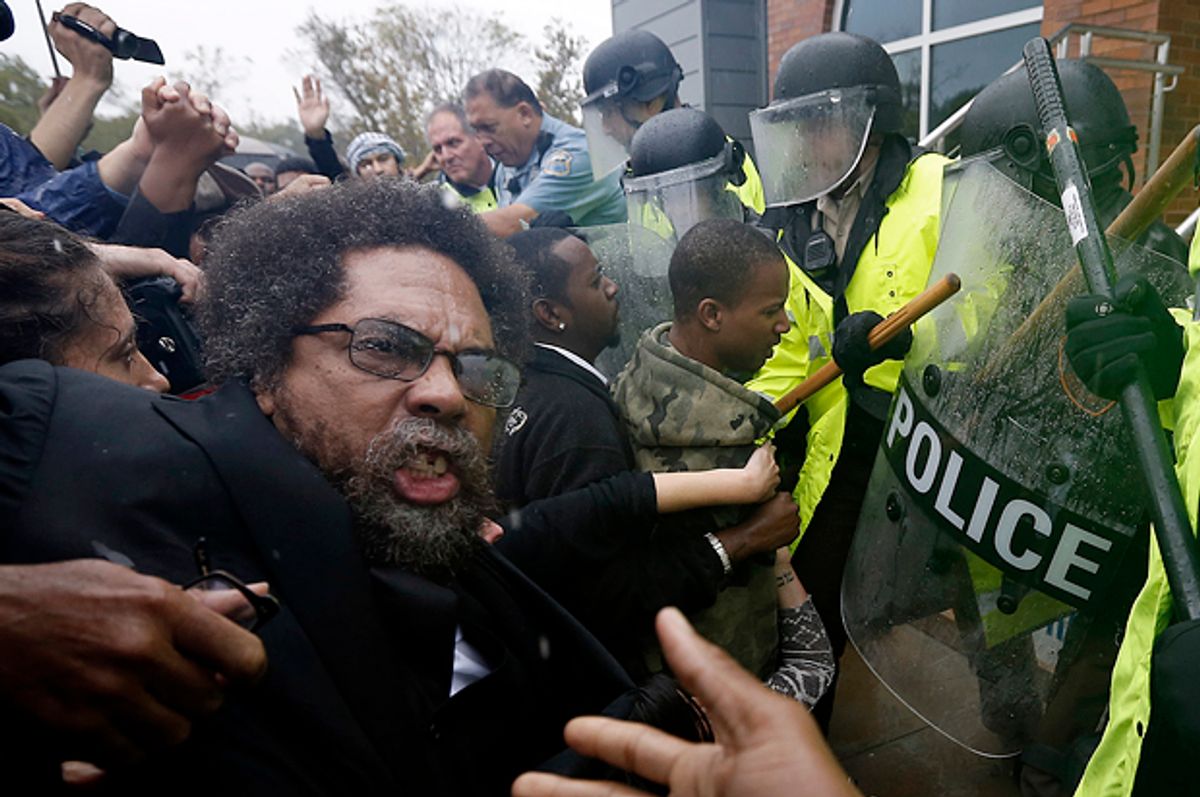 This past weekend, protestors and activists, including students, clergy, and concerned citizens descended on Ferguson, Missouri, for a weekend of marches, protests, sit-ins, and civil disobedience billed Ferguson October. Yesterday as one activist, Patrisse Cullors-Brignac, an organizer with Black Lives Matter tweeted exultantly from the inside of a St. Louis County jail cell about having taken over a Wal-Mart, I waited to hear news of her safe release alongside rapper-activist Tef Poe, attorney and legal observer Justin Hansford, and Palestinian activist Bassem Masri, who handled live streaming for the Organization for Black Struggle.

Of course, many on Twitter, could not understand why disturbing the peace in a private business should be acceptable. The point is – we are no longer standing for business as usual. Lest we forget, racial segregation of old happened in “private” businesses, too, in stores like Woolworth’s and Hecht’s. That John Crawford could not step into a Beaver Creek, Ohio Wal-Mart, wander aimlessly, as so many of us have done on a casual shopping trip, and reasonably expect to come out alive, suggests that time is out for business as usual.

This nation proclaims Black America backwards, sees us as stuck in the past, declares that our obsession with race –not racism itself – is holding back progress. But really, Black people are the hands on our national clock, controlling the timing of America’s social progress. This time both hands are up, pointing straight to the sky. It is high noon in America. It is the deepest midnight in our hearts.  But, “from the darkness cometh the light,” Lucy A. Delaney proclaimed in the title of her 1891 autobiography. Until those hands move, no longer held hostage by a state-issued weapon, nobody is going anywhere.

Biblical platitudes don’t go far with this crowd, but I’m reminded of a verse: “it is high time to awake out of sleep. (Romans 13:11)”

In college, some youth government leaders used this verse with the slogan, “The Awakening. Don’t sleep.” These days, young folks have remixed it, proclaiming “stay woke.” I am sitting with what it means that we have moved from “Don’t Sleep to Stay Woke.”

For we have awakened from a long, fitful slumber. Lulled there by our parents and grandparents, who marched in Selma, sat down in Greensboro, matriculated at Black colleges, and argued before the Supreme Court, they convinced us to adopt their freedom dreams, impressed them into our bodies, in every hug, in every $25 check pressed into a hand from a grandmother to a grandchild on his or her way to bigger and better, in every whispered prayer, in every indignity suffered silently but resolutely in the workplace.

We slept so long our dreams have become nightmares.

Langston Hughes famously asked, “what happens to a dream deferred?

Does it dry up

Or crust and sugar over—

Or does it explode?

This Ferguson October, young people are on the ground dreaming new dreams, and in so doing, they are inspiring elders. They are creative, taking over public spaces, not only with signs, and chants, but with impromptu games of twister and double-dutch. From them we learn that play can be political, that there is joy in struggle, that there is no justice without pleasure.

They are lining up, linking arms, and being locked up for justice. They are listening to those who have something to say, and shutting down shit when forced to listen to anyone who doesn’t. They are choosing their leaders, their griots, their truth-tellers, their strategists, their elders.  Showing up matters most. Putting one’s body on the line is the order of the day. They are undignified, improper, unabashed, impolitic, unapologetic, indefatigable.

This weekend they took over four Wal-Marts, in solidarity with John Crawford who was murdered in an Ohio Wal-Mart. There, prosecutors have cleared officers of wrongdoing. Protestors took signs to the St. Louis Rams game, and confronted angry fans who yelled, “I am Darren Wilson.” Two weeks ago, they disrupted the symphony. Exploding dreams cause disruptions. They should be expected to continue.

More than 3000 new registered voters move among them (Update: This number has since been revised downward to 128). They have collected these new registrations like so many arrows in a quiver. Still they remain skeptical of the vote. And since the presence of Black faces at the voting booth scares white people they should be.  Take Tef Poe’s surly response to Senator Claire McCaskill at a PBS townhall in late September. She argued that we needed new pipelines of local African American leadership. He replied, “I voted for Barack Obama twice, and still got tear-gassed.”

We could mince words about the vast differences and expansive power of local governments in these matters, over against the apparently limited power of federal jurisdiction. But that’s kind of beside the point. Movements are as much about symbols as about substance. And Barack Obama is a broken symbol, a clanging cymbal, unable to say and do anything of use. His silence is the sound of imploding dreams, his words mere distractions and detours from the future we want.

He has become a prime example that being the leader of the free world in a Black body is still no match for entrenched, local, systemic, committed racism.  It’s sad that it has come to this.  But this is bigger than Barack Obama. Just like it was bigger than King and his dream. We have awakened from sleep. We have been startled out of it by nearly 30 gunshots ringing out insistently from the heart of America. Jay-Z might call it “a moment of clarity.” In Obama's place, Cornel West has re-emerged, the wise and fearless elder, the one who we tried not to listen to, as he screamed into the wind for six years, the one whose approach chafed my hide on more than a few occasions, the one who is -- despite all of our collective quibbles and begrudgements – right.

Don’t sleep. Millennials, it seems, are the ones we have been waiting for.  Fearless and focused, the future they are fighting for is one I want. It is high time to awake out of sleep. Stay woke.