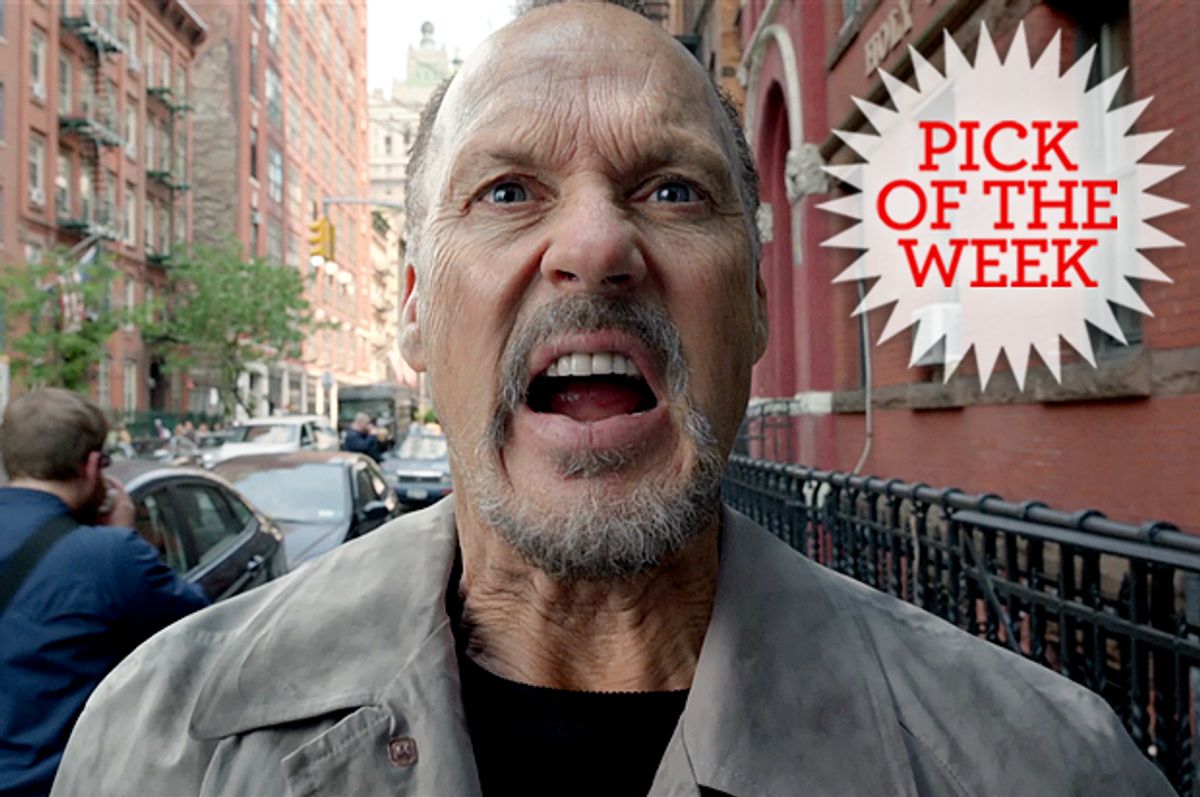 In the opening scene of Alejandro González Iñárritu’s unhinged and passionate tour de force “Birdman,” we see Michael Keaton, wearing nothing but a pair of tighty-whitey briefs, sitting in the lotus position and levitating four feet above the floor of his dressing room. It’s not the last time we’ll see Keaton, playing a fallen Hollywood star named Riggan Thompson who is trying to make a comeback in an ambitious Broadway play, in his underwear. Riggan becomes a “viral sensation” later in “Birdman” -- more famous than at any time since his run as the star of the eponymous superhero franchise, two decades earlier – thanks to a nightmarish episode where he gets locked out of his own theater and must weave his way through the tourist-packed streets of Times Square similarly attired. It’s also not the last time we’ll see him defy the laws of physics, which Iñárritu sees (I’m afraid) as a metaphor for what artists do all the time, even those as conflicted and compromised as Riggan.

In some ways “Birdman” seems like a major departure for Iñárritu, the immensely talented and too often achingly earnest director of “Biutiful” and “Babel” and “21 Grams.” (And of course his blistering debut film, "Amores Perros," still the best thing he's ever done.) It’s an overtly comic film, an exaggerated backstage satire made entirely in English and shot on location in New York. Riggan’s dramatic adaptation of Raymond Carver’s “What We Talk About When We Talk About Love” – an intentionally dreadful idea – is staged in and around the real St. James Theatre on 44th Street, a legendary Broadway house that has hosted major theatrical premieres from “Oklahoma!” to “Tommy” to “American Idiot.” But beneath its arch, farcical and fanciful surface, its accelerated dialogue and its amped-up showbiz characters, “Birdman” is still an Iñárritu film. It’s a quasi-religious fable about a man haunted by the past and facing a profound moral and existential crisis in the present, and it’s a dazzling display of virtuoso cinematic technique and showboat performances. In structural and moral terms, in fact, it tells almost exactly the same story as “Biutiful,” which starred Javier Bardem as a divorced, dying Barcelona dad with a terrible secret, and wasn’t funny at all.

What all the crackle and hilarity and daredevil, Scorsese-style long takes down corridors, around corners, up staircases and across rooftops add up to I’m honestly not sure. Let me mention Martin Scorsese again just to make sure you get the point. To make this movie, it feels like Iñárritu and ace cinematographer Emmanuel Lubezki cooked “Taxi Driver,” “After Hours” and “The King of Comedy” down into crystals of crack cocaine and smoked them up, before downing a few shots distilled from Fellini’s “8-1/2.” For most of the way – let’s say nearly all the way – the ride in “Birdman” is so thrilling you’ll never wonder what the point is, because the ride itself is the point. This movie has Zach Galifianakis totally killing it in a role Zach Galifianakis would never play, as Riggan’s uptight and neatly styled manager. It has Emma Stone and Edward Norton playing “Truth or Dare” on a rooftop overlooking Times Square. It features an all-percussion score improvised by drummer Antonio Sanchez – who occasionally appears in the film, playing along – and a homeless man offering a distinctive reading of the “Tomorrow and tomorrow and tomorrow” monologue from “Macbeth.”

No one can watch this movie and not feel the genuine struggle, and genuine excitement, within it. Of course it’s no accident that the tormented central character is played by a 63-year-old actor who once, eons ago in Hollywood time, wore the cape and mask of the most iconic superhero of all. But if Michael Keaton displays a fervent intensity and emotional range here that he never got close to showing before, during or after his Batman stardom, “Birdman” is not Keaton's story, or his cri de coeur. Written in a group collaboration by Iñárritu, Nicolás Giacobone, Alexander Dinelaris and Armando Bo, “Birdman” is both an indictment of the Hollywood production machine and a self-indictment of the vanity and narcissism so often found in those who try to resist it. Iñárritu is not kidding even a little bit about the argument that superhero films are fascistic and soul-destroying. At the same time, he feels himself being sucked in, just as noble warriors of old were corrupted by the One Ring. I half-suspect he made this movie to inoculate himself against their immense commercial and cultural allure, and to make studios stop sending him those scripts. (It won’t necessarily work.)

From the preening, bad-boy method actor hilariously played by Edward Norton to the embittered, martini-swilling New York Times critic played by Lindsay Duncan, Riggan is surrounded by people eager to tell him he’s a worthless hack. Duncan is more like a caricature of a mean-spirited and judgmental critic than the real thing, but that’s because most theater critics in the real world would be slavishly eager to wash the feet of a slumming Hollywood celeb. Riggan also has his adult daughter, Sam (Emma Stone), who is just out of rehab, his semi-forgiving ex-wife, Sylvia (Amy Ryan), and his younger girlfriend and on-stage co-star, Laura (Andrea Riseborough), to remind him that his personal life is a disaster. At the same time, Riggan is driven on by the voice of Birdman, his onetime alter ego, assuring him that his true destiny is greatness far beyond these pretentious theater losers, and that billion-dollar worldwide grosses can once again be his. At least, at first Birdman is just a voice; if you’ve seen any promotional material for this movie it’s no spoiler to say that ultimately he makes a spectacular personal appearance to drive his point home.

Most of the fun in “Birdman” is basic cinematic pleasure, the fun of pinballing around the St. James with Riggan as he bounces off his cast, his family members and his support staff without quite registering them as human beings. If Stone, Galifianakis and especially Norton – playing precisely the kind of egomaniacal and unpredictable great actor that Ed Norton is presumed to be – make the biggest impression, Riseborough, Ryan and Naomi Watts (as a character actor finally getting her Broadway break) also get showcase moments. It is never even remotely convincing that the Carver short story in question could be turned into a Broadway show, not even by someone with Riggan’s evident personality disorder, and the more we see of this godawful play the more uncomfortable it becomes. Like: Are these really the two alternatives left in our culture, Michael Keaton in a bad wig doing imitation Eugene O’Neill, or ever more arcane and pseudo-operatic effluvia of the Marvel and DC universes? If I had to choose between them at gunpoint, I might ask for the gun.

As for the plot twist or the double reversal or whatever it is that comes toward the end of the film, I’m dying to debate that but of course I won’t, except to say that it’s completely misguided and makes “Birdman” feel like an immensely ambitious gimmick that finally crashes to earth. I think the movie is far more interesting, more daring and more deeply confused than its dopey magic-realist escape valve. It is a work devoured by its own ambition, consumed by the very thing it vilifies. It’s obvious Oscar bait – a mid-budget showbiz satire, loaded with stars – that decries the Oscar process, in the words of Hunter’s critic character, as a bunch of vain and empty people giving each other awards for cartoons and pornography. (That’s not something an actual critic would ever say: Oscar movies are often terrible, but not in that precise way.) It’s a work of sparkling, witty entertainment that yearns to soar above all such things, even though its hero and its creator both know how the Icarus story ends.

“Birdman” is now playing in New York and Los Angeles, with national release to follow.