Yeah, the GOP is evil and will win -- but the midterms are meaningless

It's the Party of Fear's turn this year, and that blows. But the cast of clowns in D.C. don't really run the show 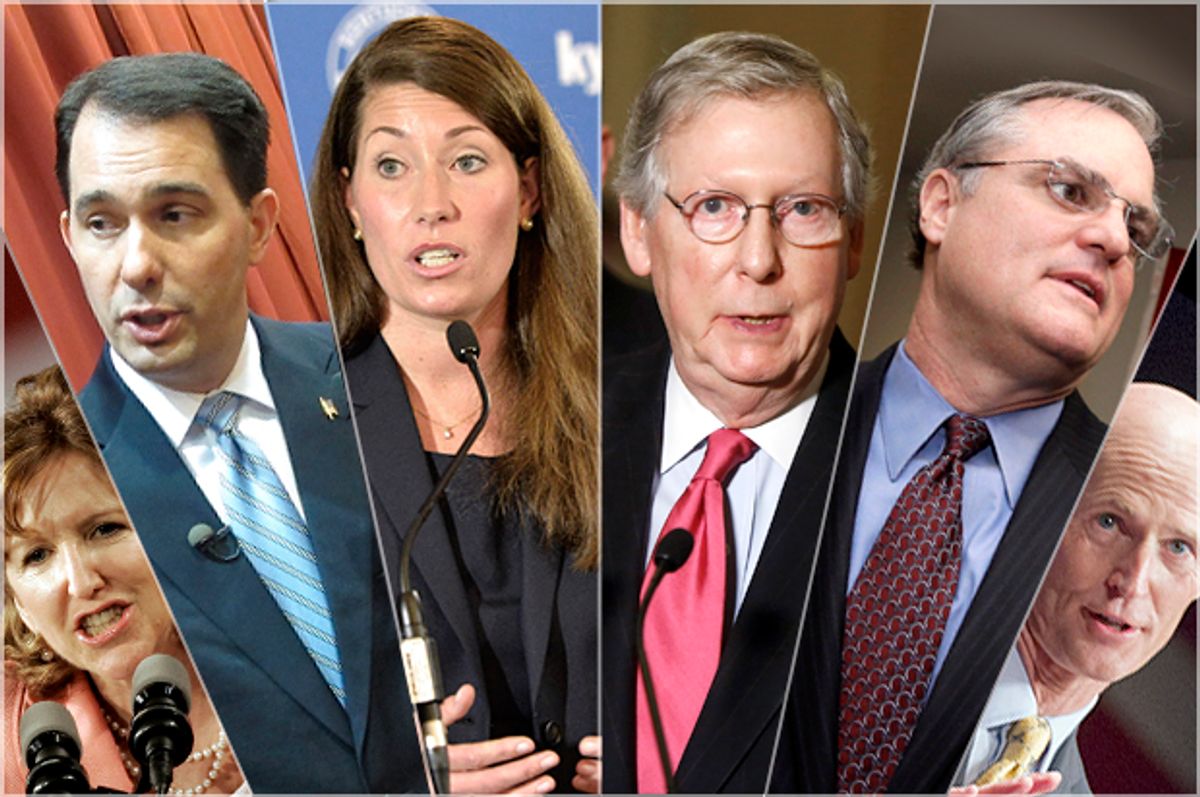 A few weeks ago in this space, I brought up an apparent contradiction at the heart of American government, in current theory and practice. Barack Obama occupies the White House in an era of extreme and perhaps unprecedented executive power, a species of elected king who can spy on anyone in the world, order the killing of American citizens without due process and wage secret wars by remote control. Yet in terms of conventional Washington politics, he “can’t get anything done.” The legislative branch has been paralyzed since the middle of his first term, and political discourse has grown ever more toxic. His own party has no clear mission or agenda beyond being less pathological than the opposition party, whose appeal rests largely on racial panic, xenophobia and anti-government paranoia, and whose only visible agenda is obstructionism.

It should be obvious to everyone who isn’t a profoundly deluded partisan loyalist that nothing that could possibly happen in the 2014 midterm elections will change any of that. Indeed, it is obvious to most people, which is why most people won’t bother to vote on Nov. 4. It’s Political Punditry 101 to view widespread public apathy as both cause and symptom of a diseased political culture, and that’s at least partly true. But declining to participate in an empty ritual that changes nothing is an entirely rational response, arguably more clear-eyed and realistic than investing it with meaning it does not possess. I wholeheartedly agree with my colleague Joan Walsh when she describes American politics in 2014 as “an endless feedback loop of futility: little or no policy change leads to a discouraged electorate, which ensures little or no policy change, which guarantees more voter apathy.” But I would further describe that as political reality slowly unveiling itself -- “little or no policy change” is a key feature of our system, not a bug -- and I do not share Joan’s glass-half-full optimism that pumping up Democratic turnout, or somehow saving the Democrats’ Senate majority, can do anything to correct that.

Another factor in midterm apathy, although I don’t think it’s the most profound, lies in the fact that recent electoral politics have followed a cyclical and almost meteorological pattern. Despite the obvious fact that the pendulum will soon swing back the other way, we all have to pretend, at least momentarily, to believe that each incoming rainstorm or high-pressure front represents a permanent change in the weather. This year’s twist in the “Groundhog Day” plot of American politics was scripted long in advance. The big Obama-led Democratic sweep of 2008 came after eight years of Bush, six years of an increasingly unpopular war and a catastrophic economic crash. That Kenyan-Muslim Afrocentric coup was answered by the rise of the Tea Party in the “angry white man” backlash of 2010 -- and after both of those elections we endured endless punditry about how this new political force was a world-conquering game-changer whose ascendancy would last forever.

Apparently Republicans really are either stupid or insane, since they seemed surprised to learn that their rightward lurch into an all-white, anti-everything party of fear was a big loser in the 2012 presidential election. They promised to lick their wounds and think hard about immigration and "the Latino vote," but that did not prove to be necessary, since they now find themselves in another midterm election with a bunch of spineless purple-state Democrats on the defensive and an electorate of “highly motivated” base voters, meaning the old, the frightened and the deeply Caucasian. Ebola and ISIS are pretty much the perfect issues for a GOP midterm victory: They’re scary things from scary foreign places that we don’t really understand and can’t do much about; they call forth alarmist rhetoric and the prospect of wasting lots of money in the name of national security. (All this was manna from heaven for Republican strategists, because Benghazi and Obamacare had pretty much stopped paying dividends.)

Democrats can take comfort, of sorts, in Hillary Clinton’s status as the odds-on presidential favorite, and in the fact that the GOP will have to defend a bunch of vulnerable Senate seats during the 2016 cycle. Republicans have won the popular vote in exactly one of the last six presidential elections, and right now they have no obvious candidate who seems likely to reverse that trend. You don’t have to have Nate Silver’s computer chops to place your bets in Vegas: Democrats will lose their Senate majority this year, get it back in 2016 and lose it again two years after that.

But that forecast, however depressingly accurate, is not the point. The horse-race analysis or pop sociology that views each of those shifts as momentous -- driving a bazillion think-pieces and unreadable political-science tomes -- only serves to conceal an underlying stasis: the politics of no change, the politics of permanent government, the politics of a neoliberal, pro-corporate economic policy and a national security state, both of which are enthusiastically supported by both parties and their funders, and almost never debated in public. (In different ways and to varying degrees, potential 2016 candidates Rand Paul and Elizabeth Warren deviate from the orthodoxy of the “Washington consensus,” which is exactly why the mainstream political caste views them as dangerous outriders.)

Just to be clear, I’m not urging anyone not to vote this year, especially not in states or districts where the race is close. Every situation is different, and so is each individual’s moral calculus on this question. I’m not claiming there is some higher ground in a “great refusal.” If I lived in Kentucky or Georgia or wherever, I’d probably vote too. I’m also not arguing that there’s no difference between the two political parties, since that’s manifestly untrue, or that the current version of Capitol Hill paralysis won’t look like Periclean Athens compared to the theater of hate we’ll see come January. Purely on grounds of Schadenfreude, it would be delightful to see an odious and corrupt insect like Mitch McConnell defeated by a Democratic woman. It almost certainly won’t happen, and if it did the Democratic woman would turn out to be a corporate shill who refused to vote against the NRA or the third Iraq war or the “black budget,” while McConnell dried his tears with a $10 million gig on K Street. Still, I understand the appeal.

But I’m also not going to serve as an adjunct of the Democratic Party’s get-out-the-vote campaign when it manifestly doesn’t matter, in larger historical terms, what happens in the midterm election. Nothing meaningful happened in the last Congress and nothing meaningful will happen in the next one, regardless of whether McConnell or Harry Reid sits in the majority leader’s chair. That contradiction I mentioned at the outset, between the immense might of the imperial presidency and the poisonous mire of Washington politics, requires us to understand where real power lies in the United States. The president is a powerful figure, no doubt, as are the leaders of the House and Senate. But those people come and go and are not necessarily the most important factors in the equation. At least nominally, they command and oversee the enormous underlying structure of permanent government known as the “deep state.” But it precedes them and outlasts them, and as the Edward Snowden NSA revelations and numerous other data points ought to tell us, the question of who really holds the reins of state power is debatable, at the very least.

The concept of the deep state has a variety of overlapping meanings, and a long heritage within historical and political analyses of famously top-heavy states like Turkey and Egypt, where powerful entrenched bureaucracies have subverted democracy or ignored it altogether. In the current American context, journalists Marc Ambinder and D.B. Grady have used it to designate the far-reaching national security apparatus that was expanded so dramatically after 9/11. In an influential essay published earlier this year (which helps explain why the Obama administration is sliding toward another Middle East war), former congressional aide Mike Lofgren uses it to signify something much larger, “a hybrid entity of public and private institutions ruling the country according to consistent patterns in season and out,” comprising not just the federal bureaucracy and the intelligence agencies, but also the bankers and corporate elites.

If we were voting for or against candidates who were willing to address the power of the deep state, or at least to disclose and discuss it openly, then the midterm elections might mean something. As things stand, American electoral politics looks a lot like the circus staged to keep the kids entertained while the grownups pave over the fields and run the railroad through the middle of town. Can you blame the kids if they’re getting bored of watching the same clowns jamming themselves in and out of the same Volkswagen?