We shouldn't need an "undo" for body modifications

The new boom in cosmetic surgery is earlobe repair 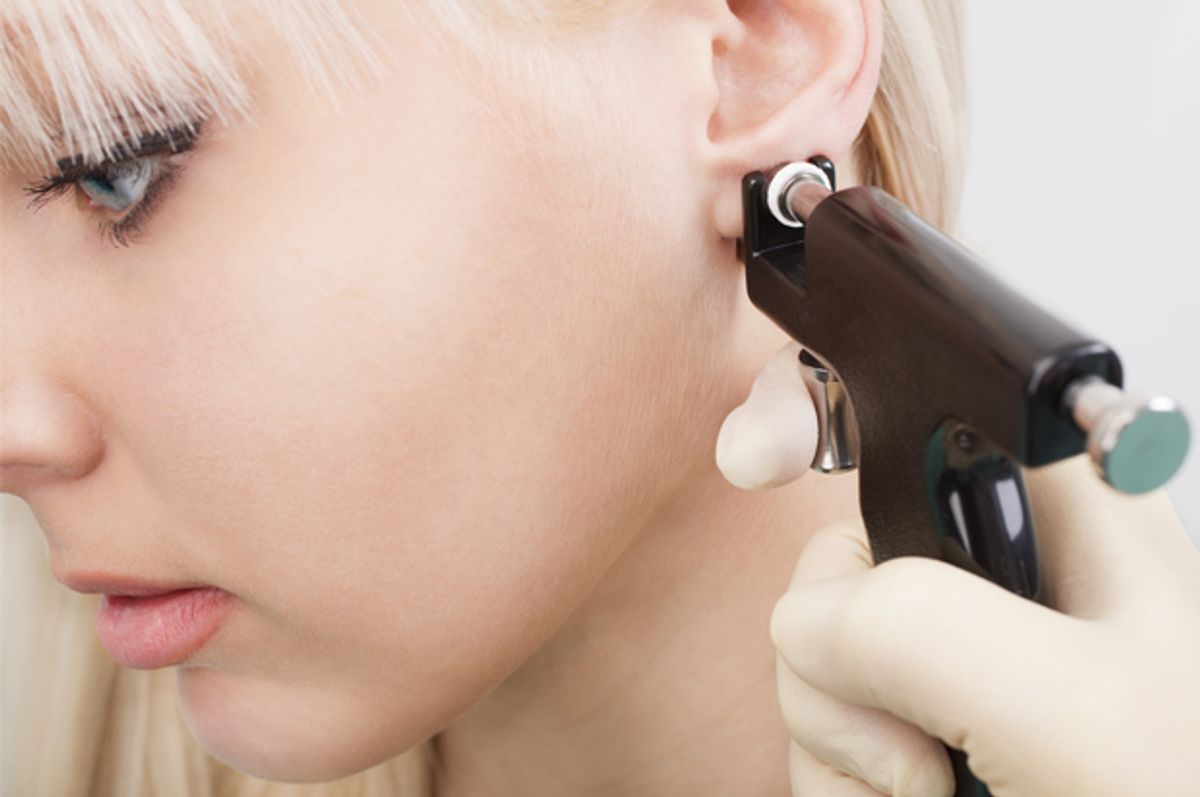 Remember when your grandma regarded your new look quizzically and gently asked if you weren't worried you'd regret that choice someday, and you felt like a boss because, no, stick it to the man? Now, maybe you're regretting it. As Nicole Mowbray notes in the Guardian this week, "One of the fastest-growing cosmetic procedures in the UK is repairing stretched earlobes."

The procedure, "pioneered" by surgeon Adrian Richards, has been a hit with individuals who now need to present a more conservative appearance for their careers. Richards cites a golfer who wasn't permitted into the PGA with stretched earlobes, and a soldier who said his commanding officer told him that "Anyone with ear tunnels of over 2cm would have to have them repaired, or there was a threat of discharge." Writing a year ago for CNN, Dr. Anthony Youn similarly reported that "There is one body modification trend I've been asked very commonly to repair: gauge earrings." And he tactfully advised, "So if you're considering extreme body modification, think about it very seriously."

In many cultures, a body mod like ear tunneling is a rite of passage and a social signifier. In places like the UK and US, however, it's more likely to be a personal statement. And while a big gesture -- especially one like tunneling that requires time and patience -- can be an important ritual when you're young, a way of declaring a desire to distinguish yourself and to identify other members of your tribe, doing so potentially also puts one at risk. Risk in the moment of a botched procedure, and risk for the future of having a permanent reminder of that particular era in life, long after it has passed. And maybe the 40 year-old version of yourself won't be so crazy about what the 20 year-old version has done.

Every generation finds its own ways of standing out. My mother's got laughed at for naming their kids Rainbow and Starchild – although now, half the kids in my children's schools are named Rainbow. I spent my teens during an era of mohawks and safety pins, and my youth in San Francisco in the nineties, a place and time in which body modification was a perpetual game of one upsmanship. If you didn't have a bridge piercing or a split tongue, you were pretty much a known vanilla quantity. And while most people I know who have serious body mods obtained theirs after careful thought and a fairly scrupulous vetting process, let me tell you from up close experience: We're all in our forties now and not all of it has aged well. All I'm saying is -- learn from us and our scars, kids.

It's fortunate that we live in a time in which there's increasing tolerance for people who look and dress to their own beat. Just this week, Starbucks made the radical gesture of permitting employees to have their tattoos exposed at work – as long as they're not on their necks or faces – and "moderately sized" piercings. Not everybody will want to someday go work in an office. Not every gesture leads to regret. We don't all travel down the same paths and we all should be able to express ourselves in a manner that makes us feel most glorious. But it's also good to remember that at some point, we may want to change our appearance again – and going to a doctor to undo the previous work costs a whole lot more than getting it done in the first place.