The "Patient Zero" of online humiliation offers her experience, but little advice 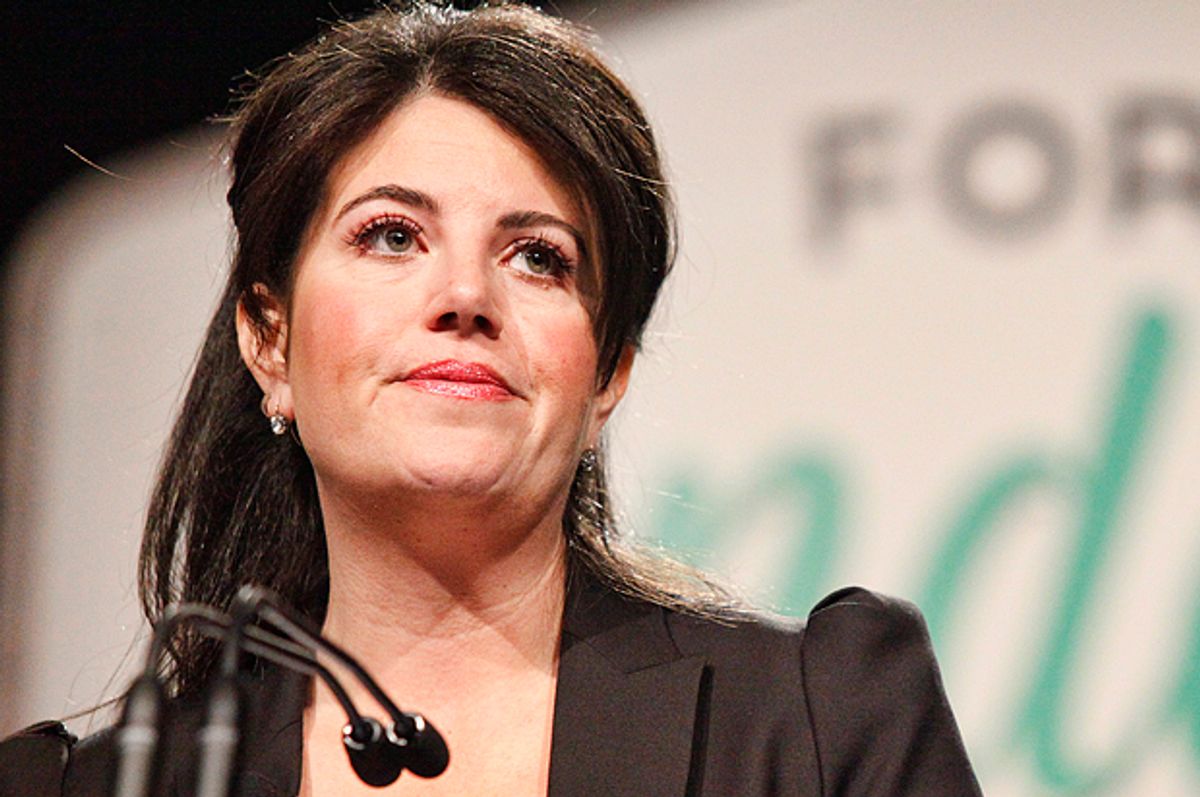 I'd like to say that Monica Lewinsky chose a particularly apt moment to launch her mission to end cyberbullying. When she announced her Twitter presence Monday, it was during a still explosive debate over the way women in the gaming world are harassed – and less than a week after Anita Sarkeesian's USU event was canceled after threats of a "massacre." It was in the midst of ongoing problems over how sites like Twitter and Facebook respond to hate speech and threats, a moment that feels in many ways a tipping point in our understanding of the depth of troll culture. Just two weeks ago, Kathy Sierra, whose experience of being doxxed, harassed and abused online is pretty much the gold standard of everything terrible in online culture, wrote, "You must be stopped. And if they cannot stop you, they can at least ruin your quality of life." But the truth is that the day Monica Lewinsky got online was a pretty typical day for the trolls and their targets. This is the often poisonous water in which we all swim. The question now is whether she can accomplish anything to change it.

Lewinsky's rollout of her new persona – champion of the cyberbullied – has been a slow build. In May, she appeared in Vanity Fair, looking glamorous and vowing to "get involved with efforts on behalf of victims of online humiliation and harassment and to start speaking on this topic in public forums." Then on Monday, one of the most notorious figures in modern American politics addressed Forbes' 30 Under 30 Summit in Philadelphia, admitting, "If I seem nervous, forgive me, because I am." And she did.

Lewinsky now sees herself as the "Patient Zero" of online humiliation, "The first person to have their reputation completely destroyed worldwide via the Internet." She certainly has struggled with the fallout from the poor choices she made in her early twenties. She continues to be defined by and derided for who she was a generation ago -- evidenced on Twitter Monday with a vast sea of predictable, gross oral sex jokes lobbed in her direction.

At 41, Monica Lewinsky is still clearly grappling with the question of what she's supposed to do with her life. (Remember when she was designing handbags, the go-to declared career for women who don't have careers?) During her Forbes address Monday, she often seemed awkward and unsure. Her Twitter feed thus far consists of three posts, two of which are composed entirely of hashtags. And while she definitely has spent her adult life being mocked and shamed, her self-aggrandizing depiction of herself as "Patient Zero" ignores that the Internet was around a long time before she put on that blue dress, helping ruin countless other lives along the way before Drudge came along.

Is Monica Lewinsky the best person to lead the very daunting charge against bullying and harassment? She's still a woman finding her own voice. She says, "What we really need is a cultural revolution" but she doesn't yet seem to have any solid thoughts on what that would look like or how to bring it about. She doesn't seem to have given much thought yet to the practical issues of online moderation and social leadership.

But whatever one may think about her reckless behavior over a decade and a half ago or her vague gestures now, there's no arguing that when it comes to having, as she puts it, "unimaginably intimate details of my life" disseminated and judged and made fun of, she's got cred galore. She knows what it is to "go online, read in a paper or see on TV people referring to me as: tramp, slut, whore, tart, bimbo, floozy, even spy." And as she relates, depressingly similar things are happening right now, to celebrities whose privacy has been invaded, to regular people who've had the  theirs likewise taken from them, to teens who are shamed and mocked and bullied. What happened to Monica Lewinsky didn't create that. It's been there all along, as many of us who can recall the free-for-all that Usenet was twenty years ago, especially if you dared to identify as a female. If she'd never existed, the trolls still would. But Monica Lewinsky is nonetheless undoubtedly part of the story – she's part of it historically, and based on the response so far to her Twitter feed, she continues to be part of today. And she's making a choice now, to imperfectly attempt to be part of the dialogue, to offer up her own experience of being shamed as moral lesson to others and a plea to do better. So welcome to social media, Monica Lewinsky. It's an often brutal place for many of us. You're going to need that "block" feature a lot. You probably can't fix that and you definitely can't do it alone. But you can be part of the effort to make it better, and for that, we're glad to have you aboard.