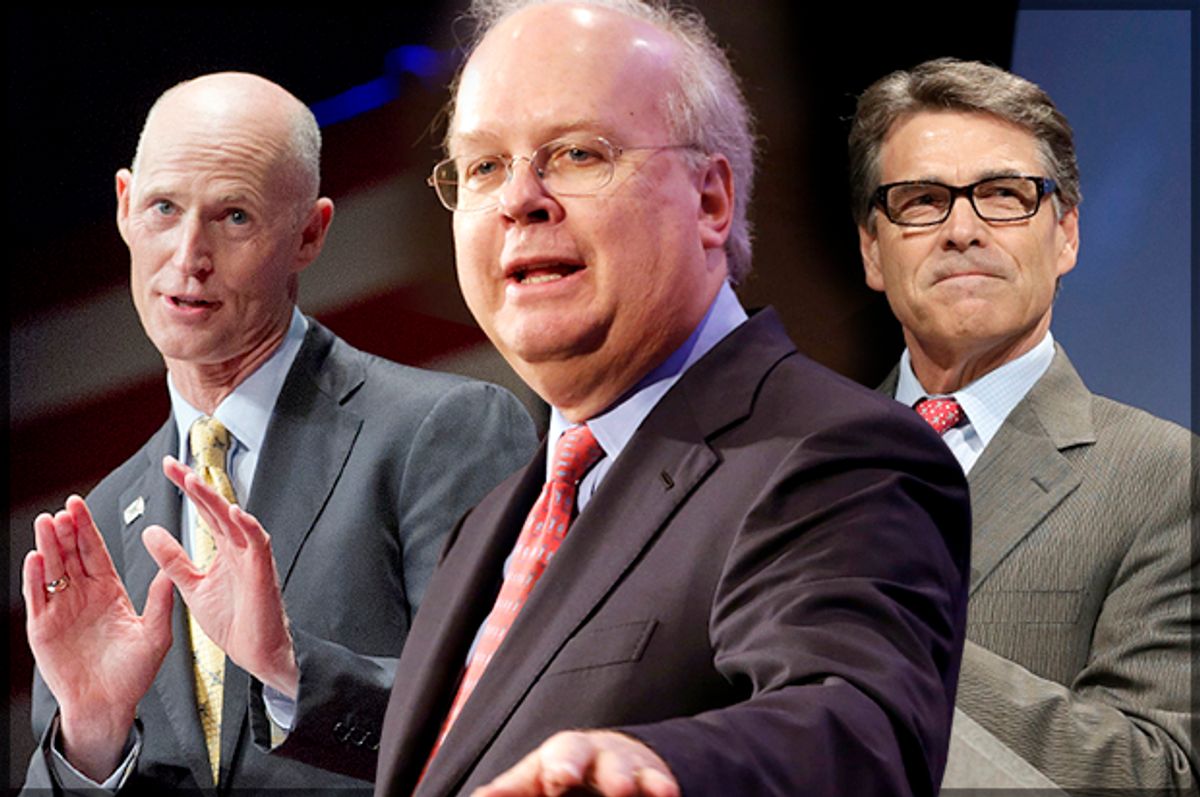 Last week, the Supreme Court upheld a law that could disenfranchise 600,000 Texans. But the effects of the law won’t fall equally: African-Americans and Latinos are 305 percent and 195 percent less likely (respectively) to have the necessary forms of identification than whites. The Republican party is increasingly unpopular, and relies almost exclusively on white voters. The charts below show the 2008 if only white men voted and if only people of color voted (source).

Since 2008, people of color become a growing share of the voting population while the GOP has, if anything, moved further to the right. It has further alienated voters of color with racist attacks and laws. But as they say: if you can’t beat ‘em, make sure they don’t vote. Over the last four years the Republicans have gone through elaborate attempts to make sure populations that don’t support them don’t get a chance to vote.

Since 2006, Republicans have pushed through voter ID laws in 34 states.  Such laws did not exist before 2006, when Indiana passed the first voter ID law. The laws were ostensibly aimed at preventing voter fraud, but a News21 investigation finds only 2,068 instance of alleged fraud since 2000 (that is out of over 146 million voters). They estimate that there is one accusation of voter fraud for every 15 million voters. As Mother Jones notes, instances of voter fraud are more rare than UFO sightings. There have been only 13 instances of in-person voter fraud (the sorts that a voter ID law would reduce), while 47,000 people claim to have seen a UFO.

On the other hand, research by the Brennan Center for Justice finds that, “as many as 11 percent of eligible voters do not have government-issued photo ID.” Those who do not have ID are most likely to be “ seniors, people of color, people with disabilities, low-income voters, and students” -- i.e.. people who vote Democratic (chart source). There is now a large literature studying the effects of voter ID laws. James Avery and Mark Peffley find, “states with restrictive voter registration laws are much more likely to be biased toward upper-class turnout.” The GAO finds that voter ID laws reduce turnout among those between ages 18-23 and African-Americans (two key Democratic constituencies). A 2013 study finds that the proposal and passage of voter ID laws are “highly partisan, strategic, and racialized affairs.” They write, “Our findings confirm that Democrats are justified in their concern that restrictive voter legislation takes aim along racial lines with strategic partisan intent.” [Italics in original] The authors also find that increases in low-income voter turnout triggered voter ID laws. A more recent study finds, “where elections are competitive, the furtherance of restrictive voter ID laws is a means of maintaining Republican support while curtailing Democratic electoral gains.” That is, not all Republican legislatures propose voter ID laws -- only those that face strong competition from Democrats. If Republicans are concerned about election integrity, why do they only pass voter ID laws when they’re about to lose an election? Because they’re cheaters.

Voter ID laws are also racially motivated. A recent study finds that voters are significantly more likely to support a voter ID law when they are shown pictures of black people voting than when shown white people voting. One voter ID group had a picture on their website showing a black inmate voting and a man wearing a mariachi outfit -- clearly playing off racial stereotypes.

But this isn’t the only time Republicans have tried to leverage state-level advantages into federal gains. After the 2010 walloping, Republicans decided they would need to tilt the odds in their favor. Using their control of state legislatures, they gerrymandered districts to ensure their victory. In 2012, Democrats actually had a larger share of the popular vote for the House of Representatives, while Republicans gained their largest House majority in 60 years. Cook Political Report noted, “House GOP Won 49 Percent of Votes, 54 Percent of Seats.” How? They cheated. Karl Rove came out and said it in an Op-Ed, writing, “He who controls redistricting can control Congress.” They won in districts that were drawn specifically to allow them to win. There were certainly other factors at play, but it’s hard to image Republicans winning as many seats without their nifty swindle.

As Tim Dickinson points out, this isn’t the end:

In a project with the explicit blessing of Republican National Committee Chairman Reince Priebus, a half-dozen Republican-dominated legislatures in states that swing blue in presidential elections have advanced proposals to abandon the winner-take-all standard in the Electoral College...Thanks to the GOP's gerrymandering, such a change would all but guarantee that a Democratic presidential candidate in a big, diverse state like Michigan would lose the split of electoral votes even if he or she won in a popular landslide.

If Republicans have their way, we’ll eventually be back to the days of the poll tax and the literacy test, where the votes of blacks, youth and the poor simply don’t count. We’re already halfway there. The Senate, with its antiquated system of two senators per state means that the largely rural, old, white and conservative Midwest and South have far more sway than liberal metropolitan areas. This gives Republicans a strong advantage in the Senate, something to remember if they win it this election.

Republicans have also made use of felony disenfranchisement to boost their electoral success. Some 5.85 million Americans are denied the vote due to felony disenfranchisement. Because of the racial bias in our criminal justice system and the war on drugs, a disproportionate share of these voters are black. One study finds that because felons are more likely to be poor and people of color, disenfranchisement benefits Republicans. The authors estimate that, “at least one Republican presidential victory would have been reversed if former felons had been allowed to vote.” Further, they find that such laws may have impacted control of the Senate, and even more state and local elections. It’s no surprise that in Florida, a state where 10 percent of voters can’t vote because of a felony conviction, one of Rick Scott’s first moves as governor was to tighten rules for felons trying to gain voting rights.

To a large extent, the radicalism of the Tea Party and the Republican Party at-large is due to the fact that they don’t represent the population at large; they represent a primarily white and middle- to high-income voting bloc. And that’s how Republicans want to keep it; they know they can’t win in fair race, so like Dick Dasterdly and Muttley, they set all sorts of obstacles in their opponents' way. Hopefully, much like Dick Dasterdly and Muttley, their plan will blow up in their faces: Voters will be so angry about Republican attempts to suppress the vote that they’ll turn out in even higher numbers. Sadly, convicted felons, undocumented immigrants and many citizens without ID will still be denied the vote. In the movies, cheaters never win, for Republicans it’s been a successful electoral strategy for three decades running.