At age 83, a '60s legend breaks new ground with a wistful, spectacular voyage into love and philosophy -- in 3-D! 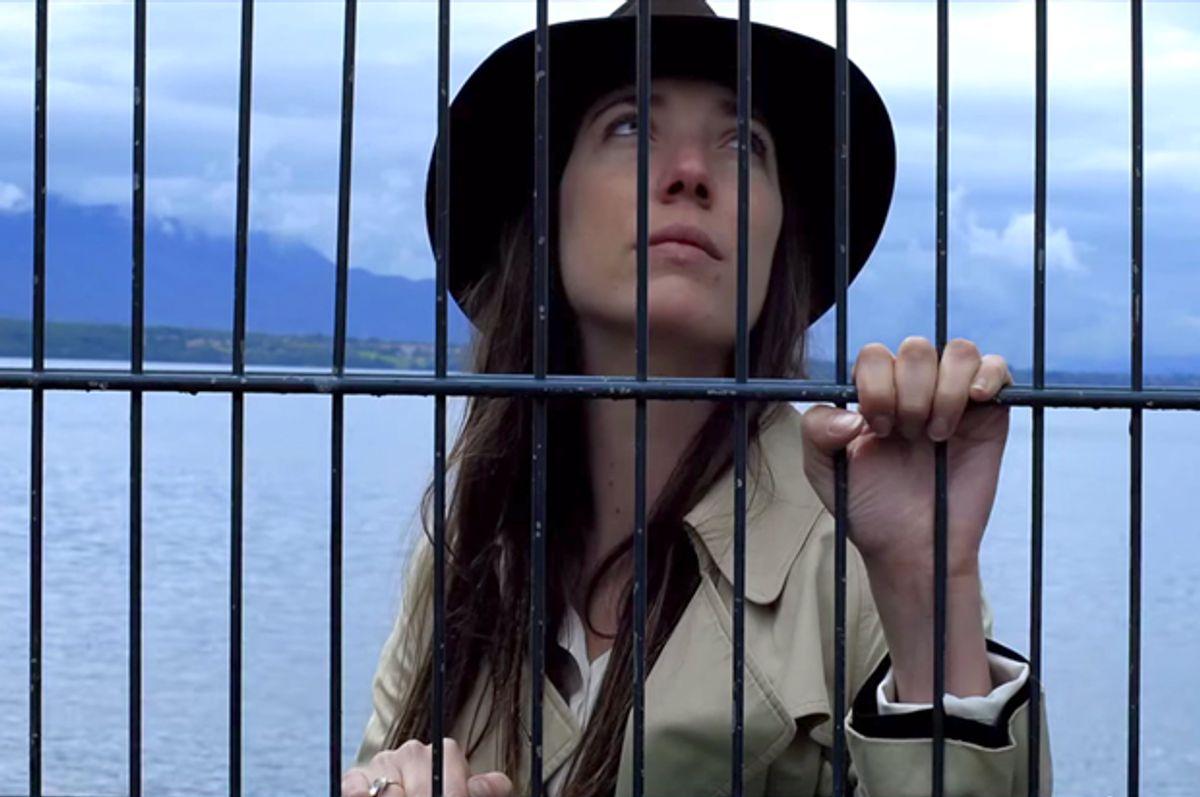 I sat through Jean-Luc Godard’s remarkable 3-D film “Goodbye to Language” directly in front of a New York daily newspaper critic who was nearly driven crazy by exasperation. He sighed and rustled and slouched and put on his coat and took it off and left and came back. At first I felt resentful about the constant mutter of distraction, but “Goodbye to Language” is no ordinary moviegoing experience, and it ultimately dawned on me that being in the same physical space with this guy who hated it from first moment to last was an irreplaceable part of my experience. His noisy suffering was as much a part of the soundtrack as the chorus of overlapping quotations from literature and philosophy, or the snippets of baroque, classical and modern music.

That person’s reaction will not be unique, to say the least, and Godard is very much aware of that. You have to cast aside preconceptions about movies being entertaining, or at least about what you think that means, in order to enjoy “Goodbye to Language,” and that’s not possible for everybody. In a certain perverse sense Godard might be delighted with my tormented Philistine, because that person illustrates a point Godard was trying to make (accepting for the moment that he has a point to make) about the kinds of attentiveness and focus we have lost, and about the cultural totalitarianism that makes even the tiny, marginal art-zone he has inhabited for decades no longer sustainable.

That said, if you can abandon yourself to the brain-sizzling, endlessly evocative and sometimes goofy aural-visual groove of “Goodbye to Language,” it’s nowhere near as “difficult” as most of Godard’s later work. It joins the very short list of intriguing experiments in 21st-century 3-D, which otherwise comprises Werner Herzog’s “Cave of Forgotten Dreams” and Wim Wenders’ “Pina.” I enjoyed this movie more thoroughly, and more liberated from frustration and ambivalence, than anything Godard has made in at least 20 years. It provided me with an interpretive frame that may even lead me back to another crack at “Notre Musique” (2004) and “For Ever Mozart” (1996) and most of all the extraordinary 1988-1998 video documentary series “Histoire(s) du cinéma.”

I’m tempted to say that “Goodbye to Language” brings together two cultural phenomena that cannot be explained and that may not be useful: an 83-year-old cinematic legend and 3-D technology. If that sounds like the opening line of a gag, you’re on the right track: One of the most obscurantist and least commercial of all famous filmmakers, an artist who has deliberately turned his back on narrative and on any sense of connection with a popular audience, has made a movie in the medium preferred by James Cameron and the makers of superhero epics. But Godard’s 3-D movie, unsurprisingly, is not like anybody else’s, and if it’s a joke to some extent, it’s a deep and elaborate one full of switchbacks, with a punch line we can’t understand.

In adopting the technology that was supposed to rescue Hollywood from obsolescence, is Godard mocking us for our eagerness to be seduced by illusion – for our desperation to cling to hollow dreams – or is he discovering undreamt-of new possibilities within those constructed illusions? I’m not sure even he knows the answer, or believes it’s a valid question. You can only understand Godard’s work, from his breakthrough films of the French New Wave more than half a century ago to today, in terms of paradox and contradiction. No, let me rephrase that – there is no “understanding” Godard’s work, and no point trying. But we can surround it or frame it in some ways, and I feel pretty sure that the conventional view, which is that once upon a time he made films ordinary viewers could connect to and take pleasure from, like “Breathless” and “Contempt” and “Band of Outsiders,” and for the last 40 years or so he’s been engaged in a series of arid and incomprehensible experiments, is totally useless. I’m not saying you can’t hold that opinion about his later work; there’s a lot of it I don’t particularly want to watch either. But I also feel confident Godard sees no such distinction in his work, and believes he has been engaged in the same search – call it the search to embody or transcend or defeat meaning – all along, by one means or another.

Even attempting to review one of Godard’s films, and especially this one, makes you aware of all the rhetorical dodges and prevarication and psychological defense mechanisms involved in film criticism. So here we go with a yes-but, both-and construction that is clearly a cop-out. “Goodbye to Language” is a spectacular, mesmerizing work of art, one that distills all the essayistic, collage and palimpsest tendencies of Godard’s later work into a spellbinding and unpredictable 70-minute journey. Fabrice Aragno’s 3-D cinematography includes some dazzling and disorienting effects I’ve never seen outside of art-gallery installations, notably a few moments when the 3-D image separates into two distinct images that flow apart from each other – both stereoscopic, but no longer connected in space – and then rejoin as the two people in the scene approach each other again. There are also magnificent contemplative images of natural settings with an intensity and clarity rarely seen outside the masterworks of Japanese cinema, augmented by the hallucinatory deep focus of 3-D: the bough of a pine tree, autumn leaves floating in a limpid pool.

At the same time, “Goodbye to Language” also recycles a whole range of familiar Godardian obsessions, including a heterosexual marriage in a state of terminal decay, a compulsive and almost juvenile fascination with Hitler and the Holocaust, and a bewildering range of overlapping or contradictory quotations from literature and philosophy. Much of that material is fascinating in itself, and I scrambled to get some fragments into my notebook in hopes I could track them down later. Who wrote the strangely prescient essay about “Hitler’s second victory,” the idea that in defeat the Nazis sowed seeds that would lead to the demise of democracy? (OK, that one I tracked down: the French Christian anarchist Jacques Ellul, in 1945.) Then there are the Keystone Kops gags involving Mercedes-driving Germans who show up to interrupt the angst of our tortured central couple with gunfire (and untranslated dialogue), the recurring episodes of scatology – the husband observes that shit is the only true area of human equality – and the dog. A pert-eared shepherd mix called Roxy, Godard’s actual dog, is the star of the show, gallivanting through the 3-D woods untroubled by all the internal and external conflict that weighs upon the human beings.

We could certainly dive into the “text” of the film and try to unpack it. Is Godard reconsidering spirituality by quoting religious authors like Ellul and Dostoevsky and Aleksandr Solzhenitsyn, or offering an apologetic counterweight to his wide-eyed embrace of Maoism in the late ‘60s? Those are intriguing questions, but I think you’re better off treating “Goodbye to Language” as a meditative experience, where we identify issues like that as they flow past and then let them go. Godard’s title seems both ironic and descriptive; he remains as fascinated with language and thought as ever, and this film is dense with talk. (Only some of that is subtitled, but the anti-Anglophone sentiment is not as intense as in Godard’s 2010 “Film socialisme,” with its notorious “Navajo subtitles.”) But he’s not sure any of that gets us anywhere, in movies or life.

If we can experience the world of this movie, its smeared nightscapes and painful conversations and naked bodies and sight gags and heartbreaking natural beauty and Parisian street vendors hawking tattered paperbacks no one wants anymore, with the alertness and attention and unconcern that Roxy brings to every moment, then we understand as much as we need to. Whether this movie adds up to anything, whether the 3-D experiment was worth doing, and whether the irascible maverick who declined to show up for his own Oscar (to absolutely no one’s surprise) intends it as a final testament are questions I can’t answer. But he’s furiously alive right now, and taking no prisoners. And his dog is adorable.

“Goodbye to Language” opens this week at the IFC Center and the Elinor Bunin Munroe Film Center in New York. It plays Nov. 7-8 at the Walker Art Center in Minneapolis, Nov. 9 at the Virginia Film Festival in Charlottesville, Nov. 13 at the Cinematheque in Madison, Wis., Nov. 14-20 at the Rafael Film Center in San Rafael, Calif., Nov. 14-21 at the Black Film Center in Bloomington, Ind., Nov. 18-19 at the Cleveland Cinematheque and Nov. 20-21 at the Wexner Center in Columbus, Ohio, with more cities and dates to follow.