"Nightcrawler": Jake Gyllenhaal knows what you want to watch

In a dark fable of TV news as nightmare, Gyllenhaal plays a late-night gore-hunter who creates his own stories 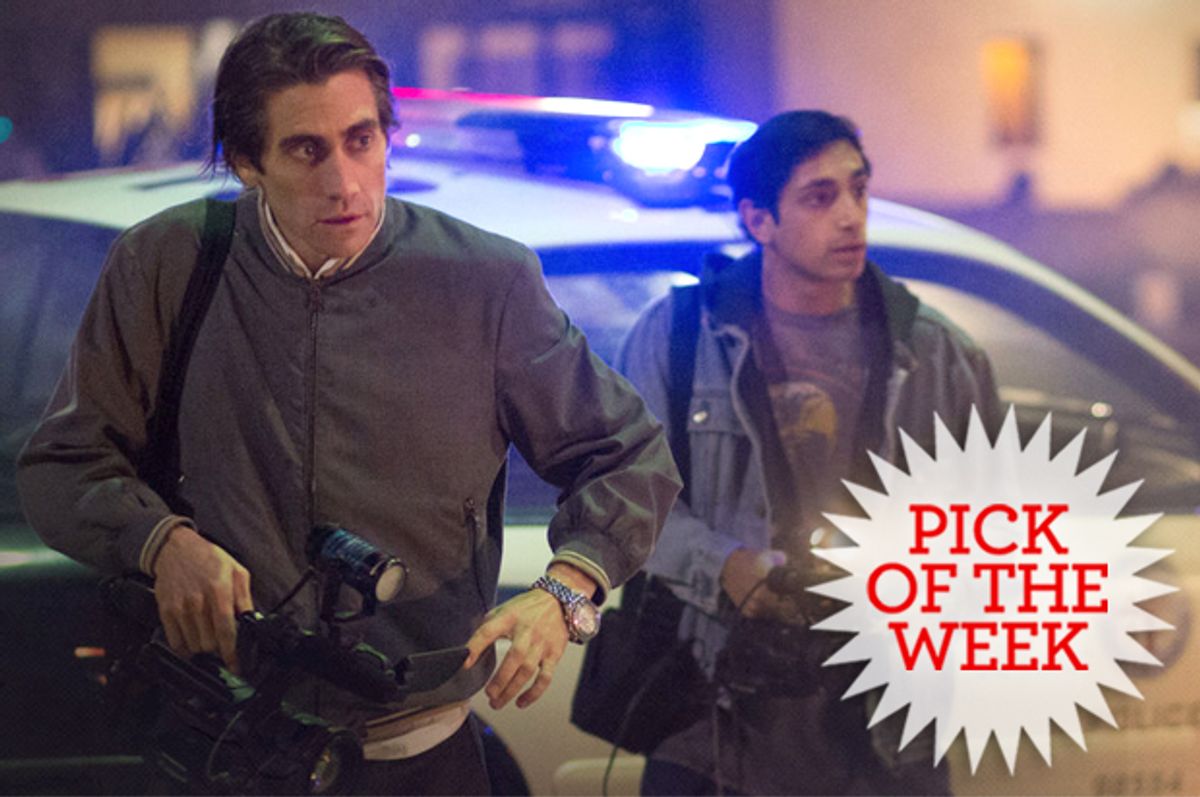 “Nightcrawler,” the aptly titled directing debut of veteran Hollywood screenwriter Dan Gilroy, may be a little too sleazy and knowing for its own good. After watching Jake Gyllenhaal’s intense and unsettling performance as a sociopathic TV news cameraman chasing the most gruesome late-night stories across Los Angeles, you may need a shower, a Valium and a triple shot of whiskey, without feeling entirely sure you want to wake up the next day. But while “Nightcrawler” plays first and foremost as a lurid, borderline-satirical thriller about a disturbed individual who pushes the disturbed logic of 21st-century media to its ultimate conclusion, Gilroy clearly has some larger questions in view, along with a cinematic legacy that includes “Taxi Driver,” “Network” and Michael Powell’s 1960 shocker “Peeping Tom,” a movie whose influence only continues to grow.

This movie is something of a family affair: Dan Gilroy’s older brother Tony, the director of “Michael Clayton” and “The Bourne Legacy,” helped produce this film (as did Gyllenhaal), and Dan’s twin brother, John Gilroy, is the editor. Admittedly we have a small sample size to work with, but the Gilroy trademark appears to be hard-edged, actor-driven genre films with a social conscience. Certainly what Dan Gilroy gets from Gyllenhaal here may be the best performance of a fascinating career. Since at least “Donnie Darko” Gyllenhaal has understood that he reads on-screen as obsessive, eccentric and overly intense. While those qualities can be rendered somewhat sympathetic -- as in “Love and Other Drugs,” his underappreciated rom-com with Anne Hathaway -- they’re often best suited to characters who seem detached and disordered, like the twitchy cop he played in “Prisoners” (pretty nearly the only thing that made that movie watchable).

Lou Bloom, the autodidact newshound of “Nightcrawler,” carries the misanthropy and pathology of the Gyllenhaal persona to new heights. Lou is a lank-haired, hollow-eyed person who has mastered the script of human communication, up to a point, without any sense of its underlying meaning. As the film begins he is unemployed, a scavenger and low-level thief scraping out a marginal living by his wits and a litany of business-school, self-help nostrums he has apparently learned from the Internet. ("I've made up my mind to find a career I can learn and grow into. Who am I? I’m a hard worker. I set high goals. I have been told that I am persistent.") As Lou might put it, when he finds out that you can make good money by being the first person with a video camera on the scene of a gruesome crime or gory accident, he is delighted to discover a career path so well suited to his skill set, core competencies and sense of personal initiative.

It would be grossly overstating the case to say that Lou is ever likable, but at least he seems pathetic, a Gollum-like alienated soul who has stumbled upon an occupation that may be distasteful but is not flat-out immoral or illegal. With his seductive night shots of L.A.’s freeways and boulevards -- the cinematography is by ace Robert Elswit, who shoots Paul Thomas Anderson’s films -- Gilroy lures us into a deceptive power relationship not unlike the one Lou strikes up with Nina, the hard-boiled TV producer played by Rene Russo (who is Gilroy’s wife). At first Nina feels the same mingled pity and distaste for Lou that we do. She’s a news professional with a stylish wardrobe and a helmet-like coiffure, focused on the ratings book and her benefits package; he’s a socially marginal loser with an evident personality disorder. But Nina also sees that Lou has the right sensibility for her bottom-feeding, sleazoid news broadcast, which thrives on stories about “crime creeping into the suburbs” – middle-class whites or Asians victimized by brown-skinned people – and “relatable” families dying in gruesome freeway crashes.

Furthermore, Nina and Lou both understand that the narrative of racial paranoia they’re spreading is profoundly untrue, however much it speaks to a divided city on a symbolic level. In one of their increasingly tense negotiating sessions, Lou observes that crime rates are dropping in L.A. (as in other major cities), which makes his fear-inducing, adrenaline-spiking footage an especially valuable commodity. No doubt this is an overly broad interpretation of a movie that’s mainly meant to mess with your mind, but I can’t resist: News shows like Nina’s, aimed at older, whiter viewers uncomfortable with social and demographic change, have become propaganda broadcasts that keep the public terrified and docile, even though there’s no Goebbels-like genius pulling the strings behind the scenes. (As the comments on every Salon story about the Ferguson shooting and related phenomena will demonstrate, racist crime paranoia is deeply ingrained on the Internet, even in an age of near-historic lows in violent crime.)

Lou starts out as a raw, wide-eyed stringer who knows nothing about the technology or internal politics of TV news, and seizes on every scrap of mentorship offered by Nina and every tossed-off piece of advice from Joe (Bill Paxton), his main rival in the nightcrawler biz. As Lou knows from all that online reading, information is power, and he amasses power far more quickly than more or less well-adjusted people like Nina or Joe realize. Since he holds to no moral code and feels no compassion toward other human beings, Lou understands the fundamental logic behind TV news with almost Nietzschean clarity: If the larger story we’re telling isn’t true, and black and brown people from the ghetto aren’t really coming for your kids, then why feel constrained by artificial categories like “facts” or “evidence” or “the truth” in the first place? If the news stories that present themselves are insufficiently satisfying, why not manipulate them, or create some of your own?

British actor Riz Ahmed offers a little low-key humor as Rick, a semi-homeless drifter who becomes Lou’s navigator and factotum, never sure whether to surrender to the tide of upbeat doublespeak or assert some vague semblance of human decency. But the heart of the film lies in Gyllenhaal’s scenes with Russo, as the dynamic between Lou and Nina – and between Lou and us, in a sense – gradually turns upside down. When he asks her out to dinner and makes it clear that he’d like to take their vendor-client relationship to a more personal level, Nina is mostly bored, a little irritated and maybe 1 percent titillated by this unexpected attention from a younger guy. But that 1 percent is all that Lou requires; as we will discover in a truly terrifying later encounter, he’s like a tiny Hitler, who understands her unconscious desires better than she does.

OK, so the idea that TV news is evil and that media culture breeds and enables a disturbing detachment may not qualify as original thinking. But “Nightcrawler” executes its ideas with tremendous craft and cool, and the courageous and counterintuitive pairing of its leads -- Russo is 60, and Gyllenhaal 33 – produces two electrical, interlocking performances and undeniable erotic chemistry. Gilroy and Elswit gradually intensify the hellish atmosphere, taking us into a triple-murder scene in the San Fernando Valley followed by a tremendous motor-vehicle chase and a climactic shootout. Is it hypocritical for a movie about the dangers of voyeurism to end with a gruesome thrill ride? We are a hypocritical people.