The Ghomeshi syndrome: Delusional creeps, from Clarence Thomas to Gamergate 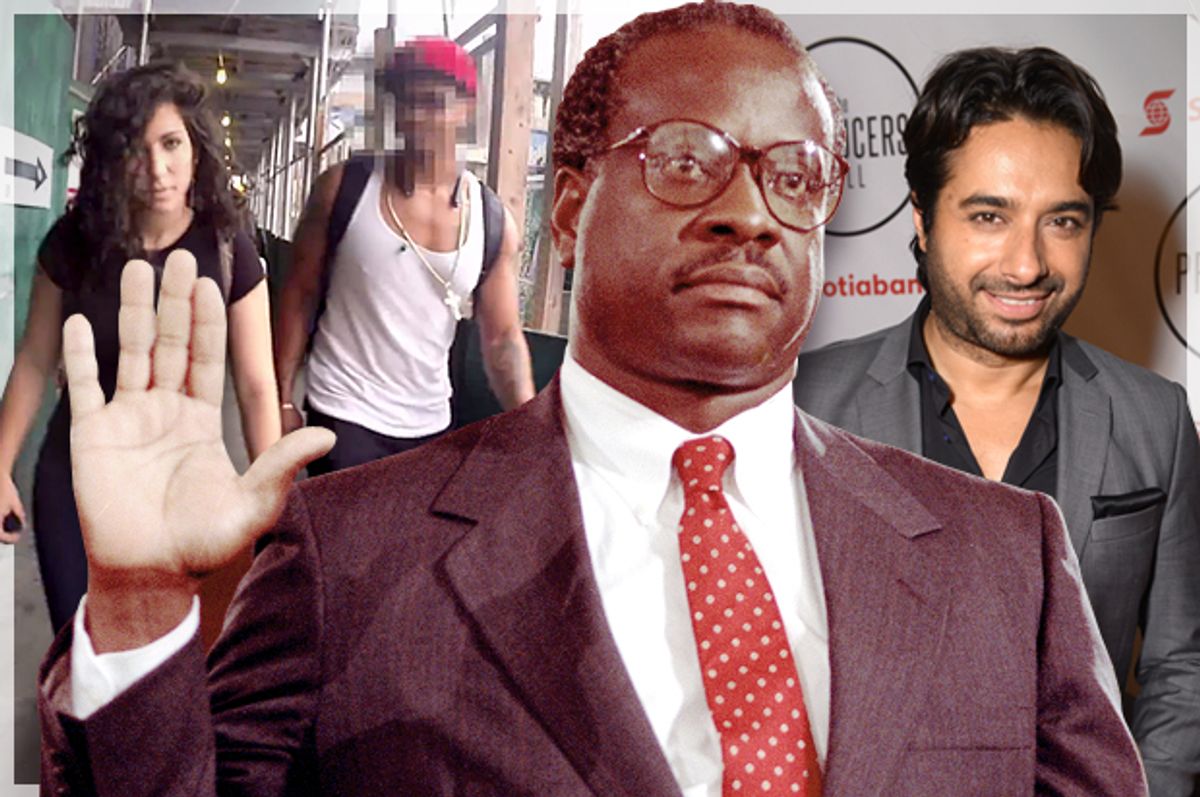 As more and more women come forward to accuse Jian Ghomeshi of harassing, assaulting and abusing them, the disgraced Canadian radio personality has undoubtedly become far more famous south of the American border as a violent pervert than he ever was as the host of “Q,” the CBC’s culture program. (His show was broadcast widely on NPR affiliates, and he definitely had a following among bicoastal culture-vulture types, which may help account the intense media interest in the story.) Ghomeshi’s initial protestations that he was being persecuted for his unconventional tastes in the bedroom now seem mendacious or delusional or both. Indeed, I strongly incline toward “both”: Ghomeshi is lying to us and lying even more fervently to himself, and I believe versions of this syndrome can be seen all around us in the contemporary struggle over gender roles, sexual conduct, misogyny and “rape culture.”

There’s something sad and troubling to be found just below the surface of this case, which has implications far beyond the career meltdown of a public-radio talking head. Ghomeshi appears to be one of those men -- a distressingly large number of men, it seems – who are unable or unwilling to pick up basic social cues from women about sexual and dating behavior (among other things). They seem to view women as a mysterious alien species who do not say what they mean or mean what they say, and they stumble far too easily into paranoid stereotypes about bitch-covens of “jilted exes” and ball-slicing feminists. Encountering this pattern of behavior in a much-admired and good-looking media celebrity, who honestly should have had no trouble finding consenting partners for whatever level of kinky sex he wanted, offers us a chance to come to grips with how widespread it is. (As Dan Savage has reported, at least one of Ghomeshi’s former lovers says the BDSM activities were fully consensual in her case – but that seems to have been pure luck.)

We can see this pattern of pathological cluelessness in “Gamergate,” the vicious troll war that has targeted a handful of prominent women in and around the video-game world. We can see it in last week’s viral video clip depicting a woman being catcalled dozens of times on the streets of New York, and in the heated debate it sparked. We can most certainly see it in the seamy Internet underworld of “men’s rights advocates” (MRAs) and “pick-up artists” (PUAs) laid bare by the disturbing saga of Elliot Rodger, the mass shooter who killed seven people, including himself, last May in Isla Vista, California. All these episodes, although driven by disparate dynamics and featuring different casts of characters, point us back toward one of the formative cultural narratives of our time, the Vietnam of the gender wars: the story of Clarence Thomas and Anita Hill.

I’m not suggesting that these stories are all equivalent, but I am suggesting that they are connected at a cultural and psychological level, and that they manifest the same peculiar male pathology at various levels of intensity. What we see in these cases is a widespread disorder that is less easy to see, and far more widely tolerated, than obvious crimes like violent spousal abuse. We see men who seem to have adapted poorly to the era of feminism and female sexual agency, and who react to that stress by retreating into fantasy or delusion, perhaps into a dissociative or narcissistic personality disorder that makes it impossible for them to see or evaluate their own behavior. (I use those terms metaphorically rather than diagnostically, but I think they fit well enough.) However we choose to categorize it, these men develop a psychological mechanism that allows them to behave like creeps while insisting to themselves that they’re not creeps.

Indeed, what makes the Ghomeshi story so startling and so potent is the contrast between what we saw on the surface (or believed we saw) and the apparently disordered personal life that lay underneath. Here was a charismatic and successful journalist with an intriguing personal history, an alt-rock past and an intellectual veneer. He emanated progressive values, cultural sensitivity and Torontonian sophistication, and was well known as a supporter and ally of LGBT cultural figures. I feel certain that Ghomeshi viewed the Rodger case with appropriate male-feminist horror, and stood ready to cast the misogynist trolls of Gamergate into the cultural darkness. (I was a guest on “Q" at least twice, but I don’t know him personally.)

It would have shocked precisely nobody to learn that Ghomeshi was a big-time player with a girl (or a guy) in every port; we live in relatively liberated times, and even Canadians need some excitement. Furthermore, just to be clear, if he were into extreme rough sex or BDSM and his partners had all been willing participants, I’d be in the chorus telling people to mind their own damn business. Ghomeshi’s disastrous Facebook post, after the CBC had fired him and just before the big Toronto Star story about his conduct with women was about to break, tried to strike precisely that tone: I’m a Wild and Crazy Guy! If you puritans can’t handle it, that’s your problem. In hindsight, what’s striking there is the profound and genuine-sounding level of denial; that guy really believes he has done nothing wrong.

Unfortunately, the mounting evidence – except for those of you who wish to cling to the bitch-conspiracy hypothesis -- suggests that Ghomeshi gets off on something more disturbing and insidious than a bit of rough play, which has now and again been misinterpreted by unhappy customers. He appears to brutalize women who don’t like it and don’t want it, while convincing himself that “no means yes” and it’s all consensual and fine, and he’s still the good guy he always thought he was. The idea that someone who seems so intelligent and perceptive on the radio turns out to be an obtuse and self-deluded creep behind closed doors, to the point of what sounds like a serious personality disorder – I mean, it’s more like a cliché than a surprise, but one that points at some dangerous cultural truths.

But crucifying and/or psychoanalyzing Jian Ghomeshi is not the point; for better or worse, he’s toast. It’s the obtuseness and self-delusion at work -- what I earlier called the pathological cluelessness -- that links the Ghomeshi case to Gamergate and Elliot Rodger and Clarence Thomas. I remember a female friend telling me that even though she completely believed Anita Hill’s testimony she felt sorry for Thomas, a man so awkward in his own skin that his best effort at flirting with an attractive woman was to describe bestiality porn and discover a pubic hair on his Coke. Ever since the big Senate showdown between Thomas and Hill 23 years ago – an epoch-shaping event that put sexual harassment on the cultural-political map -- journalists and historians have generally taken the line that one of them had to be lying. I don’t see it that way: Like Ghomeshi, the eminent jurist convinced himself he had done nothing wrong, and that whatever comments he may or may not have made about blondes fellating horses were harmless, jocular, large-spirited and suave. (As someone with a close relative on the autism spectrum, I tend to resist any connection between this kind of male pathology and that diagnosis. In Thomas' case, it might fit.)

This issue is about the persistent male tendency not to notice, or not to care, when you’ve crossed the line into unwanted attention or harassment or stalking or abuse or assault. (The context does not have to be sexual; this is also a viable explanation for the phenomenon known as "mansplaining.") Or rape. Because that’s what we’re finally talking about, isn't it? Some of the accounts of Ghomeshi’s accusers sound an awful lot like forcible, nonconsensual sex acts. Like rape-rape. And that’s the ultimate function of this narcissistic disorder, or whatever it is: To compel someone else to submit to your desire when she doesn’t want to, to subordinate her will to your own, to insist -- to yourself, first and foremost -- that you know her wishes better than she does and that you’re not doing anything wrong. Or at least not wrong-wrong.

Hold off on those #notallmen tweets and those accusations of "misandry," guys. First of all, an exaggerated defensive reaction to an article about weird and clueless behavior just doesn't make you look good. (I tell you this because I care.) Furthermore, I’m not saying that all men are guilty for the offenses of Ghomeshi and Rodger and Thomas and the Gamergate geeks and every other woman-hating creep. I am saying that those things hurt women and poison men, and that protecting or defending men who trend in that direction is not doing our gender any favors. Most men do not chronically mistreat women and lie to themselves about it, and that's great.

But it’s not enough to proclaim that we’re free of disease when we see the effects of the plague all around us. If we’re being honest with ourselves, we’ve all known that guy as a friend, a family member or a colleague -- the creepy, overly insistent dude who pushes too hard and says the wrong things and won’t take no for an answer and mostly seems harmless -- and we’ve tolerated him for way too long. Infamously, 52 men in the United States Senate convinced themselves that Anita Hill was lying for inscrutable woman reasons, or else that Clarence Thomas' lecherous and turdlike conduct toward women had no bearing on his suitability for the highest court in the land. Jian Ghomeshi’s friends, it appears, knew he was a "bad date" prone to "strange behavior" and "ridiculous pick-up lines." They didn’t tell him that beating up women without their consent was deeply wrong and he needed help. Thomas will have an enduring impact on history, for good or ill, while Ghomeshi will soon be forgotten. The level of shame, in both cases, is about the same.