We have been stupefied: How Republicans subvert democracy, and the Democrats' sorry dereliction

As the Republicans take the Senate, these four reasons explain why the republic is in serious, serious trouble 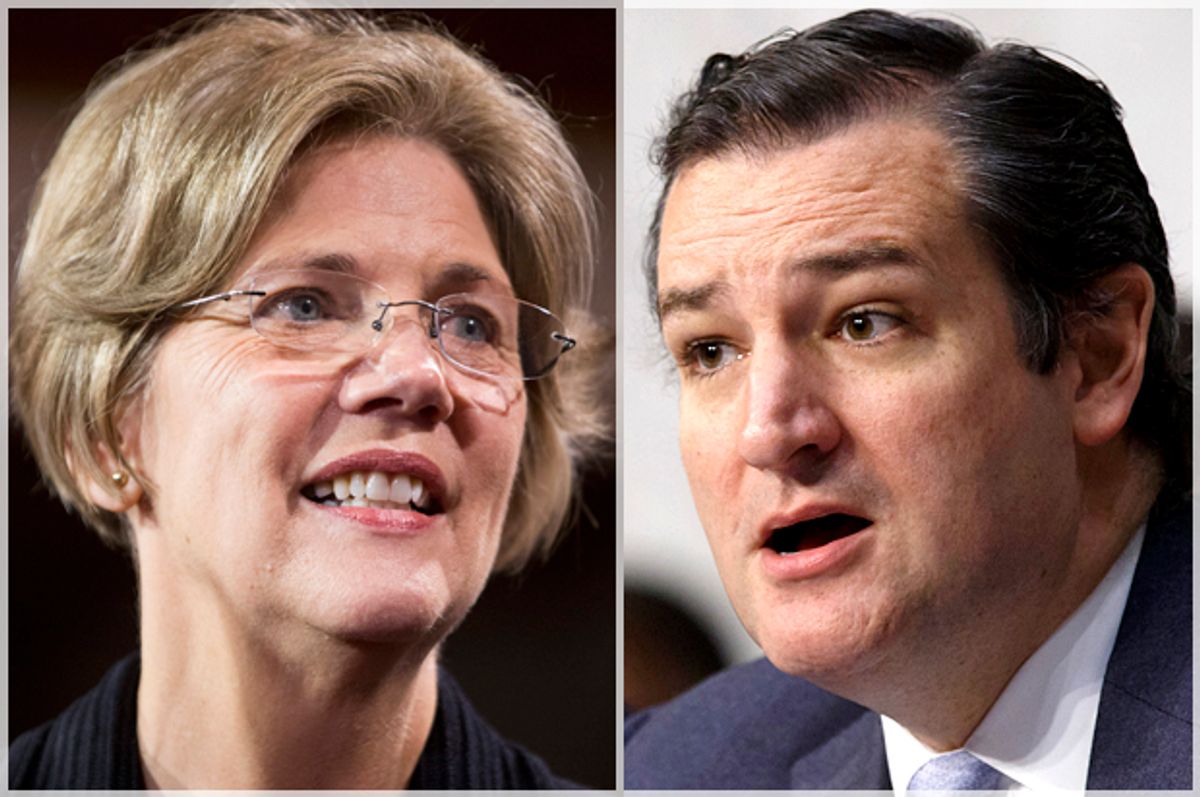 The American republic didn’t end this week because conservative Republicans captured the Senate. Conservative Republicans captured the Senate because the republic has been ending, as liberal Democrats and libertarian Republicans surf four predatory new asymmetries in our national life  – in security, in speech, in investment and in consumer marketing. These immense imbalances of power are submerging the elections, delegitimizing the liberal capitalist republic that promised to give security, speech, investment and marketing deeply different meanings and consequences than the ones they’ve acquired.

Nothing less than a transformation of American citizenship worthy of Nathan Hale, Mahatma Gandhi, Martin Luther King Jr. (who learned a lot from Gandhi), Vaclav Havel and, yes, Edward Snowden can free us from yet another spectacle of politicians who look like pinheads dancing on pins’ heads.

Security: When American civilian planes brought low the American superpower in 2001, they shook the dollar-driven premise that a massive, militarized national-security establishment can protect an open society. Yet instead of rethinking its premises and policies the “military-industrial complex” that Dwight Eisenhower warned against has recovered from the shock of 9/11 to become a global search-and-destroy directorate, nearly independent of democratic governance, that is making American society less conducive to the voluntary civic discipline, candor and trust that alone sustain a republic.

Certainly technological change is driving an Orwellian transformation of “homeland” security through surveillance. Henry Kissinger warns that “The Commander of U.S. Cyber Command has predicted that ‘the next war will begin in cyberspace’” and that it will be asymmetrical. But the prospect that our vast military could be paralyzed by hackers is making the national-security “cure” as dangerous as the disease of terrorism itself. Not only liberals but especially libertarian conservatives, who’ve long mocked the line, “I’m from the government and I’m here to help you,” understand the new “security” danger well.

No wonder that Edward Snowden, 29, a libertarian conservative, has sacrificed so much to warn us that with only a “policy switch,” any administration could use the National Security Agency’s massive database to chill individual Americans’ exercise of the most basic freedoms of speech and political action. Fear of such abuse is already inducing online self-censorship and chilling public debate, Snowden believes.

Snowden is impressing viewers of Laura Poitras’ documentary "CitizenFour" as a brave, levelheaded citizen reminiscent of Nathan Hale, who was similarly young when he was hanged in 1776 for defying the only “legitimate” government of his time, a monarchial, mercantile, multinational regime, on behalf of a nascent republic. Now Snowden is defying what that republic is becoming.

Predictably, some people consider Snowden a traitor, as some of Hale’s contemporaries did him. But just as Hale was reported to have said, with impressive composure and courage, before he was hanged, “I only regret that I have but one life to give for my country,” so Snowden has written that “the Obama administration is not afraid of whistleblowers like ... me. We are stateless, imprisoned, or powerless. No, the Obama administration is afraid of … an informed, angry public demanding the constitutional government it was promised – and it should be.” That an analogy to Hale isn’t a stretch should be frightening in itself; more frightening is the growing asymmetry between what 18th century Britain imposed against Hale’s republican spirit and what it’s equipped to impose on everyone in its close cooperation with our NSA, as reported in the Poitras documentary and the Guardian.

Speech: An equally chilling asymmetry between citizen speakers and incorporeal speakers has grown not only with surveillance but also with recent jurisprudence that compounds a long trend of equating business corporations with persons. Rulings such as Citizens United reduce citizens' sovereignty over markets, championed by both Roosevelts, to trivial “consumer sovereignty” within markets. Markets cannot be free and open, or their participants hopeful and prosperous, without appropriate, occasionally aggressive regulation. But today’s market managers, driven to maximize shareholder value at all other costs, unable to engage in long-term planning that might defer their short-term gains, destroy markets’ own contributions to society by buying off the politicians whom citizens elect to regulate them.

This is done by funding or otherwise abetting election campaigns that are prohibitively expensive because over-determined by advertisements on profit-driven media. The Supreme Court has intensified this asymmetry. Your speech isn’t free in any republican sense if a few donors and corporate managers have megaphones while you have laryngitis from straining to be heard: As if adding insult to injury in 2012, megaphones were denied to Occupy protesters against economic and social devastation caused by deregulated markets.

Investment: Another insult has been the pretension that the republic is in crisis because Aunt Millie wants Social Security and firefighters want pensions. They want them all the more now that predatory, casino-like financing has thrown millions of Americans out of their jobs and homes or degraded their wages and working conditions, thanks largely to asymmetries that are inherent in capitalism itself.

The early 20th-century British writer R. H. Tawney noted “the naïve psychology of the business man, who ascribes his achievements to his own unaided efforts, in bland unconsciousness of a social order without whose continuous support and vigilant protection he would be as a lamb bleating in the desert.” Writing in 1926, Tawney nicely anticipated investors’ reactions to the crash three years later and the admonitions of Sen. Elizabeth Warren right now.

The devastation of the American Dream is also partly a consequence of the global intensification of capitalist asymmetries: Transnational businesses that escape regulation and taxation force governments to compete with one another to attract them by scanting basic public needs even more than they already have by being bought off right at home. The genius of markets in focusing narrowly on investors, workers and consumers as self-interested individuals quickly becomes their stupidity in obliviousness to the social consequences of their gyrations. That’s why we need democracy to catch up with plutocracy by strong transnational regulation. Even in Nathan Hale’s time, Boston Tea Partyers defied the East India Company, one of the world’s first multinationals. Apostles of global prosperity such as Fareed Zakaria -- and perhaps libertarians such as Edward Snowden -- should revisit that page of both American and global history.

So should the apostles of markets to parts of the world that haven’t had them before, promising to empower the tribal and peasant people by commodifying homes and farms that have never had deeds that entitled them as capital. The political scientist Benjamin Barber warns in his book “Consumed” that unless strong political regulation “secures newly manifested capital against exploitation and abuse,” the economy that “discloses, legitimizes, and hence captures” formerly extralegal assets opens doors to predatory and exploitative encroachments on them.

Consumer Marketing: These daunting new asymmetries in security, speech and investment can be reduced only by millions of citizens as vigilant and mobilized as Snowden and Elizabeth Warren. Instead our body politic is so drained of candor and trust that we’ve let a court conflate the free speech of flesh-and-blood citizens with the disembodied wealth of anonymous shareholders, and we’ve let lawmakers, bought or intimidated, render us helpless against torrents of marketed fear and titillation that are dissolving a distinctively American democratic ethos the literary historian Daniel Aaron characterized as “ethical and pragmatic, disciplined and free.”

What might awaken and empower more citizens, instead of isolating, stupefying and discouraging them? The answer involves breaking out of the Catch-22 that runaway markets have imposed not just by disadvantaging and dividing their supposedly sovereign consumers but also by actively groping and degrading us.

The disease that today’s investors and managers embody and are imposing on the rest of us is their own incapacity to endure short-term pain for long-term gain – or to endure long-term planning and deferred rewards for short-term gratification. What today’s capitalism is becoming no longer permits it, and the chaos it sows makes democratic deliberation impossible and authoritarian non-solutions attractive.

Many over-stressed, over-stimulated Americans have adapted to living with variants of force and fraud that erupt in road rage; lethal stampedes by shoppers on sale days; elaborate (and intensively marketed) security precautions against armed home invasion; gladiatorialization in sports; nihilism in entertainment that fetishizes violence without context and sex without attachment; micro-aggressions in daily relations; commercial groping and goosing of private lives and public spaces in the marketing of ordinary consumer goods; and a huge prison industry to deter or punish broken, violent men, most of them non-white, only to find schools in even the “safest,” whitest neighborhoods imprisoned by fear of white gunmen who are often students themselves.

Stressed by this republican derangement, millions are spending billions on palliatives, medications, addictions and even surveillance designed to protect them from themselves. All those vials, syringes, security systems and shootings reflect the insinuation of what Edward Gibbon called “a slow and secret poison into the vitals of the empire …” until Roman citizens, having surrendered their republic to authoritarians in pursuit of security, “no longer possessed that public courage which is nourished by the love of independence, the sense of national honour, the presence of danger, and the habit of command. They received laws and governors from the will of their sovereign, and trusted for their defense to a mercenary army.”

If the situation looks somewhat worse than it really is, that’s owing partly to profit-crazed media that sensationalize what’s worst and ignore what’s not. Still, some of us feel like the old Roman republicans, who, recalling their former freedoms, felt, as Livy put it, that “We have become too ill to bear our sickness or their cures.” At Davos, more than a few elite economic and strategic leaders survey the public wreckage they’ve caused and tell one another that, after all, the people must be ruled. But these would-be leaders can barely rule themselves.

If there’s a silver lining in Snowden’s having to spend all his energies fighting the state, it’s that his battle spares him the perverse compromises made by libertarian and free-market conservatives who can’t reconcile their sincere commitment to republican ordered liberty with their knee-jerk obeisance to unregulated market riptides that are dissolving republican virtue and sovereignty before their eyes.

Global capital has released the genie of power from the nationalist bottles in which democratic governments held some strength and, with it, some legitimacy. International diplomacy, once a velvet glove on the iron fist of state power, often now finds itself covering only the algorithmically driven nothingness of mercurial “shareholder value.” The United States military’s “Africom” may soon become a hired security service for that continent’s new Chinese investor/owners.

Meanwhile, in China, Africa and the United States, real citizens stand alone. But so it was when Nathan Hale defied a seemingly impregnable British empire (as would Gandhi, whom Winston Churchill dismissed as “that naked fakir”). So, too, when Martin Luther King Jr. and impoverished black churchgoers, unarmed and trembling, walked into Southern squares to face armed men and dogs in what even Justice Clarence Thomas once called a “totalitarian” system of segregation. So, too when a hapless playwright named Vaclav Havel and other activists in Soviet Eastern Europe defied a vast security state that few in the West had thought would give way. So, too, now, as Snowden defies what the American republic has become. Control of the Senate will matter as much as it should only when it reflects a convergence of Snowden-like libertarians and Warren-like liberals against Republicans’ perverse determination to subvert democracy and Democrats’ equally perverse dereliction of it.