Amid the feasting, a note of "oh crap": Now we have to make everybody unhappy, control Cruz, and fight Hillary 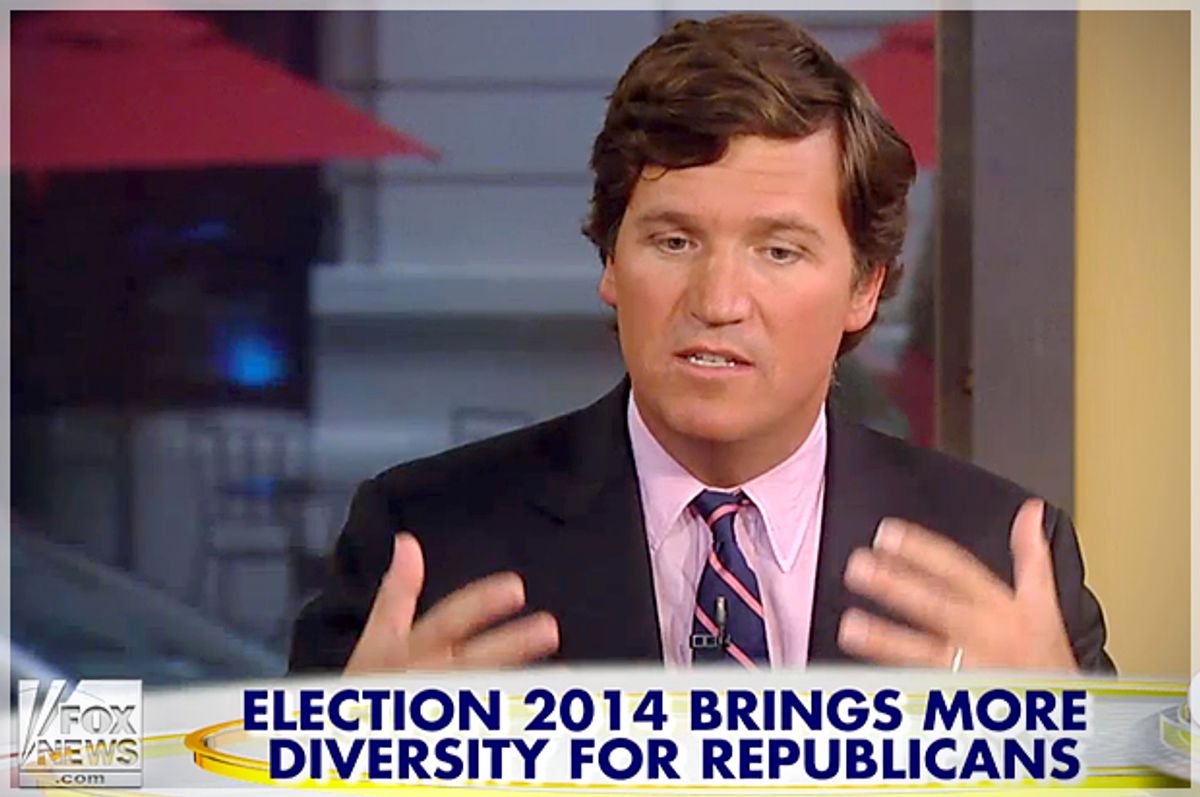 I have been reading “Lord of the Rings” to my kids over the last few weeks, and we just got to the part where the Orcs start flinging severed heads marked with the Lidless Eye over the walls of Minas Tirith. I had forgotten how violent and upsetting it is. They went to bed, the election happened and I got up on Wednesday morning and turned on Fox News. It all kind of fits together.

Highlights of the day after the deluge, on Fox: Tucker Carlson said something I agree with. (That sentence caused me considerable pain.) Jonah Goldberg almost, halfway did. Multiple commentators proclaimed that “the war on women is over,” which does not mean that women won the war, and still less that the Republican base has given up the drive to outlaw abortion. It was never more than “picayune sloganeering,” sneered one millennial-flavored dude in the 10 o’clock hour. “This is a country that believes we have serious problems.” (I couldn’t identify him in the moment, and that clip has been scrubbed from the archives.) What that means in English is that the GOP succeeded in purging or suppressing its most openly misogynistic candidates, at least for now, and found some helmet-haired businesswoman types to elect here and there.

There was feasting and merriment in the wake of the big Republican sweep, but not quite as much as you might think. Fox also broke away to cover other kinds of Fox-worthy stories more than I was expecting: The Ebola nurse who should be imprisoned, the Pennsylvania cop-killer who Googled himself, some murder somewhere with some faint terror-paranoia angle. Sure, the early-afternoon gang clustered around Carlson on that hideous sofa had fun branding the political corpse of Barack Obama with the mark of the Lidless Eye, and I guess they’ve earned the right to gloat, up to a point. The 2014 midterms were indeed a referendum of sorts on the president and his agenda, and here are the results: Do older white voters really, really hate him? Yes, they do. Have younger voters and people of color, the diverse demographic that got him elected and reelected, largely lost hope and lost interest? Yes, they have.

It wasn’t anything we didn’t already know, perhaps. But even if you firmly believe the Democratic Party has made its own bed, infested it with spiders and centipedes, and now gets to lie in it, the scale of this defeat is extremely bad news for liberals and progressives. So the most intriguing and surprising ingredient of Fox’s post-election coverage, whether in the afterglow of glorious victory (as today, or in 2010) or the hangover of stinging defeat (as in 2012, 2008 and 2006), was the sudden injection of cautious realism into a network that thrives on overheated rhetoric and unfounded accusation. Simply put, the Fox mood on Wednesday was oddly troubled, even amid the unbridled glee of Carlson and his gaggle.

In a not-so-veiled jab at the MSNBC competition, one female talking head opposite Carlson crowed about watching “some of the other networks” where “the faces of certain Democrat analysts were melting off” with every GOP triumph. Nothing beats the smell of melting Democrat analysts in the morning, but cooler heads like Goldberg and veteran Fox host Chris Wallace weren’t enjoying it as much. Those guys may be odious creeps and thinly veiled Republican shills, but neither is ignorant of political calculus and both sounded distinct notes of caution in separate segments. They noted that both parties remain in disgrace and the public’s attitude about government and the future is distinctly downbeat; unless someone can do something about that, the psychotic pendulum swings will keep on coming.

Wallace warned that the GOP leadership is already “extremely anxious about 2016,” when the electoral map will put Republican senators on the defensive and it’s logical to expect a liberal backlash and millions of female voters hypothetically excited about Hillary Clinton. (We’ll get to the Clinton-bashing later, which is where I faced the existential crisis of agreeing with Tucker Carlson.) Wallace is entirely correct that the current situation poses “tremendous risks for newly empowered Republicans” and that “the Democratic brand is badly damaged” after this historic defeat. That sounds contradictory but actually sums up the conundrum of electoral politics pretty well: Most people hate both parties, and the minority who bother to vote sway back and forth between the available options, like a drunk getting rolled in competing casinos.

This was a historic Republican victory, much bigger than any Fox loyalist had suspected or expected. Let’s not sugarcoat that. How much money could I have won in Atlantic City, betting on the largest GOP House majority since the early 1950s and Republican governors in deep blue states like Illinois, Maryland and Massachusetts? (Democrats of the Bay State: Get over Martha Coakley, already! She’s just not that into you. Maybe she’s a nice person who loves her dog and all, but no mas. Next up for Martha: Losing the local PTA presidency to an illiterate flat-earther with multiple convictions.)

I attribute no decency or integrity to the Fox News talking heads in noting that they can see the dangers beneath this unprecedented sweep, which raises problems that have no obvious solutions. Now that big Republican majority is supposed to “govern,” ha ha, in a context where their actions are guaranteed to disappoint the crazy, scared Caucasian sliver of the electorate that voted for them. Because they can’t undo Obamacare and seal off the border and launch a bunch of birther-Benghazi investigations and a five-front ground war against Iran, ISIS, Russia, Edward Snowden, several random African countries and whoever else wants a piece.

The Republicans can’t do any of that stuff, or much of anything else. They can gum up the works worse than before, they can pass some crazy bills Obama gets to veto, they can refuse to confirm anybody he nominates to anything or – worst option of all, for them – they can make some really bad bipartisan deals on the budget and immigration that no one will like. So you get one guess how all that plays out in the 114th Congress, quite likely a theater of hate unlike anything seen in this country since the prelude to the Civil War.

A couple of hours after Wallace’s words of warning, syndicated pundit Jonah Goldberg joined in to observe that the new Republican majority already showed signs of fracturing between “confrontational conservatives” who want all-out war against the Obama administration and “purple-blue Republicans” who face difficult 2016 campaigns in Democratic states. Leaving aside the deliberate mislabeling – the last remaining member of the purple-blue Republican caucus is Sen. Susan Collins of Maine – this represents a new effort by Fox and its puppeteers in the GOP establishment to marginalize Sen. Ted Cruz, 2016 presidential aspirant and leader of the Blow It All Up Caucus.

A few minutes earlier, Cruz had appeared on the network, Democrat-juice dripping from his fangs, urging his fellow Republicans to seize the moment. Not to pass any meaningful legislation, of course, because he doesn’t want that. But to mount an endless series of anti-Obama witch hunts on Benghazi and the IRS and Fast and Furious and the birth certificate and whatever else. (OK, he didn’t really say the birth certificate. He didn’t have to.) That intra-Republican conflict ought to be fun to watch, in a morbid and masochistic way, but the problem for so-called pragmatists like Goldberg is that Cruz and his minions have an achievable goal and they don’t. Cruz just wants to screw stuff up (you can substitute other words for “screw” and “stuff”) and tip the entire system into ungovernable chaos. The Goldbergian GOP mainstream supposedly wants to get things done, mostly really bad things. There is some infinitesimal comfort to be found in the fact that they can’t.

Oh, yeah – my mash-note to Tucker Carlson. Inevitably, all the Wednesday chatter on Fox began to focus on the 2016 presidential race and the ogre-like presence of Hillary Clinton. Numerous Fox hacks observed that Clinton’s campaign-trail presence seemed toxic this year – it didn’t help Alison Lundergan Grimes or Kay Hagan or Bruce Braley or Michelle Nunn or Mark Udall, who all seemed well positioned at one time or another and all went down the slippery slide of GOPocalypse. But Chris Wallace was too wily to fall for the argument that Clinton is badly damaged by 2014; she remains a “prohibitive favorite” for the Democratic nomination and a “formidable candidate” against any possible Republican nominee, he said, in an electoral landscape that will look very different from this week’s.

Later in the day Carlson, whose every moment on earth and on the air is spent celebrating smug Republican white-boy entitlement, took a moment away from dancing on Obama’s political grave to agree that Clinton’s presidential prospects are not much affected by this mini-Armageddon. “The thing is, she and her husband have no ideology, and no relationship to the Democratic brand,” he said. “They’re shape-shifters, political survivors. They’re not really liberals or conservatives. They just do whatever is necessary to keep going, and move from one identity to the next.” There was distasteful, grudging admiration there – one political animal acknowledging another – and a keen observation of the essential dysfunction in American politics, where only one of the two parties has anything close to a clear ideology. Carlson understands that Clinton and the shape-shifting Democrats will be back, riding the next pendulum swing. If you choose to seize on that as a seed of hope, you’re welcome to it.