"The Theory of Everything": This sepia-toned Oscar bait could have been so much more powerful 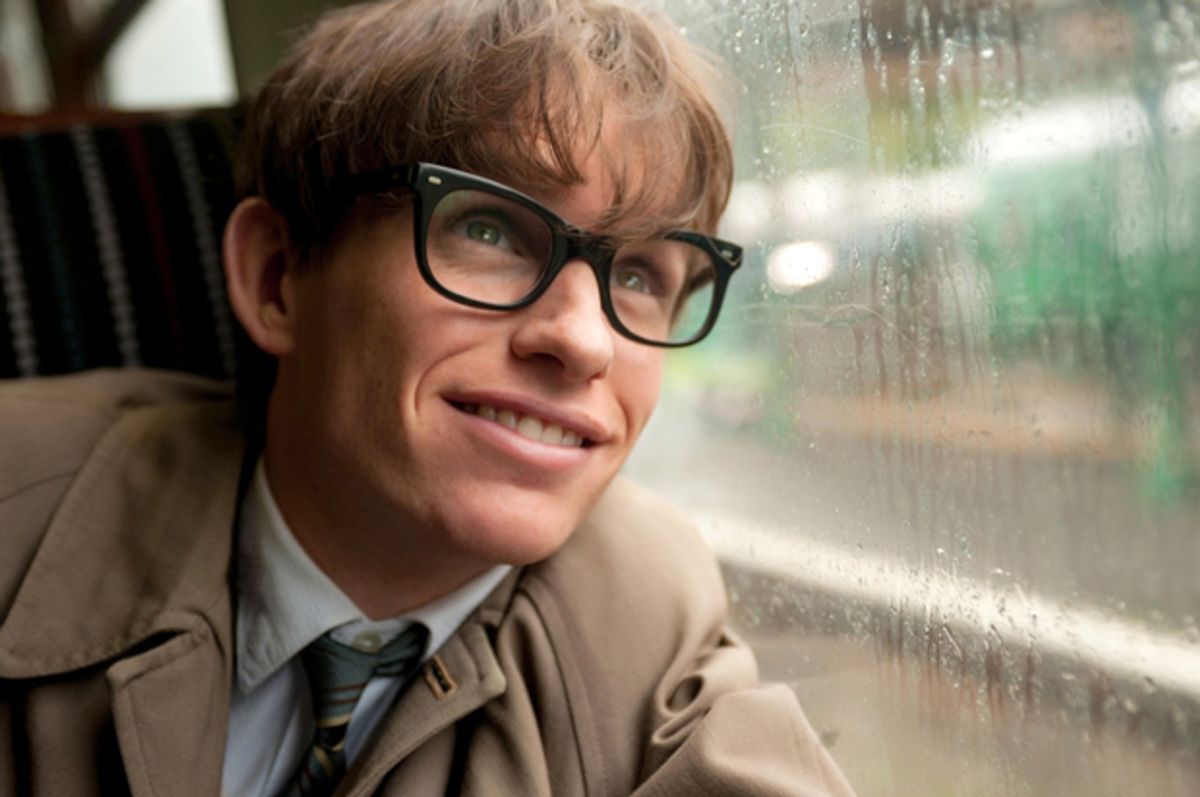 Eddie Redmayne in "The Theory of Everything" (Focus Features)
--

Sometimes a story – a true story, a fictional one or a hybrid of the two – is sufficiently powerful and intriguing that it can break through the formula and packaging around it. Such is almost but not quite the case with “The Theory of Everything,” a sweet, restrained and overstretched film about the unusual relationship between physicist Stephen Hawking and his former wife, Jane. Director James Marsh (already an Oscar winner for the documentary “Man on Wire”) and screenwriter Anthony McCarten (adapting Jane Hawking’s memoir) opt for the safe, pretty and reassuring English period-piece choices the whole way through, as if deliberately underselling the fact that this is a story about two remarkable people facing extraordinary circumstances.

I recognize it’s a cop-out to dismiss a film worked on for years by talented people as Oscar-bait, as if that summed up all its qualities. Surely there is room in the universe for inspiring biopics, tales of repressed romance and subtly shaded compositions featuring people wearing cardigans and tweed jackets in front of Gothic architecture. I do rather wish the fall season weren’t quite so full of such nostalgic, “King’s Speech”-inspired fare; this year alone, we have two different Oscar-oriented prestige films about Cambridge professors. (This one and “The Imitation Game,” with Benedict Cumberbatch as code-breaking mathematician and proto-computer genius Alan Turing.)

If the handsome but utterly familiar framing of “The Theory of Everything” puts the compelling performances of Eddie Redmayne and Felicity Jones front and center, that’s obviously the point. You couldn’t create a more awards-ready role than that of Stephen Hawking, a world-famous scientist who has not only survived a severe debilitating illness far longer than anyone expected but endured it with apparent good humor and considerable insight. That said, Redmayne – who remains little known on this side of the Atlantic – never surrenders to stereotype, capturing not just the nuances of Hawking’s physical disability but also his puckish humor and sometimes prickly personality. There’s an unexpectedly moving scene late in the film when Stephen delivers Jane both good news and bad news – two big acknowledgments that, in a sense, she’s been waiting for – that captures something essential about Hawking’s isolation from the rest of humanity.

Felicity Jones has a more difficult row to hoe in playing Jane, a character we never get to know all that well, perhaps because the story sticks close to her perspective. Jane was a pretty, proper English rose of the intellectual variety, a scholar of medieval Romance poetry who had no idea she was falling in love with the most important physicist of his era, or with a man who was about to develop symptoms of motor neuron disease or ALS, which in the 1960s typically led to death within two or three years. She agreed to marry Stephen and bear his children knowing that the road ahead would be arduous, and that she would likely be a young widow. One of the most interesting subtexts of “The Theory of Everything” – and the interesting stuff in this movie is almost all subtext – is the fact that the real bargain turned out to be very different indeed.

Roughly the first half of Marsh’s film blends three strands of melodrama: The uneasy romance between apparent opposites – the atheist brainiac with socialist leanings and the devoutly religious young woman with a passion for poetry and music – the progress of Stephen’s disease and the development of his scientific genius. I suppose there’s no way to do the latter justice in a mainstream movie, but all we get in “The Theory of Everything” is the vague impression that Hawking originally had the mathematical insight that the universe began with a singularity akin to a black hole, but has more recently developed a different and perhaps contradictory conception of the “boundaryless universe.” There is literally no discussion about why these ideas were revolutionary, how they altered the course of cosmological theory and what sorts of doors they opened for others, such as the various iterations of “multiverse” theory that are all the rage these days.

So, fair enough – this isn’t a movie for Ph.D. candidates in physics, and as a famous anecdote from Hawking’s grad-school years reveals, most physics Ph.D. candidates felt overwhelmed by his intellect anyway. So what is this movie about? In its strongest and quietest moments, “The Theory of Everything” is about an unconventional marriage with an unconventional destination, and about the fact that not every love story has to end with “happily ever after” to be deemed acceptable. Since many people may see the movie who don’t know much about the Hawkings’ real-life marriage, I won’t go further than that. For me, the point of universal connection lay in the fact that marriage is always difficult and always involves sacrifices on both sides and a lot of mutual miscomprehension. What Jane and Stephen Hawking faced was an exaggerated version of that, under exceptional circumstances and in the public eye, but it’s still something many of us can recognize.

Any film made about two living people, with their cooperation, is necessarily going to be limited by considerations of tact and taste, and that goes double or triple in this case. There’s a mildly subversive fable about the unpredictable nature of love and life to be found in “The Theory of Everything,” beneath the ultra-English character-actor performances (David Thewlis as Stephen’s professor and mentor; Simon McBurney as his father; Jonathan Hellyer Jones as Stephen’s caretaker and Jane’s, um, close friend), the wistful, sepia-toned montages and cinematographer Benoît Delhomme’s chronically picturesque images. You have to dig to find it, and it doesn’t have much to do with Hawking’s quixotic quest for an equation that would explain all of physical reality. It’s more about how to make the best of the time we get with each other in a highly imperfect universe, which is all the everything those of us dumber than Hawking will ever understand.