The GOP's infernal election strategy: Why suppressing the vote could keep Republicans in power

2014 was a disaster for Democrats. And things could get even worse 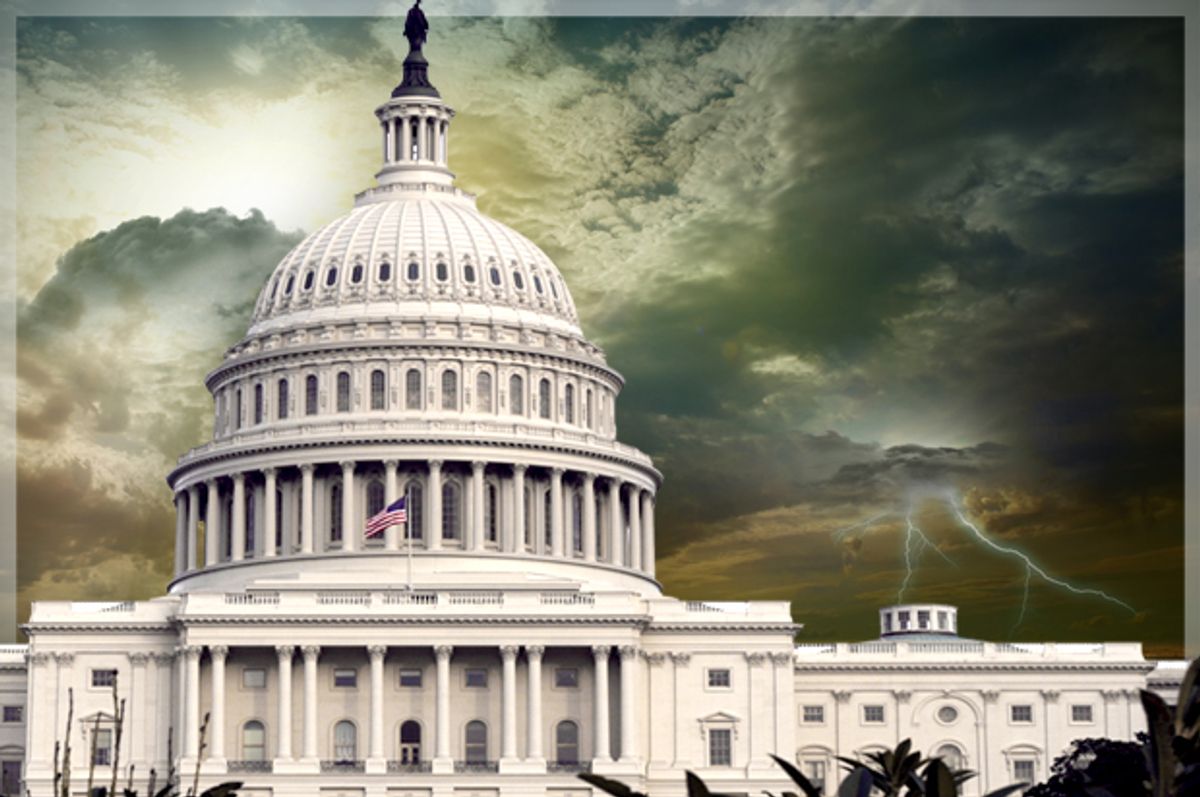 Last week's election has seen many Republicans scoffing at the thesis, put forward by John B. Judis and Ruy Teixeira in 2004, that there was an“Emerging Democratic Majority” that would usher in a long period of Democratic dominance. Ross Douthat, for example, has written of an “Evaporating Democratic Majority.” The subsequent analysis has often focused on low turnout among young voters -- an important story, but far from the whole thing. In fact, this election sets the stage for how the Republican Party will react to changing demographics over the next several election cycles. Will they change their policies to appeal to a how America has changed, or will they try to change who gets to vote?

The dramatic age gap in the most recent midterm election has been frequently noted in recent discussions on the midterms. While it is certainly important that only 12 percent of voters in the most recent election were under 30 and 37% were over 60, this doesn’t tell much. About 12% of voters in the 2010 and 2006 elections were under 30 as well, if anything the increasing gap is largely due to the aging of the population (and persistent gaps in youth turnout). However, while the “liberalism” of youth has been widely discussed, there are problems with the narrative, among them, the huge differences between young whites and young people of color (see chart). Much of the liberalism of millennials is not that young whites are more liberal, but simply that there are fewer of them. Even with these caveats, it’s clear that much of the current Republican agenda (particularly opposition to gay marriage) is anathema to young voters, while racial appeals make voters of color who might otherwise support Republicans wary. The question for Republicans is how they will respond to an increasingly diverse population and one that doesn’t support their agenda. One option, and the one that gave them the Senate this year, is massive voter suppression. They will have many more opportunities for such suppression: Before the election, Republican controlled 59 of the 98 state legislative chambers; they now control 67. That means they’ll be able to pass more ALEC-sponsored legislation to reduce reproductive rights, bust unions and cut education and health insurance. It also means that Democrats will find it difficult to win back these chambers in time for the 2020 redistricting. (Redistricting is part -- though not all -- of the reason for Republican stranglehold over the House.) Republicans will also have leeway to pass even more restrictive voting laws -- rolling back same-day registration and early voting, passing voter ID laws and tightening restrictions on convicted felons. All of these laws are proven to shift the electorate toward conservative policies by reducing turnout among people of color, young people and low-income people. Unsurprisingly, the ones already on the books have worked, and the 2014 midterm had lower turnout than any election since 1942 (before the Voting Rights Act).

As I’ve shown, there is a strong chance that felon disenfranchisement laws affected the outcomes of important Senate races. I also found evidence that voter ID laws (particularly those that required a photo ID) reduced turnout. These findings are support by academic studies on the question. Long story short: It’s almost certain that voter suppression efforts led to an election in which three in ten eligible citizens voted. It’s highly likely that they tilted the playing field toward conservative politicians.

Republicans as a party could likely remain viable for a while with this strategy. They control enough legislatures to effectively gerrymander the congressional map. The Senate favors sparsely populated Conservative states. Democrats are concentrated in urban areas which further solidifies Republican avantages. Republicans would have trouble getting enough voters to win the Presidency, but with control of both bottom chambers, they could still gridlock the political system. Since such gridlock primarily benefits the rich, who are the main constituency of the Republican party, this isn’t much of a problem. Further, research shows that when whites are informed that the country is becoming increasingly diverse, they show a stronger preference for the Republican party. Recent research by Felix Danbold and Yuen J. Huo finds the whites informed that they will no longer be the majority in 2050 are less likely to say they support diversity. Political scientist Spencer Piston tells Salon that in his research using the American National Election Studies data, “I find no relationship between age and prejudice against blacks (as measured by a stereotype battery) among whites.” This suggests that voter suppression and coded racial appeals could serve Republicans for a long time.

The other option is for Republicans to tailor their agenda to people of color. While this may seem impossible -- given the recent race-baiting by a gargle of Republican candidates -- it is not. Spencer Piston recently released research showing that light-skinned Latinos and Asian-Americans are more likely to support Republicans than darker-skinned Latinos and Asian-Americans. He tells Salon that this held even after controlling for income, nationality and gender. Further, in currently unpublished research, he finds that support for redistribution is not affected by skin tone. This suggests that Republicans could possibly win over some Latino voters with a conservative message, if only they reduced racial resentment. But they won’t.

As I’ve shown, the class bias in our electorate benefits the rich. One study of developed countries finds that in countries with higher turnout, governments redistribute more money. The U.S. has the second lowest rate of turnout among OECD countries, and it also, unsurprisingly, has some of the lowest levels of redistribution. As long as the Republican party serves the interests of the rich, it will work endlessly to suppress low-income voters. Further, it will hold the government in gridlock, which benefits the rich. At the end of the day, the sad fact is that the more people who vote, the worse it is for the wealthy people who overwhelmingly support Republicans.

There were other factors at play in the Senate race, certainly. The incredible cynicism of modern conservatives -- who both actively sabotage government and then complain when it doesn’t works -- was important. Americans, constantly told by pundits that a President should lead, appear to be unable to understand that deep structural factors prevent him from doing so (a problem on both sides). Further, in many races, the liberal candidates were simply inept, and those who ran on truly progressive agendas, like Governor Malloy of Connecticut, did well.

However, it cannot be ignored that in recent years, one political party has centered their election agenda around disenfranchising voters. Midterms are historical bad for groups that vote Democratic, but massive voter suppression is the only way to explain the Republican “wave.”  With the aid of the Supreme Court’s decision in Shelby County, states have been able to pass legislation which cause mass disenfranchisement. There will certainly be more. As the country becomes more diverse, the Republican party has a choice: play on racial fears, stoking racial animus or try to broaden its coalition of voters. Right now, it has prefered the former. That isn’t good for democracy.