Loretta Lynch's Wall Street friends: What you should know about AG nominee's finance past

Looking for accountability for financial crimes that wrecked the economy? Here's why the status quo is more likely 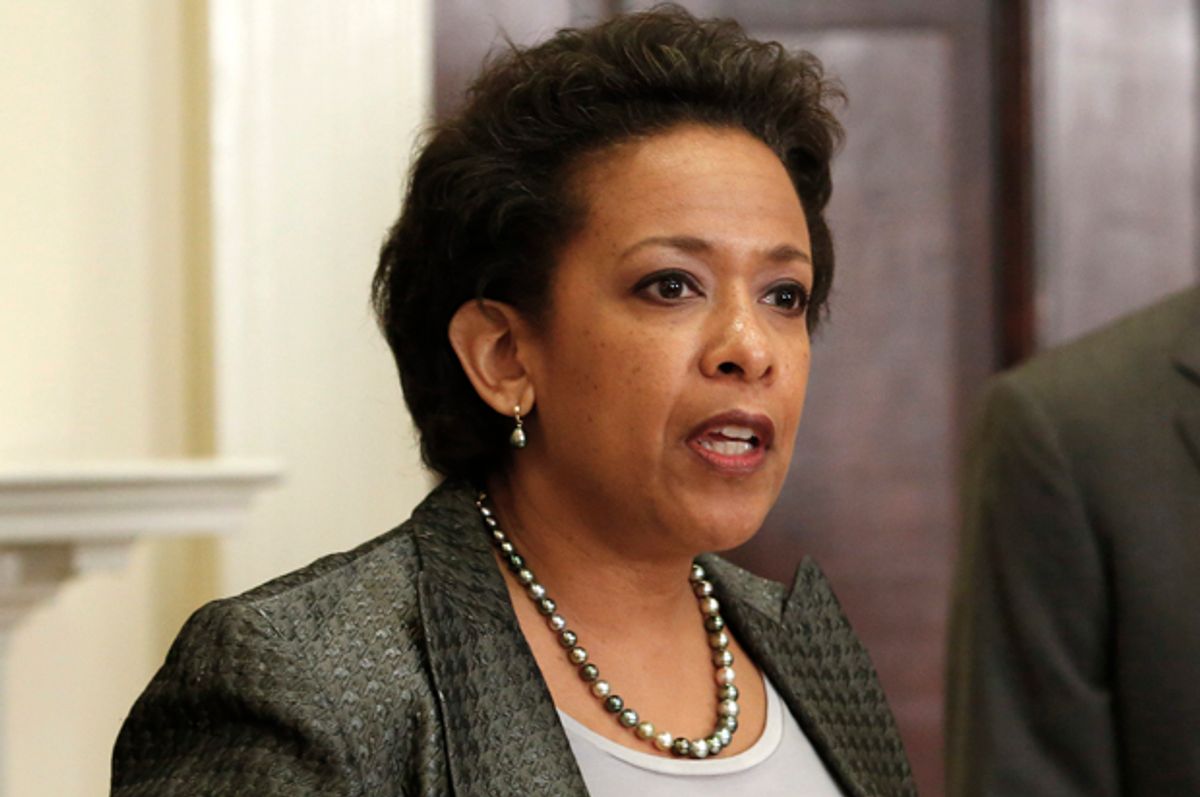 Despite all the unabashed punditry, relatively little is known by the country about Loretta Lynch, the low-profile U.S. attorney for the Eastern District of New York, whom President Obama nominated on Saturday to replace Eric Holder as attorney general. We’ve heard about the cases Lynch has prosecuted for the government, from the police shooting of Haitian immigrant Abner Louima to public corruption cases against the likes of Rep. Michael Grimm, R-N.Y.

But what’s less known is Lynch’s career in the private sector. After reviewing her record in this capacity, it's not that she’s openly corrupted by the forces that increasingly rule our government, so much as she’s marinated in their worldview, in their cultural milieu. To ask her to take on powerful interests in finance would be like asking someone to rat out their friends.

Lynch’s first job was as a litigation associate at Cahill Gordon & Reindel in the mid-1980s. Their litigation department includes the legendary First Amendment lawyer Floyd Abrams, who defended the New York Times in the Pentagon Papers case (Abrams subsequently argued the Citizens United case, on “campaign money is speech” grounds). But it also does a great deal of white-collar defense in securities and antitrust law, representing companies like AIG, HSBC, Credit Suisse, Bank of America and more. It’s a corporate law firm.

Lynch then served at the U.S. attorney’s office in Brooklyn for 11 years, rising to run the office during the end of the Clinton administration, from 1999 to 2001. When she left, she became a partner at Hogan & Hartson (it has since merged to become Hogan Lovells). It’s a giant D.C. law firm specializing in government regulatory, corporate and financial law. Like Cahill Gordon & Reindel, it advises all sorts of corporations, and it even has a separate lobbying firm, one of the top five in the United States. We know that Lynch worked on white-collar criminal defense and corporate compliance while in private practice at Hogan & Hartson.

Eventually, Lynch went back to run the U.S. attorney’s office in Brooklyn for a second stint in 2010, serving there until her nomination for attorney general. But in between, she worked in corporate law and white-collar criminal defense at two mega-law firms for nearly two decades.

Now, she was just a litigation associate at Cahill Gordon & Reindel. And at Hogan & Hartson she did admirable pro bono work with prosecutors in the Rwandan war crimes tribunal. But what this says is that she has a long history interacting with a certain class of corporate lawyers and executives, understanding their perspective in critical ways.

That’s further buttressed by a strange detour in her legal career – serving as a director of the New York Federal Reserve Board from 2003 to 2005. Here she worked with people like former Citigroup chairman Sandy Weill, ex-Lehman Brothers CEO Richard Fuld and ex-Blackstone chairman Pete Peterson.

The directors of the New York Fed don’t play a huge role in supervising Wall Street banks or conducting monetary policy. But their biggest job is to select the president of the organization. And in 2003, Loretta Lynch had one of six votes in the appointment process that eventually put someone named Timothy Geithner in charge.

Lynch’s tenure coincides with the inflation of the housing bubble and the widespread use of mortgage securities and derivatives among the banks the New York Fed is meant to supervise. Their failure to identify and work to prevent the bubble doesn’t necessarily reflect on Lynch. But the board of directors is supposed to provide oversight to management, as well as a review of their internal auditing procedures. We don’t know how Lynch acted in this respect, as minutes of New York Fed Board of Directors meetings weren’t made public until 2007. It’s fair to say that nothing changed as a result of Lynch’s actions, if there in fact were any.

Again, the point here is that Lynch has a long career of close association with many extremely powerful people. Given that we’ve seen in the past decade a virtual crime wave among this very class, it’s just not that likely Lynch would have the will to crack down on malfeasance in the executive suites, which could implicate her colleagues and friends. It’s not corruption, more like mindshare.

To take this out of the realm of theory, let’s look at some of Lynch’s recent corporate crime actions as a federal prosecutor. She was instrumental in two financial fraud settlements, which President Obama touted in announcing her as attorney general. One was the $7 billion mortgage-backed securities fraud case against Citigroup, part of a series of high-profile settlements that amounted to public relations vehicles for the Justice Department, so they could claim to have “gotten tough” on big banks. In reality, shareholders paid the fines, the perpetrators faced no jail time, investor victims received no compensation, and the public never got the full story on the extent of the wrongdoing.

Lynch’s other major financial fraud case was a $1.9 billion deferred prosecution agreement with HSBC for facilitating money laundering for terrorists and Mexican drug cartels. Carl Levin’s Senate Permanent Subcommittee on Investigations basically gift-wrapped this case for federal prosecutors in an extensive report, relating lurid tales of HSBC collaborating with some of the worst people on the planet for years. But nobody from the bank went to jail or paid any fines. Lynch’s office didn’t even force HSBC to plead guilty; the deferred prosecution agreement just imposes a fine and a monitoring process as an out-of-court settlement. As Matt Taibbi pointed out at the time, a kid caught with a few ounces of drugs will get thrown into jail for years, but a bank helping the criminals sell billions in drugs to those kids will have no trouble.

You can say that Main Justice prosecuted these cases, that Lynch’s name just appeared on the press releases, that it was Eric Holder’s show. But as a federal prosecutor, Lynch could have easily made decisions to charge individuals after the settlements were completed. She had the information at her disposal. But she chose instead to go along to get along, and you can see her elevation to attorney general as part of the reward.

And that’s the picture you get from Lynch’s public and private career. She swims in the same pool as the moneyed elite, and her actions don’t pressure them too deeply. The Justice Department keeps insisting that someday they’ll prosecute someone for the corporate crimes that wrecked our economy, but there’s no reason to actually believe that. Under Loretta Lynch, like under Eric Holder, I don’t expect much determination to get it done. And ultimately, you have to hold responsible the president who gave them both their jobs.