A horrible gaffe shows Twitter is not for amateurs 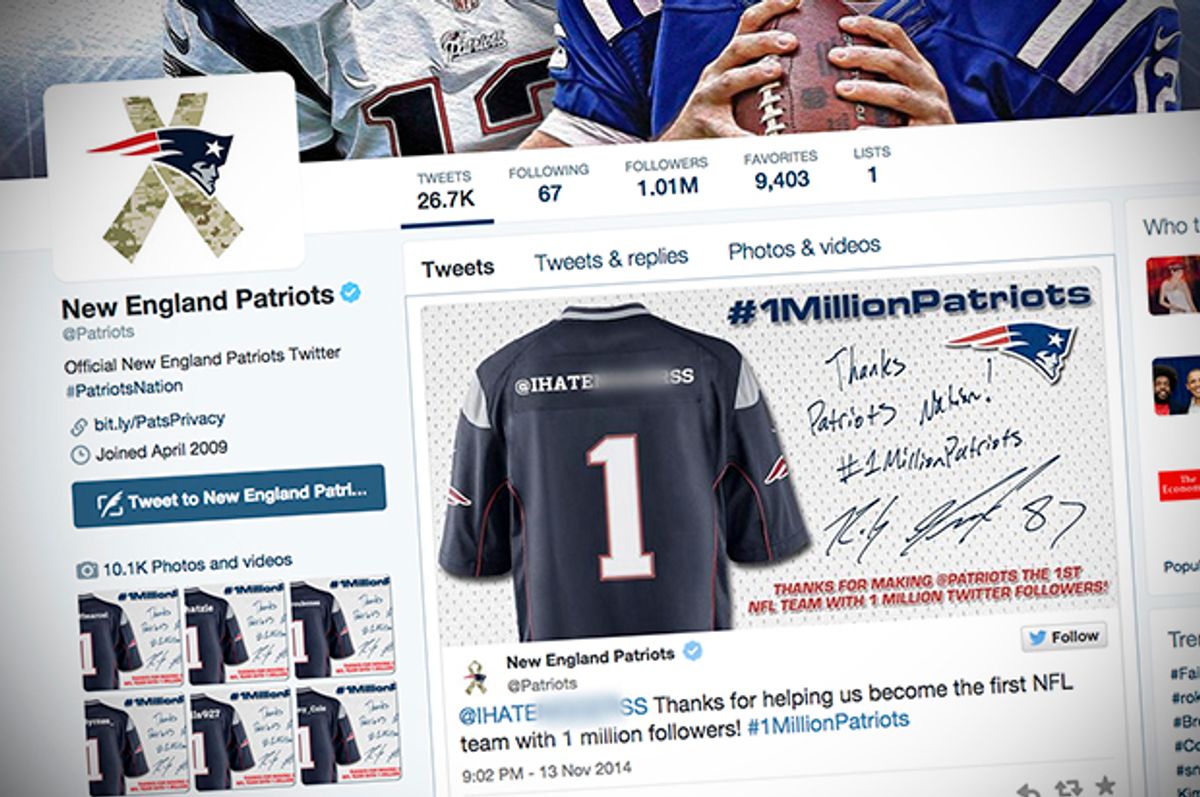 Serious question: What skill set does it to be the head social media honcho for a prominent individual or brand? Because after this week, I'm guessing the answer is, none. Let's just say that after a long and steady run, fans of the Washington Redskins are now handing over the "Most Racist Thing to Happen in the NFL Lately" crown to the New England Patriots.

It's been quite a banner week for the word "oops." First there was television star and accused rapist Bill Cosby's ill-advised invitation to his fans to "Go ahead, meme me!" – a challenge that quickly backfired when critics began posting images of the comedy legend accompanied by references to the more than one dozen women who have accused him of sexual assault. Then there was World's Most Famous Quack Dr. Oz's "magnificent train wreck" of a Twitter Q&A, a free-for-all of inquiries for the increasingly disgraced television host like, "I just got my flu shot, when can I expect to develop autism?" and, "Is it true you got into medicine because it was easier than starting your own cult?" And then there was what happened with the New England Patriots. Tip to the good folks working on Pats' Twitter account: Before you publicly thank a fan, check the name of the handle.

On Thursday, the Patriots, feeling inexplicably boastful about being the first NFL team to reach 1 million Twitter followers, told fans, "We're saying thanks to @patriots' 1million followers w/ custom digital Pats jerseys - RT for yours! #1MillionPatriots." The idea was a seemingly simple bit of automated personalization -- RT the announcement and get an image of a team jersey with your handle on it. The promotion has thus far garnered nearly 9,000 retweets. And that would be great if nobody on Twitter had an incredibly offensive user name. But as anyone who actually spends time on Twitter knows, that is so very not the case. Am I right, all of you who've encountered the racists, homophobes and misogynists with Internet access? So it was only a matter of time before the inevitable occurred, and in there among messages to BostonMomof4 and BostonFatGuy there popped up the unfortunate "IHATENIGGERSS Thanks for helping us become the first NFL team with 1 million followers!" -- accompanied by the image of a jersey with the user's repulsive name on the back.

SBNation notes that the tweet "sat untouched on the Pats' Twitter feed for over an hour," an eternity in social media embarrassment time, before the team's account suspended auto tweeting. The Patriots' social media team then worked to rectify the gaffe, deleting the tweet and telling followers, "We apologize for the regrettable tweet that went out from our account. Our filtering system failed & we will be more vigilant in the future." That's about all it can do about it right now – that, and wait for the gleeful mockery to die down.

It wasn't an intentional act of racism that led to the incredibly offensive retweet. But it was an easily foreseeable result of a calculated social media promotion that I would wager several individuals within the team's promotion department were involved with. Apparently not one of them thought, "Hey, sometimes people use their Twitter handles to say horrible, horrible things." Not one of them said, "We need to come up with a very hands-on plan, or do something entirely different." And that arrogant naiveté – like that of the Cosby and Dr. Oz teams, like that of DiGiorno's, which in September hastily tried to exploit the #WhyIStayed domestic violence awareness hashtag into a promotion for pizza -- is exasperating. These are individuals and brands with deep pockets and utterly clueless social media strategies. Who think the online community is made entirely of a bunch of retweeting sheep who will blindly do their promotion work for them. Think again, folks. Or just think, period, before you roll out your next inane, unwelcome, just plain dumb idea.