"The Homesman": Tommy Lee Jones and Hilary Swank are unforgettable in a ruthless, classic western

Both leads are stunning in a bleak, transformative fable about the madness and loneliness of the American frontier 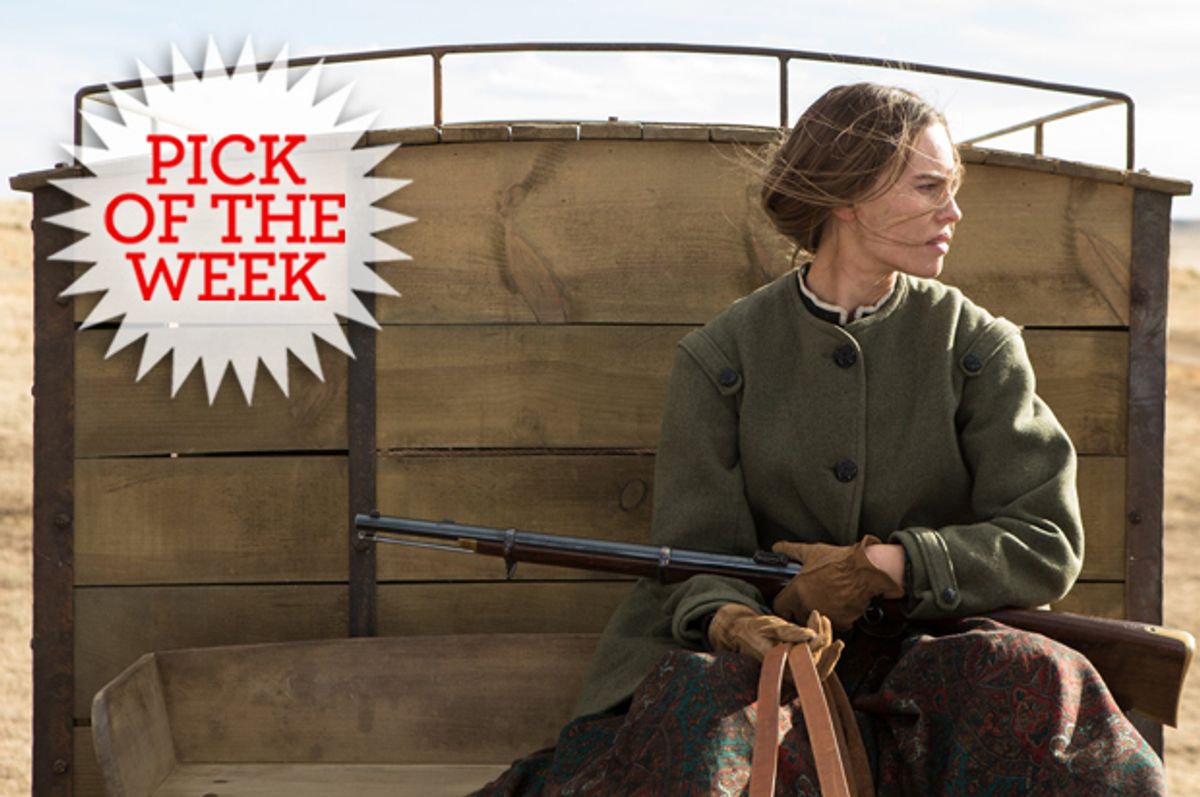 When the character played by Tommy Lee Jones in “The Homesman,” who calls himself George Briggs but may not be the most trustworthy source, tells Mary Bee Cuddy, the plucky frontierswoman played by Hilary Swank, that she’s “as plain as an old tin pail,” you may want to stop the movie and file a complaint. As Jones is well aware, he’s no beauty-pageant contestant himself, and Briggs is a grubby, unkempt character with a disreputable past, who resembles a hunk of gristle chewed and then spat out by a stray dog. But Jones, as always, knows what he’s doing. In only his second feature as a director, the laconic 68-year-old star has made a wrenching, relentless and anti-heroic western that stands among the year’s most powerful American films. Not everyone will like “The Homesman,” but if you see it you won’t soon forget it.

In its own unshowy way, “The Homesman” is a profoundly compassionate, subversive and tragic story about the unacknowledged sacrifices made by women throughout history, about the tenuous bonds of community and mutual obligation that make human life possible and about the thin, wavering line that separates civilization from anarchy. Like so many great stories told before, it recounts a dangerous voyage: Mary Bee and Briggs, a pair of social outsiders, must transport three women across the trackless prairie of the Nebraska Territory to the Missouri River, Iowa and the relative order of the existing United States. (No date is specified, but it has to be the late 1850s.) Why do these women have to go? Because they've snapped. They're chained inside a wagon, a trio of frontier wives driven insane by the hardship, disease and loneliness of life in an unforgiving, wind-swept wilderness.

I’m not naive enough to believe that a movie with this subject matter and this setting will be a big hit or a major player in the Oscar race. But it should be, and in a curious way “The Homesman” fits into our contemporary cultural debate about sex, gender and the status of women. George Briggs may not be much of a feminist, but I think Jones now gets to claim that title if he wants it. Plain as a tin pail Mary Bee may be, but Jones (and Briggs too) understands that she, and not her male companion, is the true hero of “The Homesman.” (It’s only a tiny spoiler to say that the title refers to her, more than to Briggs.) She can plow, shoot and ride as well as any man in the territory, while still clinging to feminine dreams of domesticity, family and prosperity. If her struggle comes against insurmountable odds and points toward an ambiguous conclusion, such is America.

Tommy Lee Jones has taken his time in becoming a director, and he certainly isn’t doing it to chase money or fame. His peculiar charisma as an actor derives from the combination of Texas good-ol’-boy authenticity – he’s the son of an oil-field worker and a beauty-shop proprietor – and his conviction that he’s smarter than damn near everybody he ever meets. This may not be an irrational belief: Jones was a scholarship student at an elite prep school in Dallas and then at Harvard, where he famously roomed with Al Gore and played offensive guard in the legendary 29-29 tie with Yale in 1968. (Another well-known Texan, George W. Bush, was on the sidelines of that game – as a Yale cheerleader.) Jones is often regarded in the media as a disagreeable interview subject, and I’ve had the experience. After he accused me of being a New York intellectual who never went outdoors, we got along OK. I principally remember his pedantic explanation of the difference between his personal level of fluency in Spanish (high) and the language skills displayed by his redneck character in “The Three Burials of Melquiades Estrada.” He also said it was “maddening” that the framed artwork on the walls of the Regency Hotel had not been squared off correctly, and spent a few minutes rearranging it.

“The Homesman” is the work of that perfectionist redneck-aesthete, all right – the kid from San Saba, Texas, who now owns a string of polo ponies in Argentina. I’m not saying that’s a bad thing. Jones is not concerned about protecting his on-screen image or playing likable characters, and I’m sure he’s aware this movie will get sold short because it belongs to a genre that strikes many people these days as inherently boring (or inherently nostalgic, which is worse). Before the movie started, I heard other critics in the screening room complaining about sitting through two hours of Western scenery. I didn’t get a chance to interview them afterward, but I would say that cinematographer Rodrigo Prieto’s harsh, horizontal landscapes – like the haunting, unsettling score by Marco Beltrami – are anything but picturesque and reassuring, and serve to support a strikingly bleak portrait of life on the 19th-century American frontier.

Jones and his co-writers, Kieran Fitzgerald and Wesley A. Oliver, adapted “The Homesman” from a 1960s novel by Glendon Swarthout, which would seem to belong to the same tradition of Western revisionism that produced Charles Portis’ “True Grit.” I loved the Coen brothers’ recent film version of “True Grit” (and I liked the John Wayne one too), but “The Homesman” is something like that story with all the sweetness scraped off the surface, and its plucky adolescent heroine all grown up and carved out of granite. Mary Bee has a burgeoning farmstead, with corn, wheat and livestock; she once played the piano, back in New York state, and dreams of owning the first melodeon in the territory. She proposes to a neighboring farmer, framing the whole thing as a sensible business deal, but he plans to head back East for a wife: Mary Bee is both too plain and too bossy.

There’s some rueful humor to Mary Bee’s upright insistence on carving out what she regards as a normal life in these wearying circumstances, and Swank gives a magnificent performance as a woman whose calm and capable exterior cannot completely conceal her worsening desperation. But don’t let anyone tell you that the beginning of “The Homesman” is quiet or bucolic or any such nonsense. In an almost bewildering montage, Jones shows us the circumstances behind each farm wife’s descent into madness: One has seen three children die of diphtheria within a week, another has murdered her own baby, a third is haunted by the ghost of her Norwegian-born mother. Mary Bee agrees to be the “homesman” who returns these broken women to civilization because it’s the right thing to do, and because the men of her desolate Nebraska settlement seem sunk in self-pity and full of excuses.

John Lithgow gets a brief and agreeable role as the town preacher, and the three female captives (played by Grace Gummer, Miranda Otto and Sonja Richter) make increasingly strong impressions, like a wordless Greek chorus watching the struggle from an ironic distance. But most of the drama comes from the uneasy symbiotic relationship between Mary Bee and Briggs, whom she discovers whimpering on horseback, with a noose around his neck tied to a nearby tree. She rescues him from this slow-motion lynching after he promises to do anything she asks, but the dimensions of that promise – what will she ask of him, and will he do it? – keep getting larger and larger. Briggs is a man full of bluster and almost totally without honor, but he shares with Mary Bee the sense that time is running out, and that if he is ever to make anything of his life it has to happen now.

Jones never flinches from the unsavory attitudes of these 19th-century Americans, especially when it comes to the near-total state of war with local Native Americans, and refuses to offer the fantasy of a tacked-on happy ending, with Mary Bee and Briggs heading off for a new life of tiny tots and roasted potatoes in their covered wagon. At the beginning, toward the end and in the very last frames – in which we watch Briggs re-crossing the Missouri, into the darkness, amid an impromptu drunken hoedown -- “The Homesman” is a deeply upsetting film, if also one that offers unlikely moments of inspiration. It suggests that even someone as unredeemable as Briggs can act nobly, for a little while, but also that it won’t last. In its unsentimental poetry, its stripped-down imagery and its unforgettable lead performances, “The Homesman” is a ruthless western classic.

“The Homesman” is now playing in New York and Los Angeles, with national release to follow.