Frontline's "Firestone and the Warlord" is a rare TV glimpse of Africa, and a chilling look at American involvement 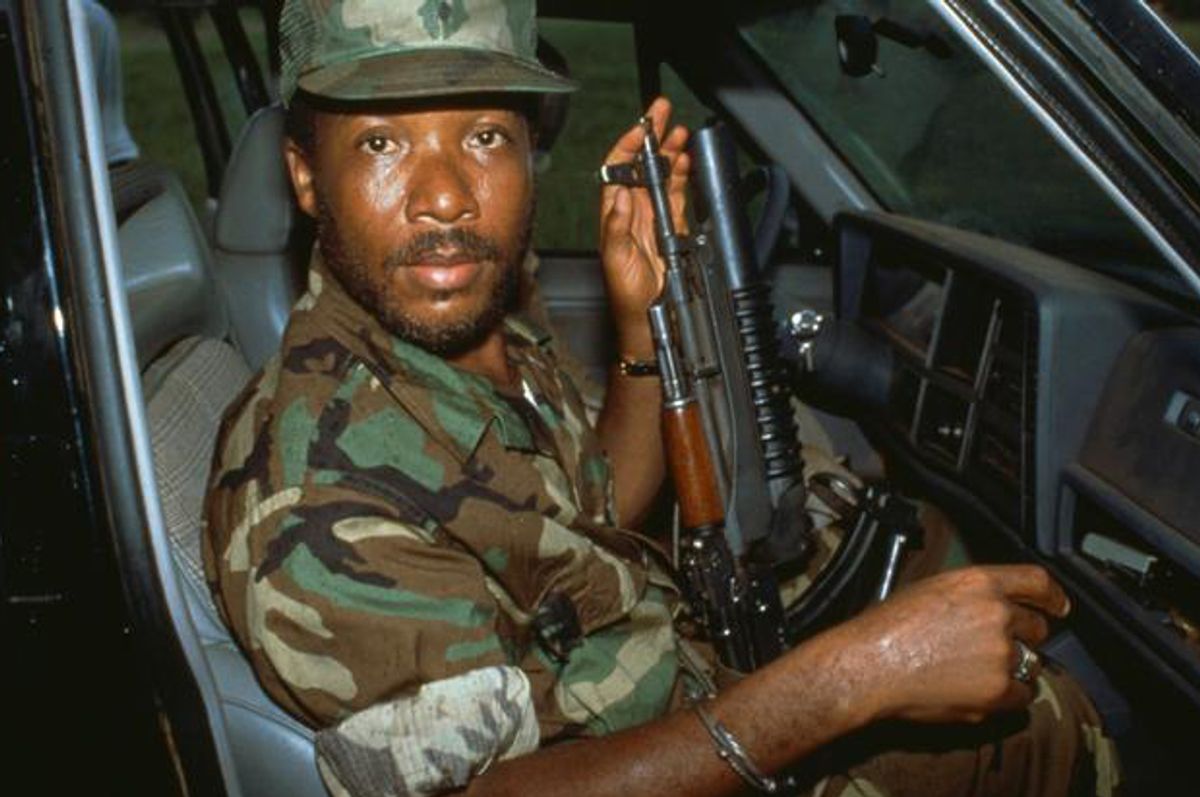 Still from "Frontline: Firestone and the Warlord" (PBS)
--

If you only learned about the continent of Africa through television, you would be forgiven for thinking it was a dangerous, uncharted  and possibly fictional land — along the lines of J.R.R. Tolkien’s Mordor or DC’s Gotham City. It’s not just how little it’s depicted — though that is precious little — but more how it’s talked about. Africa is where white American characters go to find themselves, as in “ER” and “The Newsroom”; it’s where outbreaks of epidemics come from, as depicted on the nightly news; it’s where Americans and Brits go to dismantle terror networks, as happens in “Strike Back” and “24.” And that’s if it’s mentioned at all; Africa is otherwise a vast continent with extraordinarily little said about it except what can fit in hushed, warning tones. As Mike Vago pointed out to me on Twitter, “Even ‘The Amazing Race’ doesn’t spend much time there.”

Tomorrow night, PBS’s "Frontline" will air a 90-minute documentary on a profoundly chilling topic: the complicity of the American tire company Firestone in the regime of Liberian warlord Charles Taylor. That might mean very little to you, or a great deal. It’s a topic that deserves the full 90 minutes, if only because the producers have been so thorough: Firestone officials made a devil’s deal with Taylor, knowing full well the atrocities he had committed and was continuing to inflict on the country, so that the corporation could continue to harvest rubber from its plantation in Harbel, Liberia.

The stories of particular warlords and their specific atrocities tend to blur together, especially in a continent that is so remote and undifferentiated to Americans that multiple politicians have slipped and referred to it as a country. That’s at least one of the reasons why “Firestone and the Warlord,” produced in collaboration between “Frontline” and ProPublica, is so surprising: It pinpoints. Not just Africa; Liberia. Not just Liberia; Monrovia, the capital, and Harbel, the name of the small outpost where Firestone’s rubber plantation was located.

There are, it is easily argued, very good reasons why American perceptions of Africa are the way they are. America isn’t particularly tuned in to most of the world; “India” is that place Americans go to find themselves about as often as “Africa”; Eastern religion is only interesting if it’s been appropriately Californized first; the most interesting part of Latin America is the border between the U.S. and Mexico. Television shows, too, have limited budgets for constructing foreign lands. It’s typically film that takes the viewer on a short trip to the beyond, because it’s typically film that can afford it.

Broadly speaking, most storytelling about foreign parts of the world that's available on television in America is either: 1) Actually from some other section of the English-speaking world (notably, England) and set there, too, like “Doctor Who” and “Downton Abbey”; 2) some pretty place that Americans would like to vacation in, like the time that “Friends” took the whole crew (except Phoebe) to London; and 3) places that America is at war against, because action sequences. So “The Americans” offers glimpses of Soviet Russia, while “Homeland” is about the war on terror.

There are parts of Africa that would be wonderful vacation spots; there are plenty of parts where English is spoken; there are some parts we're even in conflict with, in some capacity. (Incidentally, “Homeland’s" doing most of its third-season location shooting in Cape Town, South Africa.) And yet the range of television depicting Africa has been incredibly limited, especially when you don't include British shows like “The No. 1 Ladies Detective Agency” and “Strike Back.” There’s resistance to seeing Africa as more than an undifferentiated mass, a resistance revealed by our limited television options and the slips of tongue by politicians with power.

Perhaps that’s because for America’s entire existence, Africa has been little more than the region to the east that we exploit for resources and labor. Indeed, one of the things that is so deeply worrying about “Firestone and the Warlord” is how quickly and easily the expatriate Americans and the employed Liberians fell into a slave economy. Firestone’s outpost was called a plantation; its 8,000 employees did hard physical labor for dollars a day and were put up in shanties that up until 2002 didn’t have running water. This plantation, in the late '80s, supplied nearly half of America’s latex. Firestone is just one rubber company; rubber, just one resource that numerous corporations pursue in Africa. “Firestone and the Warlord” offers damning, incontrovertible evidence that Firestone not only paid taxes to Charles Taylor, but was an integral part of his revenue supply — even as thousands of Liberians around the plantation were being quickly and summarily executed.

In “Mad Men,” a mantra the admen repeat to themselves and others is that the clients don’t want to hear about death. It doesn’t matter if the world is falling apart, or if you are, salesmanship requires positivity. Which is why Africa is a dead zone for American entertainment. The client — us — can’t face a narrative of Africa (or Native Americans, or portions of Latin America, the list goes on) without facing an enormous amount of uncomfortable culpability.

And that wouldn’t bother me so much if the flip side of such ignorance wasn’t indifference — the same indifference Firestone shows to the average Liberian in “Firestone and the Warlord.” Entertainment value has a built-in blind spot. Naturally, PBS would step up to fill in the gap, but that’s because PBS is the only network in America that doesn’t have to sell to audiences or advertisers. While “Frontline” continues to do the work it has always done so well, the rest of our television will focus on making our entertaining television about the “bad guys” — anything to distract from the horror of being responsible for what transpires in the dark heart of another nation.