A racial state of emergency: How we prepare for devastation in Ferguson

As we await the inevitable in Ferguson, here's one way for black folks to find joy -- and galvanize the movement 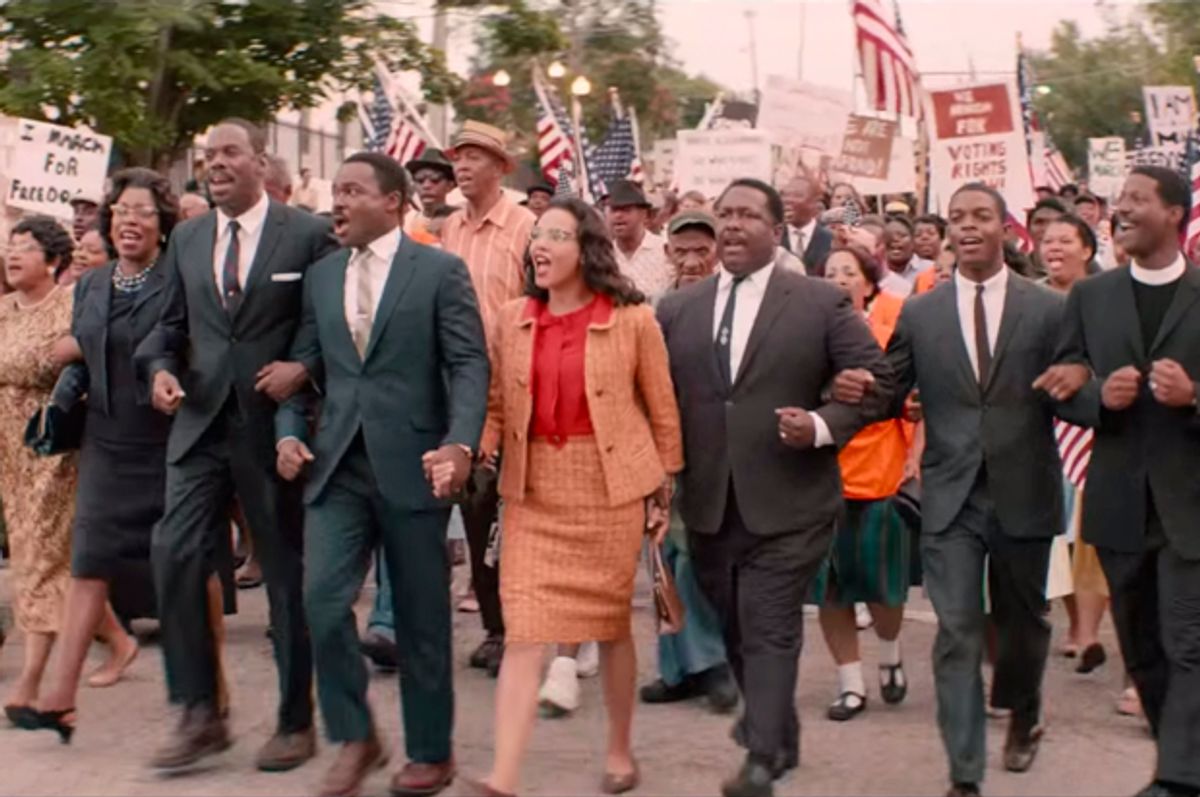 A still from "Selma" (Paramount Pictures)
--

A state of emergency has been declared in Ferguson, Missouri, while a nation awaits a grand jury decision concerning the indictment of Michael Brown’s killer.  That hundreds of thousands of dollars in new military equipment has been purchased by the police in anticipation of the decision suggests that Officer Darren Wilson will get away with his crimes. Ferguson activists have been actively preparing themselves for the inevitable for weeks now, but as young preacher and activist Nyle Fort remarked, “We been ina ‘state of emergency’ since our flesh was stolen from the motherland and used to build a new world.’” While I hold my breath, I have been left wondering – since the state of emergency is altogether “normal” for black folks -- what we do while we wait for inevitable devastation.

One solution is to find joy, to find the signs of life in the midst of copious and mounting black death and anti-black sentiment. For me, this week, I found my joy in an early screening of Ava DuVernay’s “Selma.” It might seem odd to think about what films mean for politics, but since revolutionary politics always ask us to see the world anew, filmic representation matters greatly.

There are films that galvanize movements.  As I sat, watching “Selma,” I knew this film would be one of them. The first major studio film from the first black woman to win best director at the Sundance Film Festival, "Selma" is action-packed, majestic, funny and soul-wrenching all at the same time. This film that centers ordinary, everyday people, in the place where they lived, doing their work, loving on the leaders they chose, fighting to change the world, is a breath of fresh air to a civil rights narrative that so often lionizes Dr. King, positioning him as savior, as Christ, rather than perhaps as a more human, radical, revolutionary Jesus. I never shy away from the Jesus-King comparisons, because I remain clear that there was Jesus and there was Christ, and King was no Christ. But he loved people, and served them, and died for them.

In “Selma,” and it is called "Selma" and not "King" for a reason, DuVernay does not use the civil rights narrative as a generational yoke of discipline, as the rod by which we must measure and correct all subsequent movements for change. The way “Selma” narrates black leadership as an ever-present “translocal” negotiation between national leaders and local ones mirrors back to us the tensions that the young, but maturing movers in Ferguson are currently working out.

The thing about watching historical dramas is that we already know the outcomes. We know who will live and who will die. We know this as we watch five little girls march into a church basement. We watch and we hold our breath. We watch because even when the inevitable faces us on-screen, we are still unprepared for the way the enormity of anti-black violence snatches away our very breath. This is not unlike how so many of us feel in this current “state of emergency” in Ferguson. Though there has been peace interspersed with calculated acts of civil disobedience on the ground, the governor has, in anticipation of a grand jury decision most likely favoring Darren Wilson, already declared a “state of emergency” deputizing the police in any way they deem necessary to respond to the violence we all anticipate.

We hold our breaths. We wait for the explosion. Of police weapons – of their tear gas canisters, their stinging rubber bullets, their hundreds of thousands of dollars of new artillery, that will be brought out to intimidate citizens. We wait, reminded that we are unprepared, because one can never prepare to accept violence to our personhood.

To riff on philosopher Giorgio Agamben’s notion of the “state of exception,” in which because of a crisis, protocol is suspended and extreme shows of force are sanctioned, this “state of emergency” in which black folks live is only remarkable in this moment because it has been named and made visible. To exist under a constant and never-ending “state of emergency” is a hallmark of black life. It is decidedly unexceptional. It is no way to live. And yet black folks each day make a way out of no way.

In the meanwhile, DuVernay has given us “Selma.” It is a reminder,  “a preparation,” of sorts, as one of they key scenes in the film argues, that we have overcome this kind of thing before. We have faced down rabid police, who serve themselves by slaughtering us. We have faced down state-sanctioned, systemic humiliation and hopelessness – and won.

To attend a screening of this film, while I hold my breath, is a kind of mundane thing, not unlike the way that DuVernay shows us everyday people, living, and loving, and tending children, and building friendships, in the midst of creating a movement. In our ever-present state of emergency, we go on living. While we build a revolution, we go on living.

With love, DuVernay demonstrates the indomitability of black spirit. She holds intact the men who led, while showing us the women who loved them, and lovingly fed them, and challenged them, and brokered back-door deals like only the women can.  I hope when the women who are leading the efforts in Ferguson see this film, they see themselves, feel, for once, recognized.

This director works with a team that understands how to light black bodies on-screen, so that the rich complexity of black skin and black selves come through, whether in a jail cell, kneeling on a bridge at Selma or working on a sermon in a dimly lit backroom. Perhaps it seems uncritical to speak about the politics of love that undergird DuVernay’s filmmaking, but anti-blackness is real and pervasive. It shows up even in films by black directors, through the inability to see, appreciate and celebrate black humanity, in the resistance to acknowledging all the ways in which black people save themselves and each other each and every day.

Representations matter, and filmic representations that grow from a combination of masterful skill, artistic integrity, creative genius and love for black people make films like “Selma” possible. This film tells the truth. It does so without making black angels or white demons. And while we work to dismantle systemic anti-blackness, we would be remiss to do so, if we do not dismantle the anti-black structures of feeling – the demons that live inside of us -- that inhere in every breath we take, that have seeped into our pores simply because we live here within these borders. Revolutionary visual representation is necessary to that process.

The film stridently refuses a great white savior narrative, giving us instead Lyndon Johnson’s drudging and beleaguered march toward protecting the black vote. Johnson’s journey was not so much one of courage, as it was power being forced to concede something to the demands and strategic sacrifices of the people of Selma.  Among a spate of recent historical films including “The Butler,” “12 Years a Slave” and “Belle,” that simply could not resist the vaunting of white men, DuVernay makes clear that the real heroines are women like Amelia Boynton and Diane Nash, a young John Lewis, and the gentle but stalwart Jimmie Lee Jackson.

And then there is David Oyelowo as King. The British actor nails King’s signature Southern accent and black Baptist preacher cadence, but his best scenes are not even in the pulpit. Those scenes are masterful to be sure, but Oyelowo shows us King’s swag in negotiating with SNCC leaders, his resolved, forceful, principled engagements with LBJ, and his tender encounters with the people of Selma in their toughest moments.

“Selma,” a movie about the epic struggle for the vote, is a movie for such times as these. Times when voter protections become the ghost of seasons past. Times when we hold our breath, afraid not of our own rage or potential for brutality, but of the magnitude of white rage, the potency of white brutality, the irrationally strong resolve of those committed to the politics of racial repression. This is a historical film, and as such, it tells us where we have been and who we have been. And yet, there is a surreal feeling that this is not a historical film at all. We are 50 years past Selma, our historical baggage kicking up red clay dirt all around us.

“Selma” is the kind of film that will cling to you, stick to your bones, sit on your heart heavily, much like the dust of the back roads on which much of this story takes place. There this story duels with all the messages that suppress the revolutionary selves we are trying to be, the selves that emerge urgently, in the midst of a state of emergency. There are films that galvanize movements, because they move us, because they show us what is possible. This film does that. It gives us joy in the midst of our struggle. It gives us love in the midst of pain. It is the Frankie Beverly to our Maze, the Rob Base to our DJ Eazy Rock.

It gives us sermons, and political soliloquies, and moral conflicts of the highest order. It places the truth of who we as a people and a nation hope to be, but consistently fail to be front and center. But it never preaches. Ava DuVernay respects us too much for that. She simply offers us the gift of looking into the past -- and the future. Films can only do so much. The rest of this movement is up to us.