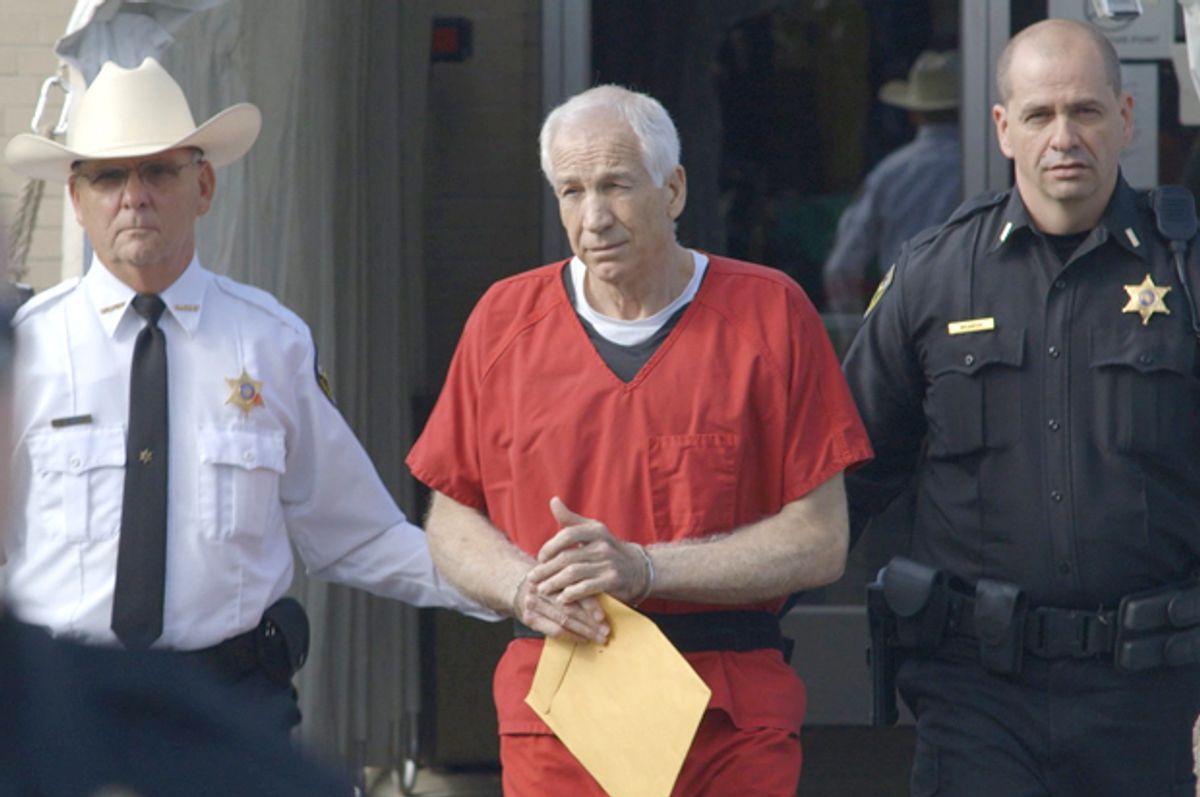 When I first saw Amir Bar-Lev’s documentary “Happy Valley” at Sundance earlier this year, I wrote that we haven’t learned whatever lessons we were supposed to learn from the sexual abuse scandal at Penn State, and we haven’t answered whatever questions we were supposed to ask. Months later, in the wake of Ray Rice and Adrian Peterson and amid a general sense that America’s most beloved and distinctive sport is in crisis, the interlocking histories of Jerry Sandusky and Joe Paterno and Penn State’s imploding football program look murkier than ever. (This article incorporates elements of my earlier review, but has been extensively revised.)

Even before the first screenings of “Happy Valley” last winter, Penn State defenders had mounted a counterattack of sorts. The sex abuse scandal was about one individual, according to this line of argument; it did not and should not reflect on the legendary Nittany Lions football team, Paterno’s long and successful coaching career or the Keystone State’s foremost public university. This form of denial reaches its tragic and/or absurd fulfillment in the person of Dottie Sandusky, who continues to insist that her husband, Jerry, is innocent, despite his convictions on 45 counts of child abuse after a trial that featured the testimony of eight adult men who said that Sandusky raped or molested them as children. (Jerry Sandusky is currently serving a 30-to-60-year prison sentence.)

As a recent report by Eric Kohn of Indiewire details, Dottie Sandusky has allied herself closely with a Penn State “truther” named John Ziegler, who views Bar-Lev’s film with particular rancor. In an email to Kohn that Ziegler has published on his website, he describes “Happy Valley” as “obviously fraudulent” and characterized by “ignorance, arrogance, cowardice and incompetence,” although he makes no specific allegations. Ziegler has himself made a 30-minute film called “The Framing of Joe Paterno,” which those interested in spelunking down this particular rabbit hole may watch on YouTube. He previously directed a documentary about the 2008 election titled “Media Malpractice,” and you get exactly one guess how that film interprets the election of Barack Obama.

Here’s where the Penn State story stops being about football or sexual abuse or one renegade coach no one wanted to look at too closely and starts being about the cultural gulf in America – which is exactly the point of “Happy Valley” as I understand it. Ziegler began with the position that Paterno, Penn State’s longtime coach and an iconic figure in college football history, was unfairly punished, scapegoated and hounded to his death for crimes he did not commit and never quite understood. While I don’t think anything about this case can be boiled down quite so neatly, that’s not an inherently unreasonable point of view. But how Ziegler got from there to the ludicrous contention that Sandusky isn’t guilty either I’m not quite sure.

Jerry and Dottie Sandusky have contended all along that the numerous young men who have come forward to describe how Jerry abused them – who include their own adopted son, Matt Sandusky – are hustlers looking for a payday. Penn State has indeed paid out millions in civil settlements to those men, a fact that appeals to a certain kind of right-wing paranoid fantasy: Today’s generation is avaricious and immoral, and wants everything handed to them on a platter. Jerry Sandusky was an old-school coach from another era who liked to shower with his charges; maybe they misinterpreted a certain amount of “horseplay.” (The kind of horseplay that involved the forcible rape of children, for example.) It would almost be funny if it weren’t horrifying. I am not suggesting that anyone in the right-wing media (beyond Ziegler) claims that Sandusky was a victim of the Obamabot political-correctness police and the video-game generation, only that everything about the Penn State scandal is seen through a cultural and political prism and there’s no point pretending otherwise.

Those who seek to protect the reputation of Penn State football have a point, though not quite for the reasons they think. The real story is not smaller than Penn State, but much larger, or so argues Bar-Lev, previously the director of “My Kid Could Paint That” and “The Tillman Story” (about NFL player turned Army Ranger Pat Tillman, who died in a friendly-fire episode in Afghanistan). “Happy Valley” does not try to lead you to any firm conclusion about who or what is to blame for what went wrong in the football-crazed farmland of central Pennsylvania, and viewers with different perspectives will understand it in different ways.

That ambiguity is captured in a single person, Matt Sandusky, who has been traveling around the country with Bar-Lev and has become an articulate spokesman on the subject of child abuse, especially within families. Matt says in the film that when investigators first showed up after his dad’s arrest, he told them that nothing like that had ever happened to him and that he couldn’t imagine the senior Sandusky doing such things. He was ashamed about what had happened to him, of course, and didn’t want to talk about it. When Matt later came forward to speak about enduring long-term sexual abuse throughout his childhood, it marked the final blow against Jerry Sandusky in the court of public opinion. (In the end, Matt did not testify against his father because it clearly was not necessary.)

Matt Sandusky says that he felt that his loyalty and responsibility lay with the family no matter what, and Bar-Lev’s film suggests that many people in Happy Valley — the bucolic region surrounding Penn State’s hometown of State College — felt the same way. Penn State loyalists claim that the university and its community are not to blame for the long-term criminal conduct of an employee, a man who was surrounded by uneasy whispers for years but who was also the subject of glowing TV reports about his charity, that showed him frolicking in a swimming pool with a gaggle of preteen boys.

While the rest of us may wag our fingers at that level of hypocrisy and willful blindness, society did something similar, on a grander scale. After Sandusky’s convictions, Penn State was treated as a national pariah, hit with a $60 million fine and forced to forfeit 13 years of football victories, based on the premise that it had put athletic accomplishment above ethical conduct. As if that were somehow unique among American universities! Here’s the parallel: People in Happy Valley tried to blame Penn State’s problem on Jerry Sandusky, and people in America tried to blame the problems of big-time college sports on Penn State.

By compressing the story into less than two hours, Bar-Lev reminds us that Penn State’s collective attempt at self-reckoning was tormented, melodramatic and bizarre. Angry street protests followed Paterno’s abrupt firing, with students chanting his nickname (“We want JoePa!”), overturning a TV crew’s van, smashing windows and attacking reporters. A few months later, after it became clear that Paterno had known about at least some of the abuse allegations against Sandusky as early as 1998, he was deemed a nonperson in a Soviet-style purge. Paterno’s shrine-like statue outside Beaver Stadium, which had become the site for tense encounters between his devotees and detractors, was torn down and replaced with a nondescript grass berm. Within a few months of his ouster, the heartbroken coach died of cancer.

None of this, needless to say, amounted to a real grappling with history, or with the underlying cultural forces that allowed a sexual predator like Jerry Sandusky to flourish for so long amid the most wholesome, all-American environment imaginable. Personally, I don’t find it strange that Joe Paterno didn’t know how to deal with the troubling reports about Sandusky. Both men came from a generation when such things weren’t talked about in public. While it’s clear that Paterno didn’t do as much as he should have to stop Sandusky -- and Paterno apparently admitted that to biographer Joe Posnanski before his death -- he remains a towering cultural figure of the 20th century, one who saw nearly all his players leave school with diplomas and who tried to stand for the best tradition of college athletics. If there’s a disturbing contradiction between those things, it is best faced directly. Penn State’s leadership sacrificed Paterno in a vain effort to keep their jobs and escape prosecution for their own failings, but they can’t erase him from the history of college football any more than Stalin could erase Trotsky from the Russian Revolution.

The set of failures that allowed Sandusky to abuse children went well beyond Paterno and Penn State and throughout a community that declined to look too closely at a leading local celebrity. Anyone who says the same thing couldn’t have happened at Alabama or Florida State or Oklahoma or any of two dozen other football-mad schools — indeed, anyone who claims to know for sure that it hasn’t happened — is kidding themselves. I’m not claiming there’s some obvious solution to the hive-mind, groupthink, blame-the-media mentality we see in “Happy Valley,” which seems like an element of human psychology that’s not limited to Penn State or college football or America. One local lawyer says in the film that Sandusky’s predilection for young boys was an open secret, while Paterno’s wife and sons take the position that everyone in State College was duped by an insidious pedophile genius. Both of those things cannot be true, logically speaking. What’s definitely true is that nobody in Happy Valley wanted to hear anything bad about the demigods who ran their football team, until it became necessary to pull down their idols and cast them out of the temple.

"Happy Valley" is now playing at the Village East Cinema in New York, and opens Friday at the Royal Theatre in Los Angeles and the ArcLight La Jolla in San Diego. It opens Nov. 28 in Chicago; Nov. 29 in Pittsburgh; Dec. 5 in Coral Gables, Fla., San Francisco, Santa Fe, N.M., and Columbus, Ohio; and Dec. 12 in Palm Springs, Calif., and Santa Ana, Calif., with more cities to follow. It's also available on demand, beginning Friday, from cable, satellite and online providers.