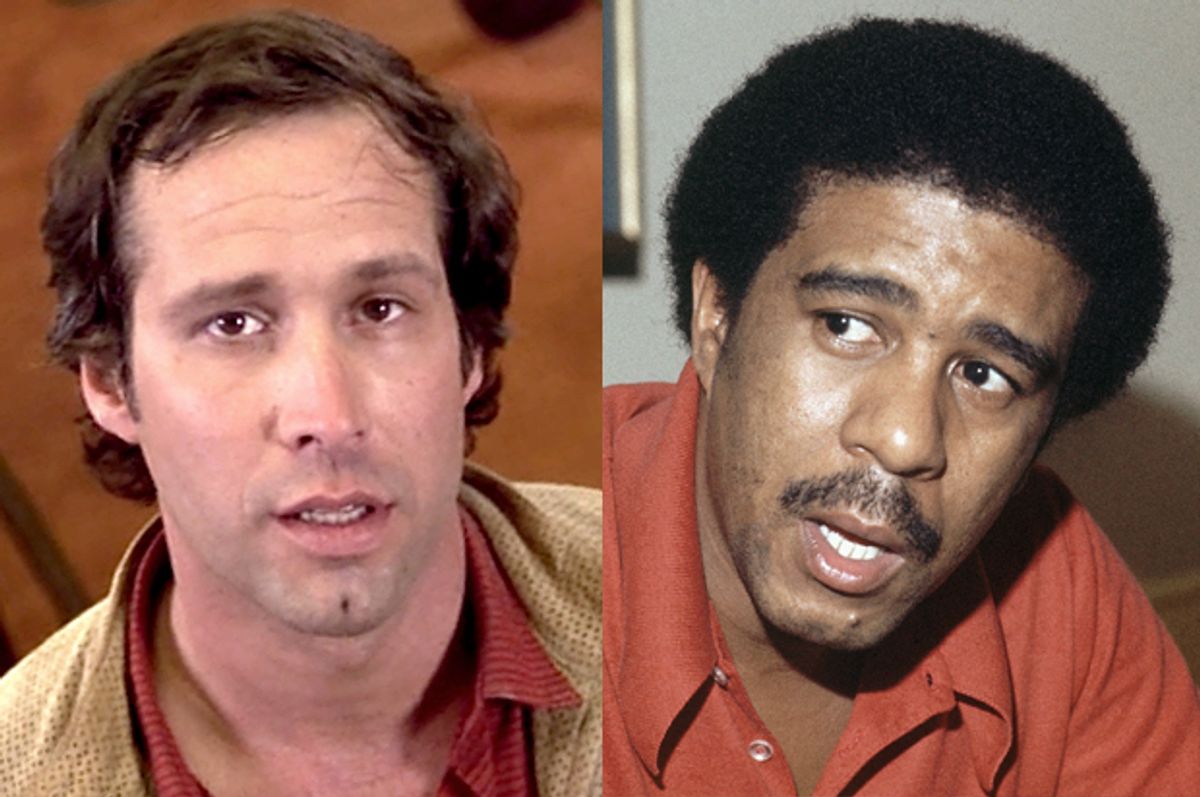 You need a great gift. We have excerpts from some of the season's biggest entertainment biographies and memoirs all day -- guaranteed perfect for someone on your list.. Excerpted from "Furious Cool: Richard Pryor and the World That Made Him"

Richard had sworn off appearing on talk shows six years earlier because, as he said, there would always come a point in the conversation when the host would turn to him and say, “Isn’t America wonderful, Richard?” And he would have to say, Yes, Merv/Mike/Joey/whoever, it sure is. Then the host would say, “See, guys? He said it. What’s the matter with the rest of you?”

On May 4, 1977, Richard and Chevy Chase both went on the Tonight Show to plug their respective TV specials, airing back-to-back on NBC the following night. Chase had left Saturday Night’s midway through its second season to pursue a solo career. Carson and Chevy only met for the first time the previous day. Although he was noticeably cool toward Chase, Carson could barely conceal his glee over Chase’s painfully inept performance, as the comic actor, visibly flustered, stumbled over even the simplest questions groping for witty replies but coming up with none.

Carson asked Chevy to demonstrate, for the benefit of folks at home who may not have seen it, the pratfall that made him famous on Saturday Night. Using a chair and a glass of water for props, Chase gives an overlong introduction, explaining what it is he’s about to do, what makes it funny, then instructs the audience (growing noisy and restless) on the proper way to land when taking a fall. Finally he does it. Applause. As he steps up onto the riser, returning to his chair, he trips and falls again.

Chevy became less tongue-tied once Richard came out and took the guest chair next to Johnny. Being pushed out of the spotlight seemed to energize Chevy. His comic style being better suited to the role of a sideline taunter than ball carrier, he kept leaning over from the couch into Richard’s frame and repeatedly interrupted with ineffective wisecracks. After suffering a number of verbal smack-downs from Richard—with the audience clearly on Richard’s side—Chevy attempted to make amends by saying that he had seen Richard’s special and that it was “hilarious. Not quite as funny as mine, but, really, it’s quite good.” Richard remained unmoved. When Johnny asked Richard if he’d seen Chevy’s special, he answered, “I don’t like Chevy.”

Carson went to a station break. When they came back, he asked Richard if he ever went back to visit Peoria. As a matter of fact, he told Johnny, he was going back that very weekend to spend Mother’s Day with his grandmother and to see his son perform in a talent show. When Johnny asked Richard what his son’s talent was, Chevy interrupted his answer by saying, “He’s a hooker.” Richard turned on him.

Richard: What was it you said?

Oooohs from the audience.

Chevy: I knew you’d bring that up and Johnny and I we’ve discussed it and neither of us cares.

Richard: That monologue you were doing with the chair is a perfect replacement for Johnny.

Chevy:  A lot of chair falls. “My opening monologue will be a fall over a chair tonight, thank you very much.”

Richard: I’ve got mine. I love show business. That’s the only reason I’m in.

More oooohs from the audience at the punch he’d just landed.

It’s informative—and fun—to see Carson’s bemusement as he watches the two men spar. Carson had put in his time, honing his craft for more than a quarter-century starting out at a local radio station in Omaha, emceeing church dinners, hosting variety shows, and quiz shows before getting his own sketch comedy show, Carson’s Cellar at KNXT, the Los Angeles CBS affiliate, in 1951. He wrote for Red Skelton and hosted more game shows before finally achieving success with Who Do You Trust? on NBC in New York. He did that for six years before being tapped to host The Tonight Show. And now people at the network—important people—thought this clod had the chops to take over his job? Chevy Chase, the overnight sensation who’d been hired on as a writer for Saturday Night then added to the cast at the last minute despite having so little experience beyond performing in a few improv comedy troupes and providing voice talent on the National Lampoon Radio Hour? They wouldn’t think so after tonight.

The excitement over Richard and his special was palpable within NBC even before the show aired and the reviews and Nielsen ratings came pouring in. The network rushed to sign him to a weekly comedy-variety series for the coming fall season. “The terms of the contract were almost unprecedented in television,” said network publicist Kathi Fearn-Banks, and NBC was taking a real chance.” Their attitude was, “Let’s get him before somebody else does.”

“They offer what he calls ‘bad money,’” Mooney writes. ”So much cash that he can’t refuse it: $2 million a year. ‘What am I going to do, Mr. Mooney?’ I know him well enough to know he’s not really asking. The answer is already clear. ‘You’re gonna take the fucking money and run,’ I say.”

The irony is that Richard—the child in Richard—still believed in the transforming power of television. “One hundred and twenty-seven million people watch television every night,” he said at the time. “One week of truth on TV could just straighten out everything.”

The framing device for the special has a clean-shaven, tuxedoed Richard striding through the hallways of NBC between sketches as various characters accost him with suggestions for the show. LaWanda Page, who he’d known since her fire dancing days on the Chitlin’ Circuit, essentially revamped her Aunt Esther persona from Sanford and Son to play Sister Mabel Williams, his “sister’s aunt’s cousin on your father’s side. I’ve known you since you were a baby.” Richard doesn’t remember her. “It’s so good to see you having your own show. All my years of prayin’ for you finally paid off.” All she demands of him in return is that he give his holiness the Rev. James L. White a primetime spot on his show.

Richard’s Rev. White, a funkier, more media-savvy incarnation of his signature minister character, descends a grand spiral staircase in a gold-trimmed white jumpsuit and enormous afro as the choir sings ”For the Love of Money.” Behind him, church volunteers wait by the mostly silent phones for viewers to call in with their donations. The church’s financial problems, White says, are due to not getting the “crossover bucks.”

Mooney cast poet Maya Angelou—formerly a singer, dancer, and actress—as the long-suffering wife of Richard’s wino character “Willie” who, after an extended sketch in a neighborhood bar, makes his way across the street to his house. He stands reeling for a moment before climbing the front steps. “Please God, don’t let me be sick. Get me though this one and I’ll get through the next one myself.” Willie staggers past his wife and collapses face-down on the couch where he remains, dead to the world, as Angelou delivers a wrenching monologue recounting her life with Willie, what he once was and what he has become. Angelou wrote the monologue herself and, as Mooney says, “it gets to the soul of what goes on.” After her first run-through in rehearsal, studio crew members were in tears.

Richard’s concept that the show should give voice to those who are seldom heard is most poignantly expressed by his musical guests, “And the Pips,” minus front woman Gladys Knight. Richard brought background singers Merald Knight, Edward Patten, and William Guest out of the shadows and gave them the spotlight to perform their backup harmonies and synchronized dance moves to “Heard It Through the Grapevine” and “Midnight Train to Georgia,” while an unattended microphone marked the spot where Gladys commanded centerstage.

Five days after his special aired, Richard signed an exclusive five-year personal services contract with NBC to do a weekly series of at least ten shows, star in two specials, and serve in a creative capacity on a third special that would function as a showcase for new talent. For this he would receive $750,000. After the first year, he had the option to cancel the deal or renegotiate for more money for the next four years.

That same month, lawyer David Franklin renegotiated his Universal contract for five more movies and more money. Richard signed to do Paul Schrader’s Blue Collar, play the title role in The Wiz, and costar with Jackie Gleason in a proposed sequel to The Sting, a film that never came to be.

Franklin kept handing him more contracts to sign, more than he could possibly keep track of, even if he’d tried.

By mid-summer, David Franklin brought Richard yet another multi-picture deal, this time with Warner Brothers, calling for him to star in, at minimum, four movies over the next four years, with the understanding that the studio would share Richard’s services with Universal on an alternating basis. The films were to be jointly produced by Warner Brothers in association with Richard Pryor Enterprises, with Franklin as executive producer, at a guaranteed one million dollars per film plus fifty percent of the profits.

David Franklin had been a godsend. (In actuality it was singer Roberta Flack who sent him to Richard.) The Atlanta-based attorney straightened out Richard’s finances, renegotiated contracts, made certain he was paid his various royalties on time, retired Richard’s more than six hundred thousand dollars in outstanding debt, settled his alimony and child-support obligations. Further, Franklin established Richard Pryor Enterprises as a corporation to ease his tax burden, and Black Rain, a production company named for Richard’s youngest daughter. He also encouraged Richard to move out of his Hollywood Hills bungalow and buy himself a house. Which he did, a Spanish villa with two guest houses situated on an eight-acre estate in the Northridge section of the San Fernando Valley with the Santa Monica Mountains providing a natural fortification against Hollywood.

Franklin’s associate, Michael Ashburne, recalls that Richard went to the bank one afternoon and withdrew a million dollars. He took the cashier’s check down the street and deposited it in a different bank. When Ashburne asked him why he’d done such a thing, Richard said, “I wanted to see if the money was really mine.”

Richard told an audience that if his father were alive and “I told him how much money I had, he’d say, ‘Boy, you’s a lyin’ motherfucker! Joe Louis never made that much money.’”

When he appeared on the Tonight Show to promote his special, Richard announced that he would be in Detroit later that month filming Paul Schrader’s Blue Collar, a story about auto assembly line workers. Then he issued an advisory to that city’s police: “I’ll be jogging in the morning, police, me and Rashon, two black men, we‘ll be jogging, we’re not robbing anyone, do not shoot us accidentally as we’re jogging in the streets of Detroit.”

“You have to announce these things,” Richard told him.