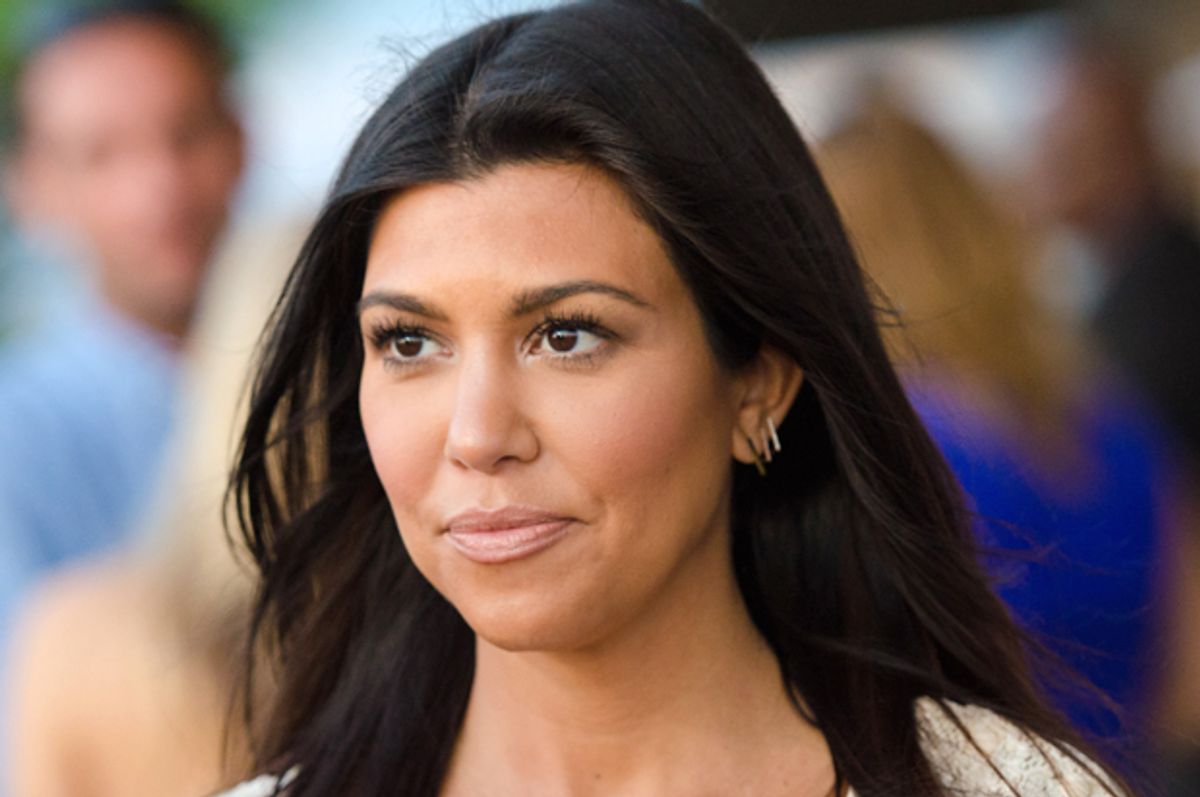 Believe it or not, there was a time when being pregnant and famous did not require a woman to pose naked. Not that there's anything wrong with that. But when you look at those undressed-Kardashian-of-the-week photos of nine months pregnant Kourtney in DuJour, it's hard now to think anything but, "Of course she's not wearing clothes."

The reality star, who also posed nude when she was pregnant with her first child, offers the standard message of disrobing as empowerment in her interview, explaining, "Nudity is not something to be ashamed of. I’m not embarrassed of my body. I’m at my best when I’m pregnant…. What appeals to me is celebrating the shape of my body being pregnant and capturing that time in my life." And though she says, "I don’t think so, no," when asked if she'd pose nude when not pregnant, if she stays true to form she'll no doubt be doing the inevitable post-baby body bikini series of magazine covers that she managed to swing after her last two pregnancies.

No one in their right mind would wish for a return to the days when a woman's pregnancy was an all but taboo event, when even famous and beautiful women found themselves cloaked in heinous maternity garb. But something shifted dramatically the moment Demi Moore, clad in just diamonds, strategically placed hands, and a giant belly, graced the cover of the August, 1991 Vanity Fair. And while it's clearly great that pregnant women are no longer viewed entirely as sexless, frumpy baby vessels, the implication that they're now instead hot, hormonal mamas isn't super helpful to womankind either.

The Moore photograph was scandalous in its time – and it been widely imitated ever since. If you're a celebrity and you've been impregnated in the past 23 years, you've probably done the same pose. Cindy Crawford did it. Britney did it. Jessica Simpson did it. Mariah Carey did it. Christina Aguilera did it, but with a jacket. It's a simple celebrity formula. Just cover the nipples with the hand and keep an arm around the pubic area.  Stand sideways, so we get the full effect of your swelling belly. And for God's sake, don't smile. Look sultry and smoldering and super do-able. In the accompanying interview, mention, like Kendra Wilkinson did, how "I feel more beautiful than ever." Throw in a line about how your man thinks you're incredibly sexy lately. Make sure there are no sags or stretch marks visible. Enthuse, like Khloe Kardashian, that "It’s such an amazing feeling, the transformation that your body goes through…. It’s what a woman’s body is made to do." Just like a woman was made to do a photo shoot in a feather necklace, I guess.

Next, have a baby. Make sure you are not seen or photographed in any state of post baby squishy belly deflation. The moment that kid is out of you, that gorgeous stomach you bared on magazine covers, the one everybody seemed to love, is the enemy. It's out of commission until it's flat and bikini ready. Try to achieve this in the shortest amount of time possible. Don't go anywhere until you're positive the word "flaunts" will appear next to your name. Be specific about the number of pounds you lose. In the meantime, though, if you can swing it, maybe work in the newest addition to the hot mom photo pantheon -- an incredibly glamorous image of you breastfeeding your perfect child. Make a few laughing references to how tired you are, but add the usual stuff about how you've never felt more fulfilled, and how just keeping up with the baby is helping you melt off all the weight. Nailing it!

It's understood that magazine covers and celebrity photo shoots are not designed to present an accurate picture of what people – even well-paid, genetically blessed people – look like. And yes, pregnancy is an often beautiful, vibrant, exciting time in a woman's life. (It's also often a vomit-fueled era of heartburn, anemia and cankles.) It's great to champion the notion that a rapidly expanding woman can be proud of her body. But what stinks it that there is no room in that narrative for the messy truth of that period afterward, when the body is reinventing itself. There is certainly no room in it for a woman who takes her sweet time getting back to full flaunting mode. Instead, motherhood is treated as a means of making a celebrity seem both relatable and aspirational to other women, and perpetually desirable to men. A career move. And it is demented that we have now managed to make a prevailing, expected public story of the magical trajectory from ripe, golden pregnant sexpot to shredded abs post baby body goddess. Worse, we've made it a cliché.