The superstar takes on pregnancy -- and loss 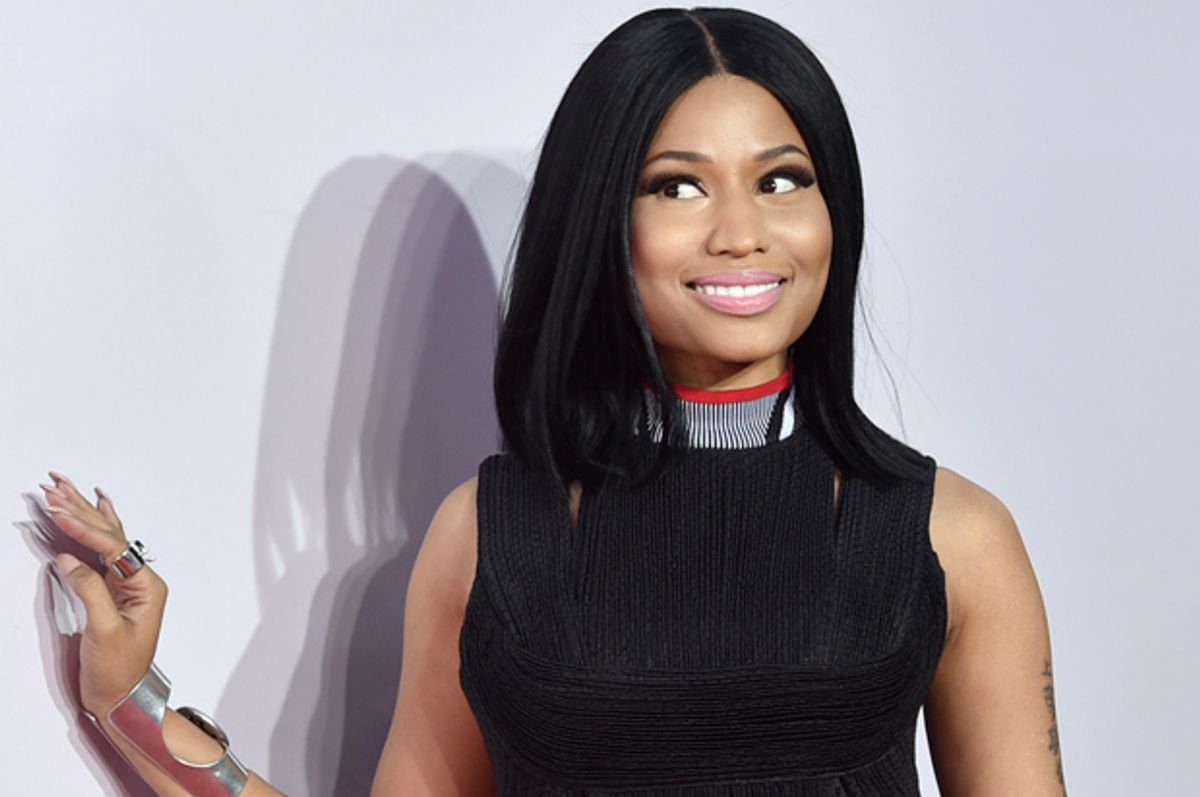 There are few things in this world more provocative than authentic vulnerability. So to close out a banner career year in which she pushed buttons, smashed the charts, took a brief detour into some very unfortunate Nazi imagery and helped usher in the greatest renaissance in the history of booty, Nicki Minaj has at last unleashed the tracklist for her new album "The Pinkprint" -- and a stripped-down song about family and loss – and what seems to be a reference to an adolescent abortion.

Opening track "All Things Go" is a radical departure from the album's earlier, bouncier tracks like "Anaconda." On it, Minaj speaks of her mother, Carol, and her teenage brother Micaiah (Caiah), rapping that "The more I work, the more I feel like somehow they're neglected. I want Caiah to go to college, just to say we did it." She mentions accepting a marriage proposal 10 years ago, and how "I lost my little cousin to a senseless act of violence." But in the most intimate verse, she describes how "My child with Aaron would have been 16 any minute, so in some ways I feel like Caiah is the both of them. It's like he's Caiah's little angel, looking over him."

The 31 year-old Minaj, who would have been around 15 at the time of the pregnancy she references, has not elaborated on the identity of "Aaron," or whether she had a miscarriage or abortion. But she has said on Twitter that "All Things Go" is the "most emotional" track on the album. And in her 2008 track "Autobiography," from "Sucka Free," she devoted an entire verse to the same subject, saying, "Please baby forgive me, mommy was young, mommy was too busy trying to have fun. And now I don't pat myself on the back for sending you back, 'cause God knows I was better than that to conceive then leave you. The concept alone seems evil; I'm trapped in my conscience."

One woman in three will have an abortion in her lifetime. Yet even among those who are strongly supportive of reproductive freedom, coming out about having an abortion is still often taboo. Women fear – and not without justification – that they will be shamed and stigmatized for their choices. For a superstar like Minaj to even allude to a personal experience with the subject matter is a bold step. For her to go further and speak from a place of complicated emotions, to refer to "my child" as an "angel," is even bolder.

Choice is not a one size fits all experience. The reasons that women take the step to end their pregnancies and the feelings they have connected to that decision run a gamut as diverse as womankind itself. For some, it's a no-brainer. It's pure relief. For others, there's a tough internal debate. And for still others, choice is an ongoing presence, a lingering question, a vision that, as Minaj says in "Autobiography," makes them "wish I could touch your little face or just hold your little hand." It's important for all of us, on all sides of the conversation about abortion, to acknowledge and understand that, to admit there's sometimes sorrow. Because choices that can lead a woman to ponder what could have been are still choices that must be protected. A decision that may be hard for a woman to make must still be her decision. It has to be, so that she has the freedom to envision the scenario when, as Minaj says on "All Things Go," "Seven years from now, I’m taking my daughter to preschool." And it's why her candid, emotional track isn't just a poignant song that shows a different side to the artist, it's a righteous and very real anthem to the choices that women make.